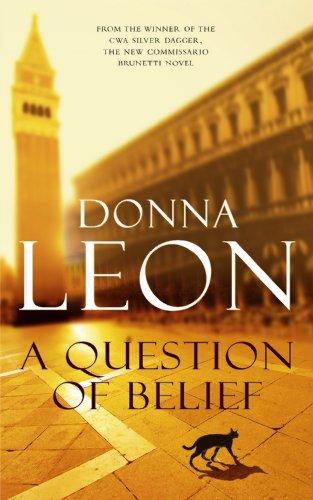 A Question
of Belief

Donna Leon has asserted her right under the Copyright, Designs andPatents Act, 1988 to be identified as the author of this work

This book is sold subject to the condition that it shall not, by way of trade orotherwise, be lent, resold, hired out, or otherwise circulated without thepublisher’s prior consent in any form of binding or cover other than that in whichit is published and without a similar condition, including this condition, beingimposed on the subsequent purchaser

Addresses for companies within The Random House Group Limitedcan be found at:
www.randomhouse.co.uk/offices.htm

The Random House Group Limited supports The Forest StewardshipCouncil (FSC), the leading international forest certification organisation. All ourtitles that are printed on Greenpeace approved FSC certified paper carry the FSClogo. Our paper procurement policy can be found at:
www.rbooks.co.uk/environment

Death at La Fenice
Death in a Strange Country
The Anonymous Venetian
A Venetian Reckoning
Acqua Alta
The Death of Faith
A Noble Radiance
Fatal Remedies
Friends in High Places
A Sea of Troubles
Wilful Behaviour
Uniform Justice
Doctored Evidence
Blood from a Stone
Through a Glass, Darkly
Suffer the Little Children
The Girl of His Dreams
About Face

The villain believes that with fraud
He can hide his wickedness.

When Ispettore Vianello came into his office, Brunetti had all but exhausted the powers of will keeping him at his desk. He had read a report about gun trafficking in the Veneto, a report that had made no mention of Venice; he had read another one suggesting the transfer of two new recruits to the Squadra Mobile before realizing his name was not on the list of people who should read it; and now he had read half of a ministerial announcement about changes in the regulations concerning early retirement. That is, he had read half, if that verb could be applied to the level of attention Brunetti had devoted to the reading of the entire document. The paper lay on his desk as he stared out his window, hoping someone would come in and pour a bucket of cold water on his head or that it would rain or that he would experience the Rapture and thus escape the trapped heat of his office and the general misery of August in Venice.

Deus ex machina
, therefore, could have been no more welcome than was Vianello, who came in carrying that day’s
Gazzetta dello Sport
. ‘What’s that?’ Brunetti asked,
pointing to the pink newspaper and giving unnecessary emphasis to the second word. He knew what it was, of course, but he failed to understand how it could be in Vianello’s possession.

The Inspector glanced at the paper, as if himself surprised to see it there, and said, ‘Someone dropped it on the stairs. I thought I’d take it down and leave it in the squad room.’

‘For a minute I thought it was yours,’ Brunetti said, smiling.

‘Don’t scorn it,’ Vianello said, tossing the paper on to Brunetti’s desk as he sat. ‘The last time I looked at it, there was a long article about the polo teams out near Verona.’

‘It seems. I think there are seven polo teams in this country, or maybe that’s only around Verona.’

‘With ponies and the white suits and hard hats?’ Brunetti could not prevent himself from asking.

Vianello nodded. ‘There were photos. Marchese this and Conte that, and villas and
palazzi
.’

‘You sure the heat hasn’t got to you and you’re maybe mixing it up with something you might have read in – oh, I don’t know –
Chi
?’

‘Nobody reads
Chi
,’ Brunetti agreed, for he had never met a person who would confess to doing so. ‘The information in the stories is carried by mosquitoes and seeps into your brain if you’re bitten.’

‘And
I’m
the one affected by the heat,’ Vianello said.

They sat in limp companionship for a moment, neither of them capable of the energy necessary to discuss the heat. Vianello leaned forward to reach behind himself and unstick his cotton shirt from his back.

‘It’s worse on the mainland,’ Vianello said at last. ‘The guys in Mestre said it was 41 degrees in the front offices yesterday afternoon.’

‘I thought they had air conditioning.’

‘There’s some sort of directive from Rome, saying that they can’t use it because of the danger of a brown-out like the one they had three years ago.’ Vianello shrugged. ‘So we’re better off here than in some glass and cement box like they are.’ He looked across at the windows of Brunetti’s office, thrown open to the morning light. The curtains moved listlessly, but at least they moved.

‘And they really had the air conditioning off?’ Brunetti asked.

‘That’s what they told me.’

‘I wouldn’t believe them.’

They sat quietly until Vianello said, ‘I wanted to ask you something.’

Brunetti looked across and nodded: it was easier than speaking.

Vianello ran his hand across the surface of the newspaper, then sat back. ‘You ever,’ he began, paused as if trying to find the proper wording, then went on, ‘read the horoscope?’

After a moment, Brunetti answered, ‘Not consciously.’ Seeing Vianello’s confusion, he continued, ‘That is, I don’t remember ever opening the newspaper to look for them. But I do glance at them if someone leaves the paper open to that page. But not actively.’ He waited for some sort of explanation; when none was given, he asked, ‘Why?’

Vianello shifted his weight in his chair, stood to smooth the wrinkles in his trousers, and sat down again. ‘It’s my aunt, my mother’s sister. The last one left. Anita.

‘She reads them every day. Doesn’t make any difference to her if what they predict happens or not, though they never say anything much, do they? “You are going to take a trip.” She goes to the Rialto Market the next day to buy vegetables: that’s a trip, isn’t it?’

Vianello had spoken of his aunt over the years: she was his late mother’s favourite sister and his favourite aunt, as well, probably because she was the most strong-willed person in the family. Married in the fifties to an apprentice electrician, she had seen her husband go off to Torino in search of work within weeks of marrying him. She waited almost two years to see him again. Zio Franco had had good luck in finding work, most of it with Fiat, where he had been able to study and become a master electrician.

Zia Anita moved to Torino to join him and spent six years with him there; after the birth of their first son, they had moved to Mestre, where he set up his own business. The family grew, the business grew: both prospered. Franco had retired only in his late seventies and, much to the surprise of his children, all of whom had grown up on
terraferma
, moved back to Venice. When asked why none of her children had wanted to move back to Venice with them, she had said, ‘They had gasoline in their veins, not salt water.’

Brunetti was content to sit and listen to whatever Vianello said about his aunt. The distraction would keep him from going to the window every few minutes to see if . . . If what? If it had started to snow?

‘And she’s started watching them on television,’ Vianello continued.

‘Horoscopes?’ Brunetti asked, puzzled. He watched television infrequently, usually forced to do so by someone else in the family, and so had no idea of what sort of thing was to be found here.

‘Yes. But mostly card readers and those people who say they can read your future and solve your problems.’

‘Card readers?’ he could only repeat. ‘On television?’

‘Yes. People call in and this person reads the cards for them and tells them what they should watch out for, or they promise to help them if they’re sick. Well, that’s what my cousins tell me.’

THE PRESIDENT 2 by Monroe, Mallory
Violations by Susan Wright
The Wolf's Mate Book 5: Bo & Reika by Butler, R.E.
The Other Life by Susanne Winnacker
A Taste of Trouble by Gordon, Gina
Skinwalker by Faith Hunter
Conquering Chaos by Catelynn Lowell, Tyler Baltierra
Jack in the Box by Shaw, Michael
Lovely Vicious by Wolf, Sara
Lost Paradise by Tara Fox Hall