Read Breaking All the Rules Online

Breaking All the Rules 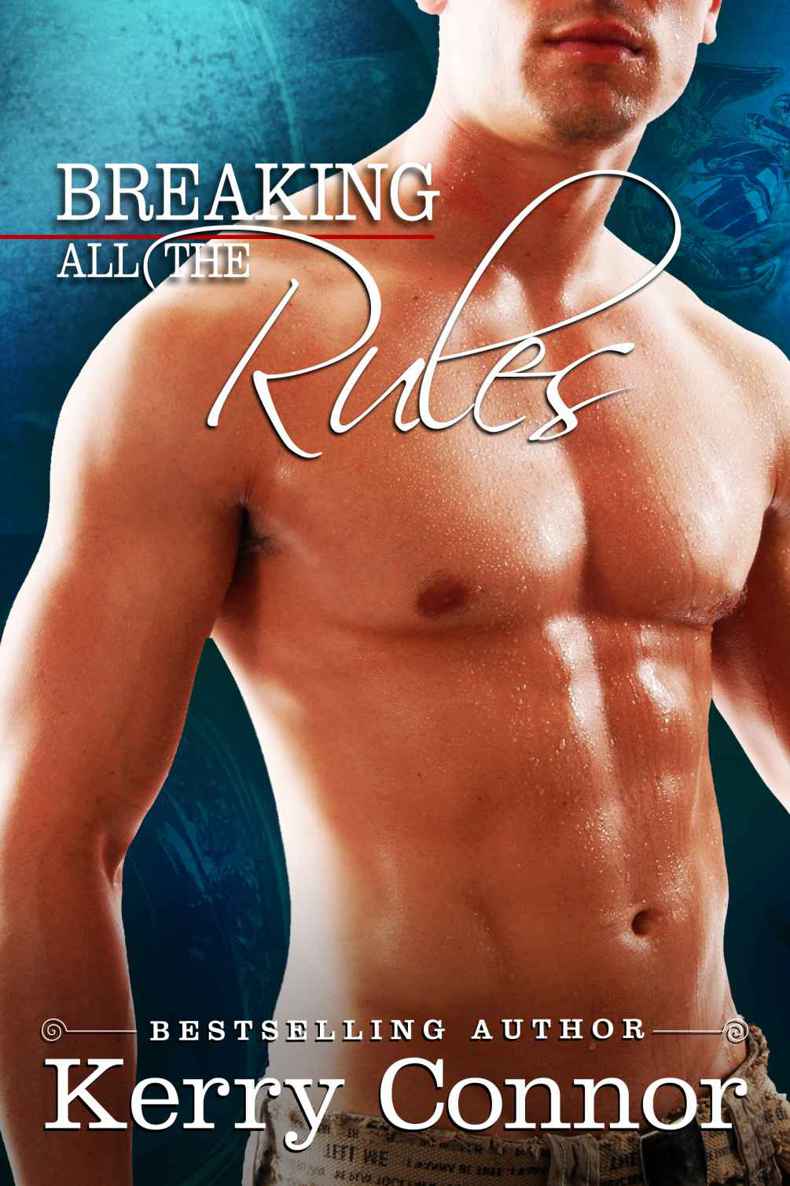 FROM NO STRINGS TO ALL
TIED UP IN KNOTS

It was a perfect arrangement. For three years Nina Warren
met up with U.S. Marine Bobby Dellucci for fantastic, no-strings-attached sex
whenever he was in the country. No drama. No expectations. Just fun. But when
Bobby returns from his most recent overseas deployment, he wants to change
their deal. He’d like to get to know her better and see if they can have
something more.

“Something more” is exactly what Nina doesn't want with him.
A military brat who grew up moving around the world, she isn’t interested in
dating anyone in the service. Fiercely independent, she knows what it’s like
for her life not to be her own, and she doesn’t want that anymore. She already
broke her rule getting involved with him at all. But Bobby isn’t one to give up
easily and he’s willing to fight for her—for them.

BREAKING ALL THE RULES

This ebook is licensed for your personal enjoyment only. This
ebook may not be re-sold or given away to other people. If you would like to
share this book with another person, please purchase an additional copy for
each recipient. If you’re reading this book and did not purchase it, or it was
not purchased for your use only, then please purchase your own copy. Thank you
for respecting the hard work of this author.

This book is a work of fiction. Names, characters, places and
incidents are either the product of the author's imagination or are used
fictitiously, and any resemblance to actual events, locales or persons, living
or dead, is entirely coincidental.

All rights reserved, including the right of reproduction in
whole or in part in any form.

For questions or comments regarding this ebook, please
contact the author at
kerrycon[email protected]
.

Amused, Nina
followed her friend’s gaze across the club to the man Ashley was gawking at.
Tall and slim with wavy blond hair, he was wearing a black T-shirt and obscenely
tight jeans. Not her type, but certainly not half bad to look at. “I doubt it.”

“Look at the
size of that bulge. It couldn’t more obvious.”

Nina gave the
bulge in question a passing glance. It was definitely impressive, straining
against his fly so massively it was a wonder the zipper didn’t burst.

She shrugged and
returned to her margarita. “I hate to break it to you, but he obviously stuffs.
That’s not real.”

“Please.” She
started to tick off the reasons on her fingers. “First of all, the size of that
thing is so exaggerated he looks like he was drawn by a dirty caricaturist.
There’s no way it’s real. Second, if it were real, he wouldn’t be wearing pants
that tight. He would be in physical pain and the jeans would be cutting off his
circulation so much he wouldn’t have that thing he’s so proud of for long. And
third, he wouldn’t even feel the need to wear those jeans if he was really
packing. Trust me, the men who have it show it in other ways. They’re
confident, cocky even, if you’ll pardon the pun. They know what they’ve got and
they don’t need to prove it to anyone. The strut is proof enough. It’s the guys
who don’t who feel like they have to bend over backwards proving they’ve got
what it takes.”

“And how do you
know all of that?”

Ashley’s face
drooped with disappointment. She gave the guy one last wistful look, then
reached for her drink. “Boy, you really know how to take the fun out of girls’
night.”

Ashley raised
her glass in a silent toast. “I stand corrected. At the moment, this has been
the most fun part of the evening. Of course, it would have been more fun if a
guy had bought it for me.”

Nina couldn’t
argue with her there. She sighed and took in the club with one sweeping glance.
The dance floor in the middle of the room was swamped with couples. The music
was fast, but most of the twosomes were moving slow, content to cling to one
another, hands exploring each others’ bodies, instead of actually dancing.
Along the sides of the room, everyone seemed pretty well paired up, either in
lone couples or twosomes within larger groups. There didn’t seem to be an
available man in sight. Even the stuffer was leering at a redhead in a
miniskirt so short Nina wasn’t sure why she’d bothered with it at all.

She felt a
twinge in her belly, the envy sharp and painful. She and Ashley had been so
busy the last few months she’d barely had time to think straight, let alone
date. They were going into business together, opening their own bake shop and
café, Sweet Sensations. It had been Nina’s dream since she’d been a little
girl, and now it was finally going to be a reality. Even the thought of it sent
a little thrill through her. The past several months had been spent finalizing
their business plan, finding a location, establishing relationships with
vendors, making a thousand little decisions and dealing with all the unexpected
issues that had popped up along the way.

Now everything
was set. They were opening in two days. This was a night for celebrating, a
chance to revel in their accomplishment before the truly hard work began. After
so many sleepless nights, she should have been exhausted. Instead, she merely
felt exhilarated, the adrenaline that had seen her through the last few days
still pumping through her veins.

With her dream
on the verge of coming true, she was ready to cut loose. This was the first
chance she’d had for a night out in months—and probably her last in a while—and
she’d wanted to make the most of it. It wasn’t until she got here and started
witnessing all the mating rituals being enacted around her that she realized
just how long it had been. Being around all these raging hormones wasn’t doing
much to calm her own.

A few years
back, she and Ashley might have taken to the dance floor themselves, not
worried about hooking up with guys, just wanting to have fun. But that wouldn’t
come close to satisfying the low ache she could feel throbbing through her.
“This isn’t exactly our best night, is it?”

Ashley gave her
head a rueful shake. “Why do you think I was staring at that guy? That’s about
as much action as I’m going to get tonight. I was trying to enjoy it before you
burst my bubble.”

“Sorry,” Nina
said. “I just didn’t want to get your hopes up about somebody like that.
Believe me, I’ve been there. You’re only setting yourself up for a bigger
disappointment that way.”

“I don’t know
why a guy would even bother to do that. He has to know it’s not something he
could lie about for long. As soon as the pants come off, it’s going to be
pretty obvious what he does or doesn’t have.”

Nina shrugged.
“Men are foolish creatures with fragile egos. Nobody ever said they make
sense.”

A loud, very
male snort of derision cut her off before she could continue. More curious than
annoyed, Nina turned to look behind her at the man who’d made the sound.

His closeness
immediately caught her off guard. He was sitting right behind her at a table
only a few feet away, close enough for her to feel his body heat. She was surprised
she hadn’t felt him before. Now that she’d noticed him, his nearness was
overwhelming. A rush of pure maleness filled her senses. He couldn’t have heard
their conversation better if he’d been seated at their table with them. The
smile curving his mouth left no doubt that he’d been listening.

She couldn’t
help noticing that it was a nice smile on a very nice face, all hard angles and
rugged planes. He was a big man, maybe in his mid to late twenties, with a
large frame and a muscular physique. The short sleeves of his button-down shirt
barely contained his biceps. Her fingers flexed of their own volition, and it
was all she could do not to reach out and feel the packed muscle in just one of
his arms. His dark hair was cut short, buzzed along the top and sides. He was
clearly military, not exactly a rare sight in San Diego. Judging from the
tattoo peeking out from his shirt sleeve, a Marine.

As she watched,
his smile deepened, giving her a glimpse of perfect white teeth. She had to
force herself not to return the gesture.

Instead, she
arched a brow and speared him with a glare. “Were you eavesdropping on a
private conversation?”

“Obviously,” he
said without remorse. “I figured it wasn’t too private if you decided to have
it in the middle of a bar with people sitting less than five feet away.”

The low sound of
his deep voice sent a rumble through her body straight to her belly. Awareness
sparked along her nerve endings. He was so unmistakably male her body couldn’t
help but respond. Her recent celibacy only intensified the reaction.

She did her best
to keep her response from showing on her face. “Do you often come to bars to
listen in on other people’s not-so-private conversations?”

“Not usually,
no, but your theories about men were so interesting I couldn’t help it.”

“I take it you
have something to contribute to the conversation?”

“Just that
women’s egos are more fragile than any man’s.”

Nina nearly
snorted. “And how to do you figure that?”

“The way I see
it, there are a lot more women walking around out there with padded bras than
men with padded jocks. If anyone’s more foolish thinking they’re going to get
away with tricking anyone, it’s women.”

“Women can get
away with it because most of the time they don’t have to deliver the goods,”
Nina retorted. “By the time a woman gets her bra off, most men are so dazzled
by the sight of bare breasts it doesn’t matter what size they are. Women, on
the other hand, are rarely struck dumb by a mere penis.”

“Then they
obviously haven’t been looking at the right ones.”

“And I suppose
you have one of those mind-blowing specimens?”

“That’s an awful
personal question coming from a woman who hasn’t even given me her name.”

She hesitated
only for a split second. “Nina.”

A laconic smile
spread across his face, and damned if she didn’t feel a surge of heat low in
her belly. Man, he had a great smile. “Bobby.”

She’d always
thought that Bobby was a name for ten-year-olds with skinned knees and backward
baseball caps, not a grown man like the impressive one seated next to her. But
somehow it suited him. As soon as he said it, she couldn’t imagine him being
called anything else.

“Would anyone
care to introduce me?”

Ashley’s voice
cut into Nina’s thoughts, reminding her of her friend’s presence for the first
time since she'd laid eyes on the man in front of her.

“I wouldn’t mind
an intro either,” another man said. Nina slid her gaze off of Bobby’s smile
long enough to register that he wasn’t alone at his table either. Another
military man sat on the other side, watching her with a supremely amused
expression of his own. She’d been so caught up in their conversation she hadn’t
even noticed him. Some part of her noted that he was good-looking, too, like a
blonder, fairer version of Bobby, but he couldn’t begin to compare to his
friend. Even as the thought crossed her mind, her eyes were already drifting
back to Bobby.