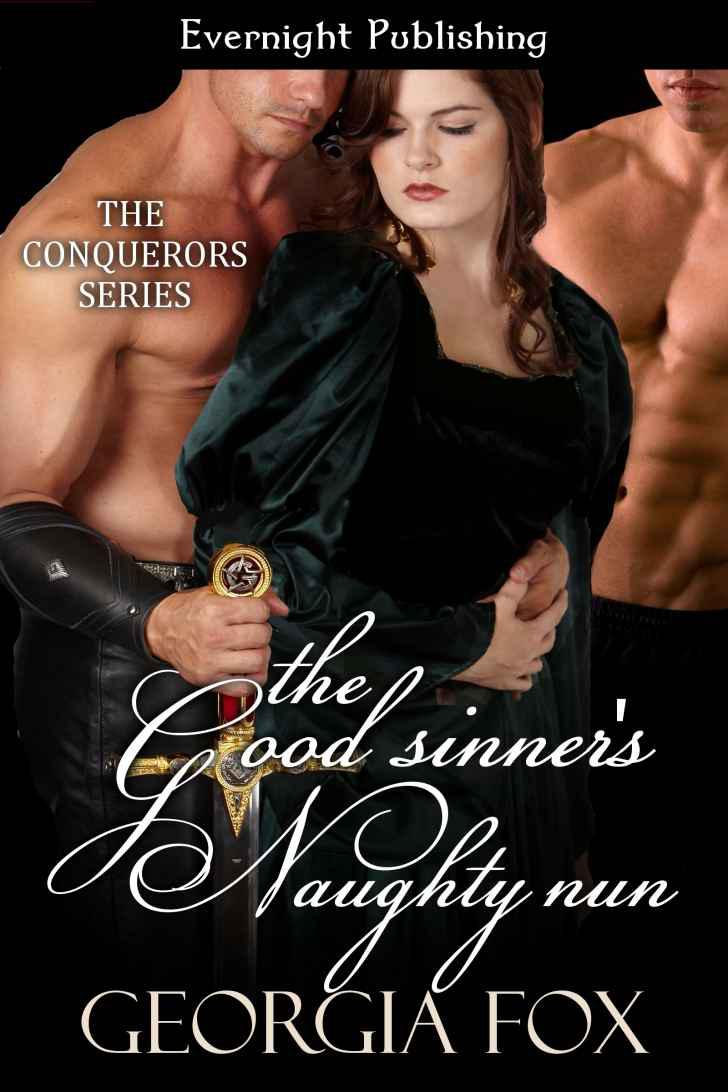 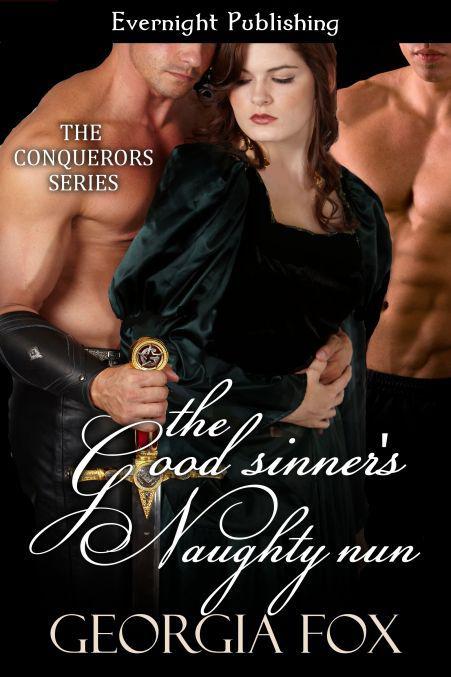 Thierry Bonnenfant hammered the last peg into the ground with a hefty swing. As he bent over, thin rain spat upon the back of his neck, but it was cooling rather than irritating and had been a steady presence for the past half an hour. He liked rain and had never cursed it, as some men might, on the verge of battle or a journey. For Thierry it was both a cleansing and a challenge to his spirit. If there were gods anywhere on earth, he thought, they were in rain. This was their way of touching the world of their creation, of feeding it and sometimes reminding man that he was not in charge.

But Thierry kept fanciful thoughts like these to himself. He wouldn't want his men to laugh at him, but they would if he showed he had any ideas in his head beyond battle, horses, and swiving.

A lot of folk, he mused, would be surprised to know Thierry Bonnenfant ever had a lyrical thought. Or a profound one.

He glanced up at the somber sky, squinting against the tickle of raindrops. The low clouds were clearing and sun struggled its way through, just in time to die away into the sea. Gulls floated above the camp, probably curious about these soldiers temporarily invading their hunting grounds.

"We won't bother you long," he muttered to the birds.

Tomorrow they rowed for Normandy. Tonight they would rest here at this camp, overlooking the sea, and prepare for the hard work ahead.

His tent secure now to his satisfaction, he finally turned to face the king's herald. This slender, nervous boy had hovered around his ear for the past ten minutes, apparently not knowing the danger of pestering a man with a large mallet in one hand.

"Got beetles in your breeches, or something you want to tell me, boy?"

"They wait outside the camp, my lord. They want to know where they are to stay until they board the boat in the morning."

"
They
?" Thierry swung his arm again and the mallet came to rest over one flexing shoulder. "I thought we were escorting a box of holy relics over to Normandy."

The herald squinted, shuffled his feet and finally gestured for Thierry to follow him. Words, it seemed, were not enough to explain the situation. With a sigh of annoyance at being dragged from other, more important tasks, he strode after the lanky boy.

A few of his men turned to look as he passed with the herald. They were all curious to see this casket of Saint Apollonia's remains over which such care was to be taken. Some soldiers left what they were doing to follow.

Rounding another tent, Thierry looked up and then stopped abruptly, rocking on the balls of his feet.

"They're here to guard the relics, my lord, until they arrive safely at Caen Abbey. King William thought it would do you good to have their company," the herald mumbled. "A change of pace for you, he called it, my lord."

There was a pause. The young herald stepped aside, head bowed, hands twitching at his sides.

Suddenly Thierry threw back his head and laughed. He laughed until he could barely stand straight. He laughed until all the rain was shaken out of his sun-gilded hair and all the men who'd gathered around began to laugh likewise, although most of them had no idea why. It lasted for a good thirty seconds and then his laughter snapped off, as unexpectedly as it began. His dark eyes hardened, he sucked in his cheeks and spat on the ground.

"Fuck," he swore benignly. "Just what I need. A boatload of virgins. The king enjoys a good jest today at my expense. Again."

As usual, he understated his predicament. For the tense cluster of women standing nearby, surrounding the casket of holy relics, were not merely virgins. They were nuns.

The nuns gathered closer, huddling around the casket, and eyed him dubiously across the small distance. They looked his way as if they felt the urge to cross themselves. On that August evening, in the ending mist of a summer rain shower, they gave off enough frigid air to bring an unwelcome memory of winter.

The flushed herald backed up another step, tripping over his own feet. Thierry supposed his reaction to the sight of nuns had been a strange and disrespectful one. Well, strange and disrespectful to anyone who didn't know Thierry Bonnenfant, his carefree attitude to life, his dark sense of humor, his disinterest in prayer, or his reputation for a ravenous sexual appetite.

"Chaste company to keep you on your toes and your mind on the job at hand for once, King William said," the young herald prattled onward.

Sighing gustily, hands on his hips, Thierry scanned the huddled bunch of women. "I can see we're in for a dry fortnight," he muttered. "Job in hand, eh? I'll have my cock in my hand more oft than not."

His men laughed loudly again and so did he, shaking his head. His critical appraisal took one last shot across the bundle of women in their dour grey, sack-like gowns. Despite the sunset now peering through the last, thin drops of rain and warming the skin on his back, he could have sworn the seed in his sac was frozen solid from the chill of their disdain. In the rear of the group one woman had her head bent, trying to hide her face. At first he thought she was sick or weeping, but when his gaze slid back for a second look, he realized she struggled to withhold a smile. What he could see of her downturned face was slight, but her quivering lips drew his attention, just before she raised a hand to cover them.

A nun with a sense of humor. Rare indeed.

He took a deep breath of damp air and tasted the salt of the sea on his tongue. Through a nearby line of trees, a softly churning stretch of water reached all the way to France. Tomorrow they would cross it. This journey would be the longest period of time he'd ever spent in the company of anything even remotely holy. He'd be lucky to come out of it alive, he thought wryly. So would they.

The arrival of the nuns, the casket, and the king's herald had briefly stopped all work on the camp, but now, after the initial curiosity, everyone hurried back to work. Refreshed by the rain shower, the soldiers pounded pegs into the dirt with renewed vigor and unfolded animal hides that would now dry in the sun. Fortunately it would stay light a while yet for the summer days were long.

"Where can they stay, my lord?" the herald urged again. If he suspected that Thierry had already put the women out of his mind, he was correct. Whores would have been another matter—something of greater interest and appeal. Whores were at least useful
and
entertaining. Nuns were neither. What good were nuns?

Thierry scratched his bare chest, squinting hard, wondering how best to handle these useless women and keep them out of the way. Finally he said, "They can have the tent over there." He pointed with the mallet. It was a tent set apart from the others, on the edge of the camp. Far enough away from his tent to keep them out of his hair.

"But there are eight women, my lord, and the tent is small. They won't be happy."

"
Happy
?" He almost exploded with another laugh, but held this one in check. "You can tell them from me, that this is a damned inconvenience for my men. Since we had no warning to expect other passengers, everything will have to be halved for the journey. Sacrifices will have to be made by all. They like sacrifice don't they? Nuns?" He sniffed, pleased with his own wit. "So I'd suggest you tell the old women to stay out of our way and be content with what they're given." Thierry spun around, leaving the young herald fumbling for a reply.

With his back to the new arrivals, he smiled broadly. The tent he'd so graciously given them was not only small, it was also the tent where they kept a few barrels, a noisy hog, a crate of hens, and two milking goats.

What better place to stow his fellow travelers and let them know how welcome they were? He looked up at the mellow colors that ran across the sky like spilled mead. The drizzling rain had stopped. It was going to be a lovely evening and hopefully a peaceful one. For him anyway.

"Someone must confront that villainous Bonnenfant."

Sister Marie was the acknowledged leader of the group, but when she made this announcement her stern face turned immediately to the newcomer among them, the young woman they barely knew. Sister Vivienne had joined them only days ago for this journey across the sea to Normandy. She'd made little attempt to fit in with their group, and she supposed that being seen as an outsider, they could throw her to the lion in his den more readily than they could abandon one of their own to the same fate.

Their situation was desperate. The mouthwatering odor of roasting meat—hunted, skinned and cooked by the soldiers—had floated in through the tent flap for at least an hour and yet no food was shared with them. They knew the men ate around the campfire. Raucous laughter could be heard frequently, although Sister Marie commanded them all to close their ears to the ribald jokes that preceded it. She was furious that they'd been "abused" in this manner, disrespectfully shuffled off into a tent with animals and left to starve. But she was not enraged enough to go herself and confront the man in charge.

"You, Sister Vivienne, will tell him we want food," Sister Marie commanded. "At once."

Just like that, Vivienne mused, swallowing a chuckle. Yes, she could imagine his response to her demand. From what she'd briefly seen of Thierry Bonnenfant he was not impressed with his last-minute charges. He would also, very probably, not care at all if they starved.

Highland Master by Amanda Scott
Justin and the Best Biscuits in the World by Mildred Pitts Walter
Mi último suspiro by Luis Buñuel
Spellscribed: Ascension by Cruz, Kristopher
Death of a Kitchen Diva (Hayley Powell Food and Cocktail Mysteries) by Hollis, Lee
Come To Me by Thompson, LaVerne
Long Lies the Shadow by Gerda Pearce
Death on the Pont Noir by Adrian Magson
The Big Killing by Robert Wilson
Petrella at 'Q' by Michael Gilbert