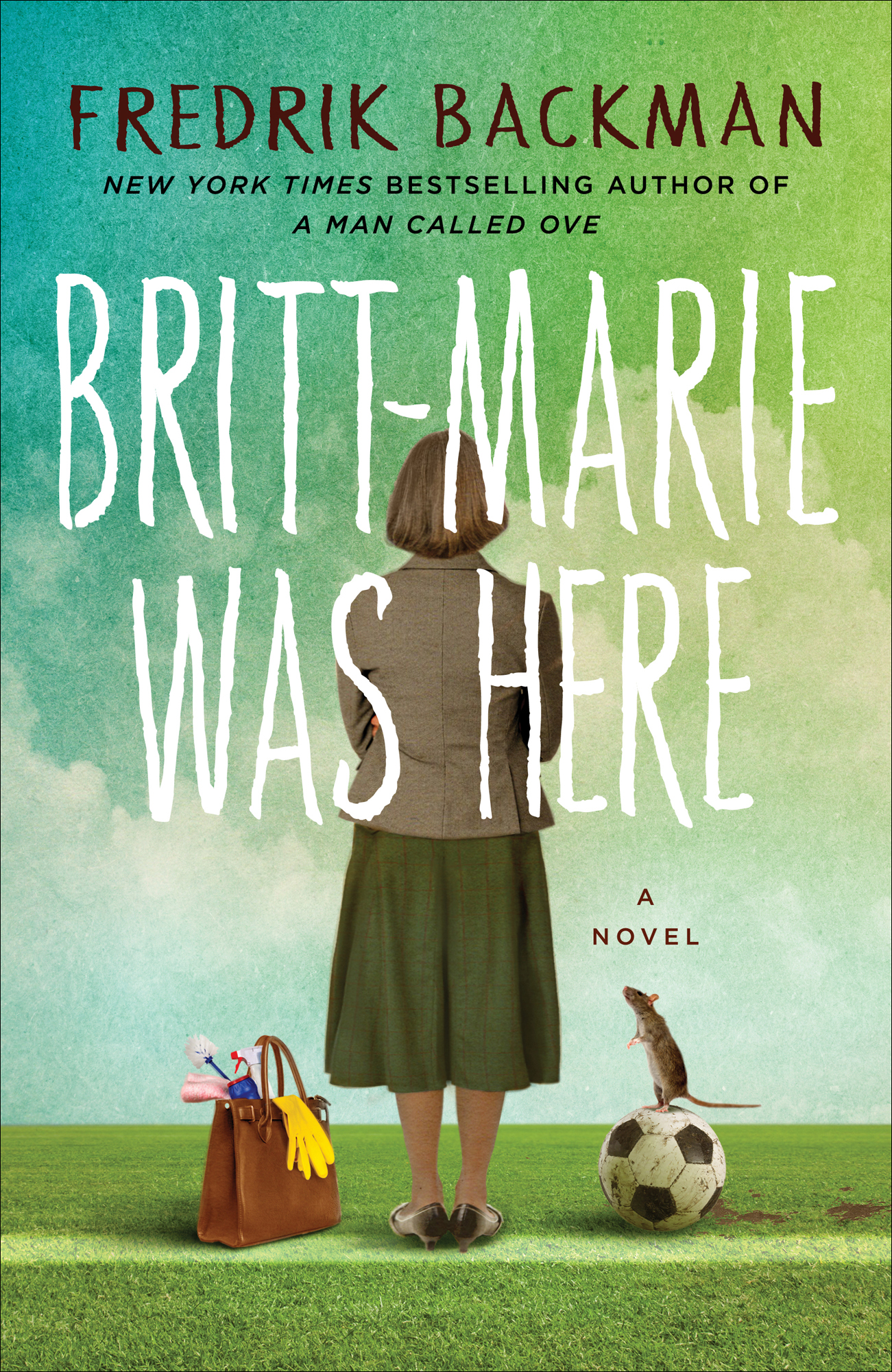 Thank you for downloading this Atria Books eBook.

To my mother, who always made sure there was food in my stomach and books on my shelf.

Borg is an imaginary place, and any apparent resemblance to real places is coincidental.

Britt-Marie is certainly not the kind of person who judges other people. Far from it.

But surely no civilized person would even think of arranging a cutlery drawer in a different way from how cutlery drawers are supposed to be arranged?

We’re not animals, are we?

It’s a Monday in January. She’s sitting at a desk in the unemployment office. Admittedly there’s no cutlery in sight, but it’s on her mind because it sums up everything that’s gone wrong recently. Cutlery should be arranged as it always has been, because life should go on unchanged. Normal life is presentable. In normal life you clean up the kitchen and keep your balcony tidy and take care of your children. It’s hard work—harder than one might think. In normal life you certainly don’t find yourself sitting in the unemployment office.

The girl who works here has staggeringly short hair, Britt-Marie thinks, like a man’s. Not that there’s anything wrong with that, of course—it’s modern, no doubt. The girl points at a piece of paper and smiles, evidently in a hurry.

Britt-Marie has to be registered. As if she were a criminal. As if she has come to steal a job rather than find one.

“Milk and sugar?” the girl asks, pouring some coffee into a plastic mug.

Britt-Marie doesn’t judge anyone. Far from it. But who would behave like that? A plastic mug! Are we at war? She’d like to say just that to the girl, but because Kent is always urging Britt-Marie to “be more socially aware” she just smiles as diplomatically as she can and waits to be offered a coaster.

The girl offers her two tiny disposable cartons of the sort of milk that doesn’t have to be kept in the fridge. Then she holds out a plastic mug with plastic teaspoons protruding from it. Britt-Marie could not have looked more startled if she’d been offered roadkill.

She shakes her head and brushes her hand over the table as if it was covered in invisible crumbs. There are papers everywhere, in any old order. The girl clearly doesn’t have time to tidy them up, Britt-Marie realizes—she’s probably far too busy with her career.

“Okay,” says the girl pleasantly, turning back to the form, “just write your address here.”

Britt-Marie fixes her gaze on her lap. She misses being at home with her cutlery drawer. She misses Kent, because Kent is the one who fills in all the forms.

When the girl looks like she’s about to open her mouth again, Britt-Marie interrupts her.

“You forgot to give me a coaster,” says Britt-Marie, smiling,
with all the social awareness she can muster. “I don’t want to make marks on your table. Could I trouble you to give me something to put my . . . coffee cup on?”

She uses that distinctive tone, which Britt-Marie relies on whenever she has to summon all her inner goodness, to refer to it as a “cup” even though it is a plastic mug.

As if life was as simple as that. As if using a coaster or organizing the cutlery drawer in the right order didn’t matter. The girl—who clearly doesn’t appreciate the value of coasters, or proper cups, or even mirrors, judging by her hairstyle—taps her pen against the paper, by the “address” box.

“But surely we can’t just put our cups on the table? That leaves marks on a table, surely you see that.”

The girl glances at the surface of the desk, which looks as if toddlers have been trying to eat potatoes off it. With pitchforks. In the dark.

“It really doesn’t matter; it’s so old and scratched up already!” she says with a smile.

Britt-Marie is screaming inside.

The unemployment office girl looks a little strained. “Okay . . . what did you say your name was? Britt, right?”

“Britt-Marie. Only my sister calls me Britt.”

“Okay, Britt-Marie, if you could just fill in the form. Please.”

Britt-Marie peers at the paper, which requires her to give assurances
about where she lives and who she is. An unreasonable amount of paperwork is required these days just to be a human being. A preposterous amount of administration for society to let one take part. In the end she reluctantly fills in her name, social security number, and her cell phone number. The address box is left empty.

“I’ll have you know that my education is excellent.”

“But no formal education?”

“For your information, I solve an enormous number of crosswords. Which is not the sort of thing one can do without an education.”

“My latest employment was as a waitress. I had outstanding references.”

The girl looks hopeful. “And when was that?”

“I have worked
every day
since then. I’ve helped my husband with his company.”

Again the girl looks hopeful. “And what sorts of tasks did you perform in the company?”

“I took care of the children and saw to it that our home was presentable.”

The girl smiles to hide her disappointment, as people do when they don’t have the ability to distinguish between “a place to live” and “a home.” It’s actually thoughtfulness that makes the difference.
Because of thoughtfulness there are coasters and proper coffee cups and beds that are made so tightly in the mornings that Kent jokes with his acquaintances about how, if you stumble on the threshold on your way into the bedroom, there’s “a smaller risk of breaking your leg if you land on the floor than the bedspread.” Britt-Marie loathes it when he talks that way. Surely civilized people lift their feet when they walk across bedroom thresholds?

Whenever Britt-Marie and Kent go away, Britt-Marie sprinkles the mattress with baking soda for twenty minutes before she makes the bed. The baking soda absorbs dirt and humidity, leaving the mattress much fresher. Baking soda helps almost everything, in Britt-Marie’s experience. Kent usually complains about being late; Britt-Marie clasps her hands together over her stomach and says: “I absolutely must be allowed to make the bed before we leave, Kent. Just imagine if we die!”

This is the actual reason why Britt-Marie hates traveling. Death. Not even baking soda has any effect on death. Kent says she exaggerates, but people do actually drop dead all the time when they’re away, and what would the landlord think if they had to break down the door only to find an unclean mattress? Surely they’d conclude that Kent and Britt-Marie lived in their own dirt?

The girl checks her watch.

Britt-Marie feels her tone has a note of criticism in it.

“The children are twins and we have a balcony. It’s more work than you think, having a balcony.”

“How old are your children?”

“Yes,” says Britt-Marie dismissively, as if this was highly irrelevant.

The girl clears her throat as if, actually, it’s very relevant indeed.

“Well, Britt-Marie, quite honestly, because of the financial crisis and all that, I mean, there’s a scarcity of jobs for people in your . . . situation.”

The girl sounds a bit as if “situation” was not her first choice as a way of concluding the sentence. Britt-Marie smiles patiently.

“Kent says that the financial crisis is over. He’s an entrepreneur, you must understand. So he understands these kind of things, which are possibly a little outside your field of competence.”

The girl blinks for an unnecessary amount of time. Checks her watch. She seems uncomfortable, which vexes Britt-Marie. She quickly decides to give the girl a compliment, just to show her goodwill. She looks around the room for something to compliment her about, and finally manages to say, with as generous a smile as she can muster:

“You have a very modern hairstyle.”

“What? Oh. Thanks,” she replies, her fingertips moving self-consciously towards her scalp.

“It’s very courageous of you to wear your hair so short when you have such a large forehead.”

Why does the girl look offended? Britt-Marie wonders. Clearly that’s what happens when you try to be sociable towards young people these days. The girl rises from her chair.

“Thanks for coming, Britt-Marie. You are registered in our database. We’ll be in touch!”

She holds out her hand to say good-bye. Britt-Marie stands up and places the plastic mug of coffee in her hand.

“I suppose I’m supposed to just sit and wait,” counters Britt-Marie with a diplomatic smile, “as if I didn’t have anything better to do?”

“Well, my colleague will be in touch with you about a jobseekers’ training course, an—”

“Absolutely, but it’s difficult to say when something will turn up. . . .”

Britt-Marie takes a notebook from her pocket.

“Shall we say tomorrow, then?”

“Could something turn up tomorrow?”

The girl clears her throat.

Britt-Marie gets a pencil from her bag, eyes the pencil with some disapproval, and then looks at the girl.

“Might I trouble you for a pencil sharpener?” she asks.

“A pencil sharpener?” asks the girl, as if she had been asked for a thousand-year-old magical artifact.

“I need to put our meeting on the list.”

Some people don’t understand the value of lists, but Britt-Marie is not one of those people. She has so many lists that she has to keep a separate list to list all the lists. Otherwise anything could happen. She could die. Or forget to buy baking soda.