Thank you for downloading this eBook. This book
remains the copyrighted property of the author, and may not be
redistributed to others for commercial or non-commercial purposes.
If you enjoyed this book, please encourage your friends to download
their own copy from their favorite authorized retailer. Thank you
for your support.

This book is purely a work of fiction. Any
names, characters, and places are products of the author's
imagination and are used in a fictitious manner. Any resemblance to
actual events, settings, or people is coincidental.

I would like to thank all of those who have
inspired and supported me to pursue this dream. To my parents, who
without them I would never be here and who are always behind me no
matter what. To Catherine White, who is my shining beacon of hope
that will always catch me when I fall. To Raouf Sattaur and Henry
Chang, who read my initial drafts and helped me to make this novel
what it is today.

To Alessandro "Ganassa" Mazzetti, for his
wonderful work on the cover, and to Khiry Wilson, for his
exceptional touch on the title. Lastly, to James Hunter-Shortland
for his breathtaking maps. 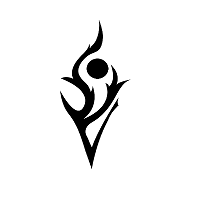 It seemed as though the blizzard outside would
never end.

Serraemas huddled around the fireplace, wrapped
in a bundle of cloth that he thought would protect him. To his
dismay neither the fire nor the wool blanket offered much reprieve,
and he was subjected to the curse of shivers.

In an effort to take his mind off of the
ailment, he peered into the depths of the crackling flames under
the stone pot of boiling stew. He watched intently as the wooden
timber smoldered under the heat and fueled the fire, but at the
cost of its own essence.

“Serraemas?” cooed a soft voice gently, and he
felt just-as-gentle hands caressing his back. So entranced was he
that he hadn’t even sensed his mother approaching from behind.

He looked up to meet her warm eyes and smile,
and he made his best attempt to smile back, though he knew his
chattering teeth didn’t quite conform to his wish.

“Didn’t I tell you not to stay out there too
long?” she said worriedly. “Eight-year-old boys shouldn’t be
playing during the storm. The snow will stay for a while after the
blizzard, you know? Something worse than a cold could have
happened…”

“I’m s-sorry, m-mother”, mumbled Serraemas as he
looked down at nothing in particular. “I p-promise I won’t d-do it
again.”

She sighed. “It’s all right, Serraemas.”

Once again he felt the same, soft hands
caressing his back. Even though the gesture wouldn’t make the
sickness go away, at the very least it brought him some comfort and
held the shivering at bay, even for a little while. His stuffy nose
barely caught the aroma of a hearty stew. “Is s-supper ready
soon?”

“Almost”, returned his mother. “We just need to
wait for your father. He’s running a little la—“

Serraemas heard the sound of the front door
open, the roughly wood creaking open on battered hinges. Soon after
followed heavy footfalls as someone entered. The howling winds of
the blizzard managed to sneak in through the open door until it was
once again interrupted as the door returned to its previous
position.

“We were just wondering where you were, dear”,
said his mother, undoubtedly directing the words at the figure that
entered their small home.

Serraemas turned to meet his father’s gaze, who
shook his head and laughed to himself. “I see someone had a little
too much fun.”

His father wore a thick coat, along with gloves,
boots, and a hat that not only covered his head but also his ears.
White snow was collected on the garment, particularly on top of the
hat, on the shoulders, and under the boots. Serraemas noticed that
his father was carrying a decently-sized brown pouch, though he
could not ascertain its contents.

“Well, can you really blame him?” asked his
mother.

Serraemas’s father shrugged as he removed
articles of clothing one-by-one and placed them atop the coat rack
near the door. “I suppose not. Kids will be kids. Is supper ready?
I’ll bet even the wolves heard my rumbling stomach.”

Serraemas obliged, rising up from where he sat
eagerly. Perhaps a bit too eagerly, for he stumbled and nearly
tripped on the edge of the blanket that had gotten caught at the
bottom of his foot. After he regained his composure, he hurried
over to the table and took his place next to his father, patiently
awaiting his meal.

One-by-one, his mother served the hot stew with
stone bowls. “There you go. Now eat, sweetie. The hot stew will be
good for the cold.”

Serraemas peered down into the hot liquid,
noting an assortment of vegetables, but unable to identify any sort
of meat. Grabbing the spoon, he swished the contents of the stew.
Still nothing. He looked up at his parents. “No meat tonight?”

He felt a soft pat on his head.

“Not tonight, my son”, answered his father
somberly. “But someday, you will have all the meat you will ever
want.”

His father didn’t answer immediately. Instead,
he gulped down a large spoonful of the stew. “They’re not lies,
dear. Our luck might have finally changed. I can finally tell that
bastard Ogill to shove it up his ass.”

Serraemas’s mother returned a stern expression.
“Not in front of Serraemas. We talked about it. And what would
happen if Sir Ogill found out how you refer to him?”

His father waved a hand, dismissing her
comments. “What’s he going to do? Pay me less for all the work I do
tending to his fields? I ought to go all the way to Lorine and tell
them what kind of madman he is.”

“Someone’s feeling brave”, whispered his mother
as she leaned closer. “What’s gotten into you?”

“It’s not what’s gotten into me”, replied his
father. “It’s what I’ve gotten!”

Seemingly out of nowhere, Serraemas saw his
father retrieve the same pouch, holding it up into the air and
jangling it. The sound of several pieces of metal clanged
softly.

“What’s that?” asked his mother with a mixture
of curiosity and concern.

“Our change of luck”, answered the man proudly.
“I got it from Jassen. He says I need to hold on to it for a bit,
but we’re going to split it soon.” He then smiled at Serraemas.
“I’ll get you whatever you want for the Winter’s Frost festivities
this year. Maybe one of Labrys’s toys?”

Serraemas’s mother also smiled at him, though
hers was a nervous one, as if something was amiss and she was
trying to hide that fact. She then turned to his father and
furrowed her brows. “Then how did
he
get it?”

“Who knows”, said his father with a shrug.
“Nobody knows I have it so it’s safe. All we need to do is make
sure it stays that w—“

A swift knock came out the door.

The two adults looked at each other in
puzzlement.

“Who the hell could that be?” asked his father
to no one in particular.

“Who is it?” shouted the older man.

With a shrug, Serraemas’s father stood up from
his seat and walked over to the door. He reached for the knob and
pulled slowly—

The door swung open violently, crashing onto his
father and knocking the man down. Without pause a slew of
hardy-looking men rushed in, some swarming over his father and
others approaching both Serraemas and his mother. Shouts and cries
rang throughout the small cottage as blunt weapons were raised and
subsequently swung.

“Serraemas, run!” shouted his mother hoarsely
before being overtaken by the host of intruders.

Panic set in, and Serraemas froze. He watched in
horror as both his parents were attacked mercilessly. He looked in
the direction of the door, noticing that a few of the men stayed
back and blocked the only entrance to the home—and the only way
out. Without anywhere to go, Serraemas turned around and nearly
jumped into the closet, fumbling with the door as he tried to close
it as if it would somehow cause the nightmare to cease.

In between the slight crack, Serraemas saw his
parents—bodies wracked with cuts, bruises, and brutal injuries—as
they were dragged out violently into the raging blizzard. What
seared his mind the most, however, was their terrified faces as
they shouted in pain.

The rest of the men marched out the door save
for one that approached the very closet that Serraemas had shut
himself in. He was able to get a closer look at the assailant,
noticing the man had a scarred and rough face, and to use the term
ugly would have been a complement.

“Come ‘ere ya little shit”, beckoned the man
menacingly as he reached out, intending to pry open the closet
door—

“Leave the runt alone”, said another voice
behind the ugly man. “He’s just a bastard now. He’s no use to
us.”

The first man snarled at Serraemas, but turned
around and stomped out the door, leaving the boy to be alone.

Serraemas broke down in tears, and couldn’t
prevent himself from sobbing uncontrollably.

Slowly, Serraemas opened the closet door, and
the creaking wood echoed throughout the small house. He surveyed
the room, noticing the entire cottage was trashed. Chairs were
broken. Pots littered the floor.

The only sound came from the furious blizzard
invited by the open door.

Serraemas rushed out of his home and into the
storm. Immediately he was pelted by hail and snow alike. He
struggled to cover his face, looking around for any sign of his
parents, but the blizzard made it difficult to see even past a few
feet. By now, the snow had piled up heavily, and Serraemas left
snowy footprints behind him that were quickly erased.

Coughing and teary eyed, he made his way to a
neighboring home and knocked. “Somebody help!”

“Go away”, he heard from the other side of the
door.

Looking around, Serraemas continued on to
another hovel. Once again he knocked, but was turned down just the
same. The pattern repeated for several houses, and at this point he
didn’t even know how far away from his home he had gotten.

Cold, defeated, and afraid, Serraemas slouched,
then fell down into the thick snow. With his face half buried in
the snow, tears continued to make their way down his face as the
biting frost wracked his body. He laid there for a few
moments—alone and hopeless—until soft footfalls stopped just near
his head. Struggling, Serraemas lifted his head to meet the gaze of
a young girl near the same age as him and bundled in a similar
wrapping.