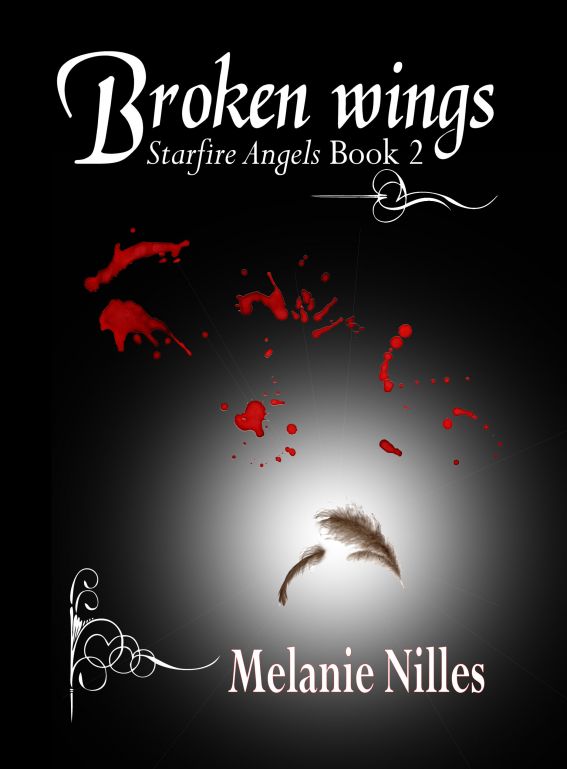 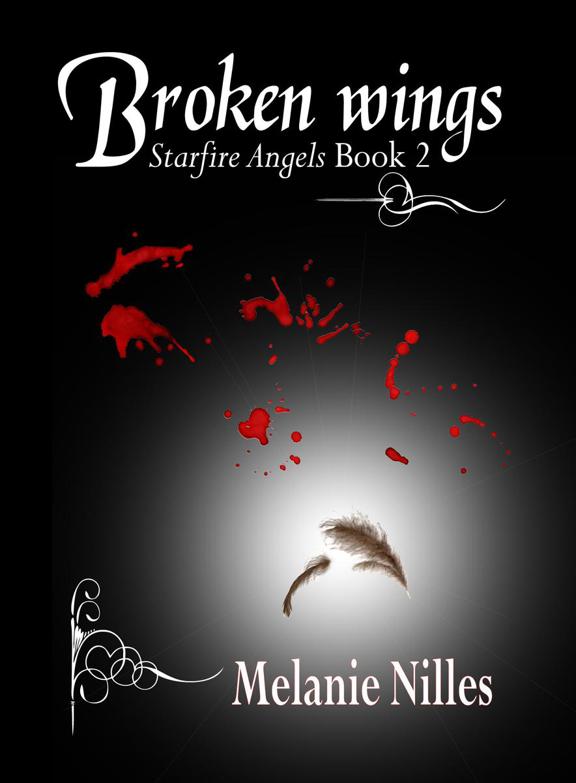 One Shirukan, an elite soldier of the
Shirat Empire, came to Earth for Raea's Starfire shard and
failed.

Aware of the possibility of another
attack, Raea trains to use the shard's power to protect it while
preparing to graduate from high school. But she discovers that the
Keeper training her has betrayed her trust and now she must decide
where her heart belongs. She never imagined that distance from him
would mean a universe apart.

After the Shirukan attack, she wakes up
to find herself on the Inari homeworld. With the help of allies,
she hopes to reach the Crystal Keeper known as Saffir to return
home. First, she must elude the thousands of Shirukan between her
and freedom.

Broken Wings
is a work of fiction. Any resemblance of
characters, names, places, or incidents to reality is pure
coincidence.

For information, contact
Melanie Nilles at
mailto:[email protected]
or online at
www.melanienilles.com
.

What Are Friends For?

The Truth About
Angels

Through the connection with the
entities of the Starfire, Raea experienced glimpses of other
worlds, other beings. A pink triple moonset. A spiraling cloud of
dust radiant with colors. Alien beings of a variety of shapes. The
births of planets and stars.

Earth of the past.

And her mother, the last Crystal
Keeper who died to protect the shard Raea now bore.

She was Inari, one of the winged
inhabitants of a world in another galaxy, and she had a lot of
catching up to do in her training if she hoped to prevent the
Shirukan from taking the Starfire. She'd almost failed
once.

The glow of the Starburst marks on the
palms and backs of her hands and the glow of her shard waned with
her distraction from the resonance.

"You almost had it that time." The
gentle berating drew her to the biggest distraction.

In the faint glow from her hands, Elis
frowned. Wild black hair hid the deep purple of his eyes that she
had grown to love and the only obvious clue that he wasn't human,
since he hid his hands in fingerless gloves to avoid questions
about the Starburst marks he also bore.

The disappointment on his face
bothered her.

"Easy for you to say." He'd had his
training on the homeworld, and without an actual shard to generate
the portal and screw up their universe. One wrong calculation on
her part and—whoops!—bye, bye Earth. Although it would give new
meaning to ending world hunger and war.

Black wings shifted on his back,
tightening in a sign of the agitation he didn't show on his face.
"If they come back—"

"I know. I
know
!" He didn't have to
remind her that she'd almost been taken four weeks ago by an agent
from the homeworld. The Shirat Empire had two of the four shards
already, enough to power Heffin's Gate, the original machine
created six thousand years ago. It used the Starfire's power to
open portals anywhere in the universe by jumping through the
Starfire's original dimension, where the entities existed as pure
energy, and it could be used as a weapon.

She wasn't about to give up her shard
without a fight.

Elis could be such a nag about these
things.

"It's hard. Maybe I'm just afraid. You
know?" Raea looked up as the light from the crystal and her
Starburst marks faded to the normal aquamarine color, mere shadows
under the wan light of the moon over the prairie.

His hands rubbed her shoulders. "I was
sent to protect you but wasted two years because your mother made
Debbie promise to let you grow up human. After last month…They
could be back any day."

Raea shuddered and pressed close to
the security of his embrace, her brown wings tight to her back. The
late April night on the open fields of North Dakota brought a new
chill with the reminder of the danger lingering only a portal
away.

"If they come back…" His warm breath
blew across her hair, but the sound of his swallow was far from
reassuring.

"Or maybe they're being more careful
for their next attempt to take you." His arms tightened around
her.

For two years, Elis Jasheir, the quiet
foreign student, creeped her out, until she'd had to talk to him.
Now, she couldn't imagine a day without him.

He had good reason to be
overprotective. If the Shirukan, the elite soldiers of the Shirat
Empire, obtained all the shards, they would have full control of
Heffin's Gate, and that portal generator could be turned into a
weapon capable of destroying whole worlds. He didn't have to remind
her of the danger.

"Can we go home?" Raea whispered.
"We've been out here—" She pulled her cell phone from her jacket
pocket and checked the time—9:50 pm. "—over an hour. It's late and
we haven't had much flying. I'll try harder tomorrow. I
promise."

Elis let out a deep breath and in the
faint moonlight, leaned down. The quick kiss sent a different kind
of shiver through her, one she welcomed.

A second later, he stepped back,
giving her room to spread her wings and flap into the air. He
followed close behind and caught up to her when she leveled off at
a warm layer of air.

In the distance, a light-speckled area
shone from the prairie; McClarron, home to only four thousand, her
home for the last thirteen years since her mother and stepfather,
Padina and Scott Dahlrich, had died in a storm. Scott's sister,
Debbie, had been like a second mother since then.

Up and down movement, almost glowing
between the moonlight and the town lights, caught her
eyes.

Fear gripped her heart and steadied
her wings to gliding. Shirukan! How?

No, it couldn't be. She'd felt nothing
from the Starfire, and it would have reacted to a portal opening,
unless it had happened while the resonance warmed through her in
her practice.

But wouldn't they leave a portal open
to take her back to Inar'Ahben? It didn't make sense that one would
be out alone if they really wanted to capture her.

Everything inside her said this was
wrong.

Elis flew close beside her, his wing
tip feathers brushing hers momentarily.

Land? Did he mean the land below? Was
there something he spotted?

"Head to the field to
land!"

Oh,
that
land. Good idea—their field where
they took off and landed over the hill from the edge of town.
Fighting in the air was tricky and would attract unwanted
attention, and this way, they would be close to help.

On the clear side of the trees of the
shelterbelt around an old farmstead, Raea flapped to slow her
descent and touched down lightly.

Elis landed with her and stood close,
his hand finding hers. His eyes fixed on the winged shape
approaching. He didn't look worried; in fact, he stood with his
usual calm, his hand relaxed around hers, not the tension of
someone expecting trouble.

Blue-white wings extended upwards,
lowering a woman to the ground with short blue-white hair and
earrings encrusting the edges of both ears.

In the light from the moon, a smirk
lit up the woman's face as she unbuckled a backpack worn on her
chest. "Hey, cuz! Long time no see."

Cousin? Then this was—

"Nare." Irritation ground in his
voice.

"Ah, come on now. Is that any way to
greet family after all these years?" The backpack thumped to the
ground as if heavy. Icy blue eyes that seemed to glow in the
moonlight fixed on Raea. "And you must be Raea. It's an honor to
meet you, Crystal Keeper." Nare spoke with a reverence that
surprised Raea after her flippant greeting to Elis, and she tipped
her head, her wings open slightly.

A few seconds later, she straightened,
a smile beaming from her face and her hands on her slender hips. "I
trust my cousin's treating you well?"

Raea caught Elis's eyes in the light
of the moon. The wild black hair hid much of the expression of
those eyes, but she recognized that dark mood. "Very well." He'd
been a gentleman teacher, protector, and boyfriend from the
beginning. In fact, he'd offered his support in the difficulties
they'd endured without a word about any inconvenience to him, even
when she knew he wasn't comfortable.

"That's good. I was afraid I might
have to shake him up a bit." She grinned at Elis and winked. "For
old times' sake."

"Old times?" Raea looked from one to
the other.

"Aren't you the modest one now." After
a few seconds of awkward silence, Nare picked up her backpack. "Any
ideas where I can stay?"