Bryant & May - The Burning Man 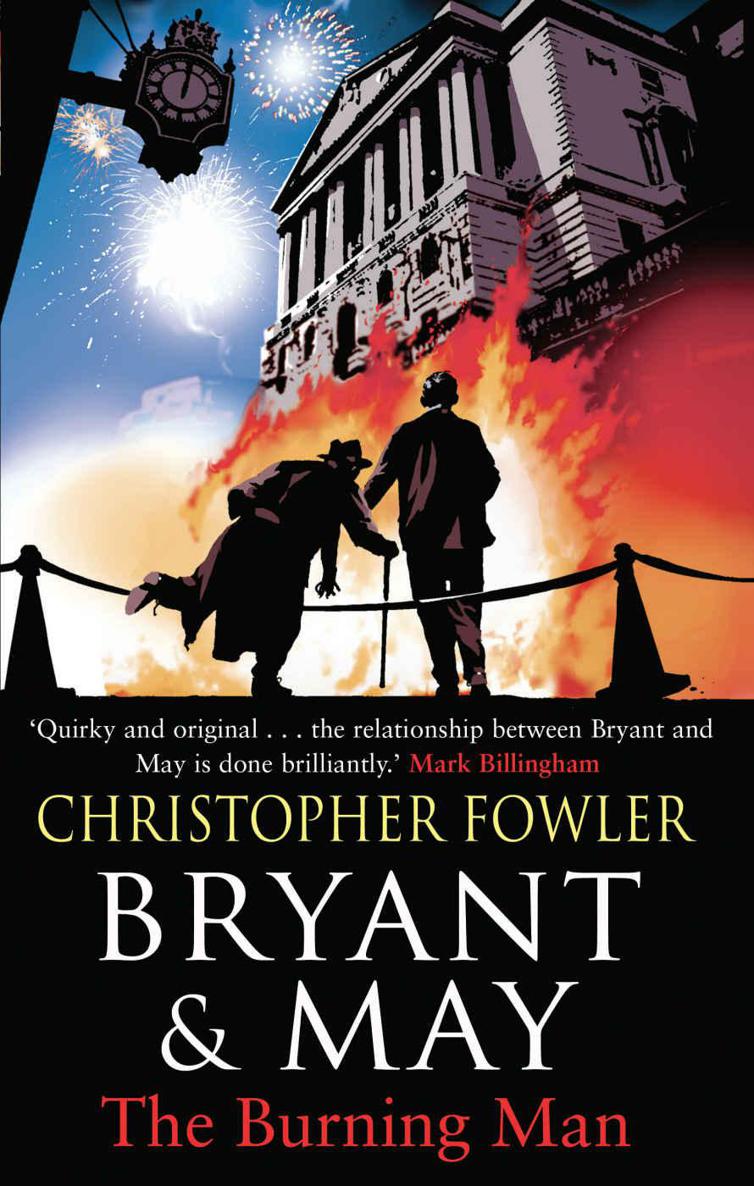 London is under siege. A financial scandal has prompted violent protests. As the anger in the streets detonates, a young homeless man burns to death after being caught in the crossfire between rioters and the police.

But things are not quite as they seem. An opportunistic killer appears to be using the chaos to exact revenge, and yet the intended victims seem to be selected in such a mysterious manner that the Peculiar Crimes Unit is called in to find a way of stopping him.

Using their network of eccentric contacts, detectives Arthur Bryant and John May must hunt down a murderer who is adopting some decidedly incendiary methods of execution. And the investigation takes an apocalyptic turn when it becomes embroiled in the history of mob rule, corruption, rebellion, punishment . . . and the legend of Guy Fawkes.

As the race to catch a cunning killer reaches its climax, the most personal tragedy is yet to come with a devastating day of reckoning. As Arthur Bryant observes: ‘I always said we’d go out with a hell of a bang . . .’

38 Ophelia on the Shore

40 Sparrow with a Broken Wing 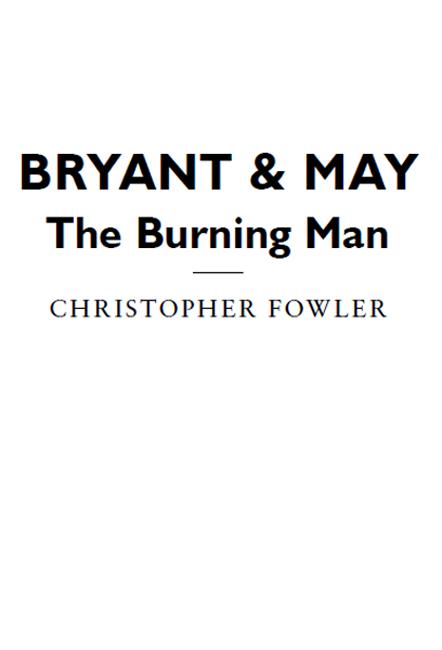 For my mother, Kath

I’ve always felt that the Bryant & May series was about outsiders who, in their own way, are actually at the freethinking heart of London. We live in a complex city often described as a collection of unique villages, which is probably why so many of its residents behave with the quiddity of innocents seeing off predators.

Among those inside-outsiders are the people who help and inspire me to keep delving further, from Simon Taylor and Kate Miciak, my brilliant editors, to Mandy Little, James Wills, Howard Morhaim and Meg Davis, my perspicacious agents, Kate Samano and Richenda Todd on copy, and PRs Lynsey Dalladay and Sally Wray.

Thanks also to Mike and Lou, who every year head to Lewes for a night of devilry, and helped to provide the idea for this book. The character of Joanna Papis is real – beware of befriending an author!

Thanks go out also to the book clubs, booksellers and readers who have kept this series going from strength to strength; I simply could not do it without you.

For more on the Bryant & May novels, visit
www.christopherfowler.co.uk

‘If you do not want to dwell with evil-livers, do not live in London’

‘I see no reason why gunpowder treason should ever be forgot’

‘Before I start, can I ask you to look around you at this beautiful building? After eight hundred years it’s still the home of the City of London Corporation, the powerhouse at the heart of the world’s leading financial centre.

‘I search the room and see a great many youthful faces. At my age, everyone is youthful. Some of you look positively prepubescent. So, as the most senior detective at London’s Peculiar Crimes Unit, may I be indulged for a moment, and give you a brief history lesson about the city you’ve been entrusted to look after?

‘In Tudor times London was still a box. It was tightly contained by walls on three sides, the fourth being the River Thames. This walled city was stitched into the pattern of its ancient Roman boundaries, and could be entered by only seven gates. London’s main road was Cheapside, which ran out to the Shambles in the west and Cornhill in the east.

‘It was a city bristling with church spires, the greatest of which was St Paul’s, which collapsed after being struck by lightning in 1561. It had two royal palaces, Baynard and Bridewell, built for Henry the Eighth. It had colleges and law courts, bowling alleys and tennis courts, cockpits and theatres. And this is how it would have stayed without the conflagration that transformed it, the Great Fire of 1666.

‘The city recovered with incredible speed. Just five years later, over nine thousand new houses and public buildings had been completed. The new middle-class residents wanted a separate residential district and moved west, and so London rolled like treacle across the land, leaving the financiers stuck in the old squared-off section, which became known as the Square Mile, the original City of London. Now most of the walls have gone and fewer than seven thousand people live here, but nearly half a million of us commute to it each day. You have eight hundred and fifty officers taking care of this tiny plot of land. That’s a massively disproportionate ratio compared to anywhere else in the country. Why?

‘Because the City of London is still what it has always been: a money factory. A 24/7/365 financial dynamo. And that’s why most of you aren’t strolling the streets with truncheons but working in offices to prevent money laundering, fraud and corruption. There’s only a handful of private owners in the Square Mile, and most of them don’t even live here. They don’t need you looking after them. So, why do you need the Peculiar Crimes Unit?

‘Because we perform a unique, invisible service. In many ways, we operate more than half a century behind the rest of you, because that’s when our sphere of operations was first decided. We’re not constrained by your rules. We use our own judgement. Our task is to prevent public disorder. That includes investigating any serious crimes that take place in public spaces. Because if we don’t find fast solutions, the city loses that most quicksilver of all intangibles: confidence. And without the light of confidence we plunge into the darkness of uncertainty, which leads to financial ruin. There’s nothing more frightening than watching what people do when they start to lose money.

‘Which is why I’m asking you to increase the PCU’s funding in this coming year. Because our unit is buying you something which no one else can provide in London: stability and peace of mind in increasingly unpredictable times.’

MEMO FROM RAYMOND LAND TO ALL STAFF

(
See attached.
) Well, we all know how well that speech went down. Like a French kiss at a family reunion. Our budget got slashed by nearly a third. I had no idea Bryant was going to bring out the begging bowl. It’s just not done. It didn’t help that he forgot the rest of his speech and then sat in the mayor’s wife’s lap.

Serious crimes in and around the Square Mile are down because the residential population is falling. This might have something to do with the fact that every half-decent flat in the area has been snapped up by war criminals shovelling their loose change into safe havens. Nobody lives here any more. The lights are going off in the Square Mile, so the thinking goes that we can get by on less.

What does this mean to you lot?

It means there’ll be cutbacks on our outsourced services, effective immediately. A wage freeze, and no more talk of performance-related bonuses. No more sending your clothes over to forensics to be dry-cleaned, no more running up kebab tabs on stakeouts and no more pawning items from the Evidence Room until payday. It’s the end of transport allowances, petty-cash chits and any other salary-enhancing initiatives your crafty little minds can come up with. In fact, I distrust the word ‘initiative’ altogether; it only leads to trouble. I don’t want anyone here thinking for themselves.

But remember this: we are in charge of London.

The Metropolitan Police Service may get to play with helicopters, but they also do all the paperwork and hold all the management meetings, which is why it takes them six hours to log a simple case of abusive texting. The City of London Police fanny about with PowerPoint presentations outlining initiatives that don’t work, and get to shift decimal points around sorting out cybercrime with our dopey European cousins. But it’s the Peculiar Crimes Unit that prevents panic on the streets. We handle the cases that have the capacity to bring this city down. Never forget that. When it comes to preventing public disorder and stopping our polluted, litter-strewn metropolis from falling apart at the seams, we’re on the bloody front line. It’s not our public-school twit of a mayor or his cronies who carry the can, it’s us. This isn’t a job, it’s a vocation, and nuns don’t get paid so we should count ourselves lucky. I’m sorry, but being underappreciated really gets my goat.

Right, time for a bit of housekeeping:

Halloween is not a pagan festival that entitles you to a day off, despite what Mr Bryant may tell you. It’s a retail opportunity created by the Yanks to flog orange plastic buckets to children. You’ll have to settle for proper holidays like Boxing Day. If this country had stayed Catholic we’d be taking every other day of the year off like the Frogs, and look at the bloody mess they’re in.

Now that we’re under City of London jurisdiction may I remind you that we are once more a covert division, which means no more Facebook, Twitter or blogging about how wretched your lives are, no selfies at crime scenes and absolutely no more privately published volumes of candid memoirs. I’m not mentioning any names, but you know who I mean. The less the public know about us, the less stick we’ll get. Try not to draw attention to yourselves. When you head off to the pub together in your matching black unit jackets you look like an out-of-shape version of the
Reservoir Dogs
poster, and given the public’s current antipathy towards us I’d rather not encourage them to stick burning bags of shit through our letter box again, if you don’t mind.