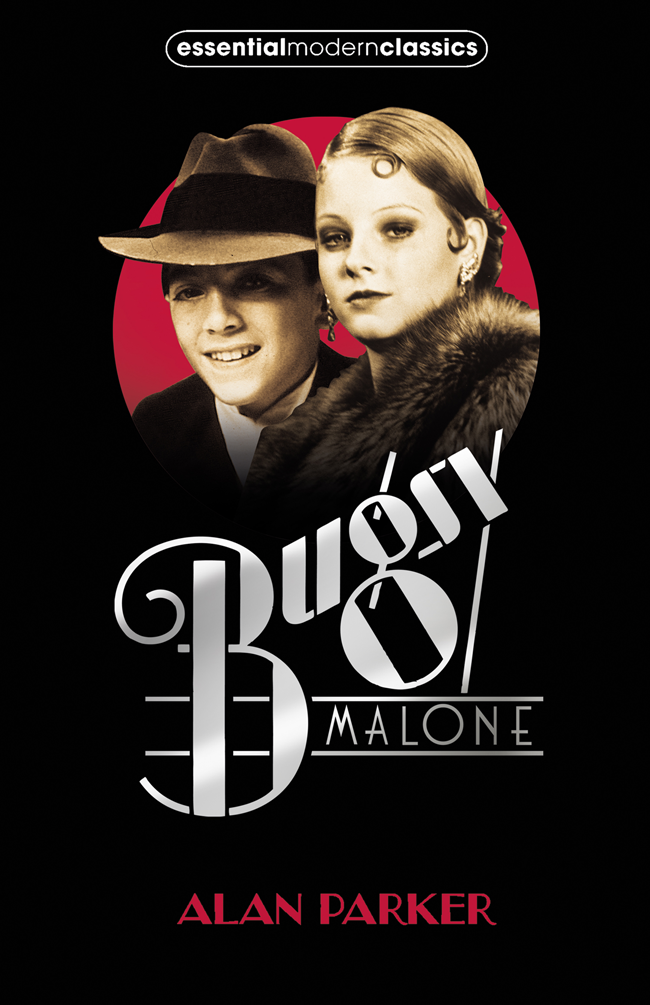 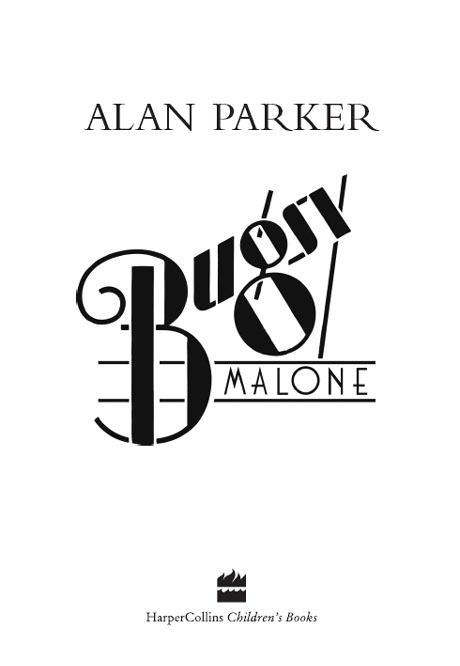 For Lucy, Alexander, Jake and Nathan, who heard it first.

Why You'll Love This Book by Lauren Child

16.
Looney (Off His Trolley) Bergonzi

By Way of Explanation

Someone once said that if you can open with a really good first line then you are halfway to writing a really great book. The opening sentence to
Bugsy Malone
is one of my all-time favourites.

Someone once said that if it was raining brains, Roxy Robinson wouldn't even get wet.

This is a perfect first line.
You know right away that there's going to be some snappy dialogue and some hardboiled characters. It also has a sort of âback in the olden days' feel to it, and the name Roxy Robinson somehow suggests gangsters and old-time New York. But above all, what this one line tells you is that this is going to be a funny book.

I saw the film of
Bugsy Malone
when I was about ten. We were in Norfolk for my cousin's wedding, the weather was dismal and we had a free afternoon with nothing to do so we all went to the cinema. My whole family went, including my cousins, my aunt, uncle, great-aunt, great-uncle and grandmother. We all loved it. Those of us who are still alive still talk about it. We still quote lines from it.

Of course
Bugsy Malone
is a great film, but it's also a great
book
. It reads beautifully. The characters â and there are a great many of them â are all described in such a way that in just a few lines you feel you could almost draw them:
she had the kind of face that needed a personality behind it. She was built like a Mack truck and her shoulders would have done credit to an all-in wrestler.

The names are pretty descriptive too; Pop, Fizzy, Jelly, Bangles, Tallulah. I meet quite a few Tallulahs these days â goldfish and children â which isn't surprising because, as characters go, Tallulah isn't a bad one to be named after. She is sassy and bewitching and snaps out great one-liners:
“I'll go manicure my gloves.”

That's the thing about this book, the female characters are given good roles too, they aren't just there to wander in and out of scenes without too much personality. As a child I was always rather fond of Blousey Brown. She might be the romantic interest but she's no sap, that's for sure.

Bugsy:
Can I give you a lift?

Blousey:
You got a car?

Blousey:
So how you gonna give me a lift, buster? Stand me on a box?

We don't get to meet Bugsy until chapter four, it's a nice way of building him up; we know we're
going
to meet him because his name is, after all, the book's title â somehow not meeting him right away makes him all the more charismatic.

Bugsy Malone is that perfect hero, antihero. He has edge but we know he's a decent guy. He is just the right side of honest, but every now and then push comes to shove and he has to step over the line. He's a nice-looking fellow but he's not vain. He's got style but it doesn't have to do with what he is wearing â his suit isn't great â money is certainly on the tight side but he gets by. One of the things that make Bugsy such an appealing character is that he is aware of his shortcomings but he doesn't let them hold him back.

The barman fingered the lapels on Bugsy's crumpled jacket. “I don't think much of your suit,” he said at last.

“You've got too much mouth.”

His cool has to do with his confidence. This is not a man who spends too much time thinking about tomorrow. He orders what he wants and hopes he can come up with a way of paying the diner bill by the time he has taken his last slug on his Banana Boozle.

Bugsy is the central character, the lynchpin, everyone's go-to guy, the only one who can possibly outwit Dandy Dan, the smooth, calculating gangster villain who wages war on Fat Sam and attempts to bring down his little empire. Fat Sam himself is a loveable klutz, not the sharpest knife in the drawer but smart enough to run the slickest joint in town, and bright enough to recognise when he needs to call in the help of someone far brighter than he.

The plot has edge and moves along with great pace but never neglects the detail, far from it; it indulges in the detail, describing scenes with such perfect ease and comic accuracy that you feel you know this world, these people. Descriptive character-building scenes are so often skipped over in action plots and I always think it's a shame; to me these are the best bits. Funny interactions, flirtatious conversations â the pauses between â are what provide the suspense and make you engage with the characters. But what I like best of all about this book is the dialogue which Alan Parker has a genius for. It's got such personality; charming, funny, snappy and totally believable.

Why should you read this book? Because if you don't I might just keep quoting great lines at you until I have told the whole story. I am a big fan of
Bugsy Malone
and if anyone had ever told my ten-year-old self that one day I would be writing the introduction to this book I would have probably fallen off my cinema seat.

Multi-million copy bestseller Lauren Child is best known for creating the hugely popular
Charlie and Lola
and the
Clarice Bean
series. She has won numerous awards including the prestigious Kate Greenaway Medal and the Smarties Gold Award. Her books have been published in many languages, with runaway success.

S
OMEONE ONCE SAID
that if it was raining brains, Roxy Robinson wouldn't even get wet. In all of New York they didn't come much dumber than Roxy the Weasel. In short, Roxy was a dope â and he fulfilled people's expectations of him by taking the blind alley down the side of Perito's Bakery, on the corner of East 6th Street.

Overhead, the rusty, broken gutter turned the rainwater into a nasty brown liquid that gushed out on to the sidewalk below. It had been raining all night, and a sizeable pool had formed. Roxy's frantic feet disturbed the neon reflections. He felt the icy water seep through his spats and bite into his ankles. He'd been running for a dozen blocks, and although his legs felt strong, his lungs were giving out on him.

He skidded to a halt as he noticed the wall at the end of the blind alley. Anyone else would have seen it a hundred yards back, but not Roxy. Whatever passed for a brain between his ears whirled into action as he considered his options. He ducked into a doorway. At the end of the alley, the red neon light glowed and dimmed in time with Roxy's heartbeats, and the big reflected letters of
âPerito's Bakery'
spread across the wet road. Roxy's heartbeats moved into second gear as four black shadows appeared and gobbled up the red neon.

Roxy had spent his whole life making two andÂ two into five, but he could smell trouble like other people can smell gas. The four shadows became sharper as they gave way to four neatly pressed suits. They looked as snazzy as a Fifth Avenue store window â only these guys were no dummies.

Roxy collided with a trash can as he started running again. It clattered loudly on to the sidewalk, disturbing the slumber of a ginger cat, which scooted across his path. Roxy reached the wall in seconds, desperately clawing at the bricks to get a handhold at the top. But it was too high and Roxy was no jumper. He turned to face his pursuers.

They advanced together, their violin cases dangling at their sides, like a sinister chorus line. Ten yards from him they stopped. The cases opened. Click. Click. Click. Click. Roxy blinked, in unison, and a bead of sweat found its way out from under his hat brim and dribbled down his forehead. From their cases, the hoods took out four immaculate, shiny, new guns. Roxy stared at them in disbelief.

Suddenly, one of them spoke.

Roxy nodded. His own name was one of the few things he had learned in school.

“Roxy Robinson?” The hood's voice spat out once more. “You work for Fat Sam?”

Roxy's adam's apple bobbed around frantically in his throat as if it was trying to find a way out. He managed to force his neck muscles to shake his head into a passable nod.

It was all the hoods needed. Almost immediately, the wall was peppered with what can only be described as custard pies. Roxy briefly eyed the sight, not quite believing his good fortune. His optimism was short-lived as a large quantity of slimy, foamy liquid enveloped his sharp, weasel-like features. His ears protruded like toby hug handles from the creamy mess.

The hoods clicked their violin cases shut, turned, and with a confident strut walked back up the alley. The splurge fun had claimed its first victim â and whatever game it was that everyone was playing, sure as eggs is eggs, Roxy the Weasel had been scrambled.

Not Your Ordinary Housewife: How the man I loved led me into a world I had never imagined by Stern, Nikki
War of the Spider Queen 2 - Insurrection by Forgotten Realms
Magical Lover by Karilyn Bentley
Catherine: One Love is Enough (Catherine Series Book 1) by Juliette Benzoni
Josie Under Fire by Ann Turnbull
Hosker, G [Sword of Cartimandua 10] Roman Hawk by Griff Hosker
Saint Nicholas by Jamie Deschain
Historia de España contada para escépticos by Juan Eslava Galán
Fascination -and- Charmed by Stella Cameron
A Demon's Dark Embrace: An Elite Guards Novel by Amelia Hutchins