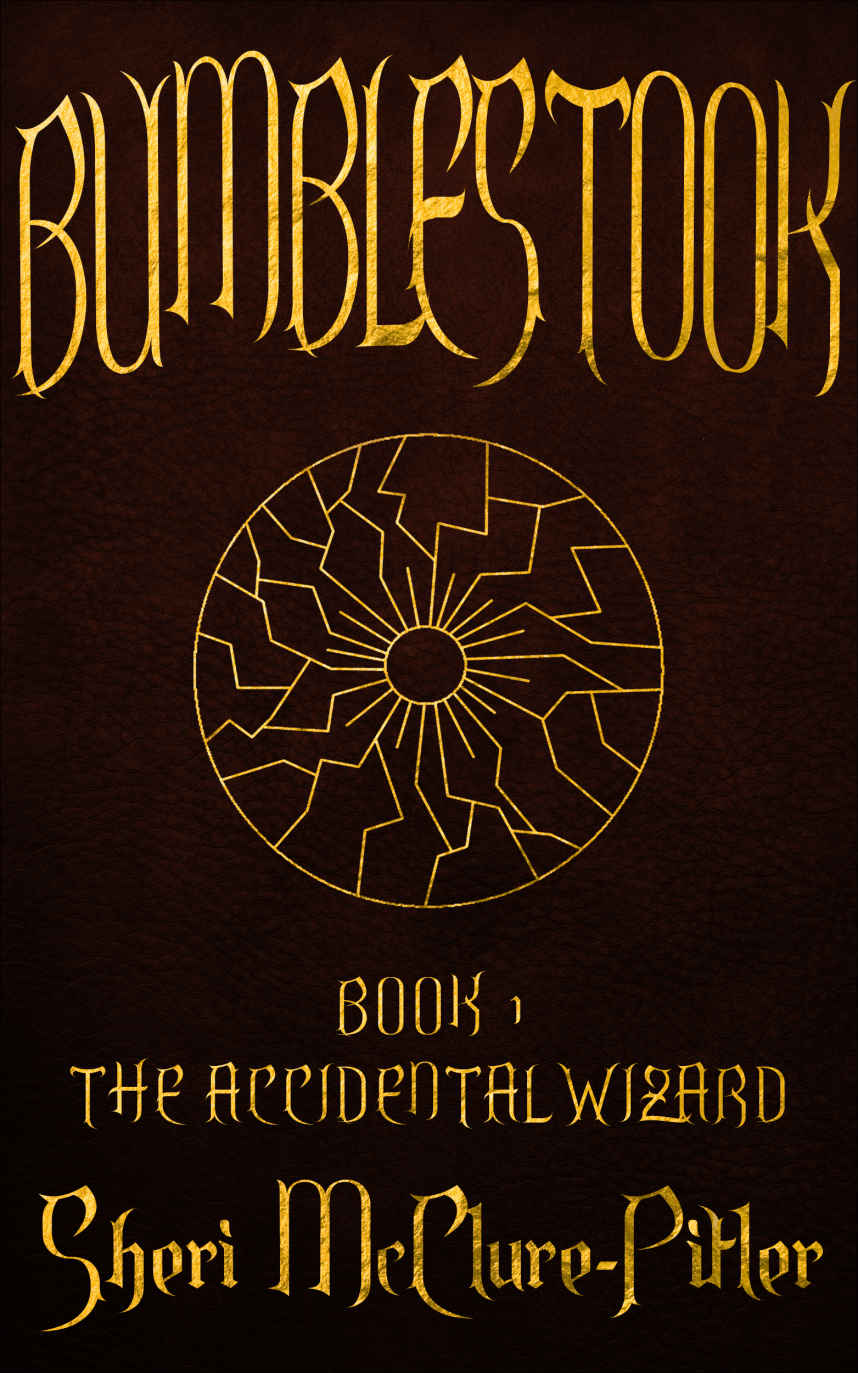 This book is dedicated to the memory of my father, Warren L. McClure, a true Wordsmith, whose passion for and dedication to the written word, was its own kind of Magic.

The Book sits upon its throne,

shot through and through with threads of gold,

carved with mysterious runes of olde.

The Book itself is four hands thick,

as if it were for Giants writ.

rhinoceros tough and twice as strong.

The hide with which the Book is bound,

is on no earthly creature found.

to open the cover and crack the spine.

But wait! Do not your pitiful weakness bemoan!

See now, it opens on its own!

The pages, light as onion-skin feel,

yet each as indestructible as steel.

So swift they turn and flutter by,

with sound akin to the North Wind’s sigh,

there is no opportunity,

to read the words of mystery.

But lo! The pages cease to turn,

and now at last a chance to learn.

You look, you scowl, you turn away,

This page is blank, you crossly say.

I implore you, see there, look again!

Behold! Without benefit of pencil or pen,

nor even chalk, nor even hand,

the words appear; It began…

CHAPTER 1
A Most Peculiar Ceremony

It began at twilight, that mystical, magical, in-between time; no longer day, yet not quite night. The foothills of the San Gabriel Mountains rose, like silhouettes of sleeping giants; casting long, dark shadows deep into the backyards and gardens of the small, Southern Californian town, lying huddled at their feet.

In one such garden, tall, thin Cyprus trees marched along stone walls, eight feet tall; creating a hidden world, sheltered from the noise of the neighborhood. Outside the walls, couples laughed and talked, as they embarked upon their evening stroll. Kids on skateboards and scooters vied for sidewalk space and the occasional siren was echoed by neighborhood dogs. Inside the garden, deep, purple shadows slunk about the edges; shrinking from the soft, welcoming glow emanated by amber-glass lanterns, hung on wrought-iron shepherd crooks.

A cobblestone path led into the garden from the back yard. It passed beneath a flowered arbor before branching off in several directions, offering a choice of paths. One offshoot led through the center of the garden, where a fountain chattered away in the murmurs, burbles, and gurgles of fountain-speak. The central figure, arising from a white marble basin, was a coiled sea serpent carved from a single block of serpentine. Remarkably lifelike details in fins and scales were magnified by rivulets of sparkling water, trickling down its sinuous body. The face was similar to that of a Chinese dragon, with long, sly eyes and a wide-open mouth. It grinned with fanged delight, as the water gushed up and over its forked serpent’s tongue.

Another path wound its way through islands of carefully planned flowerbeds, each containing some item of interest or curiosity, half-hidden among the plants on display. In one, a bronze gazelle daintily picked its way through tall, feathery, pampas grass. In another, a large, granite tortoise shoved its blunt nose into a clump of ground-hugging ice plants. Nearby, twelve little cricket cages formed a miniature village, under a towering stand of rare, black bamboo.

The third path led to an old stone bench, its legs roughly carved in the likeness of two craggy-faced gnomes. The seat was empty but for a small plastic object; a blue baby’s rattle in the shape of an elephant, looking very much out of place amongst the natural artifacts of the garden.

In front of the bench, was a small pond, its surface littered with lily pads. The water rippled as a pair of colorful koi surfaced; mouths opening and closing repeatedly with soft, wet, popping sounds, as they searched for water-skimming bugs.

Suddenly, the water of the pond bubbled and frothed, as a dark creature arose from the depths, clawed its way onto dry land and stood motionless; dripping onto the cobblestones. It was less than three feet tall, with skin as dark and pitted as a flow of cooled lava. Its features were clumsily formed, like those of a child’s sculpture. The mouth was a gash, the nose a triangular lump with mere slits for nostrils. Two dark holes were all that represented the eyes. Its hands resembled oversized lobster claws, while the feet were but misshapen bricks stuck on the end of bowed legs. Around its neck, it wore what appeared to be four large bubbles, strung on a seaweed necklace. Inside each, a colorful, gaseous substance whirled and swirled with a life of its own.

One of the bubbles began to bob wildly, as the fluorescent-green gas trapped within became agitated; assaulting the thin, translucent wall. The bubble popped and the escaping gas flowed upwards, into the creature’s nostrils. Two green pinpricks of light appeared in its orbless eyes. It shuddered, as if awakening from a deep slumber, then turned slowly toward the stone bench.

Staggering forward, it began clumsily dragging one shapeless foot after the other. At the end of its stiff arms, the clawed hands opened and closed with mechanical precision. As it neared the bench, one of the claws closed on the edge of the seat, leaving twin grooves in the stone surface. Abruptly, it stopped as the light in its eyes died out.

Another of the bubbles bounced against the dark creature’s chest, as the purposeful, purple fog inside struggled to escape. Within moments, it broke through; flowing upwards into the nose slits. The eyes lit up again (this time with a matching purple glow) as the creature shuddered back to life. It raised one clawed hand to its chest, to pluck a strand of seaweed from the necklace. A third bubble dangled from the slimy string. The creature proceeded to place it into the black, cave-like opening of its mouth. The bubble popped, releasing an obnoxious yellow fog. The fog issued forth, enveloping the baby rattle on the garden bench. The gas cloud flickered briefly as tiny bolts of lightning struck the rattle, before dissipating into the night air, leaving the toy apparently unharmed. Once again, the creature hesitated and ground to a halt, as the light in its eyes faded.

The fourth and final bubble jiggled and bounced and burst, sending a stream of red gas snaking upwards, into the creature’s nostrils. Red lights glowed in the eye sockets, as it turned slowly and staggered back to the pond. Once there, it quickly began to erode from the top down; its dark, pitted substance turning to ash and blowing away in the light summer breeze. The seaweed necklace fell into the pond with a splash. Soon, there was nothing left of the creature, but a smudge of grey ash at the edge of the pond.

Footsteps rang out on the cobblestones, as a man passed through the flowered arbor and chose the path leading to the garden bench. He was tall and slender with a smooth, pleasant face and sandy hair. His hazel eyes were flecked with green and gold. As he bent down to pick up the baby rattle, he noticed the scratches on the edge of the stone bench. He paused, frowning; reaching out to brush them with his fingers.

“Lance, did you find it?” A woman’s voice, high and fraught with worry, called out.

“Er, yes—got it!” The mysterious marks forgotten, the man grabbed the rattle and hastened to meet the woman at the entrance of the garden.

A Prince Among Stones by Prince Rupert Loewenstein
The Dain Curse by Dashiell Hammett
The Wicked One by Danelle Harmon
Circle of Flight by John Marsden
Brown, Berengaria - Possess Me [Possessive Passions 2] (Siren Publishing Ménage Amour) by Berengaria Brown
The Inheritance by Tamera Alexander
By Myself and Then Some by Lauren Bacall
NFH 03 Checkmate by R.L. Mathewson
Bones of a Witch by Dana Donovan
We Have Always Lived in the Castle by Shirley Jackson