By The Sea, Book Three: Laura 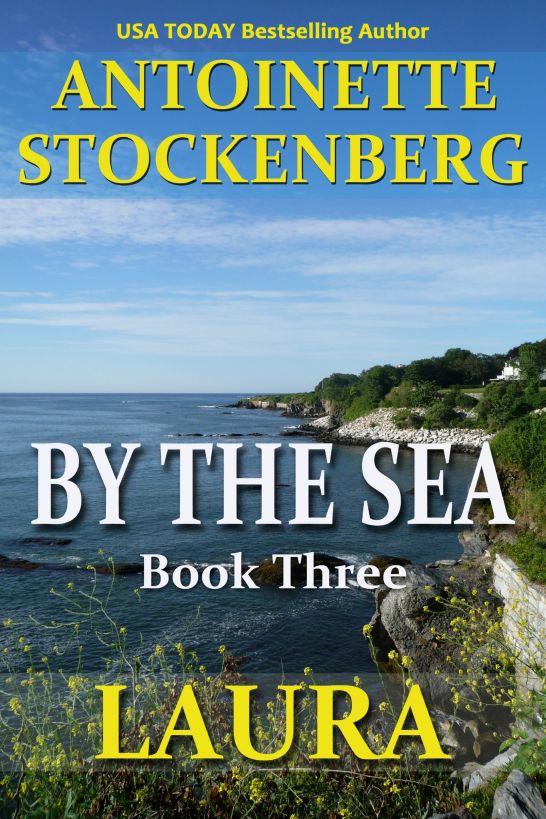 BY THE SEA Series

In the tradition of Upstairs, Downstairs and
Downton Abbey, BY THE SEA is a four-book series that sweeps from
the Gilded Age through the Gatsby Era's Roaring Twenties and then
on to the Great Depression, culminating nearly a century later in
Newport, Rhode Island, wealthy and alluring "City by the Sea." Set
against a backdrop of mansions, the glorious America's Cup Yacht
Races, and new money, the series traces the passions and adventures
of three families from three different classes.

Book One
:  TESS.
From the wild
decadence of late nineteenth-century Newport comes the tale of Tess
Moran, a beautiful Irish housemaid in one of the grand summer
"cottages," who makes a dark bargain with a man of commanding
wealth — and falls in love in the bargain.

Book Two
:  AMANDA.
Marrying
American money to an English title is a tradition of its own; but
Amanda Fain, a brash heiress with money to burn, has a fondness for
Bolsheviks and bootleg liquor that makes her an unlikely match for
the reluctant, ironic, and impoverished English aristocrat Geoffrey
Seton, who has been ordered to America to find someone who can pay
the bills for the family estate back home.

Book Three:
LAURA.
While the
Great Depression grinds relentlessly on, Laura Andersson, a
Midwestern farm girl with an improbable love of the sea, embarks on
a bold adventure that promises riches but delivers passion, one
that threatens all she holds dear.

Book Four:
THE HEIRS
is the
dramatic conclusion to the four-book series BY THE SEA.
Economic hard times are a distant memory in high-flying, recent-day
Newport, home of the oldest and most prestigious trophy in the
world, the Holy Grail of sport--the America's Cup. Here, the
descendants of Tess, Amanda and Laura play out their destinies,
their paths crossing in unforeseen ways:  Mavis Moran, Neil
Powers, his daughter Quinta, and America's Cup skipper Alan Seton
all find themselves caught in a web of mystery, sabotage, and
conflicting desires.

"A quality novel [that]
contains many of those little epiphanies, those moments of
recognition.  [Part 1, TESS,] is what makes Stockenberg's book
stand out from the rash of novels on class conflicts between Irish
servants and their Yankee masters."

"This was my first Antoinette Stockenberg novel.  I read it
not long after it was published ages ago, but her writing is so
vivid I can still picture some of the scenes from the novel. This
[was written] before the ghost or mystery plots were woven into her
novels: it is purely a story of life and relationships. I have been
a huge fan ever since."

This is a work of fiction.  Names,
characters, places, and incidents are either the product of the
author's imagination or are used fictitiously, and any resemblance
to actual persons, living or dead, is entirely coincidental.

By the Sea, Book Three: LAURA
Copyright © 1987 by Antoinette
Stockenberg

Original title: The Challenge and the
Glory

BY THE SEA Series

More for your e-Reader by
Antoinette

An Excerpt from BY THE SEA, Book Four:
THE HEIRS

An Excerpt from
A CHARMED
PLACE

Like Robert Louis Stevenson before her,
Laura Andersson traveled not to go anywhere, but to go. Life to her
was an excuse to move, and from the day she first stood up and
teetered forward on her own two wobbly legs, she never looked back.
Her mother was forever chasing after her, and her father, a
Minnesota farmer all his life, used to scratch his head and wonder
where his daughter could have caught the fever: wanderlust. She had
it bad.

When she was three Laura managed to climb up
a rotten stepladder, across a rain barrel, and onto the back of the
family plow horse. Mrs. Andersson found her daughter half hanging
from the horse's mane as the good-natured mare ambled across the
farmyard, scattering geese and chickens in its path. Laura told her
mother that she was on her way "to the ocean." Her parents laughed
softly over it that night as they lay in one another's arms and
wondered which of her story books had put such notions into their
little girl's head.

When she was thirteen, Laura tried again,
and this time she frightened both her parents and the other one
hundred and forty-three residents of Danske out of their wits. As
nearly as they could make out afterward, Laura had talked her way
into the front seat of a produce motor-truck bound for Chicago. But
somewhere in Fillmore County the well-intentioned driver got cold
feet, and he put his passenger ashore, so to speak. The townspeople
looked at Laura coolly after that, although her two younger
brothers were wildly jealous of her adventure and pulled her dark
braids every chance they got, and pinched her under the supper
table.

Her next real attempt to reach the ocean (no
one ever took her years of whining to go abroad very seriously)
came when Laura was twenty. She'd just graduated from a normal
school and had already accepted a job to begin teaching in Danske
in the autumn. Then came a better offer.

"But you're still a child," her mother
complained as she plucked a freshly killed chicken on the white
enameled worktable in her country kitchen. "Tisn't right to go off
gallivanting around the country unchaperoned."

"I won't be gallivanting around the country,
mama. I'll be gallivanting down the coast. And I will be
chaperoned—at least, once we're in Havana. Aunt Olga will take
perfect care of me."

"Oh, I'm sure! A woman I've never even met!
And what's she doing in Havana, I'd like to know, when by rights
she belongs in Stockholm? Aunt Olga, my foot! She's only your third
cousin, if that, and she's a scant six years older than you are. If
your father was alive he'd tell me to my face that I was crazy,
letting you go." Harriet Andersson set her mouth in a grim line and
yanked another feather from the hapless chicken's breast. "Why
can't you ever stay put?" she added inconsequentially.

As it turned out, Laura's cousin Aunt Olga
never got the chance to prove her mettle. Laura made her way,
mostly by rail as planned, to New York. From there she had intended
to ship with nine other passengers aboard a freighter to Cuba. But
she never made it past the
Virginia;
she never made it past
Captain Sam Powers.

The captain, a brawny six-footer with thick
sandy-gray hair sticking out from under a seaman's cap, was
offloading barrels of case oil, with the help of a smallish,
dullish crewman, from the deck of a two-masted coastal schooner
docked not far from Laura's Cuba-bound freighter. Laura noticed the
sailing vessel—so hopelessly anachronistic among the steam-driven,
rust-bucket freighters—as she was picking her way along the piers,
one eye on the young stevedore she'd paid to haul her brand-new
steamer trunk for her. The
Virginia
was small, maybe
seventy-five feet, but the offloading was going on at a frenetic
pace.

Suddenly the captain bawled out "AVAST!"

What avast meant, Laura had no idea, but it
seemed prudent to stop and find out.

The captain rushed toward his crewman, but
it was too late: the boom tackle pennant parted, and a barrel of
oil fell crashing at Laura's feet, splitting open like a watermelon
and splashing her new white dress from neck to hem with case
oil.

"Oh no! OH!" sputtered Laura, looking down
at her dress, aghast.

"That about does it, Twitch. You're no more
use to me than a harp seal!" the captain said angrily. "You have
ten minutes to get your sea-bag out of here and now it's nine!"

Poor Twitch hunkered down as best he could
before the hailstorm and managed a timid, "But what about my wages,
cap'n?"

"Your wages be damned!" bellowed the other.
"Consider yourself blessed that I don't strip you of what little
you own to pay for that barrel of oil. Now git!"

"What about my
dress?"
moaned Laura,
conscious that her timing could have been better.

"What about it?" roared the captain, turning
on her from his quarter-deck.

"Hang about the docks in white, that's what
happens. If I've said it once, I've said it twice: you ... girls
... ought to dress more practical."

Something about the tone of his voice and
the look in his eye told her what kind of girl he thought she was.
"I'm not a
girl.
I'm from Minnesota," she said with frigid
correctness.

"I guess there are
girls
in
Minnesota, too," he answered calmly, letting his glance slide along
the oil slick down the front of her dress.

"Now you just listen to me, mister: I'm not
one of your dockside floozies; I'm a paying passenger bound for
Cuba and I want a new dress!"

But the good captain had cargo to unload,
with or without Twitch, and after considering Laura for all of four
seconds, he turned back to it.

"I want a new dress!" It wasn't vanity that
made Laura stand her ground, or even wounded pride. It was her
sense, utterly Midwestern, that a person is responsible for his
actions. "You won't get away with this," she added loudly when the
captain continued to ignore her. "I'll speak to the port
authorities."

Laura turned to the fidgety stevedore who
was standing beside her trunk and turned up her voice to a hundred
and thirty decibels. "Where can I find the harbormaster's
office?"

"Well, by gad, she's a Minnesotan after
all." It was muttered by the captain in a perfectly audible voice,
and Laura turned to meet it.

"What's
that
supposed to mean?"

He pulled his cap down a little more
righteously over his brow and squinted through sea-blue eyes at
her. "I've heard tell that Uncle Sam gives you folk out West land
for nothin', and food, and jobs as like as not. Well, out East we
earn everything we get. No one's ever given me a board-foot o'
plankin', or a single trunnel, come to that, if I haven't sweated
for it first. And if a bolt of lightning splits my topmast in two,
it wouldn't do to go whining to the 'authorities,' now, would it?
But go ahead. Run to the harbormaster. Tell 'im I spoilt your
frock. If it makes you feel better, tell 'im." He gave Laura a
long, level look and something inside her tightened.

"Do you have a better idea?" she demanded,
with not as much indignation as she would have liked.

"We could discuss it."

And so began negotiations which ended in
Laura's getting her white dress after all, the one she wore to her
wedding ceremony two days later at the small chapel not far from
the Seamen's Institute. If someone had told her that she would not
be a virgin when she married, that she'd marry a man with only a
grammar-school grasp of reading and writing, and no grasp at all of
history or culture, that she would conceive a child at sea, bear it
on land, and suckle it days later at sea again—well, she might have
smiled her hazel-eyed smile and said, "I wouldn't be
surprised."