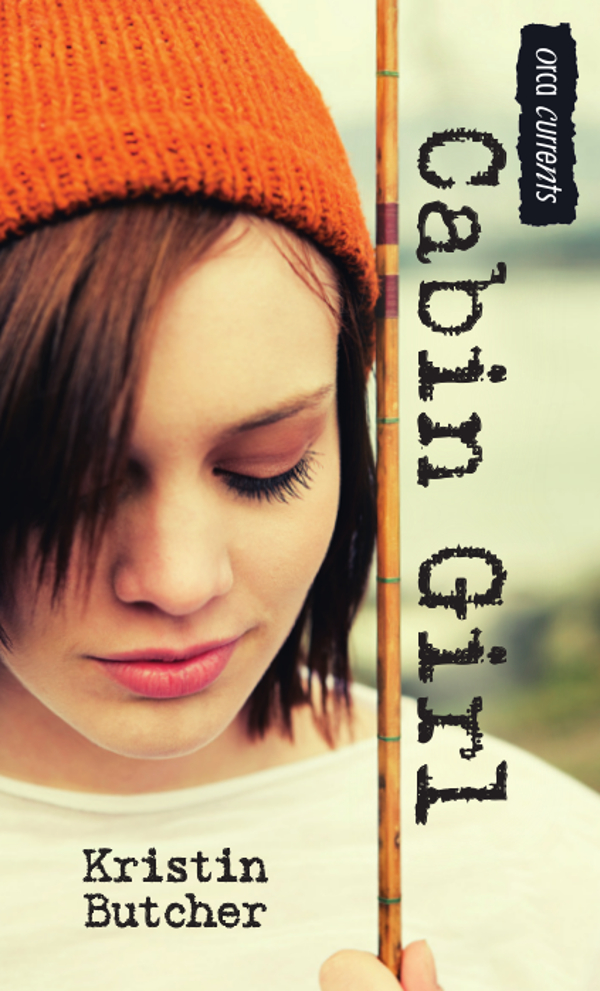 Summary:
At her first job, Bailey learns about workplace bullying.

For Alan and Helen,
with thanks.

Flying in a Beaver floatplane is like being deafâonly louder. Mrs. Watkins and I don't even try to talk over the engine noise. We peer through our portholes at Mother Nature's crazy quilt of sun-soaked lakes stitched with forest. The plane is so low, I can see its shadow on the water.

I have butterflies in my stomach. Not because of flying. I've flown dozens of times. I've even flown to Witch Lake but always as a guest. This time I'm going as an employeeâthanks to my godfather, Gabe Rutherford. He owns Witch Lake Lodge, and when he offered me a summer job as cabin girl, I jumped at it. I'm going to be cleaning toilets, changing beds and mopping floors. It's not exactly glamorous, but I don't care. I'll be making money. Even better, my parents won't be there. Freedom, at last!

Jim, the pilot, nudges Mr. Watkins and points out the cockpit window. I crane my neck, but the nose of the plane is so high, all I see is blue sky. As if reading my thoughts, Jim lowers one wing and banks left. And there it isâWitch Lake.

It looks different from the air. The first thing I notice is the red-roofed lodge perched on a hill. A deck dotted with yellow umbrellas stretches its entire length. It looks like a giant flower box. The guest cabins are arranged in a tidy semicircle behind the lodge, their paths connecting to the main building like spokes of a wheel. Outbuildings are scattered in out-of-the way corners. Staff quarters line an isolated path leading into the bush. A wide gravel walkway and lush green lawn roll down the hill from the lodge to the lake. It's the middle of the day, which means guests and guides are out fishing, leaving the dock abandoned except for a couple of boats tied to one side. Parked nearby is a trailer hooked to an
ATV
. Two men are leaning against it. They shield their eyes and look up. One of them is Gabe. I smile and wave, but he doesn't see.

By the time the Beaver taxis in, the place is hopping. The trailer has been backed onto the dock. And two young women, another guy and a big black Lab have shown up. Even before the plane comes to a full stop, Jim jumps out and helps Gabe secure it. The Labâwhite-muzzled and heavy with ageâwags himself over to Jim. He sniffs the pilot's pants pocket and pushes his nose into his hand. When Jim ignores him, the Lab lifts his head and barks.

Jim laughs and scratches behind the dog's ears. “Can't fool you, can I, old man? Here you go.” He reaches into his pocket and offers the dog a treat. Then he scratches the Lab's head again and croons, “Good boy, Sid.”

Gabe helps Mrs. Watkins out of the plane, and I jump down behind her. Gabe smiles. “Good to see you, Bailey. It's gonna get busy around here real quick. I hope you're ready.”

Without waiting for me to reply, he gestures to the two women standing near the end of the dock. They hurry over. Close up, I see they are younger than I had first thought, probably no more than a few years older than I am. One is tall, blond and athletic looking. The other is tiny, dark and very tanned, which makes the scar zigzagging down her cheek and neck look like white lightning.

“This is Meira and April,” Gabe says. “They're our waitresses. They'll introduce you to the other staff and help you get a feel for the place.”

I smile shyly. The waitresses do the same.

“April,” Gabe says to the one with the scar, “Bailey is going to be your new cabin mate. I'd like you to help her get settled in.” Then he turns to Meira. “Let Cook know that Mr. and Mrs. Watkins plan to fish this afternoon, but they need lunch first.” He calls to the older man he was standing with earlier. “Ed, tell Josh to get his boat ready. Drake,” he hollers to the guy loading luggage onto the trailer, “after you take those bags to cabin four, come back and pick up supplies for the kitchen.” He touches my arm and smiles. “Sorry for the rushed welcome, but that's how it is around here. I'll talk to you later.” The next thing I know, he's walking the new guests up to the lodge. I get that he's busy, but it doesn't stop me from feeling abandoned.

Within seconds the dock is empty except for April and meâand Jim, who's unloading boxes from the plane. Even the dog has wandered off.

“Come on,” April says. “Get your stuff and follow me.”

I heave my bulging backpack onto my shoulder and grab the handle of my suitcase. It limps over the boards of the dock like a train on a rickety track.
Clickety, clickety, clickety
. I breathe a relieved sigh when it finally rolls onto the gravel path. Even though it's tougher to pull now, it's quieter.

“Hey, wait up!” I yell to April, who is already way ahead and marching like she's in some kind of walking race.

She stops, turns and shakes her head. “You're going to have to move faster than that if you're going to last around here,” she says when I catch up.

“How about you carry the backpack and haul the suitcase and let's see how fast you move?” I retort.

To my surprise, April smiles. “Sorry. I'm used to doing everything in a hurry. It can get pretty hectic around here. If you're not in shape now, you will be soon. Here, gimme your backpack.” It's practically as big as she is, but she tosses it onto her shoulder like it's filled with feathers and points toward the bush. “Our cabin is just up that trail.”

It's only a three-minute walk, but after fighting with my suitcase the whole way, I'm exhausted. Even so, when I spy a penny in the grass, I bend down to get it.

I hold up the coin. “See a penny, pick it up, and all day long you'll have good luck.”

She rolls her eyes. “You actually believe that?”

I shrug. “It can't hurt.” I kiss the coin, shove it into my pocket and follow April inside. She gives me the thirty-second tour.

The cabin is one big room, two if you count the bathroom. Though it's a log structure, its interior is drywall and the floor is tile. There are the usual bedroom furnishings, a few attic-reject paintings and a small table with a couple of mismatched chairs. And that's it for decor.

“Well, I don't see any spiders or cockroaches. That's good.”

April flops onto her bed. “And you won't either. I like things clean. I hope you do too. Otherwise you can move into the guides' bunkhouse right now.” She closes her eyes and shudders. “Guys are gross.”

April laughs. “You still live with your parents?”

“Sixteen. How old are you?”

“I gather you don't live with your parents?”

“No way.” She snorts. “I don't even know where they are. I've been on my own since I was fourteen.”

I feel my eyes widen. “Seriously? Like totally on your own?”

I don't know whether to be horrified or impressed. I like the idea of spending the summer away from home, but I can't imagine being on my own full-time.

April walks over to the mirror and starts brushing her hair. As she sweeps it from her face, my eyes are drawn to her scar. I don't want to stare, but I can't help it. I catch her watching me in the mirror and turn away self-consciously.

“No worries,” she says. “I'm used to people looking at my scar.”

“How'd you get it?” I know it's none of my business, but I blurt the question anyway.

“Motorcycle accident last year. I was in a coma for a couple of days. I got a ruptured spleen, some broken bonesâI now have a pin in my hip, and this scar.”

She shrugs. “It could've been worse.”

“The guy I was riding with got a funeral.”

Until a few days ago, I thought the worst sound in the world was the dentist's drill. My scalp starts to prickle as soon as I hear that high-pitched whine. But since I've been working at the lodge, the drill is a lullaby compared to my alarm clock. It's the kind you wind up. Instead of being coaxed awake by music, I'm jarred awake by clanging. At five thirty in the morning. Every. Single. Day.

I chuck the clock across the room. It crashes into the wall and clatters to the floor but goes right on jangling. I bury my head under the pillow. Finally it stops.

That's when I become aware of another sound. The shower. I peer out from my pillow toward April's side of the room. Her bed is already made. The shower stops, and I know that in a few minutes she'll emerge from the bathroom all smiles and sunshine. I hide under my pillow again. I hate mornings.

My little red wagon grumbles along the gravel path behind me. I don't think it likes mornings either. But apparently fishermen do. Why they have to be on the water so early is a mystery to me. The fish probably aren't even awake yet. Breakfast is served in the dining room at seven, so it's my job to coax the guests into life at six thirty with coffee and warm muffins delivered to their doors.

Pa-dumpf
. I look behind me. One of the baskets of muffins has toppled off the wagon.

Oh, yay. The morning is off to another wonderful start. In the five days I've been at Witch Lake, it's been one disaster after another. I've managed to break three cups, dump a huge container of glass cleaner, spill bleach on a stack of blankets and lose the key to the storage shed. I even accidentally locked Sid in one of the cabins. The poor dog was there all day. I felt really bad about that. And yesterday, my wagon hit a rut and tipped over, throwing its entire cargo of clean sheets into a puddle. Winnie, the laundry ladyâwho is also my bossâwas not impressed.