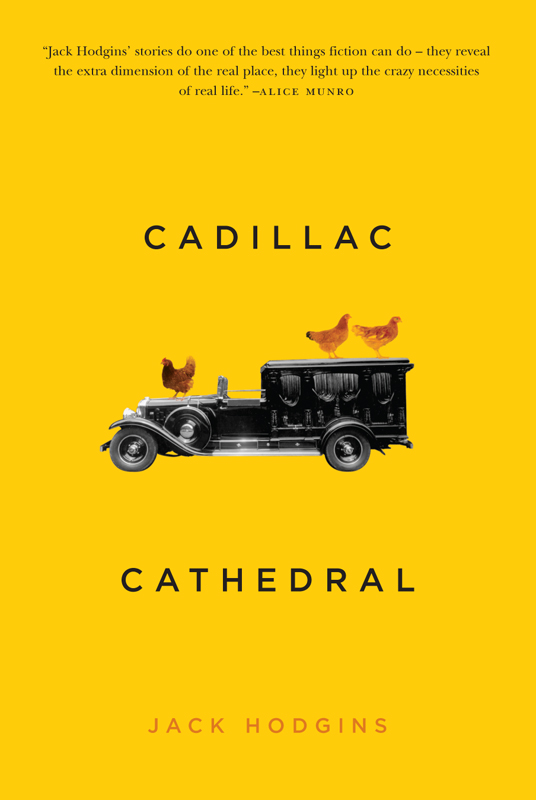 OTHER BOOKS BY
JACK HODGINS

The Resurrection of Joseph Bourne
(1979)

All rights reserved. No part of this publication may be reproduced, stored in a retrieval system, or transmitted, in any form or by any means, without prior written permission of the publisher, or, in Canada, in the case of photocopying or other reprographic copying, a licence from Access Copyright (the Canadian Copyright Licensing Agency).

At Ronsdale Press we are committed to protecting the environment. To this end we are working with Canopy (formerly Markets Initiative) and printers to phase out our use of paper produced from ancient forests. This book is one step towards that goal.

The author is grateful to the
Chor Leoni
Men’s Choir, Erick Lichte, and the late Diane Loomer for encouraging and producing a collaborative song-and-narrative performance based on an early version of this story.

The people, events, and places in this story are fictional. The community of Portuguese Creek is not to be confused with a real Vancouver Island community visited by a creek of that name.

HE WAS A MAN
in his seventies whose retirement years were filled with the pleasure of restoring cars and trucks that had been wrecked and then abandoned by those who could afford to replace them. From mountain roads and vacant lots he towed them home and got them running again for those who could not afford something off a used-car dealer’s yard. Having felt the frosty breath of old age on the back of his neck now and then, Arvo Saarikoski found pleasure in rebuilding old cars to something like their former selves — a miracle he could hardly manage for himself.

When friends suggested he take the opportunity to travel before he got too old, he waved the notion aside. He’d travelled
already
—
New Orleans, San Francisco, twice to the Baltic countries. Travel was exhausting, crowds were confusing, foreign countries were determined to empty your bank account. Worse, being carted around from place to place made him feel useless. He hadn’t been allowed to give the Norwegian tour bus a badly needed tune-up. He’d been prevented from examining the engine of the Louisiana paddle-wheeler, though he could tell it was in serious trouble while they laboured up a steamy canal.

Since he was determined not to travel any more, neighbours recommended a night-school class for seniors. It was never too late to learn something new. Bee-keeping. Photography. The history of labour unions. But he didn’t
need
a night-school class! Arvo was satisfied with what he was doing — what he’d been doing for years. You could see the results out there on the roads. A handsome ’38 Ford V8 he’d rebuilt for the elderly Gordon twins was still being driven in vintage car parades by the one surviving sister. A ’93 Saturn, once inhabited by a family of raccoons in a derelict barn, now carried Colin Hardy and his classmates to and from the college south of town. Arvo had worked for a month and a half on the 1982 Camaro he’d found overturned in a gravel pit behind Connor Lake, determined to get it ready for Tom Grove’s high school graduation. He’d been rewarded with a kiss from the girlfriend and an invitation to attend the ceremony — though once he’d dressed in his suit and tie he’d decided the invitation had been only a courtesy, not meant to be taken seriously.

From wrecks that defied his efforts to revive them, he salvaged the reusable parts and hauled the carcasses onto the field behind his house. Since Portuguese Creek was eleven kilometres north of town, there were no officials to object to his sprawling graveyard of auto parts.

Nor was there a wife to object to this view from the kitchen window. He had survived a few close-calls that might have surprised his friends if they’d known. It had been mostly married women who’d found this loose-limbed lanky bachelor intriguing. But he’d seen how these women frowned at the crescents of grease beneath his fingernails and knew they were plotting to clean him up and suggest a different sort of activity to fill his days. When he’d dropped hints of a broken heart that had never completely mended, they’d decided not to waste their time on a man who would rather restore life to old cars than reawaken passion in an ageing woman’s heart.

At any rate, he suspected that any woman who saw the inside of his house would be alarmed to see how perfect he’d been keeping it. He might labour with engines and oily car parts in his workshop but he never failed to scrub down in his backyard sauna before returning to the house he kept as spotless as his mother had kept it before him. You could see yourself reflected in her linoleum floors; you saw no unwashed dishes in her kitchen sink nor wrinkle in the satin cover on his bed. Her crocheted doilies remained stiff with starch and perfectly white beneath the family photos on her polished tables. A day in the grease pit did not prevent him from keeping the place just as Silvi Saarikoski had famously kept it before him.

Few had forgotten the heavy middle-aged woman from Thunder Bay who had stepped down off a bus claiming in the Store to be his “intended.” This was almost twenty years ago. No one but Arvo had known she’d arrived as the result of a letter he’d written — unwisely, it turned out. She had not been intimidated by his meticulous housekeeping, nor was she bothered by his love affair with old cars, but within the month he’d found good reason to put both her and her teenaged son onto another bus.

Of course the next time Arvo put foot inside the Store, Matt
Foreman suggested that Thunder Bay was a long way to come for such a short visit.

“I would’ve liked it even shorter,” Arvo said. “Turned out she was mostly looking for someone to bail her light-fingered son out of jail every weekend.”

Foreman removed a few outdated notices from the cork-board above the coffee maker. “I thought I heard her yelling Finnish at you once.”

Arvo laughed. “Her
suomeski
wasn’t much better than mine but she knew more swear words than my Uncle Ahti. I heard just about every one of them while I was pushing her onto the bus. She cursed me even while I was paying for their tickets! Turned out the whole business cost me more than I knew — as I found out next time I went to my underwear drawer for some cash.”

“You could say she taught me a lesson.”

“Not to give up on women altogether?”

“To give up on any woman I met since I was twenty or thirty years old.”

He knew that so far as the local wives and widows were concerned, his unhappy experience with the woman from Thunder Bay had served him right. A long-armed, long-legged, long-backed scrawny man who preferred the company of four-wheeled wrecks to the companionship of an affectionate female had no business expecting anything from life but loneliness. If he was worth keeping an eye on at all, it was only because there was a slim possibility they might witness a reunion with his first and only sweetheart, the rumoured mystery girl whose name had not been spoken here but whose existence was never in doubt.