Read call of night: beyond the dark Online

call of night: beyond the dark 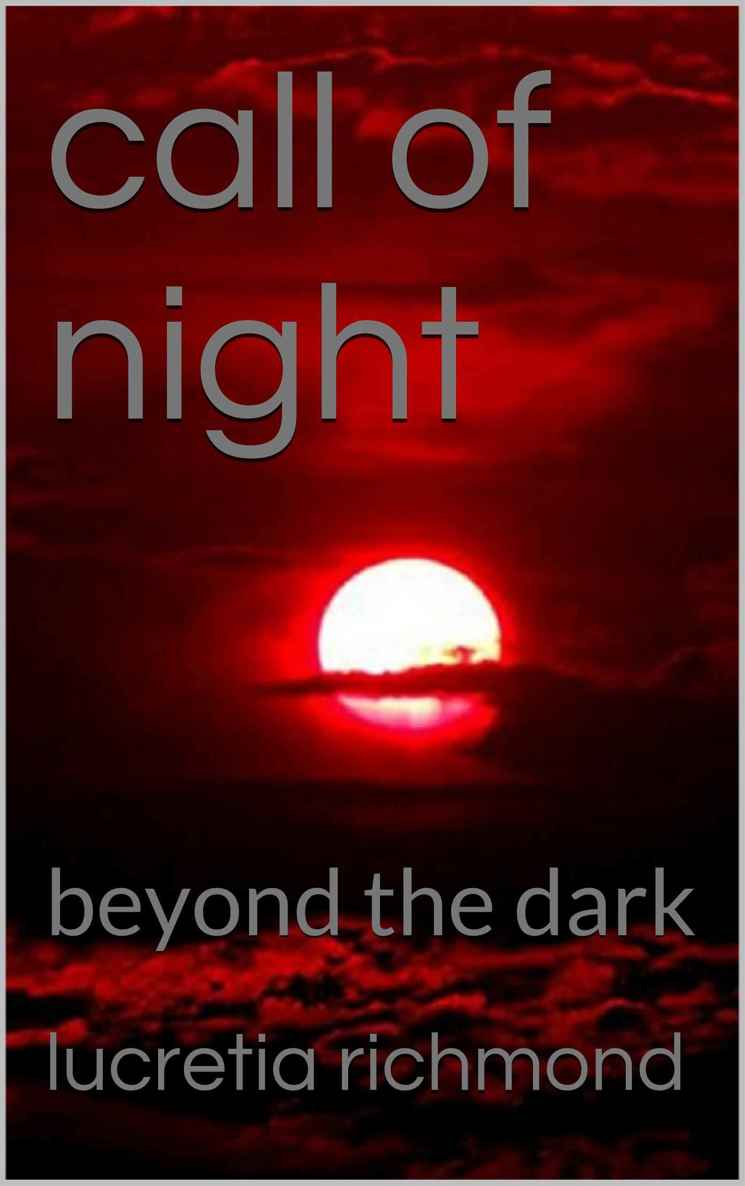 It beckons you. Katya Fallon questioned her sanity as the hunger crawled through her veins. She chose not to feed. She chose to ignore the monster inside of her. Micah wondered how she could have survived that long without the nourishment her body needed until he followed her to the velvet room; a party house for the undead. Katya could feel someone watching but couldn’t stop herself as the bouncer let her into the club. Usually, by now Katya learned to listen to the warnings she was given and how dangerous it could be if she hadn’t. The club was busy as it normally was, the music was mellow and Nico was bartender for the night. Almost every head turned when Katya walked in. But there was only one she was interested in. The fact she showed was no surprise to Nico, he knew she couldn’t stay away and knew how soon she would give in.

His desire for her was driven by the longing in her eyes.

He could feel the passion in her that consumed her every being; the passion she often tried to deny even existed, but couldn’t hide when they shared a kiss he would never forget.  Katya sat at her regular table as the waitress brought her drink, pretending not to notice Nico talking to the blonde with a pulse.

Still, Katya had to keep an eye on her; she was a human in the wrong place at the wrong time. There was a feeling that rose in              the air, she couldn’t explain it but it left her uneasy.

Micah knew he was following her for a reason. He approached her silently.

“I think you should come with me.” Micah whispered in her ear. Katya didn’t argue. They moved toward the front door of the club without Nico noticing. At a far distance, Micah and Katya stopped where they were.

“You’re not Katya.” He was sure of it even more as he spoke the words.

“You look so much like her.” Micah said with confusion, “Do you know what you just walked into?”

Not too stunned by his question, Lily replied, “A nest full of vampires?”

Bold, was the only thought he could come up with to describe her.

“My sister was seen in that night club before she disappeared, the vampire who turned her also turned me.” Lily continued.

“You’re determined to find her alone?” Micah shook his head knowing that would be impossible.

“The vampire you are looking for is Julius; he came into this town four years ago, no one can track him not even the best of hunters.”

The information she was just given intrigued her, “you know him well?” She asked curiously. He should know better than to trust a woman who has something up her sleeve.

“You can’t go after him alone.” Micah’s tone of voice changed. If she was anything like her sister Katya, she would have surely argued with him.

Lily had been searching for two months, since she had woken up in the morgue. Katya, no matter what the situation was would never leave her for dead. As children, they were always able to sense when the other was in pain or sad it grew stronger as they grew older. Lily couldn’t feel it now, it would have made it easier to find her if she still had any emotion at all.

Although, Katya knew Lily would never give up.

She was given a life she never wanted for her or Katya. She was focused on becoming a successful business woman, already on her last semester in college. She saw herself providing for their family. Their mother and father could no longer do it due to a car accident that left them both in a wheelchair. She didn’t know that in an instant her plans for the future could change.

Micah understood how she felt, he’s been around this earth for three hundred and forty years trying to forget the memories that haunted him, when he was mortal he knew happiness and he knew how to love. He wasn’t an enemy as he was now in the immortal world. He crossed a line when he tried to kill Julius’ brother, Xavier. If he hadn’t been interrupted, the vampires would not be facing extinction. Julius would not stand to reason with Micah.

Xavier was making his killings known to hunters. Julius wasn’t the least bit weary as he should have been. Xavier was charming when it came to women, he could draw them in with his deep dark penetrating eyes; they couldn’t see the deceit that hid behind them. Katya was different; Julius had to have her first. Lily would lead Micah straight to him.

Katya had a fire in her soul that was what attracted Julius to her. As he lay in the bed, he watched as she stood on the balcony staring at the glistening full moon; her night gown blowing softly in the breeze. Julius couldn’t help but wonder what she was thinking; her thoughts were closed to him; impossible to read. She wanted to believe she was safe even when he held her in his arms it wasn’t enough to reassure her. She missed feeling the morning light upon her face and seeing skies so blue. She wondered about her family, her father in particular. Their mother left when they were children. She knew his anger would get the best of him.

Katya felt the touch of Julius’ hand upon her shoulder.

Those words did not surprise her; it was never enough for him.

A knock on the door would disrupt their entire night. Xavier stood before his brother not sure how to say what Julius would not want to hear.

“The club, someone set fire to it.”

When they arrived to the velvet room there was nothing but ashes. Katya could feel Lily’s presence lingering in the darkness; Julius was too distracted to sense it as well. It was the second club he’d built that had been destroyed; those who were inside never made it out.

Julius knew there would be a price to returning to Thornton Lake, he also knew it could be death.

“We should go; there is nothing we can do here.” Katya’s voice often calmed him, although he couldn’t deny the rage which filled his head.

At the mansion, Julius stayed in his study for hours. Katya took that time to seek out her sister.

The lake was always her favorite no matter what hour it was especially as a child. Their parents owned a small cabin and when they would argue, the lake would be Lily’s escape.

“Surprised to see me?” Lily asked not knowing what else to say, the expression on Katya’s face gave her the answer she needed.

“Why would you come back here?” Katya asked curiously, “with all the memories?”

Lily’s strawberry blonde hair reminded her so much of their mothers, she couldn’t help but wonder why she hadn’t been blessed with such beauty before her immortality.

“Because, Katya memories are all I have now; you’re boyfriend took away the only life I had.” Lily didn’t like confrontation especially with family; she was always known as the quiet one. It was funny to her how things had become very different.

“You blame me for this?” Katya stunned by Lily’s reaction.

“You invited him into our house that first night, making father and I vulnerable.” The last thing Lily felt was pity for her dear sister.

“How was I to know he was a vampire?” Julius’ voice rang in her head now, he was curious as to where she had gone.

“I think you know more than you’re telling.”

And quickly as soon as Lily finished that sentence, thick fog rolled through and Katya vanished into the night.

Micah waited for Lily back at his motel room. The desert sun motel was on the outskirts of Thornton Lake, he never planned on staying. She came in as soon as the rain started to fall. The look on her face told him things didn’t go well.

“Do I need to ask?” Micah closed and locked the door behind her as she stood in the center of the room.

“What do you think?” Lily replied.

“We need to leave this place, it isn’t safe.” Micah suggested, “When Julius senses our presence and it won’t take him long, it won’t be pretty.”

It wasn’t enough for Lily to change her mind.

She was on a mission, a dangerous one and would not be satisfied until it was completed.

“My mother left my father, my aunt drove her back to their childhood hometown because she couldn’t stand the sight of him anymore; leaving her daughters behind with a drunk. I am different I never give up.” Lily didn’t have to say those words for Micah to believe it.

“What about your sister? How are you going to stop her?” Micah asked.

“I’ll do what I have to do, what I know has to be done.” Lily didn’t feel much when she spoke those words. Micah had seen that look Lily had in her eyes before, the look when any human mortality that once existed, even just a small amount no longer remains. Lily felt betrayed by the one person she thought she could trust most in the world. Micah knew she was willing to risk it all.

“We do nothing; we go on as we have been.” Julius knew if another club was built it also would be destroyed. They were trying to draw him in.

Katya walked through the front door of the mansion, Julius came down the staircase knowing there was no one around him he could trust.

The New Order by Sean Fay Wolfe
Mother Knew Best by Dorothy Scannell
Chameleon On a Kaleidoscope (The Oxygen Thief Diaries) by Anonymous
A Fatal Inversion by Ruth Rendell
Gambling with Gabriella (Menage MfM Romance Novel) (Playing For Love Book 2) by Tara Crescent
An End to a Silence: A mystery novel (The Montana Trilogy Book 1) by W.H. Clark
Shopping for a Billionaire 1 by Julia Kent
The C Word (Just a Word Book 1) by Kerry Heavens
The Body in the Clouds by Ashley Hay
Shadow Of The Mountain by D.A. Stone