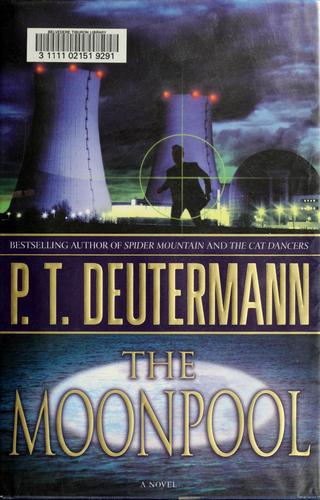 At the start of Deutermann's exciting third suspense novel to feature Cameron Richter, a retired cop who runs Hide and Seek Investigations, a PI firm staffed by other ex-cops (after
Spider Mountain
), one of Cam's operatives, Allie Gardner, falls ill in Wilmington, N.C., while doing some philandering-husband divorce work. Soon she's dead on the floor of a gas station bathroom, burned from the inside out from having ingested a pint of highly radioactive water. When Cam looks into Allie's death, he winds up being hired by Aristotle Quartermain, chief of security at Helios, the local nuclear power station. Aiding Cam are the book's two most appealing characters, his German shepherds, Frick and Frack. Deutermann imparts much interesting scientific information on such things as the titular moonpool, where exhausted nuclear fuel is stored. Just as interesting, and far more chilling, is the author's depiction of how the Department of Homeland Security operates and why you never, ever want to get on their bad side. Thriller fans will look forward to further entries in this fine series. (_May)_
Copyright © Reed Business Information, a division of Reed Elsevier Inc. All rights reserved.

With Spider Mountain (2007), Deutermann turned from Clancy-like military thrillers to a series starring North Carolina freelance investigator Cam Richter. This time a seemingly simple case turns ominous when one of Richter’s team dies of radiation poisoning, and the source appears to be the nearby Helios nuclear power plant. Even the power of the FBI and CIA can’t stop Richter from trying to discover the truth. Digging deeper, he uncovers a terrorist plot to release the water from the plant’s “moonpool,” the radioactive storage pond that cools the spent reactor fuel, thus creating a disaster similar to Chernobyl. Can Richter find the murderer and stop the catastrophe? The inner workings of a nuclear power plant are revealed in elaborate detail here, slowing down the pace dramatically, at the expense of both the characters and the story. Still, fans of the first Richter novel will want to stick with the series a little longer before pulling up stakes. --Jeff Ayers

“One of the crime genre’s more original and memorable creations…a welcome change from the usual sort of thriller villain.”

“Full of surprises…keeps you reading past your bedtime.”

“A spellbinding novel of suspense…quite possibly his best.”

“Addictively enthralling…(wait till you get to the jaw-dropping ending!).”

“You think you have read this before. Trust me. You haven’t. And you should…a great read.”

“One of the lasting conventions in thriller writing involves putting the hero in a situation where the reader is forced to ask, ‘How can he possibly get out of that?’…Deutermann…exploits that convention to the hilt in
Hunting Season
.”

“Deutermann’s previous novel,
Train Man
, was a marvelous, bang-up action novel…in
Hunting Season
he equals the thrills…Deutermann writes with authority and inventiveness. Add in top-secret gizmos, heroes meaner than villains…and you’ve got one of the best by one of the best at what he does.”

“The tale is loaded with political and bureaucratic skullduggery, and there are plenty of well-banked curves and clever twists. A solid read from an author whose own tradecraft is every bit as good as that of his characters.”

“Deutermann has sold three novels to Hollywood already. They’re blind if they pass on this one.”

“Deutermann…writes page-turners. And this one has a surprise ending—one that comes as a bombshell.”

“A dead-on sense of place and appealing characters in tight corners…satisfying.”

“Deutermann has now published seven pounding-pulsers. For this book, he was back at Dahlgren and Mahan, updating his reef points.”

“Deutermann delivers his most accomplished thriller yet. Intelligent, expertly detailed, and highly suspenseful.”

“Another solid performance from Deutermann, this time about a train-hating, vengeance-hungry madman and the FBI agents seeking to derail him. Quality entertainment: the details convince, the people are real, the plot twists legitimate.”

The Edge of Honor

Scorpion in the Sea