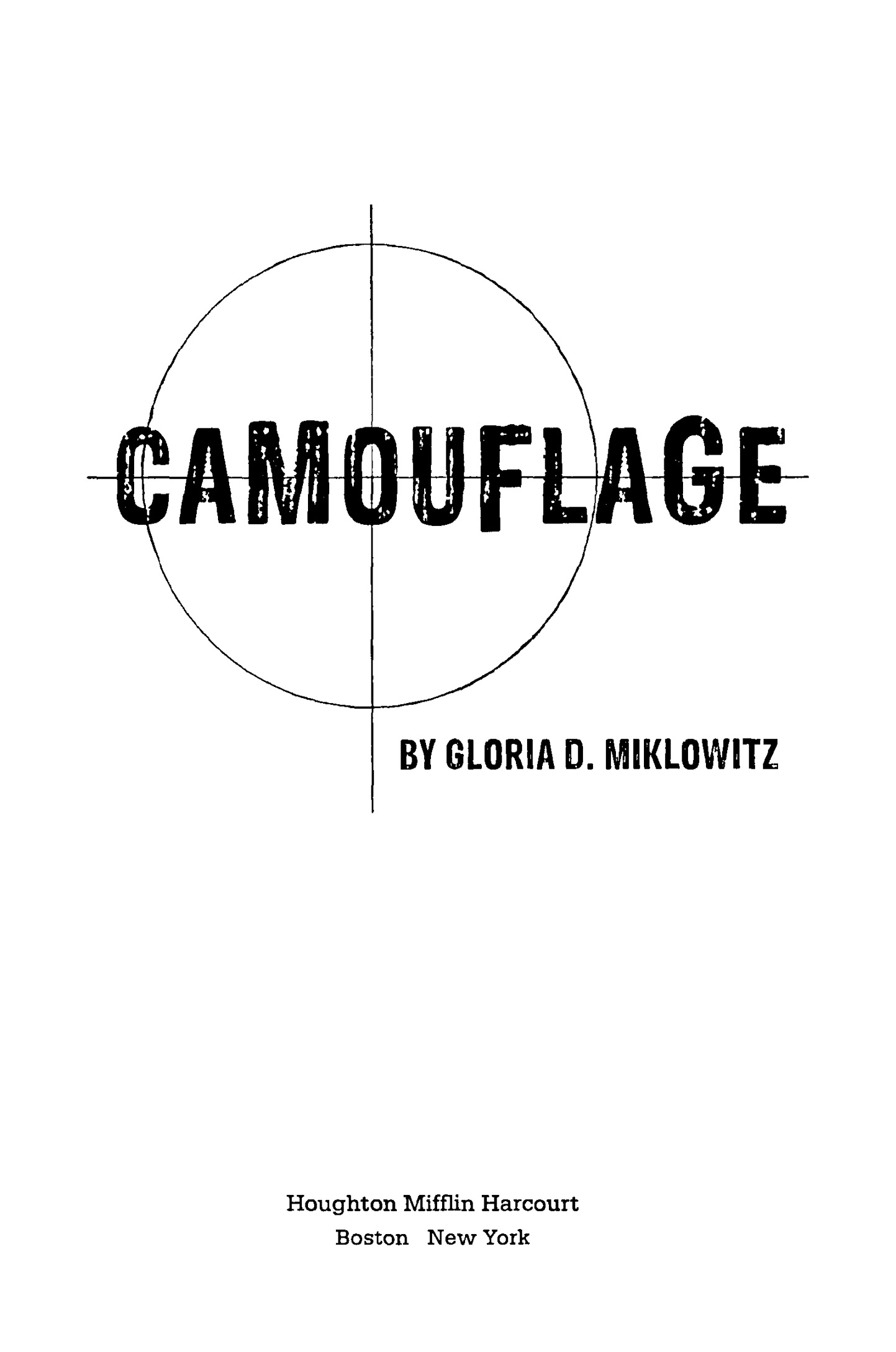 All rights reserved. Originally published in hardcover in the United States by Harcourt Children's Books, an imprint of Houghton Mifflin Harcourt Publishing Company, 1998.

Summary: While visiting his father for the summer, fourteen-year-old Kyle finds himself gradually becoming enmeshed in a militia's plot to wage war on the federal government.

I'd like to thank the following for their support and input during the writing of this book: Sonia Levitin for brainstorming with me; Dr. Joseph Campbell for his input on weapons; Gail Kimberly Francis for her knowledge of Michigan life; and my Thursday night writing colleaguesâEve Bunting, Tony Johnston, Lael Littke, Susan Rubin, and Martha Tolles. Also, I'm indebted to and admiring of Diane D'Andrade for her friendship, encouragement, and careful editing of
Camouflage.

The author apologizes for Hiram's racist remarks, which are meant to show his racist attitudes. I hope readers recognize how repellent those remarks are by Kyle's reactions to them.

For Paul and David,
Marija, Sabina, and Arianaâ

“N
o! No, NO,
NO
!” his mother said. She stood at the sink scraping carrots and shook her head with each refusal. “I don't want to hear another word about it, Kyle! Now finish setting the table. Brian will be here in a minute.”

Kyle wrenched the silverware drawer open, earning a disapproving glare. He yanked three knives, three forks, and three spoons from their places, slammed the drawer shut, and stalked into the dining room. Girls' work; that's what she had him doing. Setting a table to impress Big-Shot Brian, the cop. He didn't care how often she said no. He was not going to spend eight weeks in summer school, locked in stuffy classrooms, when every kid he knew was outdoors having fun! He was fourteen, for god's sake! He hadn't gotten below a C in any class. Shouldn't he have some say over his own life?

He went back to the kitchen to get the fancy dinner plates. Maybe he should have waited until after dinner to ask. She was tired from working all week and hungry. Later she'd be in a more reasonable mood. But later, Brian would be around. She would be so wrapped up in pleasing the guy that Kyle might just as well be invisible, for all she'd notice.

Kyle set the plates on a tray and took out three glasses. “I wouldn't get in trouble.” He tried again, keeping his voice calm. “I'd be going to the beach mostly. There'll be swim parties! And some of the guys are planning a camping trip! And .Â .Â . and .Â .Â .” He searched desperately for some argument that might impress her. “I'd go to the library, too. It's not like I'd just turn off my brain! Mom,
please
!”

“No!” She glanced up. “Get the door. That must be Brian.” His mother ran a hand through her short blond hair and slipped into her heels.

Kyle slouched to the door, seething. She didn't care about
his
feelings anymore, not since she'd met Brian three years ago. And now they were even talking about moving in together. Damned if he was going to hang around all summer with his nose in a book while Brian made eyes at his mom!

Brian and his mother had met when he'd stopped her for speeding. She'd been flustered and upset but he'd been so “sweet,” she'd said, that she'd almost thanked him when he wrote the ticket.

“Hi, Kyle. How's it going?” Brian asked, standing there all starched and formal, a bouquet of flowers in hand. He must have come straight from work because he still wore his uniform. Or maybe he wore it because he thought it made him look important.

A blast of traffic noise from National Boulevard followed him into the room. Kyle stood aside so Brian could pass. He wasn't about to tell Big-Shot Cop how
anything
was going. Who did Brian think he wasâhis father?

“Hear you're going to summer school,” Brian said, looking back as Kyle shut the door. “Good plan. It'll give some structure to your days. That's what I did just before high school and there was plenty of time for fun, too. Angie?”

Kyle followed Brian into the living room, making a face at his back. Brian always sided with Mom. He always talked about kids running wild when they had too much time on their hands. Mr. Rules-and-Regulations. There'd be no help from him.

Kyle bet his father wouldn't be so mean. Ed Klinger was real laid-back. Whenever Dad visited, usually once a year since the divorce, they always had fun together. And he always took Kyle's side against Mom. On his last visit he'd told Kyle about this neat gun club he'd started up in Michigan, where he lived. He said if Kyle ever wanted to visit he'd teach him how to shoot. If Mom had known, she'd have blown her top.

Suddenly Kyle knew how to get his way. He grinned at the thought. Mom would give in to anything rather than have him do this. He'd tell her not to worry. He wouldn't argue about hanging out all summer anymore. But he wouldn't go to school, either. Instead, he'd go to Michigan, spend the summer with Dad! That's what he'd do. He was old enough. Wasn't it time he got to know the other half of his genes?

The more he thought about it, the better the idea seemed. One way or the other he'd win. If she wouldn't let him go to Dad, she'd have to let him take time off from school. Brilliant!

“You want to spend the summer with your father?” His mother's voice rose. They were seated at the dinner table, just ready for dessert, when he broached the subject.

“No.” His mother's face turned red.

“But why? Why? You can't just say no without a reason!” Kyle's voice broke. It hadn't gone the way he'd planned at all.

“We'll talk about it later.” She turned to Brian. “I've got a wonderful tiramisu for dessert. Kyle, would you bring it in, please; it's in the fridge. And bring the coffee, too, honey.”

Kyle pushed back his chair so it scraped noisily on his mom's precious wood floor. He stumbled across the room and into the kitchen, slamming the door behind him.
Damn, damn, damn
, he cussed silently. He went to the fridge and took out the dessert plates. Maybe he should just run away. Run off to Dad without her permission. He'd saved enough for a ticket. He slapped the plates on a tray and headed for the door.

“Why not, Angie?” Brian's voice came to him from the other room, subdued, almost in a whisper. “It's not a bad idea, actually. And we could have the summer alone together.”

Kyle stiffened. He hated when his mother talked mean about his dad, especially in front of Mr. Big-Shot Cop. He wanted to march right in and tell her so. Instead, he waited at the door, listening.

“Don't turn Kyle down just because of old wounds, Angie.”

“Old wounds? You don't know the half of it!”

Kyle bit his lip, hoping his mother wouldn't go onâabout how his father always thought he was smarter than the boss. Couldn't hold a job. Ran off to a rinky-dink town and left her with a six-year-old.Â .Â .Â .

“We've done all right,” he said, storming into the room. He set the tray on the table and glared at his mother. “Dad was pretty smart, seems to me, to get out of L.A. What's here? You're always saying how awful it is. Helicopters buzzing around all night. Gang fights. Murders. Earthquakes! I don't hear about Michigan having problems like that!”

“That's enough, Kyle!” His mother glared at him. Then, in a gentler voice she added, “I know it's natural to want to be with your father at your age, but I'd hoped .Â .Â .” She stopped and looked toward Brian. “It's not just Ed. I just don't want my baby so far away.”

Baby!
Kyle's face burned. Brian rolled his eyes at him and grinned.

“It's true what Kyle says about safety, Angie,” Brian offered. “They probably don't even lock their doors at night in that ârinky-dink town.' All he'll find to do is fish. He'll probably get so bored he'll beg to come home in a week.”

Kyle gripped the back of his chair and leaned forward. His mother was frowning, looking at her fingers, considering. There was hope. “See? Even Brian thinks it's a good idea! Say yes, Mom.
Please
.Â .Â .”

S
AYING GOOD-BYE
took forever. Kyle's mother kept asking if he'd remembered to pack the rain poncho, his bathing suit, enough underwear, extra sweatersâShe even supplied him with stamped, addressed envelopes so he'd write each week. When it came time to partâBrian would drive him to the airportâshe hugged him so hard he squirmed to get free.

“Don't stay one day longer than you said,” she exclaimed. “And if you don't like it there, get on a plane and come back.”

“Ah, Mom, quit worrying! I'll be fine!” Kyle grabbed his duffel and hurried down the walk to Brian's car.

“Angie! He's made his decision,” Brian said. “Kyle's no quitter. If he doesn't like it when he gets there, he'll make the best of it. Right, Kyle?”

“Right,” Kyle said. “Mom, go already. You'll be late for work.” While he stowed his duffel and backpack in the car trunk, his suspicion recurred: Maybe what Brian
really
wanted was for him to be out of the way so
he
could move in. And now he'd fixed it so that Kyle couldn't come back early, even if he wanted to, or he'd be called a quitter. Not that he had any thought of coming back even a day early. How could it be anything but great, living with his dad?

Kyle only half tuned in to Brian's chatter as they drove to the airport. “Guy in that Chevy's drunk. See how he weaves in and out of traffic? Notice that guy on the corner? Dealing dope, I'd bet.” He whistled tunelessly when Kyle didn't answer.

“My mother can sure be a pain in the butt,” Kyle said when they were almost to the airport. He'd been thinking of how she'd called him her “baby.” He imitated his mother's voice. “âPhone as soon as you get there. Write once a week.'”

Kyle bristled. It was okay for
him
to criticize his mother, but not for her boyfriend to. After a while he asked, “Do mothers ever let up?”

“Never. That's what they're for. They worry about you when you're sixty, married, with grandkids!”

“But she doesn't have to worry now! Dad will keep an eye on me.”

“Sure, right,” Brian said without much conviction. He maneuvered into the traffic near the terminal and found a place to park. “Well, this is it.” He killed the engine, jumped out of the car, and headed for the back to open the trunk.

Kyle pushed in front of Brian and pulled out his backpack before he could touch it. Kyle slipped into its straps and reached for the duffel.

“Want me to come in with you?”

One Wild Cowboy by Cathy Gillen Thacker
Curiosity Didn't Kill the Cat by M. K. Wren
A Question of Honor by McKenna, Lindsay
The Way Home by Katherine Spencer
The Missing by Beverly Lewis
The Brush of Black Wings by Grace Draven
Where She Has Gone by Nino Ricci
Torch by KD Jones
Kaddish for an Unborn Child by Imre Kertész
Land of a Thousand Dreams by BJ Hoff