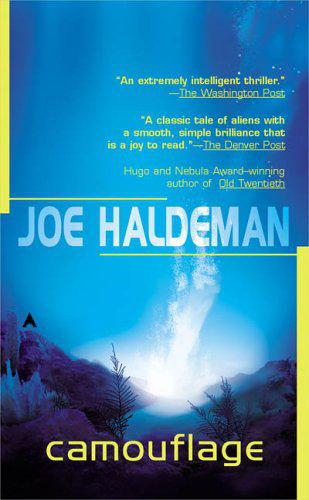 Published by The Berkley Publishing Group

This is a work of fiction. Names, characters, places, and incidents either are

the product of the authors imagination or are used fictitiously, and any

events, or locales is entirely coincidental.

The scanning, uploading, and distribution of this book via the Internet or via any

law. Please purchase only authorized electronic editions, and do not participate

in or encourage electronic piracy of copyrighted materials. Your support of

the author's rights is appreciated. ACE and the "A" design are

This title has been registered with the Library of Congress.

The author gratefully acknowledges the help of Chris Nelson, our guide through the alien world of Samoa, and Cordelia Willis, for her knowledge of forensic technology and DNA matters.

The monster came from a swarm of stars that humans call Messier 22, a globular cluster ten thousand light-years distant. A million stars with ten million planets—all but one of them devoid of significant life.

It's not a part of space where life could flourish. All of those planets are in unstable orbits, the stars swinging so close to one another that they steal planets, or pass them around, or eat them.

This makes for ferocious geological and climatic changes; most of the planets are sterile billiard balls or massive Jovian gasbags. But on the one world where life has managed a toehold, that life is
tough.

And adaptable. What kind of organisms can live on a world as hot as Mercury, which then is suddenly as distant from its sun as Pluto within the course of a few years?

Most of that life survives by simplicity—lying dormant until the proper conditions return. The dominant form of life, though, thrives on change. It's a creature that can force its own evolution—not by natural selection, but by unnatural mutation, changing itself as conditions vary. It becomes whatever it needs to be—and after millions of swifter and swifter changes, it becomes something that can never die.

The price of eternal life had been a life with no meaning beyond simple existence. With its planet swinging wildly through the cluster, the creatures' days were spent crawling through deserts gnawing on rocks, scrabbling across ice, or diving into muck—in search of any food that couldn't get away.

The world spun this way and that, until random forces finally tossed it to the edge of the cluster, away from the constant glare of a million suns—into a stable orbit: a world that was only half day and half night; a world where clement seas welcomed diversity. Dozens of species became millions, and animals crawled up from the warm sea onto land grown green, buzzing with life.

The immortal creatures relaxed, life suddenly easy. They looked up at night, and saw stars.

They developed curiosity, then philosophy, and then science. During the day, they would squint into a sky with a thousand sparks of sun. In the night's dark, across an ocean of space, the cool billowing oval of our Milky Way Galaxy beckoned.

Some of them built vessels, and hurled themselves into the night. It would be a voyage of a million years, but they'd lived longer than that, and had patience.

A million years before man is born and its story begins, one such vessel splashes into the Pacific Ocean. It goes deep, following an instinct to hide. The creature that it carried to Earth emerges, assesses the situation, and becomes something appropriate for survival.

For a long time it lives on the dark bottom, under miles of water, large and invincible, studying its situation. Eventually, it abandons its anaerobic hugeness and takes the form of a great white shark, the top of the food chain, and goes exploring, while most of its essence stays safe inside the vessel.

It encounters humanity and notes their acquired superiority—their placement, however temporary, at the top of every food chain. It becomes a killer whale, and then a porpoise, and then a swimmer, and wades ashore naked and ignorant.

But eager to learn.

Russell Sutton had done his stint with the U.S. government around the turn of the century, a frustrating middle-management job in two Mars exploration programs. When the second one crashed, he had said good-bye to Uncle Sam and space in general, returning to his first love, marine biology.

He was still a manager and still an engineer, heading up the small firm Poseidon Projects. He had twelve employees, half of them Ph.D.s. They only worked on two or three projects at a time, esoteric engineering problems in marine resource management and exploration. They had a reputation for being wizards, and for keeping both promises and secrets. They could turn down most contracts—anything not sufficiently interesting; anything from the government.

So Russ was not excited when the door to his office eased open and the man who rapped his knuckles on the jamb was wearing an admiral's uniform. His first thought was that they really could afford a receptionist; his second was how to frame a refusal so that the guy would just leave, and not take up any more of his morning.

That was interesting. "I read your book in graduate school. Didn't know you were in the military." The man's face was vaguely familiar from his memory of the picture on the back of
Bathyspheric Measurements and Computation;
no beard now, and a little less hair. He still looked like Don Quixote on a diet.

"Have a seat." Russ waved at the only chair not supporting stacks of paper and books. "But let me tell you right off that we don't do government work."

"I know that." He eased himself into the chair and set his hat on the floor. "That's one reason I'm here." He unzipped a blue portfolio and took out a sealed plastic folder. He turned it sideways and pressed his thumb to the corner; it read his print and popped open. He tossed it onto Russell's desk.

The first page had no title but top secret—for your eyes only, in red block letters.

"It's not really classified, not yet. No one in the government, outside of my small research group, even knows it exists."

"But you're here as a representative of the government, no? I assume you do own some clothes without stars on the shoulders."

Russ hesitated, then opened the folder. The first page was a picture of a vague cigar shape looming out of a rectangle of gray smears.

"That's the discovery picture. We were doing a positron radar map of the Tonga-Kermadec Trench—"

"That part
is
classified. And irrelevant."

Russ had the Tooling that his life was on a cusp, and he didn't like it. Ho spun around slowly in his chair, taking in the comfortable clutter, the pictures and the charts on the wall. The picture window looking down on the Sea of Cortez, currently calm.

With his back to Halliburton, he said, "I don't suppose this is something we could do from here."

"I tend to think pretty girls and no winter." He pushed his glasses back on his nose. "Food's not bad if you don't mind American."

Russ turned back around and studied the picture. "You have to tell me something about why you were there. Did the Navy lose something?"

"Did it have people in it?"

"You just did." He turned to the second page. It was a sharper view of the object. "This isn't from positrons."

"Well, it is. But it's a composite from various angles, noise removed."

Good job,
he thought. "How far down is this thing?"

"The trench is seven miles deep there. The artifact is under another forty feet of sand."

He nodded. "A quarter of a million years ago."

Russ stared at him for a long moment. "Didn't I read about this in an old Stephen King novel?"

"Look at the next page."

It was a regular color photograph. The object lay at the bottom of a deep hole. Russ thought about the size of that digging job; the expense of it. "The Navy doesn't know about this?"

"No. We did use their equipment, of course."

"You found the thing they lost?"

"We will next week." He stared out the window. "I'll have to trust you."

He nodded slowly and chose his words. "The submarine that was lost is in the trench, too. Not thirty miles from this ... object."

"You didn't report it. Because?"

"I've been in the Navy for almost twenty years. Twenty years next month. I was going to retire anyhow."

"I never was 'illusioned.' Twenty years ago, I wanted to leave academia, and the Navy made me an interesting offer. It has been a fascinating second career. But it hasn't led me to trust the military, or the government.

"Over the past decade I've assembled a crew of like-minded men and women. I was going to take some of them with me when I retired— to set up an outfit like yours, frankly."

Russ went to the coffee machine and refreshed his cup. He offered one to Halliburton, who declined.

"I think I see what you're getting at."

"You want to retire with your group and set up shop. But if you suddenly 'discover' this thing, the government might notice the coincidence."

"That's a good approximation. Take a look at the next page."

It was a close-up of the thing. Its curved surface mirrored perfectly the probe that was taking its picture.

"We tried to get a sample of the metal for analysis. It broke every drill bit we tried on it."

"It's harder than diamond. And massive. We can't estimate its density, because we haven't been able to budge it, let alone lift it."

"If it were an atomic submarine, we could have hauled it up. It's not even a tenth that size.

"If it were made of lead, we could have raised it. If it were solid uranium. It's denser than that."

"We could bring it up with some version of your flotation techniques. And keep all the profit, which may be considerable. But there would be hell to pay when the Navy connection was made."

"Simple." He took a chart out of his portfolio and rolled it out on Russ's desk. It snapped flat. "You're going to be doing a job in Samoa...."

Before it came out of the water, it formed clothes on the outside of its body. It had observed more sailors than fishermen, so that was what it chose. It waded out of the surf wearing white utilities, not dripping wet because they were not cloth. They had a sheen like the skin of a porpoise. Its internal organs were more porpoise than human.

It was sundown, almost dark. The beach was deserted except for one man, who came running up to the changeling.

The changeling looked at him. The man was almost two heads taller than it, with prominent musculature, wearing a black bathing suit.

"Cat got your tongue, little guy?"

Mammals can be killed easily with a blow to the brain. The changeling grabbed his wrist and pulled him down and smashed his skull with one blow.

When the body stopped twitching, the changeling pinched open the thorax and studied the disposition of organs and muscles. It reconfigured itself to match, a slow and painful process. It needed to gain about 30 percent body mass, so it removed both arms, after studying them, and held them to its body until they were absorbed. It added a few handfuls of cooling entrails.