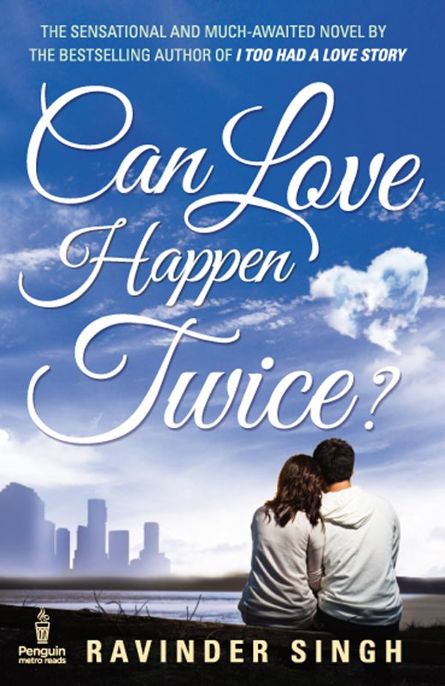 Before You Read Further …

Ravinder Singh is a bestselling author. His debut novel
I Too Had a Love Story
has touched millions of hearts.
Can Love Happen Twice?
is his second book. After spending most of his life in Burla, Orissa, Ravinder has finally settled down in Chandigarh. Having worked as a computer engineer for several years at some of India’s prominent IT companies, Ravinder is now pursuing his MBA at the world-renowned Indian School of Business, Hyderabad. Ravinder loves playing snooker in his free time. He is crazy about Punjabi music and loves dancing to its beat. The best way to contact Ravinder is through his official fan page on Facebook. You can also write to him at
[email protected]
or visit his website
www.RavinderSinghOnline.com
.

To my readers who love me, believe in me and encourage me to write more.
This one is for you.

Before You Read Further …

Now that I have completed this book, which is only a short while away from coming out in print, it is important for me to tell you who I am and why I am writing this book.

I am an author by chance. A lot of good and bad things happen in life, just by chance. My first book
I Too Had a Love Story
was an outcome of the tragedy in my life and, honestly, was my reason to survive. Never before had I thought of becoming an author. But I am blessed to share that the book that I wrote as a tribute to my girlfriend has fetched immense love and respect from my readers.

The impact of the story on my readers was such that I received (and keep receiving) uncounted emails, scraps and messages from them. They share their respective love stories and I must say that they literally pour out their hearts while writing to me. Sadly for me, many of those writings have sad endings. They feel at peace after sharing their true stories with me. But having read those messages I realized that you don’t always need a wild truck racing madly on the road to kill a love story, the way it happened in my story. Most of the time I found that people themselves have killed their love stories. They call it ‘break up’.

The ever-increasing numbers of such emails made me comprehend that, these days, ‘Heartbreak’ is a far more rampant disease than ‘Heart Attack’. And, unfortunately, insurance covers just the latter. This is the very reason behind writing this book.

So is this book again my true story?

I believe that every fiction is inspired by a true story. Maybe this is my story, maybe not, maybe it is only partly my story, maybe not, maybe it is an amalgamation of several stories that my readers write to me, maybe not. I don’t want to reveal how much fact and how much fiction there is in my story. Rather, I want you to discover it with your own imagination. But I will leave you with this one truth, and believe me when I say this: it is our generation’s true story. This is the prime reason I have dedicated this book to my readers. As you read this story I want you to put yourself in the shoes of Ravin and enjoy reading your own story.

What can you say about a guy who lost his girlfriend by the time the two of them were to exchange their engagement rings?

That he plunged into the deepest ocean of trauma? That, for whatever happened, he lost his faith in God? That he was so madly immersed in the love of his mortal girlfriend that, after she was gone, forever, he wrote an immortal love story in her memory?

Or maybe that, after a long interval of time, one day, love knocked at his door once again?

Dusk had fallen when Amardeep walked out of the exit gate of the busy Chandigarh airport. A chilly winter welcomed him for the very first time to ‘The City Beautiful’. The evening was even more beautiful for it was Valentine’s Day. Love was in the air and red was the colour everywhere. The temperature must have been close to 4 degrees. Adding to the winter chill was the cool breeze which was blowing that evening, compelling the just-arrived passengers to pull out their jackets.

Enjoying the initial few moments, Amardeep let his body feel and embrace the cold surrounding him, but he could not bear it for long. Soon he pulled out his jacket and zipped it up till his neck. The foggy breath that he exhaled was visible. It was that cold.

At the exit door, the constant announcements, the honking taxis, the crazy relatives and the masses of passengers all made the place chaotically noisy. A few taxi drivers had besieged Amardeep, offering him a paid ride. Amid the hustle-bustle of getting a passenger one of the drivers almost lifted his bag and asked,

Amardeep quickly retaliated by snatching his luggage back from him. With this gesture he signalled his disagreement to take a cab.

He then made his way out of the gathering. In one hand he had his favourite
Economic Times
and a half-filled water bottle while in the other he held the handle of his wheeled bag which he rolled in tandem with his walk. He walked up till the parking lot where there was not much of a crowd. The place was calm. Underneath a row of tall lamp posts, there stood scores of cars. Amardeep perched his back against the bonnet of the first car in the series. By then the exposed parts of his body had turned cold. He placed the newspaper on the bonnet and put the water bottle over it to prevent it from flying off with the wind. Looking here and there in search of someone, he rubbed his cold palms against each other and breathed out a puff of warm air to warm them up.

Seconds later, he pulled out his cellphone from the pocket of his jeans and switched it on to make a call.

‘Yes, I am at the parking lot,’ he said and kept describing the whereabouts of the place he was at, until a black Santro stopped right in front of him.

‘Raam j-i-i-i-i-i-i!’ shouted someone as the door of the car opened.

It was the nickname with which Amardeep had been baptized during his college days, and it still hadn’t left him.

His friends Happy and Manpreet had come out of the car to embrace Amardeep. A round of warm greetings and smiles occupied the next few minutes. It was nostalgic for them to meet each other after so long. The last time they had been together was during their first reunion which had happened almost five years back. Maybe that’s why they couldn’t help themselves from celebrating this moment with a long, melodramatic hug. It might have been bizarre for others to watch the three guys hugging each other on a Valentine’s Day evening!

The headline on the fluttering
Economic Times
under the half-filled bottle over the bonnet of the car behind them read, ‘Supreme Court finally does away with Section 377; Homosexuality now legal in India.’

Moments later, while Happy dumped Amardeep’s luggage in the rear of the car, Amardeep took the back seat and relaxed. Happy started the vehicle and Manpreet turned off the music system to enable further conversation. They talked to each other for a while as Happy drove the car out of the airport towards the city.

After a drive of some fifteen kilometres, Happy stopped the car in front of a local Internet cafe.

‘Nothing much—just a quick email!’ Happy answered undoing his seat belt. ‘Give me ten minutes and I will be back.’

Amardeep tried to understand the criticality but then stepped back from asking any question. He knew Happy’s strange nature of giving preference to little things.

In Happy’s absence, Manpreet and Amardeep chatted for a while.

‘That was fast,’ Amardeep acknowledged.

‘I told you it’s going to be quick.’ Happy chuckled. Without revealing much detail, he started the engine again.

Some time passed and gradually they became silent. Happy kept driving. Each of them had the same thought running in his mind. But Happy was first to speak.

No one said anything for a few moments.

Then Amardeep put his hand on Happy’s shoulder.

‘We all are missing him. And this reunion is for Ravin,’ said Amardeep.

A ray of hope passed across their faces, giving way to a euphoric smile in addition to a steely resolve that they would help their friend.

Happy pressed the accelerator, signalling that he was doing well. Manpreet increased the volume of the music system in the car.

A little later Happy shouted against the volume of the song being played, encouraging everyone’s mood.

‘Has anyone of us been on a radio channel ever?’

‘No!’ came the responses in unison.

‘Has anyone ever seen what a radio station looks like from inside?’ Happy’s voice roared further.

‘Hahaha … No … no …’ followed the answers again in unison, this time accompanied with laughter.

Happy then pointed his finger towards the glove compartment beneath the dashboard of the car and asked Manpreet to open it and look for an envelope. Manpreet found it and picked it up. It was a nicely packed white envelope with the logo of a prominent radio station embossed on the top left corner: Superhits 93.5 RED FM … Bajaate Raho! Inside was an invitation letter which Manpreet opened with twinkling eyes. He lit the roof light of the car and began reading the letter out loud for everyone’s sake.

‘This Valentine’s Day evening Superhits 93.5 RED FM is delighted to host the talk show with the real-life characters of the bestselling and heart-touching true romantic tale of this decade—
I Too Had a Love Story
. We at Superhits 93.5 RED FM truly consider this love story to be the equivalent of a modern-day Taj Mahal, written by a lover in the memory of his beloved. On this Valentine’s Day we are proud to have on our show Ravin, who wrote and shared his love story with us, along with his good friends Happy, Amardeep and Manpreet who are again the real-life characters in the book as our guests. So tune into this Valentine’s Day’s special show
Raat Baaki
,
Baat Baaki
, only on Superhits 93.5 RED FM, the number-one FM station, at 9 p.m., to talk to Ravin and his friends, to listen to the unsaid stories behind the making of
I Too Had a Love Story
and to know what more happened in Ravin’s and his friends’ lives after this book got launched.’

At the same moment, somewhere in the silence of a barely visible, foggy night in Shimla, someone is sitting on the staircase in front of his room. There is a row of rooms and in front of those rooms is a huge lawn. He is wearing a heavy blanket to protect himself from the cold. He has long hair and a beard which he hasn’t shaved for months. It appears he is not doing well. He sits still and his gaze is fixed on something he is holding in his hands. There is no one around him. A dead silence persists and the only audible sound is the sound of the night. Just above his head there is a dimly lit yellow bulb under which hangs a board: ‘Rehabilitation Centre—Ward no. 4’.

Bones in Her Pocket: A Tempe Brennan E-Short by Kathy Reichs
Love Birds of Regent's Park by Ruth J. Hartman
(World of Valdira 01) The Way of the Clan by Dem Mikhaylov
Broken to Pieces by Avery Stark
Diary of a Mummy Misfit #1 by Amanda Egan
Idea in Stone by Hamish Macdonald
Reaver by Ione, Larissa
Reality TV Bites by Shane Bolks
Relinquished by K.A. Hunter
Skylark by Sara Cassidy