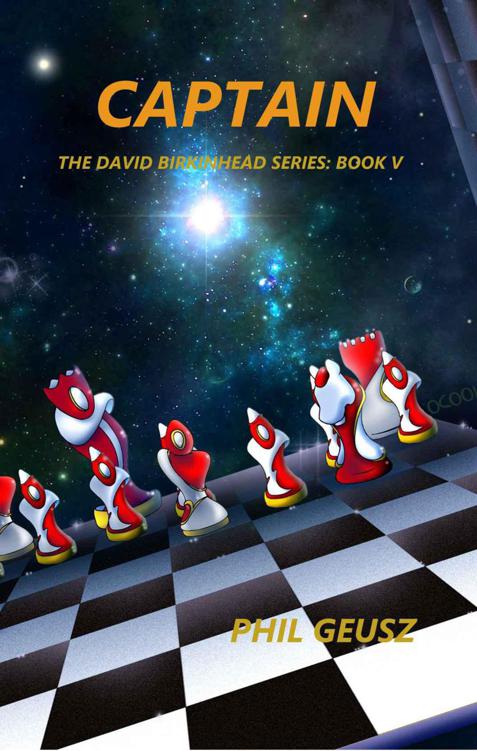 This is a work of fiction.  Names, characters, places, and events are the products of the author’s imagination or are used fictitiously and are not to be construed as real.  Any resemblance to actual events, locales, organizations, or persons, living or dead, is entirely coincidental.

All rights reserved.  No portion of this book may be used or reproduced in any manner whatsoever without explicit permission, except in the case of brief quotations embodied in critical articles or reviews.

“Apparently, humans are endowed by their creator with certain inalienable rights,” Nestor said as he lounged in his comfortable chair on the other side of the apartment, staring into his electronic reader. He was always reading, Nestor was, whenever not otherwise occupied. The act practically defined him. He smiled. “Their creator was a bit more generous than
ours
, eh?”

I looked up from my own reader and smiled back. “We haven’t done so badly,” I pointed out. “Neither of us.”

“True enough,” my closest Rabbit-friend agreed as he looked around our comfortable little apartment-cell. The government of New Geneva might’ve been required by treaty to intern us, but at no point had anyone ever shown any malice or hard feelings towards any of
Richard
’s crew from myself on down. While our doors were perforce kept locked and our communications monitored, to my knowledge our jailors had never turned down any reasonable request. Our furnishings were more than merely comfortable. We were also permitted free access to the Genevan public library network and allowed a certain level of social interaction. Nestor and I, for example, offered several basic-skills tutoring sessions a week to any Rabbit or Dog whose owners might permit them to attend, and I’d spent not just one but many pleasant evenings dining with (by now) most of the officer corps of the New Genevan military. I’d even been allowed—under friendly but firm escort—to travel about the Station a bit from time to time in order to buy new clothing and such, and to show Nestor the suite of rooms where the big wargame tournament I so often spoke of had once been held. All in all the eighteen months I’d spent so far aboard Geneva Station were quite pleasant, and I never could understand quite why Prince Neville—who I wasn’t supposed to know was interned just down the hall and around the corner in a slightly larger set of rooms—spent so much of his time shouting and complaining and punching walls and generally being unhappy with everything in sight. Had he remained my POW aboard
Richard
, his circumstances would’ve been far less comfortable. The more tantrums he threw, however, the friendlier the Genevan guards grew towards Nestor and I. So, I supposed, in the end the situation favored us.

“Don’t go taking that document
too
seriously,” I advised my friend. “Or else next you’ll be talking about the consent of the governed and the universal rights of man. Which is exactly what got the Empire in such trouble to begin with.”

He smiled back and shut off his reader. “I know,” he answered. “Still… Democracy looks like such a good idea, in theory.”

“In theory, it is,” I allowed. “Even His Majesty has said that he’d support it, if it had a better track record. But as things are…”

Nestor nodded sadly and sighed. Democracy had been largely consigned to the dustbin of history due to pragmatic rather than theoretical difficulties. The core problem was that the larger and more complex a society grew, the more central direction and expertise was required to run things. It was impossible for an elected legislature—whose primary skillset by definition had to be an extraordinary ability to win elections—to effectively oversee matters as diverse as monetary policy, environmental regulation, transportation infrastructure, law enforcement, taxes, education, foreign policy, and so many others that the complete list would run to hundreds of pages. Over time the legislators were forced to delegate more and more of the
real
power to highly-skilled specialists who remained in office and honed their skills for their entire lifetimes, and were also
much
too busy exercising power to trouble themselves with insignificant, transient affairs like elections. Add in the difficulties of governing a population so widely dispersed that it took well over a year by the best available means to travel from one furthest reach to another, and, well… Gradually the elected bodies faded away entirely, leaving only the bureaucrats. Both our own kingdom and the breakaway Empire could trace their roots directly to the old United Nations of Earth, whose declared purposes had included spreading ‘self-determination’ everywhere men lived. Indeed, to this day both of Their Majesty’s claimed ‘Secretary General of the Human Race’ as one of their minor titles, and most of the Houses could trace their origins to various power-nodes within the so-called ‘Security Council’ nations. In the end, sociologists claimed, the power remained in exactly the same place it’d always been, even back when the commoners had been allowed to vote on the matter. The labeling was more honest nowadays, was all.

“I still don’t know,” Nestor replied, setting his reader down and yawning so hard his toes curled. “All these Lords and Dukes and Baronets… It seems so silly.”

“That’s because it is,” I agreed. “Humans love their status-games and titles better than their own children. Which is part of why it’s so nice to be a Rabbit instead, at least in some ways.” Then I yawned too. It was contagious, apparently. “What’s on for tomorrow?”

Nestor picked his reader up and flipped to a new page. “Basic math in the recreation center from nine to noon,” he answered. “Then lunch with Ambassador Clark. Your afternoon is free.”

I nodded and scowled. Tutoring math was all well and good. It was relaxing, even; I always enjoyed spending time with my fellow gengineered beings. And the ambassador was good company as well, especially since he served as my one remaining uncensored link to the outside world. He made it a point to drop by once a week, which was far more often than he really should’ve given his very full wartime schedule in such an important posting. But that long, empty, endless afternoon…

“You could work on your history paper!” Nestor suggested, perfectly aware of what was bothering me. “Or, hit the academic books again.”

I sighed; long ago I’d been promised a slot in the Naval War College, one of the most precious appointments an officer could receive. But I’d sort of been interrupted on my way to school. The ambassador had most kindly ordered a full set of textbooks for me. I’d read them over and over by now of course, and yet… They amounted to little more than a dry and theoretical discussion of the essentials of naval strategy and logistics. Quite frankly, Professor Lambert’s innovative class back at the Academy was better preparation for real, actual war than the whole twenty-something volumes in the College’s syllabus. So, clearly, there must be something that the instructors provided in-person that served as the
real
preparation for a career as a high-level decision-maker. But whatever it was, I’d not find it in my little apartment in Geneva Station.

“Maybe,” I agreed. More and more I felt like the world was passing me by—somewhere out there a huge bloody meatgrinder of a war was still raging away, one of a series of wars whose results would determine the ultimate fate of all the sentient races. And here I was, sitting in a comfortable easy chair in nice, safe Geneva Station as destiny reshaped itself all around me. But none of this was Nestor’s fault, I reminded myself. So I forced a little smile. “Or perhaps we’ll play some chess. In any event, we’ll make the best of it together.”

“…of course negotiations continue regarding your exchange,” the ambassador continued after lunch the next day. Meanwhile, Nestor served him a second cup of tea. To date he was the only human I knew of who liked the same blend that I did—most of my acquaintances considered the stuff far too “grassy”. Of course he was also one of the kingdom’s leading diplomats, or he wouldn’t be in such in an important posting. Which meant that he might well be forcing the stuff down with a smile just to make me feel more comfortable in his presence. With diplomats, the line between honesty and pragmatism was often so finely subdivided into shades of gray that I suspected even they’d lost track of the truth long ago. Not that Sir Chester Clark was a bad man—he was simply a diplomat, was all. Which one forgot for even an instant at one’s deepest mortal peril.  “I fear I’ve little progress to report—the putative issue remains one of relative rank.”

I nodded. The rest of
Richard
’s crew had long since been exchanged for various little this’s and that’s captured by Royal forces, most of them by virtue of a shipload of highly-skilled technicians taken alive by my old friend Captain Blaine. But things kept stalling out when it came to the Prince and I. The actual truth of the matter was that his Imperial Majesty, having given in to sentimentality by ordering his son to surrender, was now having great difficulty living with the fruits of his decision. Everywhere in Imperial space, I was told, people were whispering about how their leader’s sons were too good to die, though of course
their
children were fit only to serve as cannon-fodder. Morale had fallen noticeably among our foes; they no longer gave their lives nearly so freely.  So in essence the Imperials didn’t
want
the Prince back, at least not right at the moment. Indeed, the
last
thing they needed was to have the whole sordid affair splashed all over the headlines yet again. Besides, the ambassador had hinted more than once with a twinkle in his eye, the Emperor was perfectly content that I remain exactly where
I
was, as well. So they pretended to stand on principle, even though we two by any reasonable measure were clearly of roughly equal value in exchange terms. “He’s a mere Rabbit!” the Imperial negotiators would shout haughtily, knowing the truth all the while. “How dare you insult us by offering to exchange a Prince of the Imperial Blood for a mere Rabbit?” And so my internment went on and on and on, into an indefinite and murky future.

“On the positive side of the equation,” the ambassador continued after another sip of tea, “We’ve won another battle, this time at Orion Four. It was a mere raid; no invasion was ever contemplated. But the enemy lost a light cruiser against our damaged destroyer. Captain Fontaine was in overall command. It’ll be in the local papers tomorrow, or perhaps the next day.”

I nodded and smiled, even though the ‘victory’ was obviously of little substance. This war was shaping up a bit differently than past conflicts—the Imperials had seized three planets and offered terms, which His Majesty had flatly rejected. This refusal was a sharp break with the patterns of the past, and I yearned to know more about what had changed and why. But despite all the good treatment the New Genevans were offering Nestor and I, our little apartment could never be considered secure enough to discuss anything substantive in regards to grand strategy or military movements. I was, in other words, as out of touch as any civilian. That hurt as much as anything.

“Both His Highness and the Duke of Marcus”—that was James, of course—“send their fondest good wishes,” the ambassador continued, obviously preparing to leave. It was how he always closed these little meetings. “Is there anything you require?”