Captive Paradise: A History of Hawaii 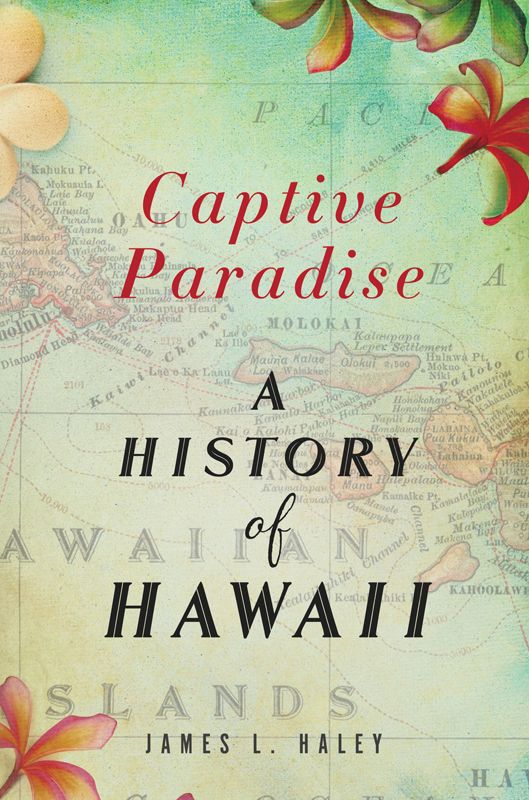 To Jody and Lesli,

and Spencer and Kate

The Kings and Queens of Hawai‘i

Missionaries to the Sandwich Islands (Owhyhee)

1.
The Loneliness of a God

3.
The Suicide of
Kapu

9.
A Nation Among Nations

If a big wave comes in, large fishes will come from the dark Ocean which you never saw before, and when they see the small fishes they will eat them up. The ships of the white men have come, and smart people have arrived from the Great Countries which you have never seen before. They know our people are few in number and living in a small country; they will eat us up.

The nation that draws most from the earth and fabricates most, and sells most to foreign nations must be and will be the greatest power on earth.… This is to be looked for in the Pacific.

Throughout recent years, activists agitating for the independence of Hawai‘i occupy the grounds of the ‘Iolani Palace in Honolulu, the only former royal palace on American soil.
1
They do this periodically. They want to draw attention to what, in their view, was the unconscionable way their country was annexed by the United States in 1898, in the name of cheap sugar and the needs of American imperialism (although, as we shall see, it was much more for the latter reason than the former). The full story of how the United States got its hands on the Kingdom of Hawai‘i is virtually unknown among the mainland general public, and I began this volume as a history of Hawaiian annexation.

I quickly discovered, however, that such a narrow focus could not begin to embrace the kingdom’s tumultuous journey, which ended with its absorption into the United States. Discovered by the British in 1778 as the most isolated and strategically important islands on earth, the country endured the clash of empires as the British, French, Russians, Japanese, and Americans all contended for influence with the native monarchy. From the mayhem of civil war every time a king died, a preeminent conqueror arose: Kamehameha, who waged war and suppressed rebellion for thirty years before he could call himself master of all the islands in 1810. From a precontact culture of idol worship and human sacrifice, refugees from the Kamehameha conquest reached the United States, gained an education, insistently challenged American Christians to send missionaries to end the pagan terror, and in fact led the first missionaries back to their homeland. And then the struggle was on for the next seven monarchs: to balance bringing their people into the Industrial Age while preserving for them some sense of cultural identity; to maintain the sovereignty of their country while dealing with the greediest and most powerful empires in the world; to provide a modern economy and wealth for their people while becoming snared ever tighter in the grip of the American economic colossus. For all this to have taken place in the span of one human lifetime is a pageant of imperial triumph and human tragedy rare, if not unknown, elsewhere in history.

Dating back from annexation in 1898, the United States could never have captured Hawai‘i politically had it not first come to dominate the islands’ economy, and that moves the story back to the 1860s. Equally, it could not have dominated the economy without first capturing the people spiritually and culturally, and that moves the story back to 1820. But the American hand was felt even before that, in a bullying sea captain who inadvertently provided Kamehameha the technology needed to conquer the country, and in the mostly American traders who introduced the chiefs to luxury consumer goods—and how to go into debt to acquire them. Annexation, then, can only be understood in this broader context of the Americanization of Hawai‘i.

Oddly, there has never been a narrative history of Hawai‘i. There was a great deal of academic appraisal of the subject in the decades leading up to statehood in 1959, much of which has been reprinted for current reading. And James Michener’s famous novel
Hawaii
, which rocketed him to literary stardom, came out in the very year of statehood. Modern academic studies have been rooted in the reigning “politically correct” paradigm of race, gender, and exploitation—which as it turns out are highly appropriate lenses through which to view the islands’ history. But the Hawai‘i I found is far more complex. Early in the process I had coffee with a distinguished history professor friend of mine, to discuss my possible return to graduate study, looking toward completing a long-abandoned Ph.D. He asked how my Hawai‘i work was coming, and I said that while I was finding little to change my opinion that the 1893 overthrow was indefensible, I was also increasingly surprised and troubled by the pervasive oppression of the common people by their own chiefs and kings before Americans ever showed up. I cited several examples; the professor nodded and allowed that this was indeed the case, but he warned me that if I wrote the book that way and did not “position” the Hawaiians as victims of
American
racism and exploitation, as he said, it “won’t help you get accepted back into grad school.”

I marinated in this irony for a few moments and said, “This must be what they mean by academic freedom.” Noting my shock, the professor went on to say that race, gender, and exploitation have ruled the scholarly paradigm for thirty years, and are entrenched for probably thirty more. He has made his peace with it, and he has disciplined himself to teach and write in that vocabulary. But it also seemed clear that when the actual facts of the history conflict with the reigning theoretical model, it may fall to nonacademic writers to disseminate a more nuanced narrative. The danger with this, of course, is that many “trade” writers who frolic in the vineyard of history are not trained historians, and are liable to seize upon the ill-conceived or the sensational—a trap that has admittedly also snared a history professor or two.

All this is meant only to express my sense of responsibility in handling a subject as multifaceted as Hawai‘i. I knew going in that discussion and reexamination of how to interpret the islands’ history is in active ferment, but what I found was an intellectual community in near riot over control of the narrative. “Revisionism,” very often appropriate but sometimes excessive, provocative, and overreaching, is a given feature now of American history as presented in the academy. Hawai‘i, however, has placed the phenomenon in a pressure cooker, by its isolation from other fields of history, by the long suppression of the native culture and the suddenness of a rich profusion of studies that incorporate it. Consequently, it is not unusual to find summaries of the American missionaries in Hawai‘i that treat their presence as a foreign invasion, but it is incomplete and misleading to exclude mention of Opukaha‘ia, or Hopu, or other refugees from the Kamehameha conquest, with their insistent challenges to the American Christian community to evangelize the islands and end the horrors of endless warfare and
kapu
—the ancient regimen of taboos. One history of the Chiefs’ Children’s School, apart from acknowledging that the enterprise was undertaken at the request of the
ali‘i
—the noble class—treats it as a purely American ethnocentric gutting of the native culture, and omits any mention of the scholarly John Papa ‘I‘i,
kahu
of the king’s niece and nephews, who functioned as a vice principal of the school, who appreciated the good that both cultures had to offer, and who was an important bridge from the old culture to the modern world.
2

This debate over historical candor is hardly new. No sooner had Hawai‘i’s first printed chronicler, Samuel Manaiakalani Kamakau, begun relating “Ka Mo‘olelo Hawai‘i” (The History of Hawai‘i) in the Hawaiian-language journal
Ka Nupepa Kuokoa
in June 1865 than he suffered robust criticism from readers who were offended that the knowledge was being imparted to those who had no permission to hear it. “This subject is not acquired by the common people,” huffed Unauna in an opinion editorial, “nor by the country people; only through the chiefs was it gained.… In ancient times this was a very sacred subject, never to be given to another.”
3

Three years of research have chastened me with the sense that virtually nothing in Hawaiian history has a single cause, and virtually no one acted out of a single motivation. It is not a simple history, and it cannot be explained simply, certainly not with recourse to the easy remedies of a previous academic era—native savagery and simplicity—or of the current one—the Anglo sense of hegemony and entitlement. It is undeniable, for instance, that the arrival of Western venereal diseases decreased the natural fecundity of the islanders, but that does not, contrary to the impression one gets from museum displays, explain the expiration of the Kamehameha dynasty. Like Egyptian pharaohs, the
ali‘i
had been preserving their
mana
—their spiritual force—by inbreeding for centuries. That probably was partly responsible for the fact that no Kamehameha after the Conqueror sired any (legitimate) children who lived to adulthood. Similarly, that Queen Ka‘ahumanu witnessed the failure of
kapu
to prevent the decline of her people does explain in part her motivation to overthrow this ancient system of social control; it is also true that she adored power and had no intention of taking a backseat after the death of her husband, the Conqueror. It is true, for another example, that the prudishness and Anglocentrism of the missionaries wrecked a complex and in many ways lovely indigenous culture; it is also true that some facets of that culture were savage. As constrained as one is today to treat the values of differing cultures with respect, some of the traditional Hawaiian practices, such as human sacrifice and infanticide, were savage: No other word serves. It is true that the missionaries did not have the foresight to let the benefits of education and incipient democracy leaven the native culture in their own way. It is also true that neither did any other colonizing culture of that or any preceding era, and even if they had, it is doubtful that an enlightened native culture would have survived late-nineteenth-century imperialism, whether American, British, Japanese, or anyone else’s. But as one native minister was heard to complain, “America gave us the light, but now that we have the light, we should be left to use it for ourselves.”
4
If only
that
idea had caught on, the history and the lessons to draw from it might be radically different. But as it is, one Web site promoting Hawaiian tourism writes on its history page that “it is difficult to find an objective Hawaiian history that is accurate and unemotional.”
5
My goal with this book is to make that a little less difficult.