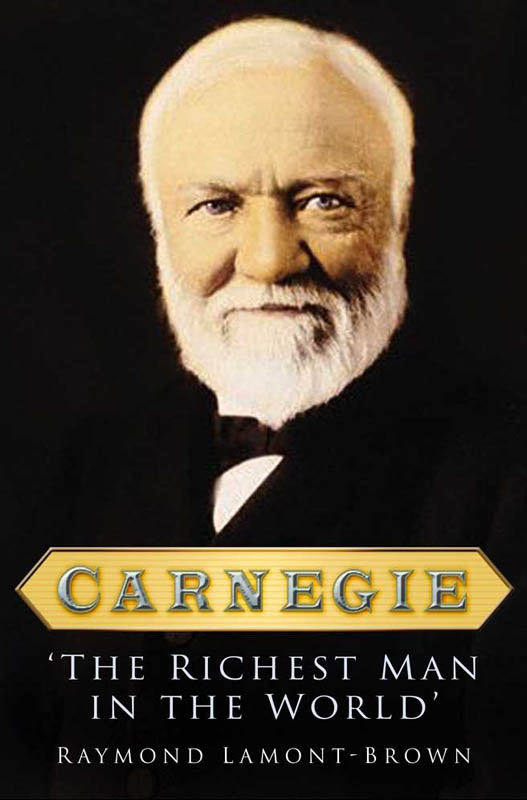 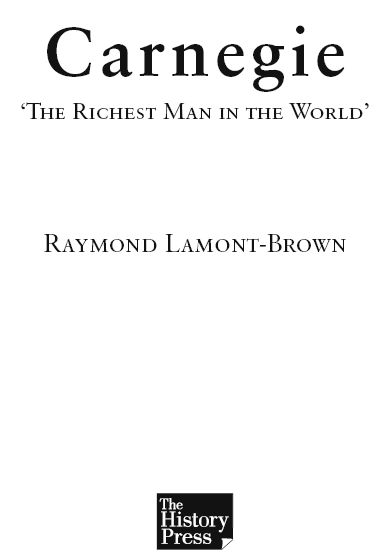 First published in 2005 by Sutton Publishing

This paperback edition first published in 2006

This ebook edition first published in 2013

The right of Raymond Lamont-Brown to be identified as the Author of this work has been asserted in accordance with the Copyrights, Designs and Patents Act 1988.

T
his volume has been enhanced by a review of the biographical work done on Andrew Carnegie by three writers in particular. The ‘official’ biography,
The Life of Andrew Carnegie
(1932), was written by Burton Jesse Hendrick, and remained the key work until the appearance of the biography
Andrew Carnegie
(1970) by Professor Emeritus Joseph Frazier Wall; Wall also wrote a study of Carnegie’s Scottish home at
Skibo
(1984). In more recent times Peter Krass’s
Carnegie
(2002) has added and expanded biographical research on Carnegie. Funded by Carnegie’s daughter Margaret Carnegie Miller, Burton J. Hendrick wrote a biography of Mrs Carnegie,
Louise Whitfield Carnegie
(1950), which was completed after Hendrick’s death by Daniel Henderson. In 2000 Linda Thorell Hills, great-granddaughter of Andrew Carnegie, edited the journals of Carnegie’s daughter for private circulation. Simon Goodenough produced an important work on Carnegie’s trusts and foundations in
The Greatest Good Fortune: Andrew Carnegie’s Gift for Today
(1985). To each of these writers I offer my gratitude for a sight of their research.

Much assistance has been given in compiling the book by the following, all of whom receive my indebtedness: Mrs Lorna Owers, Administration Manager, Andrew Carnegie Birthplace Museum; the Earl of Elgin & Kincardine, KT; Mr M. Farmer, Principal, Kilgraston School, Perth; The Carnegie Dunfermline & Hero Fund Trustees, and the Carnegie Trust, both at Dunfermline. Mr Angus McLaren, Club Captain of the Carnegie Club, Skibo, Sutherland, has also rendered important assistance on Carnegie’s Scottish ‘heaven on earth’. A special thank-you goes to Mr William Thomson, great-grandson of Andrew Carnegie, for information and advice on the Carnegie family past and present. A particular appreciation is expressed to my wife Dr E. Moira Lamont-Brown, who has acted as companion and helper on my tours of Scotland in search of Carnegie’s ‘Scottishness’.

Illustrations
: Each is identified
in situ
for ownership. Grateful thanks are offered to Laura Whitton of the Picture Library, National Portrait Gallery, London, for tracing and identifying images.

Copyrights
: Every effort has been made to trace the copyright holders of works quoted in the text, although the death of authors and reversion of rights often makes this difficult; however, each quote is sourced in the notes. Thanks for granting permission to quote from their copyright works are due to Peter Krass, Linda Thorell Hills and William Smith of Oxford University Press Inc., New York, on behalf of the Joseph Frazier Wall volumes. In 1986 Northeastern University Press (Houghton Mifflin Co.), Boston, produced a new edition of Andrew Carnegie’s autobiography. Carnegie’s original publisher – Charles Scribner’s Sons – is now a part of Simon & Schuster Trade Division, New York.

The Doomfarers of Coramonde by Brian Daley
Heaven and Earth by Nora Roberts
Faery Queen by Michelle M. Pillow
Moondust by J.L. Weil
The Goddess Legacy: The Goddess Queen\The Lovestruck Goddess\Goddess of the Underworld\God of Thieves\God of Darkness (Harlequin Teen) by Carter, Aimée
Forever Mine by Marvelle, Delilah
The Year of the Beasts by Cecil Castellucci
Up by Five by Erin Nicholas
Who Dares Wins by Chris Ryan
The Biker's Secret Torment: MC Romance: Talon (Rosesson Brothers) by Ladew, Lisa