Read Castaways in Time (The After Cilmeri Series) Online

Castaways in Time (The After Cilmeri Series) 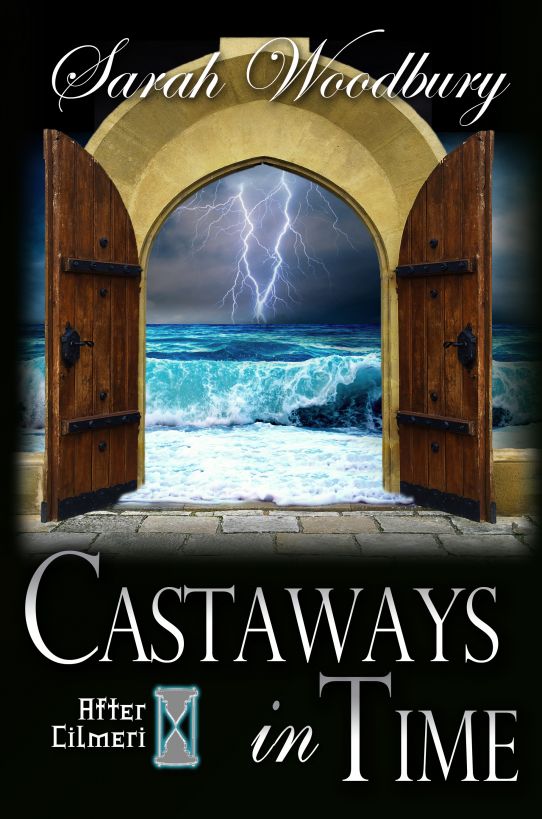 A Novel from the
After Cilmeri
Series

With a scarlet fever epidemic raging
throughout London, a rogue baron on the loose, a new baby keeping
him up at night, and a kingdom to run, the last thing David has
time for is a trip to the twenty-first century. But as he should
know by now, time waits for no man, not even the King of England
…

Castaways in Time
is the seventh
novel in the
After Cilmeri
series. Other books in the series
include a novella,
Winds of Time
, and six novels:
Daughter of Time
,
Footsteps in Time, Prince of Time,
Crossroads in Time
,
Children of Time
, and
Exiles in
Time
.

Comes the sun to the hill …

Books in the After Cilmeri Series:

Footsteps in Time
(Book One)

The Gareth and Gwen Medieval Mysteries:

Other books by Sarah Woodbury:

Cold My Heart: A Novel of King Arthur

A Brief Guide to Welsh Pronunciation

u
a short ‘ih’ sound (Gruffydd), or a
long ‘ee’ sound (Cymru—pronounced ‘kumree’)

y
the only letter in which Welsh is
not phonetic. It can be an ‘ih’ sound, as in ‘Gwyn,’ is often an
‘uh’ sound (Cymru), and at the end of the word is an ‘ee’ sound
(thus, both Cymru—the modern word for Wales—and Cymry—the word for
Wales in the Dark Ages—are pronounced ‘kumree’)

Meg (Marged)—Queen of Wales, mother to David
and Anna

Ieuan—Welsh knight, one of David’s men

Edward I (deceased)—King of England

Edmund Mortimer—Lord of the March

Gilbert de Clare—Lord of the March

“
I
know you’re
busy, but we needed to see you before you left.” Bronwen stepped
through the doorway into David’s office.

David glanced up from the last-minute papers
he was signing, looking past her to Lili, who’d entered the room
too. He stood to take the sleeping Arthur from Lili’s arms and
kissed both his baby and his wife. Bronwen smiled, hardly able to
believe that this was the same sixteen-year-old boy who’d dropped
into her life four years ago, and whose man-at-arms had plucked her
from her former life as a graduate student in archaeology and
brought her to the Middle Ages with him.

Already dressed in her breeches in
preparation for their upcoming journey, Cassie was the last to
enter the room. She closed the door behind her and found a chair
next to Bronwen, who set the wooden box she’d been carrying onto
David’s desk.

“Well, isn’t this a rogues’ gallery? To what
do I owe the pleasure?” David leaned back in his chair, rocking his
son and smiling at the three women arrayed in front of him. “I’ve
known for a while that you guys were up to something. Are you
finally going to tell me what it is?” He spoke in modern American
English because Lili’s grasp of that language was better than
Cassie’s Welsh. While they’d started out trying to speak medieval
‘English’ when talking among themselves, Lili had complained that
American crept in at every third word, and she’d had to learn it
out of desperation.

Almost breathless with anticipation at what
David’s response was going to be, Bronwen reached into the box and
lifted out a tray.

David recoiled as she’d hoped he would.
“What the—!” He cut himself off with a glance at his son in his
arms.

Bronwen smiled all the more. Arthur was only
three months old, and David was already watching his language.

“It sure is,” Bronwen said.

David stared at her creation as she placed
it on his desk, and then he looked into her face. “Is that a
cantaloupe? Or should I say,
was
that a cantaloupe?”

“Where’d you get a cantaloupe?”

“There are some benefits to being the Queen
of England,” Lili said.

“A Genoese trader brought them to me a few
weeks ago,” Lili said.

“This one was grown in Italy. She
requisitioned ten of them,” Cassie said.

Bronwen poked at the fruit with a quill pen
from David’s desk. “Our friend here is the one that produced what
looked like the best mold.”

“Why on earth would you want to create moldy
cantaloupe?” David said. “And why are you all grinning at me?”

“What we have here, my lord, is penicillin.”
Bronwen used the honorific because it amused her to do so. “I
hope.”

“Do we really?” David leaned in to study the
mold.

Bronwen recognized the look on his face. It
was one he wore when he was giving something his full
attention.

“Now that is good news indeed,” David said.
“How did you know to use cantaloupe?”

“Anna found a discussion of penicillin in
those papers you printed out when we were at your aunt’s house four
years ago,” Bronwen said. “Don’t you remember including it?”

“I remember printing off the information. I
used up a whole ream of paper,” David said. “I couldn’t tell you
half of what I printed out, though, especially the pages that had
to do with medicine. I had half a day to sift through the entire
internet to collect everything I could think of that could be
remotely important to us.”

“Okay,” Bronwen said. “To summarize: most
penicillin molds have no antibiotic properties, and most cantaloupe
molds don’t either, but in 1941, a woman found a moldy cantaloupe
in a market in Ohio or Iowa or somewhere like that—blue-green and
secreting a yellow goo—which the government turned into enough
penicillin before D-Day to treat two million injured soldiers.”

“Sounds great,” David said. “How do we get
from here to there?”

“We can’t,” Bronwen said, “but we can get
further along than we are now, and that’s what we need Anna
for.”

“Wait a minute.” David looked up from poking
at the mold. “Anna’s here?”

“No, of course not,” Bronwen said. “A rider
came in this morning, however, to say that she, Math, and the boys
are on their way.”

David gave a tsk of disgust. “I’m going to
miss them.”

“You’ll just have to finish up this business
with Valence as quickly as you can,” Lili said.

Bronwen eyed her sister-in-law. Lili had
remained relentlessly cheerful all this week about David’s upcoming
journey, but the inherent danger in it had them all on edge. Over
the last year, William de Valence had been the driving force behind
a series of plots against Wales, against Scotland, and against
David personally. Everyone knew that Valence couldn’t be allowed to
continue his shenanigans, but the fact that he was currently
residing in Ireland made him difficult to pin down. David had
deprived him of his lands in England and Wales already; Valence was
supposed to have removed himself from his castle at Wexford in
Ireland too, but he continued to range freely throughout his Irish
estates, snubbing David’s authority.

Thus, that very day, David was leaving with
Callum and Cassie for Ireland. The pair had returned from Orkney
without having uncovered any conclusive evidence that Margaret of
Scotland had been murdered. That failure had made David realize
that he had to deal with Valence before anyone else died from
unspecified causes. To that end, he’d put together a coalition of
barons, both Norman and native Irish. It would be David’s first
visit since he became Lord of Ireland (and King of England), and he
could not postpone it for even one day to see his sister. Gilbert
de Clare had already departed to pave the way for David’s arrival
and to begin preparations for the assault on Valence’s
stronghold.

“I’m glad she’s coming,” David said. “I like
knowing that all of you will be together for once.”

“Quite aside from wanting to see her, making
penicillin is something I don’t have the knowledge to do on my
own,” Bronwen said. “Not only does she have all the pages you
printed out, but she’s been working with Aaron and the other
physicians far more than I have. She told me I needed some
cantaloupes, but not what I should do with them once they started
growing mold.”

A knock came at the door, and Callum poked
in his head. “We’re ready.”

David held up one finger. “I need a minute,
Callum. Probably more than one.”

Callum surveyed the three women sitting in
front of David and bestowed a grin on them before saying, “I’ll
tell the men.” He held out his hand to Cassie, who rose to her feet
and took it.

“I wanted to be here to see your face when
you saw the mold, David, but I have a few last-minute things to see
to,” Cassie said. “This is Bronwen and Lili’s party.”

David nodded and lifted a hand without
actually looking at her, distracted again by the swath of
blue-green mold on the cantaloupe. “Was it hard to grow?”

“It was easy,” Bronwen said. “I cut open the
cantaloupe and
voilá
!”

“Can penicillin help us with the recent
measles epidemic in London?” David adjusted Arthur in his arms. The
baby yawned, and David jiggled him a few times to settle him back
down to sleep.

Bronwen shook her head regretfully. “Measles
is caused by a virus. Some of the policies you instituted have
helped control its spread, but only a vaccine is going to seriously
curb it. Scarlet fever, on the other hand, is caused by bacteria.
This should work on it.”

“Thank God,” David said. “Tangible results
are what we need.”

When David had taken the throne of England,
it was as if a bomb had gone off in the English court. He was from
the outside and hadn’t grown up at court with its traditions and
expectations, and thus, he didn’t take anything anyone said at face
value. He was completely willing to shake up the status quo if it
meant getting done what he wanted done. Ironically, that made him
similar to his predecessor, King Edward, and they had more in
common than David might want to admit. Like Edward, he had no
patience for blowhards or sycophants and wasn’t afraid of making
unpopular decisions. But unlike Edward, he was careful to wear a
velvet glove over his iron fist, which was perhaps why Valence
consistently underestimated him and believed he could defy David
with impunity.