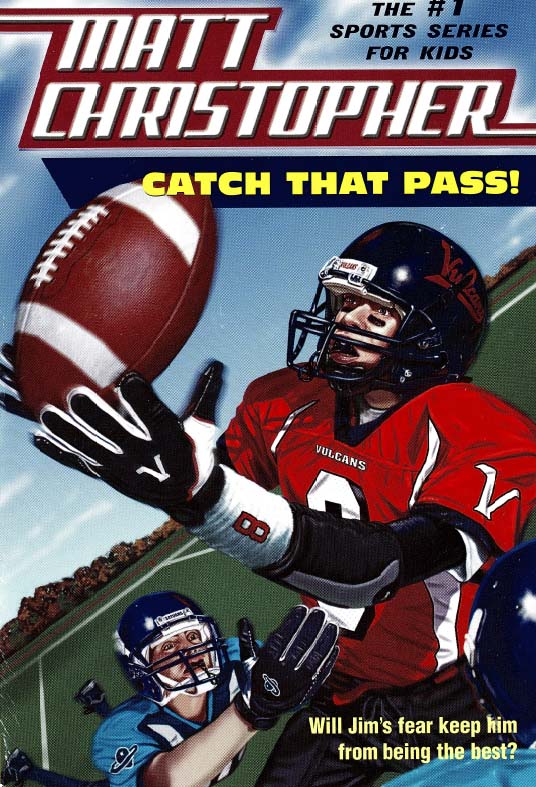 Matt Christopher
®
is a registered trademark

The pass down. The Cadets had to pass. They weren’t gaining enough yardage on the ground.

Jim Nardi stationed himself in the middle linebacker slot in front of the Cadets’ center. To his far left was Bill Brown,
to his far right Yak Lee. The cornerbacks and safety men were spread wide in a parallel line behind them.

The snap from center. Jason faded back.
The Vulcan and Cadet lines tore into each other in a crash of helmets and shoulder pads.

Jim bolted through the narrow hole between right guard and center, then stopped. Jason had thrown a pass, and the ball was
lobbing over Jim’s head!

Jim leaped. His hands wrapped around the ball and brought it down. In the same instant, he saw a red-and-white helmet and
blazing red jersey coming at him. The thick padded shoulders looked like the shoulders of an angry, charging bull.

Jim’s nerves shattered like glass. Frantically he flung the ball to the ground.

The whistle stopped the would-be tackier. Less than a yard from Jim, he grinned behind the double bars of his face mask.

He spun on his heel and started back to his position when a hand grabbed his elbow. He looked into the angry eyes of Hook
Wheeler, the left safety man.

“You had it in your mitts! Why’d you knock it down?”

Their eyes clashed. “It was slipping out of my hands,” said Jim. Darn Hook! Why didn’t he mind his own business?

“Slipping, my eye! You had it in your mitts! I saw you! Everybody did!”

The whistle shrilled. “Come on,” snapped the ref. “Let’s hustle it up.”

Fourth down and eight. The ball was on the Cadets’ twenty-seven-yard line. The Cadets went into punt formation. Their fullback
kicked the ball—a long, spiraling aerial. Hook Wheeler caught it on the Vulcans’ thirty-eight and carried it across the forty—
the middle of the Midget football field—to the Cadets’ thirty-one.

The defense went out; the offense came in. Someone slapped Jim Nardi on the back. “No harm done, Jim. We got the ball anyway.”

Jim looked at Bucky Hayes, the husky left tackle and Jim’s close buddy. “It … oh, never mind.” He wanted to tell Bucky, too,
that the ball had slipped, but why lie about it? Why talk about it at all? He’d hang on to it the next time, if there was
a next time.

He trotted up to the bench, avoiding Doug’s eyes. Doug was his brother and coach of the Vulcans. He was in college and had
played football his freshman year. In high school he had made All-State end.

“What happened out there, Jim?” he asked quietly.

“When you knocked the ball down.”

“Well, that’s all. I knocked the ball down.”

“But you had it in your hands.”

Chris Howe quarterbacked the Vulcans. He got the ball to the Cadets’ nine-yard line. Then the Vulcans lost five yards on an
offside penalty. On the next play, Chris flipped a spiral pass into the end zone, hitting left end Ben Trainor a yard inside
the out-of-bounds line for a touchdown. Fullback Ronnie Holmes kicked the conversion. Seven to nothing.

In the second quarter, a Cadet safety man picked off a pass Chris had intended for Pete Witz, the flashy right end. The Cadet
was pulled down on the Vulcans’ fourteen. They tried a double reverse and gained six
yards. Jim Nardi made up his mind that no runner was going through the middle. He’d stop any man cold who would try.

The quarterback faked a run through right tackle, drawing some of the players toward that side of the line. But the fullback
had the ball! He was fading back behind the right side of his line. He was looking toward the coffin corner. And then he passed.

He was clever. Instead of throwing to the coffin corner, he threw to the right center of the end zone near the goalpost. Jim,
breaking back away from the scrimmage line, sprang a couple of steps toward it, leaped, and caught the ball!

As he came down with it, he saw a bright red helmet with a white stripe through its middle. He saw the bulging shoulders of
a blazing red jersey.

He got panicky. He didn’t want to be hit. He was
afraid
to be hit.

He let the ball drop. The Cadet fell on it. So little time elapsed between the moment Jim caught the ball and dropped it that
the call could’ve been either way—a completed pass or an incomplete pass.

Jim turned and almost bumped into Hook. “What’s the matter, Nardi?” Hook snarled. “That’s the second time you dropped the
ball! I suppose it slipped through your hands this time, too.”

The Cadets’ tight seven-man line looked like a red wall facing the Vulcans. The Vulcan linebackers played up close, intent
on plugging every possible hole. Only the two safety men played deep, watching for a forward pass.

The snap from center. Jason handed off to his fullback. The fullback cut toward right end. For a split second, Jim wondered:
Was this another pass play?

It wasn’t. The fullback plunged around
end, and Hook Wheeler pulled him down on the five. On the next play, Terry bucked through for a yard. It was close to a first
down. The men with the chain ran out and measured. A first down!

First and goal to go. Four yards for a touchdown.

Terry barked signals. He took the snap, faded back a few steps, and passed. His left halfback caught it on the one-yard line
and plunged over for the score. They tried the conversion and missed.

“See what happened?” Hook bellowed at Jim. “If you had held on to that ball, it would’ve still been seven-oh!”

Right safety man Dil Gorman tapped
Hook on the shoulder. “Leave him alone, Hook. You ever notice his narrow waist?”

Hook grinned crookedly. “That’s right,” he said. “He hasn’t got room for guts!”

Again Jim saw red, but this time it wasn’t the color of an opponent’s jersey. It was hot, flaming anger. He knotted his fists
and stepped toward Hook, ready to let him have it. Then he stopped. No, he thought. No matter how badly he wanted to make
Hook eat those words, he wasn’t going to fight here. He’d be thrown out of the game. Maybe Hook would be thrown out, too.
The only thing to do—the best thing to do—was to ignore the wise guy.

It was awful to admit that both Dil and Hook were right. But they were. Every time Jim tried to intercept a pass, he would
see an opponent come at him and that terrible fear would sweep through him and rush to
his head and swell as if it were ready to explode. He had to get that feeling out of his system. He had to or he’d never play
football in high school. Doug might not even let him keep playing with the Vulcans after this, their first game of the season.

Someone slapped him on the back. “Did you hear a time-out or something?” It was Bucky.

They lined up for the kickoff. The whistle shrilled. The Cadets’ line sprang forward. The fullback booted the ball. It sailed
end over end into Vulcan territory. Hook caught it on the twenty-two and bolted up the field, twisting and dodging.

“C’mon! Give me interference!” Hook shouted.

Jim Nardi fell in front of a Cadet, then got up and blocked another Cadet as he headed
toward Hook. The block helped Hook gain another six yards. He was tackled on the Vulcans’ thirty-four.

The defensive unit trotted off the field. The offense took over.

“What went on out there?” Doug asked when Jim reached the sideline.

“Did Hook or Dil say something to you?”

Jim unbuttoned the chin strap of his helmet and took the helmet off. The cool air refreshed his sweating head. “Okay. They
made me sore. But I didn’t do anything, did I? I didn’t start a fight, did I?”

Jim met Doug’s eyes evenly. Doug was tall, close to six feet. His steel-blue eyes were steady. They had had their arguments,
with Doug usually winning them. But afterwards,
when Jim had a chance to think, he’d always agree that Doug was right. Like the time Doug had warned him about riding the
bike with weak brakes. Jim had been too lazy to fix them and did so only after Doug had started to take the brakes apart himself.

The game went into the fourth quarter with the score still 7 to 6 in the Vulcans’ favor. At the four-minute warning signal,
the Vulcans had the ball on their own nineteen. Chris Howe faked a handoff to right halfback Ken Morris, who started to plow
through right tackle. But it was fullback Ronnie Holmes who took the ball and galloped for eight yards through the left side
of the line.

A wild scramble followed. And loud shouting. Ronnie had fumbled the ball. A red-jerseyed player began jumping up and down.
The Cadets had recovered!

Terry Jason flung a long pass on the first play. He hit his man perfectly, and the runner carried the ball to the Vulcans’
eighteen before Hook nailed him.

“I think there’s a magnet in that ball and another one in that receiver,” observed Bucky Hayes. “No man can throw a pass that
perfect.”

“That answers it,” replied Bucky.

In two downs the Cadets moved the ball to the nine. Then Terry tried a quarterback sneak, but lost a yard.

Fourth down and two.

Dil Gorman looked at him. “A good idea,” he said. “You should’ve thought of it sooner.”

Jim flushed and looked away. He had really opened his trap at the wrong time then.

Time was up. The Cadets went into a huddle, then broke out of it and got into position at the line of scrimmage. Jim saw that
Jason was standing back and that the fullback was a couple of yards behind him. They were going to try a field goal!

Jason caught the snap and put it in position on the ground. Jim blasted through a narrow hole between center and right guard.
He heard the sound of shoe meeting football and saw the pigskin sailing over his head.

A shout rose, and Jim knew that the ball had gone between the uprights. 9–7.

That was the final score, too.

Chuckie Gorman laughed. “I’m a lap ahead of you!”