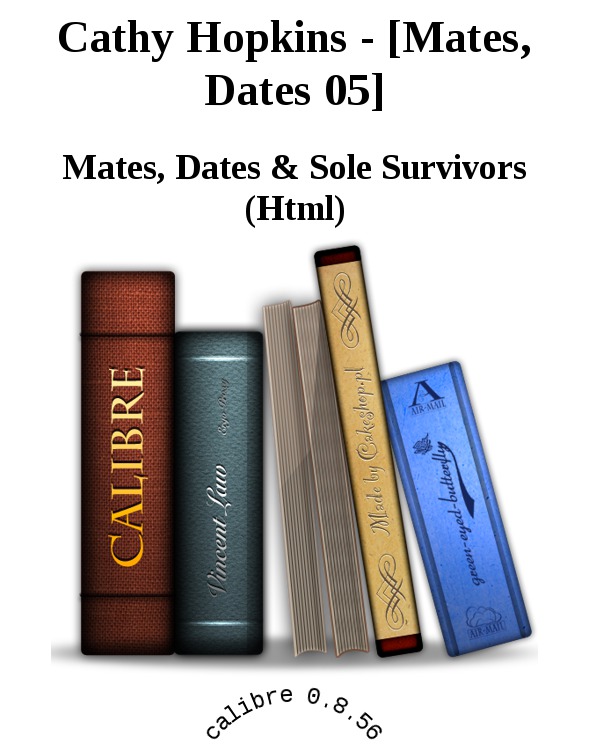 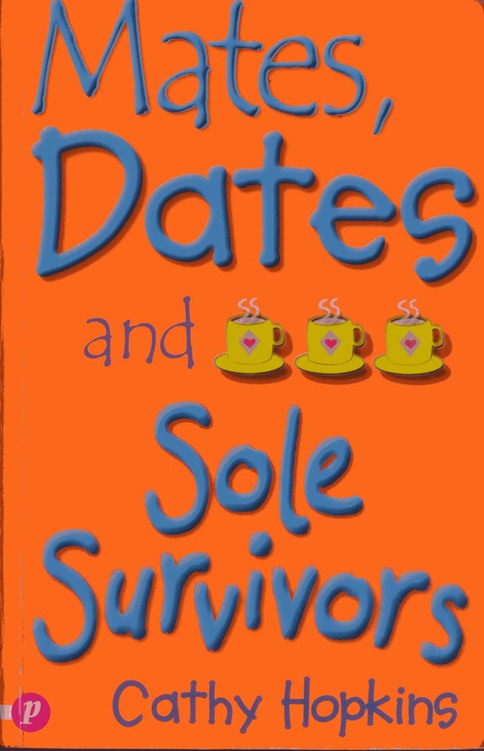 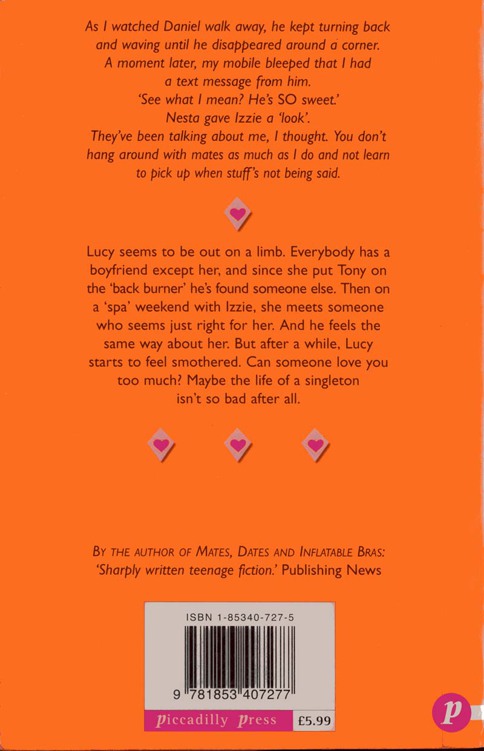 Big thanks to Brenda Gardner, Yasemin Uçar and the team at

Piccadilly, for all their support and feedback. To Rosemary Bromley

Hopkins, Annie McGrath and Olivia McDonnell, for all their emails

in answer to my questions. Also to Seeta Kadam, who sent me

‘This has to be the
best feeling in the world,’ I said to Nesta as we walked out of the school
gates on the last day of term.

‘I know,’ she
said.‘Six weeks with no Miss Watkins… Six fabola weeks with Simon before he
goes off to uni.’

‘And six weeks with
Ben for me,’ said Izzie linking her arm with Nesta’s. ‘We’re going to work on loads
of new songs for the band now we’ll have time.’

‘And I suppose we’ll
be seeing
you
round at ours a fair bit,’ I said to TJ. She’s been
seeing my elder brother Steve over the last few weeks and they’re both
completely smitten.

‘What about you,
Lucy?’ asked Nesta. ‘Going to give
my
poor brother a break at last?
You’ve been giving him the runaround for months now. I don’t think his ego can
stand much more of it.’

Six weeks with Tony?
The idea was appealing and I reckoned I was finally ready for a ‘proper’
relationship with him. We’d liked each other for ages and we had gone out for a
while earlier in the year, but then I broke it off as it felt like it was all
happening too fast. After that, there was a lot of flirting between us whenever
I saw him round at Nesta’s and he did ask me out again a few times, but I
turned him down. It’s not that I didn’t want to date him. He is gorgeous and
funny and I love his company, it’s just that he has A Bit Of A Reputation when
it comes to girls. Nesta had warned me that it was a different one every week
at one time. She says he likes the chase, then drops them the minute they show
they’re interested. So I had to play it carefully, or else by now, I’d be on
his long list of rejects and broken hearts. But it had been almost nine months
since I met him and he did keep trying, saying I was the only one for him, the
lurve of his life. I thought, I can trust him not to mess me about.

I grinned and pulled
an envelope out of my rucksack. ‘I know,’ I said. ‘I’ve been doing a lot of
thinking about him lately. And I’ve finally come to a decision.’

‘Which is?’ asked
Nesta.

‘I’ve written him a
card. Saying no more messing him about. I really like him and we’re on on ON.’

‘About time,’ said
TJ.‘I don’t know how you’ve been so cool for so long. I think I’d have fallen
at his feet the first time he asked me out.’ Then her face clouded. ‘Um, that
is, er, I don’t mean I would steal him or anything, I’m just saying I think
he’s gorgeous.’

I squeezed her arm. ‘I
know what you mean, TJ. But boys like Tony enjoy a challenge.’

‘Well, what is it?’
she said. ‘Eight… nine months you’ve made him suffer? I reckon that’s enough
challenge for any boy.’

‘I can hardly believe
it,’ said Izzie. ‘Last year, none of us had boyfriends. Now this year, we all
have.’

‘This time last year,
I hadn’t even been kissed,’ said TJ.

‘And now there’s no
stopping you,’ teased Nesta. ‘Snog Queen of North London.’

This time last year, I
hadn’t been kissed either. Tony was my first. That’s another reason I wanted to
take it slow. I didn’t want to get tied to the first boy I’d snogged. I wanted
to try a few others and see what they were like. There have been a few others
now. No one important or serious. In fact, no one who’s come close to Tony. He
still has the same effect on me every time I see him. My stomach turns over and
I get all hot and my face goes pink.

‘You’re not just doing
this because you’d be the odd one out?’ asked Izzie, pointing at my letter.

‘But I
am
the
odd one out,’ I teased. ‘You’re all tall and dark with long hair and I’m small
and blonde with short hair.’

‘I
meant
the
only one without a boy,’ interrupted Izzie.

‘No, course not,’ I
said. ‘I think I’m ready now and I want to see where it goes. To tell the
truth, I started thinking that maybe I was messing him around and playing him
along because I was scared of rejection. You know what he’s like…’

Izzie nodded. ‘Yeah,
and you’re right. You can’t let fear hold you back.’

‘I’ve been reading
this book,’ said TJ. ‘It’s by this guy called DH Lawrence and it’s about a posh
lady who falls for her gardener.’

I laughed. Typical
Nesta. Her idea of reading is flipping through
Bliss
or
Now
magazine. TJ, on the other hand, devours books - proper books. That’s why she
gets on with my brother Steve. He’s a bit of a brainbox as well.

‘Um, no, not Mills and
Boon,’ said TJ, ‘but it is a love story.
Lady Chatterley’s Lover
, it’s
called. Anyway there’s one line I really like. Want to hear it?’

‘I can’t remember it
exactly,’ she said, ‘as I didn’t write it down, but it’s something like: better
a life of risk and chance than an old age of vain regret.’

‘Yeah, cool,’ said
Nesta. Til buy that. You don’t get anywhere in life unless you go for it.‘

‘Feel the fear and do
it anyway,’ said Izzie, quoting the title of one of the self-help books she
loves so much.

‘So what did you say
in the card?’ asked Nesta.

Nesta looked offended
and poked her tongue out at Izzie. ‘I wasn’t. I was feeling the fear and asking
my question. You don’t find out anything if you don’t ask what you want to
know. So… go on, Lucy, tell us what you said.’

I knew the note off by
heart, because I’d written and rewritten it so many times. I wanted it to sound
right - cool but romantic, so he could keep it as a memento to look back on.

‘I did it like one of
those Japanese poems,’ I said, ‘you know, the ones with only three lines that
we did in English last term. Haikus.’

‘Whatever,’ said
Nesta. ‘So what did you write in your hiccup?’

‘I’m not changing, I’m
just rearranging, my life to be with you.’

‘Yeah,’ said Izzie.
‘You should come and help the band with our lyrics. So what else did you put?’

‘Then I wrote, “Sorry
for messing you about over the last year, but now I’m ready. I know we have
something really special and I want to make a go of it. Call me.” I wanted to
keep it light, you know?’

I took a deep breath
and, as we passed a post box, I popped the card in. ‘Me and Lady Chatterley. No
old age of vain regret for us. I’ve put a first class stamp on, so he should
get it in the morning. Gulp. No going back now.’

‘It’ll be fine,’ said
TJ. ‘I think you’ll make a fab couple and we can all do loads of things
together - play tennis, go to movies, it’ll be great.’

‘OK,’ said Izzie, ‘so
that’s Lucy sorted. But there’s more to life than boys. Let’s make some other
goals for the summer holidays.’

Typical Iz. She’s
always setting herself goals and targets, then insists that we do as well. She
says it’s important to think about what you want in life, then visualise it
happening. I visualised me with Tony having a great time. My first proper
relationship. It would be top. No worrying about whether you were going to pull
or what boys were going to be where. And, did you really like him and did he
really like you? Will he phone or should you phone him?… It would be good to be
settled for a while. All of us. We could all just enjoy being with each other,
hanging out as couples and no one having to worry that anyone was on their own.

‘So?’ said Izzie,
looking at us all when we reached the bus stop. There’s no arguing with Iz when
she’s off on one of her ‘Let’s improve ourselves’ campaigns. ’Come on. Resolutions
for the summer hols?‘

‘Resolutions are for
New Year,’ said Nesta, tossing her hair back. ‘You make them on January first
then give up on them around January tenth.’

Nothing but Trouble (Chinooks #5) by Rachel Gibson
The Children of the Company by Kage Baker
Secret Pressure (Rhinestone Cowgirls Book 4) by Rhonda Lee Carver
The Visitors by Katy Newton Naas
My Earl the Spy by Audrey Harrison
The Boys of Fire and Ash by Meaghan McIsaac
Dalakis Passion 2 - Lucian's Delight by N.J. Walters
Family Matters by Barbara White Daille
Unleash the Curse: An Imnada Brotherhood Novella by Egan, Alexa
The Reapers: A Thriller-CP-7 by John Connolly