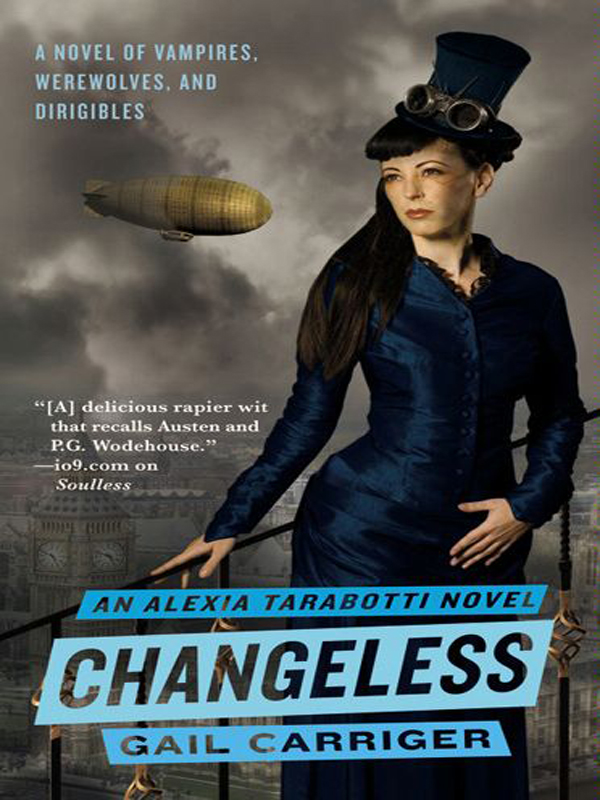 Emitting that heaviest of sighs that denotes
the gravely put-upon, Alexia Maccon rolled
herself out of bed and picked up her
nightgown from where it lay, a puddle
of frills and lace, on the stone floor.

It was one of her husband’s wedding gifts to her. Or more probably gifts to
him
, as it was made of a soft French silk and had scandalously few pleats. It was quite fashion-forward and daringly French,
and Alexia rather liked it. Conall rather liked taking it off her. Which was how it had ended up on the floor. They had negotiated
a temporal relationship with the nightgown; most of the time she was able to wear it only out of the bed. He could be very
persuasive when he put his mind, and other parts of his anatomy, to it. Lady Maccon figured she would have to get used to
sleeping in the altogether. Although there was that niggling worry that the house might catch fire and cause her to dash about
starkers in full view of all. The worry was receding slowly, for she lived with a pack of werewolves and was acclimatizing
to their constant nudity—by necessity if not preference. There was, currently, far more hairy masculinity in her life than
any Englishwoman should really have to put up with on a monthly basis. That said, half the pack was away fighting in northern
India; someday there would be even more full-moon maleness. She thought of her husband; him she had to deal with on a
daily
basis.

“Carriger debuts brilliantly with a blend of victorian romance, screwball comedy of manners and alternate history…”

Chapter One: Wherein Things Disappear, Alexia Gets Testy Over Tents, and Ivy Has an Announcement

Chapter Two: A Plague of Humanization

Chapter Four: The Proper Use of Parasols

Chapter Nine: In Which Meringues Are Annihilated

With grateful thanks to the three least-appreciated and hardest-working proselytizers of the written word: independent bookstores,
librarians, and teachers.

Wherein Things Disappear,
Alexia Gets Testy Over Tents,
and Ivy Has an Announcement

Lord Conall Maccon, Earl of Woolsey, was yelling. Loudly. This was to be expected from Lord Maccon, who was generally a loud
sort of gentleman—the ear-bleeding combination of lung capacity and a large barrel chest.

“Wasn’t me,” she immediately said, without having the barest hint of an idea as to what her husband was carrying on about.
Of course, it usually
was
her, but it would not do to fess up right away, regardless of whatever it was that had his britches in a bunch this time.
Alexia screwed her eyes shut and squirmed farther into the warmth of down-stuffed blankets. Couldn’t they argue about it later?

“What do you mean
gone
?” The bed shook slightly with the sheer volume behind Lord Maccon’s yell. The amazing thing was that he wasn’t nearly as
loud as he could be when he really put his lungs into it.

“Well, I certainly did not tell them to go,” denied Alexia into her pillow. She wondered who “they” were. Then she came about
to the realization, taking a fluffy-cottony sort of pathway to get there, that he wasn’t yelling at her but at someone else.
In their bedroom.

Unless he was yelling at himself.

Alexia’s scientific side wondered idly at the power of sound waves—hadn’t she heard of a recent Royal Society pamphlet on
the subject?

Lady Maccon sighed, rolled toward the hollering, and cracked one eyelid. Her husband’s large naked back filled her field of
vision. To see any more, she’d have to lever herself upright. Since that would probably expose her to more cold air, she declined
to lever. She did, however, observe that the sun was barely down. What was Conall doing awake and aloud so freakishly early?
For, while her husband roaring was not uncommon, its occurrence in the wee hours of late afternoon was. Inhuman decency dictated
that even Woolsey Castle’s Alpha werewolf remain quiet at this time of day.

“How wide of a radius, exactly? It canna have extended this far.”

Oh dear, his Scottish accent had put in an appearance. That never bode well for anyone.

“All over London? No?
Just
the entire Thames embankment and city center. That is simply not possible.”

This time Lady Maccon managed to discern a mild murmuring response to her husband’s latest holler. Well, she consoled herself,
at least he hadn’t gone entirely potty. But who would dare attempt to rustle up Lord Maccon in his private quarters at such
an abysmal hour? She tried once more to see over his back.
Why
did he have to be so substantial?

Alexia Maccon was known as a lady of regal bearing and not much more. Society generally considered her looks too swarthy to
give much credence despite her rank. Alexia, herself, had always believed good posture was her last best hope and was proud
to have acquired the “regal bearing” epithet. This morning, however, blankets and pillows thwarted her; she could only flounder
gracelessly up to her elbows, her backbone as limp as a noodle.

All that her Herculean effort revealed was a hint of wispy silver and a vaguely human form: Formerly Merriway.

“Oh, for goodness’ sake.” Lord Maccon seemed to be getting only more irritated. Lady Maccon knew that particular tone of voice
well—it was usually directed at her. “But there is nothing on this Earth that can
do
that.”

Formerly Merriway said something else.

“Well, have they consulted all the daylight agents?”

Alexia strained to hear. Already gifted with a low, sweet voice, the ghost was difficult to understand when she intentionally
dampened her tone. Formerly Merriway might have said, “Yes, and they have no idea either.”

The ghost seemed frightened, which caused Alexia more concern than Lord Maccon’s irritation (which was sadly frequent). Little
could frighten the already dead, with the possible exception of a preternatural. And even Alexia, soulless, was only dangerous
under very specific circumstances.

“What, no idea at all? Right.” The earl tossed his blankets aside and climbed out of bed.

Formerly Merriway gasped and shimmered about, presenting her transparent back to the completely naked man.

Alexia appreciated the courtesy, even if Lord Maccon did not. Polite to the core was poor little Merriway. Or what was left
of her core. Lady Maccon, on the other hand, was not so reticent. Her husband had a decidedly fine backside, if she did say
so herself. And she had said so, to her scandalized friend Miss Ivy Hisselpenny, on more than one occasion. It may be far
too early to be awake, but it was never too early to admire something of that caliber. The artistically pleasing body part
drifted out of view as her husband strode toward his dressing chamber.

“Where is Lyall?” he barked.

Lady Maccon tried to go back to sleep.

“What! Lyall’s gone too? Is
everyone
going to disappear on me? No, I did not send him….” A pause. “Oh yes, you are perfectly correct, I did. The pack was”—
blub blub blub
—“coming in at”—
blub, blub
—“station.”
Splash.
“Shouldn’t he have returned by now?”

Her husband was obviously washing, as periodically his bellowing was interrupted by soggy noises. Alexia strained to hear
Tunstell’s voice. Without his valet, her louder half was bound to look quite disastrously disheveled. It was never a good
idea to let the earl dress unsupervised.

“Right, well, send a claviger for him posthaste.”

At which point, Formerly Merriway’s spectral form vanished from view.

Conall reappeared in Alexia’s line of sight and gathered up his gold pocket watch from the bedside table. “Of course, they
will take it as an insult, but nothing to be done about it.”

Ha, she had been right. He was, in fact, not dressed at all but was wearing only a cloak.
No Tunstell then.

The earl seemed to remember his wife for the first time.

Conall shook Alexia gently, admiring both the tousled mound of inky hair and the artfully feigned disinterest. When his shaking
became insistent, she blinked long lashes at him.

Alexia glared at her husband out of slightly red-rimmed brown eyes. This early evening tomfoolery wouldn’t be so horrible
if he had not kept her up half the day. Not that those particular exertions had been unpleasant, simply exuberant and lengthy.

“What are you about, husband?” she inquired, her voice laced buttery-smooth with suspicion.

“All apologies, my dear.”

Lady Maccon absolutely hated it when her husband called her his “dear.” It meant he was up to something but was not going
to tell her about it.

“I must run off to the office early tonight. Some important BUR business has cropped up.” From the cloak and the fact that
his canines were showing, Alexia surmised that he literally meant run, in wolf form. Whatever was going on must need urgent
attention, indeed. Lord Maccon usually preferred to arrive at BUR in carriage, comfort, and style, not fur.

“Has it?” muttered Alexia.

The earl began to tuck the blankets about his wife. His large hands were unexpectedly gentle. Touching his preternatural spouse,
his canines disappeared. In that brief moment, he was mortal.

“Are you meeting with the Shadow Council tonight?” he asked.