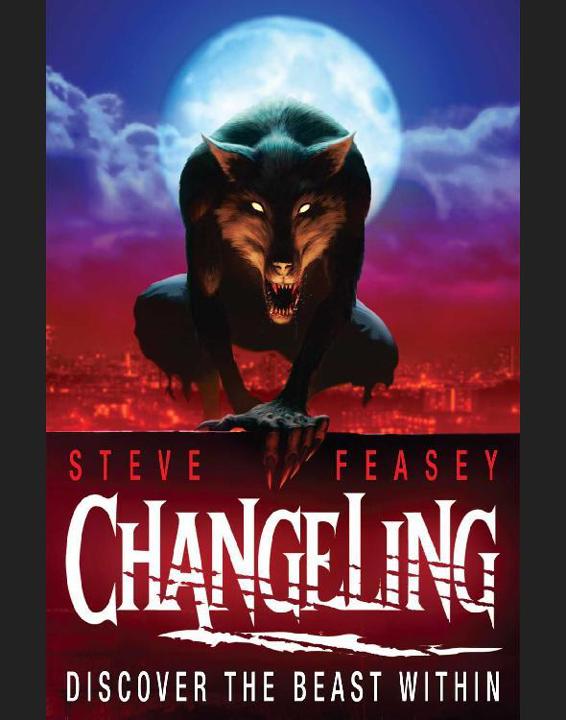 Trey felt the demon on his back and threw his entire weight against the tiled wall behind him, knocking the breath out of the nether-creature. He spun on the pads of his right foot and raked a huge, rending tear across the demon’s throat, turning his own head to try to avoid the hot fountain of black gore that spewed on to him from the demon’s already dead body.

The piercing squeal of the train’s brakes against the rails as the driver executed his emergency stop knifed through Trey’s head. He quickly looked up and saw that the people in the final carriage of the train were staring back towards him in wide-eyed horror as they glimpsed what appeared to be a giant werewolf standing on the platform of a London Underground station . . .

The right of Steve Feasey to be identified as the author of this work has been asserted by him in accordance with the Copyright, Designs and Patents Act 1988.

For Zoe, who held my hand on the roller coaster and didn’t insist that we ride the merry-go-round again.

And for my father, for all the books in the toilet. I miss you.

Trey Laporte opened his eyes, wincing against the assault of the late-morning sunshine on his retinas. Sitting up in bed, he clutched his hands to his head as a mortar shell of pain exploded inside his brain. Bright stars lit up behind his eyelids, making him feel sick to the stomach. He sank back on to his pillow with a groan and stared up at the ceiling, which shifted and swirled slightly under his scrutiny. Saliva filled his mouth again and he concentrated hard on not vomiting, wishing that these feelings would go away.

He realized that he had no recollection of going to bed last night. He struggled to remember, small, tight lines creasing his forehead as he tried to piece together what could have happened to cause him to wake up feeling like this. But there was nothing.

After dinner he’d played Pro-Evolution Soccer on the X-Box with Wayne in the common room. Wayne was his usual inept self and Trey soon got bored of thrashing the pants off him. At nine o’clock he’d called it a night and gone back to his room to listen to his MP3 player. He’d walked into the room, locked it behind him and then . . .
nothing.

He couldn’t remember a single thing from that moment onwards. It was as if someone had hit a delete button at the precise moment he’d entered his room, and erased everything from that point until now.

He lifted himself up off the pillow again. A fresh wave of nausea rolled over him, causing a hiss to escape his lips. His mouth was so dry that his swollen tongue felt sticky against the roof of his palate. He needed a drink of water. He swung his legs over the edge of the bed, his eyes shut against both the sunlight and the fireworks that detonated inside his skull whenever he moved. He was naked. This fact bothered him because he never slept naked. He fished under his pillow and pulled out his pyjama shorts. This was just too weird. Trey forced his eyes open and bent down to pull the shorts on when he saw his shoes. His favourite shoes. What the hell . . . ?

There was a sharp knock at the door.

Trey ignored the knock, and the pain, and the sickness that consumed every molecule of him. He’d saved for
weeks
to be able to afford those trainers, and now they were lying on the floor ripped apart as though someone had taken a large carving knife and slashed at them in some frenzied attack. He leaned forward to get a closer look at the mess and gasped as the rush of blood to his head caused a balloon of pain to burst behind his eyes.

‘My shoes! What the . . . ?’ His voice cracked as he tried to speak, and his throat felt painfully raw. The pain pulsated through his oesophagus in waves, and he instinctively reached up a hand to touch the flesh around his throat. He swallowed, wincing at the pain that even this simple act caused. Standing up, he desperately looked around for something to drink, and saw properly for the first time the chaos that had become his bedroom. He turned in a slow circle, his mouth hanging open in utter disbelief as he took in the destruction and disorder that was all around him.

He shivered and became aware of the cold for the first time. Looking over his shoulder, he stared at the window, which was hanging at an impossible angle from the buckled metal surround. Large gouges could be seen on the frame where the white plastic had been scored away, revealing the shiny metal underneath. The window itself was intact but appeared to have been torn away from the top hinge so that it hung outwards at a drunken incline. His eyes shifted to the wall to the side of the opening, where great rents had been made in the plaster, as if someone had taken a garden fork and raked it along the surface.

The entire room had been wrecked. His possessions – he had so few good things that he kept them tidily arranged and cared for – were scattered around the place, many broken and destroyed. His heart was slamming into his chest and he felt a sudden urge to scream out in anger. He wanted to cry. He wanted to kill someone. He wanted to find whoever had done this and –

The knock on the door was repeated, louder this time, and he turned to look in its direction. His eyes fell on the key that was still in the lock on this side. He walked over and twisted the door handle, expecting to feel the door give and open. He stepped back when it refused to budge and stared suspiciously at the white glossy surface. Reaching forward again, he took the key between his thumb and finger and slowly turned it clockwise, the lines on his forehead deepening at the sound of the bolt sliding free from the plate in the door and receding back into the body of the mechanism. He let the door open an inch or two. Turning his head, he looked over again at the window, noting that the key was still in that lock too. His heart shifted up a gear, and he looked about the room again in dismay, unable to even begin to try to piece together what had happened here. A desire to throw up came over him again.

The damage to the window looked as if it had been done from the inside . . . and yet he had been in the room asleep. Surely he would have woken up at the sound of all of this carnage going on around him.

Trey slowly turned around and went back over to the bed. He picked up his ruined trainers, ignoring the daggers of pain that stabbed at his brain, and sat on the mattress, staring down at the ripped leather-and-rubber jumble that had so recently been his prized possession – the best pair of shoes he had ever owned.

They look like some kind of dissected animals, he thought, and he was reminded of the frogs that they had been made to cut apart in a biology class, their tough outer skins sliced open and then peeled back to reveal the gory interiors. The laces that he’d spent so long getting just right – he’d rethreaded them three times so that the bars would not be twisted – were now a ruptured, shredded mess.

‘Trey?’ Colin Wallington’s voice came into the room. ‘Are you all right, Trey?’

The door was pushed open a little further and Trey heard the gasp.

Colin Wallington stepped into the room. He was a tall, skinny man with black slicked-back hair and greedy eyes that never stayed still. These, coupled with a thin, hooked nose, gave him an unkind, bird-like appearance, that had earned him the nickname of Vulture from the children in his care. He walked into the centre of the room, gawping about him in disbelief and shaking his head. He turned to stare at Trey with a look of rage.

‘What have you done here?’

‘Are you mad?’ Trey croaked. ‘I didn’t do this. Why would I do this to
my
room and
my
stuff? Look at these shoes!’ He held them up for a second before realizing that he was still completely naked. He pulled the quilt over his lower half and reached for his pyjamas again, pulling them on over his legs beneath the covers.

Trey noticed that Colin was shaking as he stood, rooted to the spot, some galvanizing current running through his entire body anchoring him in position. He was clenching and unclenching his left hand as he looked at the teenager.

Ghostwalk by Rebecca Stott
STOP AT NOTHING: 'Mark Cole is Bond's US cousin mixed with the balls out action and killing edge of Jason Bourne' Parmenion Books by Brannan, JT
The Pony Rider Boys in Texas by Patchin, Frank Gee
Freshman Year by Annameekee Hesik
Peony: A Novel of China by Buck, Pearl S.
Virus Attack by Andy Briggs
PS... You’re Mine by Alexa Riley
The Dangerous Lord by Sabrina Jeffries
Wicked Wyoming Nights by Greenwood, Leigh
Van Laven Chronicles by Tyler Chase