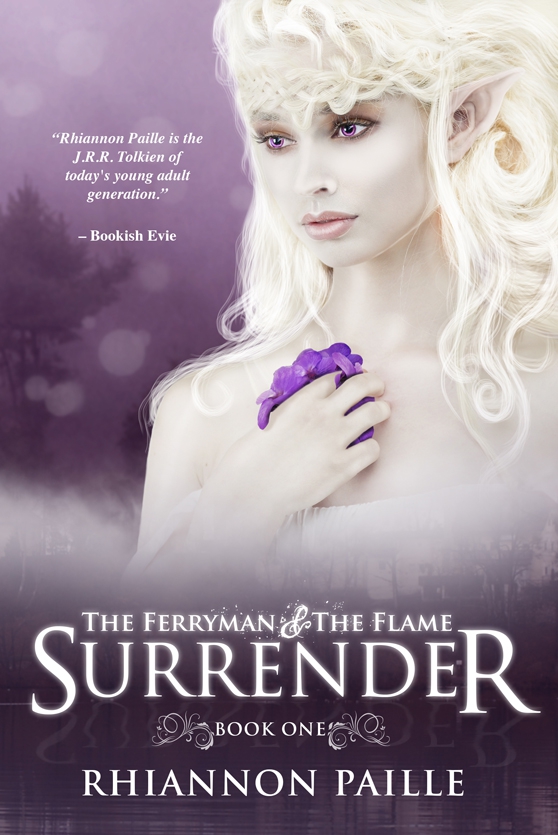 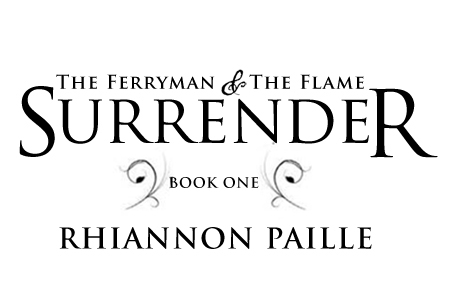 How far would you go to save everything you ever loved?

Kaliel was warned about her love for the Ferryman. One day he will marry the land and leave Avristar forever. She doesn’t listen, and because of what she is—a Flame—one of nine apocalyptic weapons, she sparks a war. In a desperate attempt to save her home and her love, Kaliel tries to awaken Avred, not knowing she may have to make the ultimate sacrifice.

“Surrender is hands down one of my favorite fantasy books ever. YA or not, this is just pure awesomeness and every fantasy fan should read it. It’s a delectable, rich in detail, numbingly brilliant and swoon-worthy read that you can’t afford to miss out on.”

“Surrender is definitely full of emotion and will take you on an incredible journey through the eyes of these two incredible characters.”

“Reading this book felt like reading a classic, but with everything I love in a book: romance, heartbreak, and lots of action! I would recommend this book to EVERYONE and then dare them not to fall in love with it!”

“Rhiannon Paille creates a unique and beautiful world that will draw you in and make you remember what it was like to be young, innocent, and full of wonder.”

Cover design by Mae I Design

WordFire Press, an imprint of

This is our story.

WordFire Press is pleased to be the new publisher of The Ferryman & The Flame series, but would like to include the author’s original acknowledgments to recognize all those who helped build this series from scratch.

I thought publishing a book was easy—until I did it. What I’ve learned about myself from publishing is that I’m a spazz case, control freak and perfectionist. I feel like most of the people I need to thank on this list I also need to apologize to, for all my author craziness.

A.P. Fuchs, Jennifer Laughran, and Natasha Heck, I have no idea how you put up with all my incessant e-mails or how you managed to encourage me to stick with it even when my whole world was a boatload of no.

Sue Dawe, I don’t know how to thank you enough for being honest with me and telling me not to Tolkienshire it up. It’s because of you that I have avoided many lawsuits.

Marc Wolfe, I don’t know what it is about your artistic vision but without it, I don’t think anyone would have gotten Kaliel and Krishani’s likeness. It’s like you took them directly out of my head and put them on paper and they look like real people, real non human people.

Primo Cardinalli and Hugh Rookwood, your illustrations were incredibly on point and accurate to the characters. I seemed to give you an idea and you ran with it, again, taking what was in my head and putting it on paper in ways I never could.

Tommy Castillo, for the painting that looked like it was something Michaelangelo painted five hundred years ago. That will always be my classic version of the Ferryman + the Flame and I don’t know how to tell you how much I will always love it.

Christopher Boll, I know you’re not a map maker anymore, but you certainly did a fantastic job on my map.

Regina Wamba, you fantastic lady you! We had a short deadline, not a lot of options, a whole lot of stubbornness on my side, and you managed to make me a cover that I can’t stop staring at, it’s sooo pretty!

Cory Putman Oakes, Evie Seo, Lucy D’Andrea, Molli Moran, Kathy Habel, Rachel Rivera, Sammie Spencer, Susan Haugland, Laura Kreitzer, Marie De La Rosa, and well the endless list of bloggers I’m forgetting to mention personally, thank you so much for your constant support and encouragement. I would have given up if it weren’t for people like you.

Rae Smith and Sabina Grosse, you two have been my little secret weapons, BETA reading well into the night and finishing my books in record time. I’m so glad I have written books that you ladies cannot put down. Thank you both for being there for me.

Lastly, you may have noticed I dedicated this book to Michael, because without him I wouldn’t be writing. 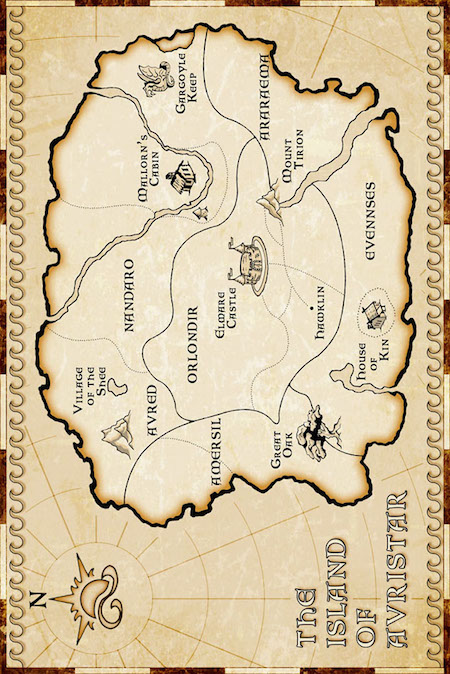 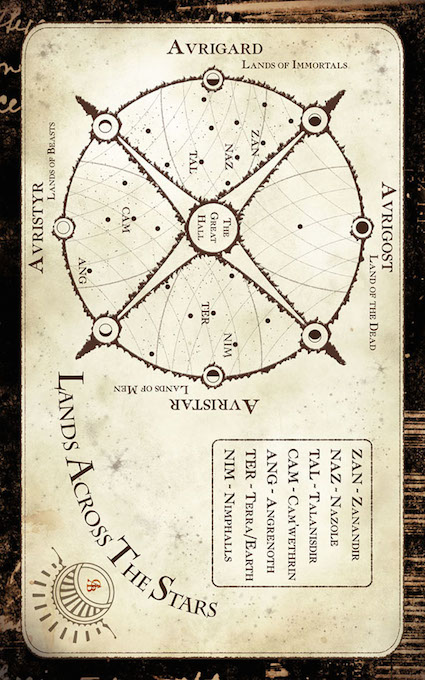 Kemplan sat in front of the fireplace watching salamanders dance among the flames. His eyelids were droopy, and he needed sleep. He drifted, then shot up, realizing he needed to add another log to the fire. He pushed off the old leather chair with the high back and waddled over to the stack of logs. He picked one up with his chubby hands, removed the gold fence surrounding the fire, and threw it on top of the other logs. The new log was instantly devoured by the flames. He smiled and turned towards his chair.

There, perched on the bottom cushion was a piece of parchment. Kemplan glanced into the skies of the library, the ceiling too high to see due to the shadows collecting above him. Kemplan gawked at the parchment. Never in all his time had a page appeared like that. He waddled over to the chair and delicately grasped the parchment.

He turned it over and inspected at the images before him. A Ferryman perched on a throne, wearing the royal colors of black and gold—across from him—a Flame. They gazed upon each other with a look that meant one thing—soul mates. Kemplan blinked and shook his head. He wanted to shove the parchment back into the high shelf it had come from. Memories clouded his mind as he revisited the past he barely survived. He nervously cleared his throat, clenched his fist. There weren’t many things in the Great Library that were forbidden, but this was one of them.

Kemplan dared a peek at it in the hopes he had been hallucinating, but the parchment was unchanged. The sun showered them in golden beams of light. Two ankhs, shaped like crosses with hoops at the top, hung at the edges of the beams of light, a symbol of their importance to the Lands Across the Stars. Kemplan knew which Ferryman and which Flame these were, the only two that had ever met, Krishani Mekallow Mekelle of Terra, and Kaliel, The Amethyst Flame, her name burned into her very soul by the enemies she defeated.

Kemplan scoffed and threw the parchment on the chair. He paced the small embroidered rug, wringing his hands out. He was afraid to look at it anymore, afraid of what horrendous things would prick his mind. He balled up his fists; glancing at the parchment each time he turned.

After a few paces stared the parchment down, crossed the floor, seized it, and tossed it into the fire. He tried not to watch as the flames licked away the edges of it. He knew it wouldn’t burn easily.

Kemplan expected to find it devoured, but instead he was met with staggering symbols that appeared overtop of the images. His stomach lurched, the message too blatant to mistake—infinity. He fell on his back and mouthed the word ‘no’. Scrambling backwards, he tried to put as much distance between himself and that vile thing defying the fire.

A deafening screech erupted from the fireplace and Kemplan instinctively brought his hands to his ears, trying to dull the sound. He closed his eyes seeing nothing but fire. He wanted to escape the past but memories came on hot and strong. As he blinked he saw a flash of his wife, charred. He begged not to see the images of his children, his house, his life, but whether he recalled them or not, they were emblazoned on his mind.

He would never forget.

He let out a gasp and looked at the fireplace. It crackled like it was about to explode. He rolled over and squeezed his eyes shut. Chaos. His life had become nothing but chaos. He let out a whimper as crippling sadness rippled through him. He could never have that life back. He would always be trapped in the Great Library, and it would always be their fault.

He closed his eyes, trying to force the images away. He remembered the words of High King Tor, ‘It was said long ago that one of the Flames would fulfill a great prophecy.’

Kemplan snarled. Precious but dangerous, the Flames were never to be trusted. Life was better when they were hidden. He couldn’t believe High King Tor would return them to the Lands Across the Stars—especially not her, The Amethyst Flame. And yet the parchment was clear, Kaliel would return, as would the Ferryman, and no doubt by some grand accident they would meet.

He gritted his teeth and waited for the fire to explode, hoping it would erase him from existence for good. A dead calm washed through the Great Library as darkness covered him. Smoke rose from the fireplace and Kemplan sat up. He pawed through the smoke to where the parchment was, glowing, unburned. He stifled his disgust but his heart dropped, the symbol for the Isle of Avristar appearing overtop of the infinity symbol.

And so it begins,
he thought bitterly.

This is the legend of The Ferryman and the Flame.