Read Charlotte: The Practical Education of a Distressed Gentlewoman Online

Charlotte: The Practical Education of a Distressed Gentlewoman 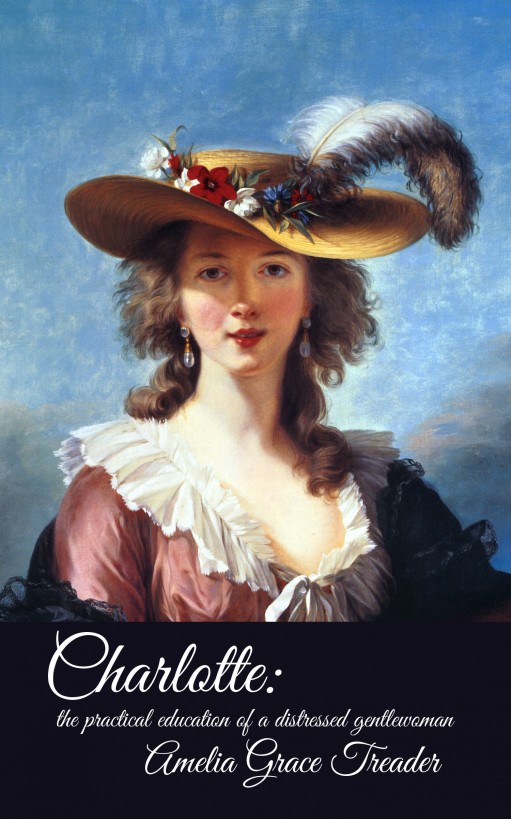 the practical education
of a distressed gentlewoman.

This is a work of fiction. Names,
characters, places, and incidents are either products of the
author’s deranged imagination or, if real, are used
fictitiously.

No part of this book may be
reproduced or transmitted in any form or by any means, electronic
or mechanical, without written permission from the author, except
for the use of brief quotations in a review.

For my loving helpmate, and my
adorable children.

Table of contents
1. An Unfortunate Sequence of Events

Gout and dropsy
plagued old Lord Staverton's last years, but it was the pneumonia
he caught during the hard winter of 1813-14 that finally carried
him off. A hardened gamester, he had left his estates encumbered
with so much mortgage debt that the income barely covered the
interest payments. His son and heir, John had similar expensive
tastes in entertainment, and as a captain in the army of occupation
in Paris had many chances to indulge them. His daughter Charlotte
secretly yearned for the chance to experience the exciting life of
the ton in London, but was by far the most level headed of the last
of the De Vere's and merely hoped to keep clearing housekeeping. No
sooner had his vicar and somewhat more sober crony from the old
days, Dr. Answorth buried him in the churchyard than an express
bearing bad news arrived from Paris.

John enjoyed the night life in
Paris after Napoleon fled to Elba. He and his brother officers
sought release from their memories of the real dangers and
hardships of the Spanish campaign with the thrills of gambling,
drinking and whoring late into the morning. His particular road to
perdition was the dice box. In a desperate attempt to clear himself
from his debts, he threw double or nothing hoping to sum more than
double threes. He threw snake-eyes. Left with fifty thousand pounds
of debt and no way to pay it, he quaffed his last glass of
champagne then headed upstairs do to 'the honorable thing' in his
room. The gamblers below hardly noticed the bang when he blew his
brains out.

A few days later the family
solicitor, Mr. Cruise, gathered Miss Charlotte De Vere and her
friends Dr. Answorth and Mrs. Answorth together to read the will
and decide what to do with the estate. The situation was
dire.

“
Miss De Vere, your father's
estate was severely encumbered, and your brother John's debts were
the last straw. I'm afraid you will have to sell Staverton Hall,
its contents and grounds. As you know, the London house went years
ago. Maybe we can keep some of your mother's jewels.”

“
Surely my mother's portion should
come to me. I can live on that.”

“
Yes it should, but the interest
on ten thousand pounds is hardly sufficient for the costs of the
estate. To be blunt, even if we sell the Hall and grounds at a very
favorable price there may not be enough of the proceeds left over
to cover the portion due you.”

Charlotte gasped, “Surely there is
something left for me.”

“
I'm sorry but until the estate is
fully settled, there is nothing for you. I could give you five
thousand pounds in return for your signing your portion over to me
when it is finally settled. I'm confident that the settlement will
not be much higher.”

Dr. Answorth hardly needed the
prodding his wife and helpmate gave him to speak. “No! None of
this, Charlotte should get her full share or as much of that as is
possible. Miss De Vere, you can stay with us while this is sorted
out. At the vicarage. I mean. Your father helped with my preferment
and I am glad to repay the favor.”

Mrs. Answorth continued in a more
coherent manner. “Miss De Vere, you know we've never had children
and the rectory is so big. Dr. Answorth and I just rattle around in
it. It would be a great favor if you'd come and stay with us. We'd
like to have the company of young people again.”

Charlotte started to refuse, then
realized that there was no way to refuse without hurting her
friends. “I – I couldn't impose on you, but if you insist, I'd be
happy to stay at the vicarage.”

Mrs. Answorth clapped her hands
with joy. “Then it's settled, you'll move in with us. We'll make a
happy family while you sell the hall. Then we can see what fortune
awaits.”

A few days later Mrs. Answorth
looked exhausted in the morning at breakfast. “It's Dr. Answorth.
He's caught a chill again and I was up all night nursing
him.”

Charlotte inquired after his
health.

“
It's not bad, but he sinks so low
when he is ill. Unfortunately, I am promised to visit with the old
widow Mrs. Chatsworth this morning.”

“
If it's not an imposition. I
don't want to make you a drudge Miss Charlotte.”

“
No it's not. I need the walk. Is
there anything I should bring her?”

“
Just your company. Her son looks
after her wants, but she's housebound and gets so lonely. She used
to be able to make it to church on Sundays, but recently even
that's become too difficult for her, poor thing.”

Charlotte went back upstairs to her
room and changed from her delicate muslins into the coarse woolen
dress she wore when she went rambling about the countryside. As she
descended, Mrs Answorth remarked, “You look just like a farmer's
daughter, Miss Charlotte. Shouldn't I send for the carriage and
have you dress as befits your station?”

“
My station? The daughter of a
profligate old gambler who spent us into the poorhouse. No I've had
enough of these airs. Besides, this way I can wander about for the
exercise after I've visited her.”

“
Surely Mrs. Chatsworth will
appreciate my company, even if I dress like this.” She looked at
the weather when she left the vicarage. It looked from the clouds
like the weather were likely to change, but the morning promised to
remain fair.

The Chatsworth farm was a few miles
away from the vicarage, but the weather held clear and Charlotte
made good time. She was nearly there when a young man in a curricle
pulled up beside her and stopped. He was dressed in the latest
London fashion with a tall almost conical hat with a curled brim,
stiff collars so high that he could only turn his head with
difficulty, a tie whose mathematical excellence required an hour in
the morning to achieve and a traveling cloak with several layers
and buttons as wide as his hands. His horses were showy horses that
had been advertised as 'fifteen miles an hour tits'. Charlotte
looked at them with dismay, they may have been showy, but they were
in poor condition and exhausted. If they did fifteen miles an hour,
it was only for a few minutes at a time. The man's groom evidently
agreed and met her glance by looking away in shame.

“
I say, countrywoman, is this the
way to Staverton Hall? The directions they gave at the pub in the
village were so confusing. This road is so small and muddy, I'm
sure we must be lost.” The road was one of the better ones in the
district.

“
I'm thinking of buying it, but my
old man told me to always inspect the goods before laying out my
blunt. He is a canny one he is. So before I offer, I want to see
it.”

“
Oh. Well, yes. You're on the
right path. It's a mile past the next farm, on the right. Though
you might want to return by the main road. Go out the front gate
and you can't miss it.”

“
Well, that's simple, and we
should be able to find our way. Thank you. Just to show that
Frederick Talbot isn't a welsher, here's this.” He tossed her a
shilling, then hied his horses and drove off.

Charlotte fumed, all the way to
Mrs. Chatsworth's. “What a mushroom, a bobbing block and a fool, I
hope he doesn't buy my hall.”

Mrs. Chatsworth was overwhelmed at
first by her visitor, the daughter of the lord of the manor, and
last of the De Vere's. Charlotte did her best to reassure the old
woman that she was merely human, filling in for Mrs. Answorth, and
in the end, after an hour or so of conversation she
departed.

Charlotte climbed the down to see
her beloved home, so soon to become the abode of someone else.
Possibly even that detestable mushroom she'd met on the road. She
shuddered at the thought, then turned and started towards the main
road to make a loop out of her walk. The weather, which had started
so clement began to darken with the threat of rain. The threat
became real as a steady drizzle began to soak down.

The noise of a curricle approaching
from behind interrupted her reverie. That young man was driving
past her again. She forced herself to look away. It didn't help. He
stopped and asked her, “Countrywoman, since you were so helpful and
it is starting to rain, would you like a ride to the village? I
have to find that blasted solicitor.”

The raindrops coming both larger
and more frequently forced Charlotte to accept. With the help of
the groom, she mounted the curricle. The man introduced himself,
“I'm Freddy Talbot. My father saved up the readies and wants me to
find a suitable country estate for the family. I've been looking
for one for the last two years. It seems like forever. Finally,
found it.”

Charlotte looked away, both in
shame and shyness. Freddy muttered “Suit yourself,” to himself and
urged his pair onwards. After a few moments he shot a glance at his
fair companion. She was uncommonly good looking, not at all what he
expected a farm woman to look like, and yet, somehow she looked
familiar. He thought for a moment then realized he'd seen her
portrait at the hall.

Charlotte reluctantly admitted that
was true.

“
Visiting an elderly neighbor who
needed the company.”

“
Ah, the
noblesse oblige
. I
guess I might have to learn to do that.”

“
No, usually Mrs. Answorth visits
her. She couldn't do it today so I did.” Charlotte looked away.
This conversation was over as far as she was concerned. Closer
acquaintance hadn't improved her opinion of Mr. Talbot. Freddy, in
his usual style, didn't understand subtle messages. He turned to
her and asked, “Why are you selling? It's a spanking place, just
what the doctor ordered.”

Unfortunately Freddy should have
concentrated on his driving. He wasn't a good enough driver to let
his concentration lapse, no matter how charming its object. His
leads got caught in the near horse's feet, then wrapped around the
right axle of his curricle. In a moment, the horse stumbled, the
thill snapped and the curricle pitched sideways dumping him and his
fair passenger into a tangled heap in the mud and slough on the
side of the road. After a few physical intimacies that went well
beyond the normal bounds of social etiquette, Charlotte and Freddy
managed to disentangle themselves and stood by the side of the
road.

Not on Our Watch by Don Cheadle, John Prendergast
The Dead Place by Stephen Booth
And the Hippos Were Boiled in their Tanks by William S. Burroughs and Jack Kerouac
Shadowrealm by Kemp, Paul S.
By Force by Hubbard, Sara
Time of Death by James Craig
Lust Or No Harm Done by Geoff Ryman
Framley Parsonage by Anthony Trollope
She's With Me by Vanessa Cardui
Peace Army by Steven L. Hawk