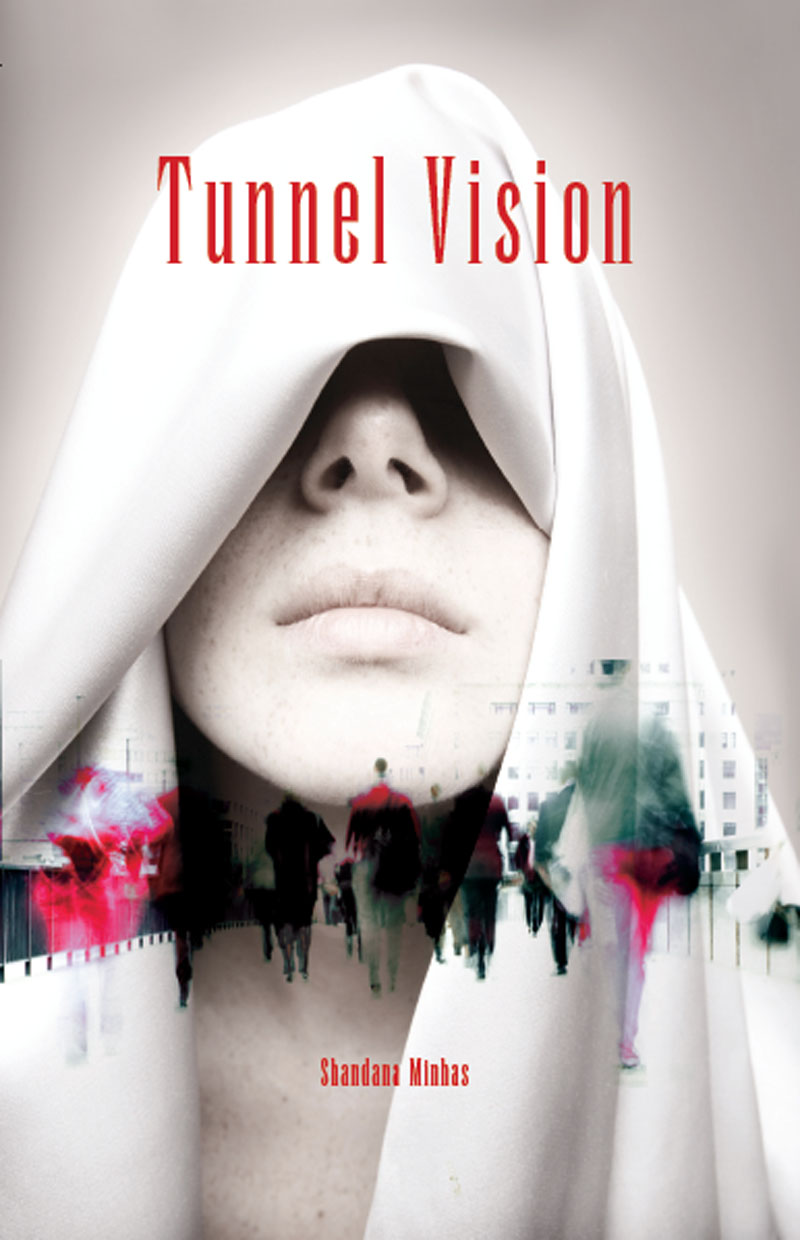 Ayesha Siddiqui, 31 and independent, has just proposed to the man she loves. His silence makes her crash through the windshield of her car. In her comatose state, Ayesha floats between Time Past and Time Present. The narrative meanders through Ayesha
'
s life, throwing up startling facts about her immediate family, relatives and friends. It brings to the fore her anguish, her love-hate relationship with her mother and her failed relationships with men, as she struggles to survive and build a career and an identity in a male-dominated society. The story is set against the backdrop of Karachi - a city where the past, present and future battle it out on billboards, TV and the backs of rickshaws. The throes of flux, fluidity and transition being witnessed by the country provide a parallel to Ayesha
'
s own angst.

Shandana Minhas writes regularly for local publications and web sites and has scripted and produced short films and documentaries. Her novella
Rafina
is being adapted into an international feature film.
Tunnel Vision
is her first novel.

This digital edition published in 2015

All rights reserved.
This is a work of fiction. Names, characters, places and incidents are either the product of the author
'
s imagination or are used fictitiously and any resemblance to any actual persons, living or dead, events or locales is entirely coincidental.

No part of this publication may be reproduced, transmitted, or stored in a retrieval system, in any form or by any means, whether electronic, mechanical, print reproduction, recording or otherwise, without the prior permission of Roli Books. Any unauthorized distribution of this e-book may be considered a direct infringement of copyright and those responsible may be liable in law accordingly.

All rights reserved.
This e-book is sold subject to the condition that it shall not, by way of trade or otherwise, be lent, resold, hired out, or otherwise circulated, without the publisher
'
s prior consent, in any form or cover other than that in which it is published.

K
arachi snarled as I sped down its streets, its walls hurling obscenities, its lanes and side roads lifting me up only to drop me again, its phallic monuments mocking me, reminding me I had always been and would always be just a woman in a man
'
s world. I ignored the cacophony of insults and comments that came to me on the breeze through the open window of my green Alto, turned away from the man urinating openly by the roadside as a woman passing drew her dupatta even more tightly around her head, but the metropolis had infinite cards up its sleeve. If I wasn
'
t willing to admit I was fully marinated and ready for cooking, it decided, there were other ways to show me what my life in it was all about. And so it struck.

Very few people choose to go head first through a windshield. I know I didn
'
t. When I fled from Saad
'
s infuriating calm into my car and sought the madness of the roads, thinking their chaos would be balm to my troubled soul, going through the windshield was the very last thing on my mind. My immediate problem was how to avoid crying. Ignoring the imperatives of why and where, I headed straight for Shara-e-Faisal. I didn
'
t really have any friends, and it was the road that had always comforted me. It cut through the city
'
s grime like an alcohol swab across a wound, made it possible even for a hardboiled Karachi egg like me to imagine we truly were as modern, progressive and sophisticated as we claimed to be. If we weren
'
t, then there really wasn
'
t any hope for me, and I needed to believe that there was.

But that day even the sight of the Finance and Trade Centre didn
'
t do it for me. So what if it had an auditorium? So what if there was a bustling theatre scene? So what if the size and splendour of the billboards dotting that stretch of the road rivalled anything I
'
d seen in other cities across the globe? Some idiot had recently seen fit to position a flyover right across that particular intersection, and the debris of its construction still littered the side of the road. Its concrete legs seemed strangely naked, vulgar almost, in a culture unused to nudity. And right across from the FTC, Gora Qabristan seemed to chuckle quietly to itself. Gora Qabristan, white man
'
s cemetery. Still named after the days of the Raj despite the decades since Partition, reducing the Christians amongst us to their proper rank, nameless, invisible, unimportant, unless white.

Depressed as I was, I certainly wasn
'
t planning to up and kill myself, or let someone else kill me.

I blame the tears. If my vision hadn
'
t been blurred, my nose not red and bulbous, my hands on the steering wheel not clenched like the talons of a shrivelled predator, maybe the accident wouldn
'
t have happened. Then again, maybe it was simply meant to be. No doubt bored by my petty love problems, sick of all the oppressed South Asian women forever cursing their lot, God in his infinite wisdom had thought it best to point out the downside of the
â
whatever must be will be
'
platitude we tended to offer up in the face of failure, whatever the real reason might be.
God
'
s will?
He must have muttered to himself,
I
'
ll give you God
'
s will â¦

The accident wasn
'
t my fault. Honest. The only thing I had done wrong (in the last fifteen minutes anyway) was pull up at a red light with the sniffles. Okay, I was driving fast, but what sane person in Karachi didn
'
t? There was a water tanker ahead of me in line at the traffic light. It had a pink eagle on the back, hovering over the couplet
â
Karachi ki aurat kamzor nahin, Karachi kay murd main zor nahin.
'
Truck art at its most garish, and possibly perceptive. If I had been a European tourist, maybe I would have clapped my hands in delight, but I wasn
'
t. I was in fact one of those very Karachi women who couldn
'
t be called weak, not by anyone who valued their self-respect anyway, but that rhyme â summarizing as it did my place in the cosmic pecking order after the events of that morning â the rhyme pushed me from sniffles to fullblown sobs.

So there I sat, howling behind the wheel of a car practically rammed up the backside of a bubblegum pink water tanker, no doubt, driven by a drug-addicted, STD-ridden, child-molesting thug (stereotypes were offensive only when applied to me), when a speeding Corolla drove into the back of my stationary Alto and propelled me through its windshield. Everything went black. Or a very dark shade of purple, to be more precise. And thus began a day in the life of Ayesha Siddiqui, 31, of 42 D, Street 7, Hussain D
'
Silva Town, North Nazimabad, Karachi.

WHO DO YOU TRUST?

W
hen I came to I was floating above the body of a woman protruding from the windshield of a green Alto, sprawled face down on its tiny bonnet in a slowly expanding pool of red, a human magnet drawing bodies to it in a rapidly swelling crowd. My first thought was
â
so this is what kestrels do all day
'
. My second was
â
that
'
s me
'
, and my third,
â
why isn
'
t anyone helping me?
'
On the innermost fringes of the seemingly petrified multitude was a burly man with paan-stained teeth attempting to comfort a distraught city slicker with his hands-free earpiece still dangling over his shoulder.The driver of the killer car? The manicured hand on the death wheel? This was the instrument of God
'
s will? I wanted him to be better-looking, more along the lines of
â
it would take nothing less than an Adonis to fell Ayesha
'
.
The other I assumed was the tanker driver, partly because his hand on the yuppie
'
s shoulder and the filthy young cleaner glowering at them both from his vantage point on the top of the tanker, fit right into my trucker scum theory.

The boy and I really had the best seats in the house. That being said, I wouldn
'
t have minded trading mine. The crowd was pressing inch by inch closer to the wreck, and me on it. The meeting point of Sangster road, Shara-e-Faisal and Korangi road traffic next to the FTC was an acknowledged death trap, especially after that
nanga
bridge had reduced visibility to a minimum. Typical. Make the big gesture, ignore the little details. I should have been more alert.

Most of the men in the crowd were probably professional gawkers, lured to that point at least once a week to watch someone else
'
s suffering etched in plasma, metal and glass on the unforgiving canvas of the road. Karachi
'
s version of popular art, right up there with trucks and rickshaws and their musings on mortality, love and women. It shouldn
'
t have been surprising to me that everyone was watching but no one was helping. Also typical. Everyone was a critic, no one a doer. Those two yakking in the front row were probably discussing whether my right arm was positioned right. There I was, helpless, bleeding, in need. And the mob around me still waited for its cue.

A middle-aged man finally pushed his way through and approached me. I watched him raise my hand, hesitantly, as if even now that mythic Karachi woman might object to his familiarity and rise from her death bonnet to slap him. He straightened and asked loudly for someone to help him move me to a car so I could be taken to a hospital. And then came the words, the voice of the mob, the distinctive yap of the human mongrel that placed supposed honour over human suffering,
â
but she
'
s a woman! We can
'
t touch her.
'
Unless, of course, no one was looking.

This time I pushed off myself, away from the rapidly diminishing tug of gravity and towards the realm of pigeons, crows, kestrels and blimps celebrating the rise of the Islamic bomb. If this was reality, I wanted a divorce.

The last thing I noticed before turning away, forever I thought, from the scene of my demise was a hijra coming forward to help the man move me, pushing my hair behind my bloody ear before lifting me effortlessly and crooning
â
there there doll, your sister
'
s here
'
.

The whole time, I didn
'
t once think of Saad.

B
ut as I slept, Saad crept unnoticed back into my thoughts like the stealthy new-age virus that he was. When I rose from perfect stillness to hover over the gurney on which my body was being wheeled through the aged, distressed, swing doors of a hospital
'
s emergency section, there he was again. Saad. Saad Saad Saad Saad. If I died, as I heard one nurse remarking I was sure to, would he be sad Saad? And if it became common knowledge that he was indirectly responsible for my little tangle with the tinkly glass, would he be bad Saad? Probably not. Convinced, as she was, that any man willingly involved with a woman like me was either an idiot or a saint, my mother was sure to feel nothing but compassion for him either way.
â
Poor Saad
'
, she
'
d say to my brother,
â
see how inconsiderate your sister was of him, upsetting him by dying like that?
'