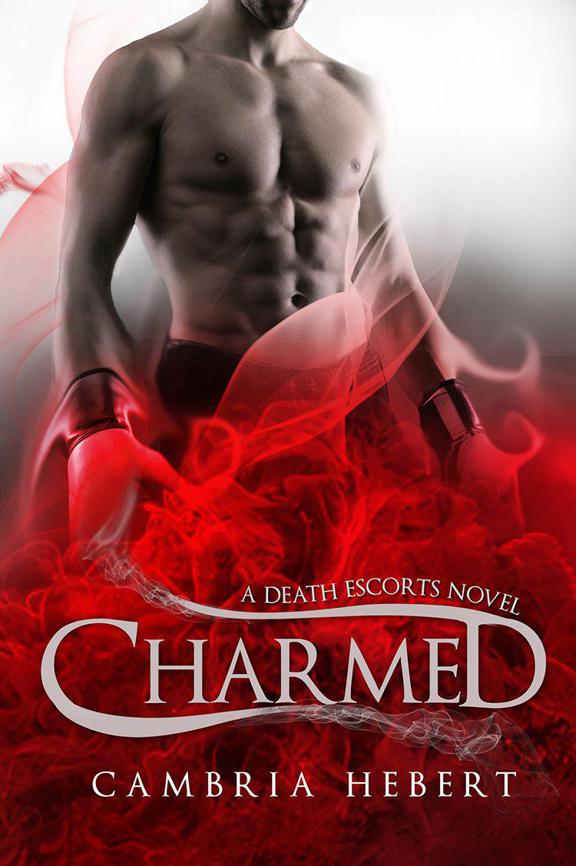 All rights reserved, including the right to reproduce this book, or portions thereof, in any form without written permission except for the use of brief quotations embodied in critical articles and reviews.

Cover design by MAE I DESIGN

This is a work of fiction. Names, characters, places, and incidents either are the product of the author’s imagination or are used fictitiously, and any resemblance to actual persons, living or dead, business establishments, events, or locales, is entirely coincidental.

Other books by Cambria Hebert

To anyone who’s ever been charmed.

“I’m selfish, impatient, and a little insecure. I make mistakes,

I am out of control, and at times hard to handle,

but if you can’t handle me at my worst,

then you sure as hell don’t deserve me at my best.”

“Boxing -
the act, activity, or sport of fighting with the fists, especially according to rules requiring the use of boxing gloves and limiting legal blows to those striking above the waist and on the front or sides of the opponent.”

The moment when the course of your life will be defined forever.

I was in that moment.

The pungent odor of sweat and adrenaline permeated the air around me. The crowd, sizeable and energized, bellowed. It was an all-encompassing sound, the many individual voices creating a singular roar that echoed through the warehouse we occupied.

In just a few moments, my life was going to change forever. And damn, it was going to be sweet. Everyone here was going to know my name. After tonight they would say it with reverence, with awe. I would go down in the history books as the unknown scrapper who literally fought his way to the top and beat out the reigning champion.

The managers I couldn’t get, the representatives who looked at me and sneered, were going to eat every last
you’ll never make it
they ever said. I felt a few gazes from across the room and I glanced their way. They were from the reigning champ’s camp. They looked at me with a mix of surprise and disbelief—like they still couldn’t figure out how I made it this far without anyone to help me.

I jerked my chin in acknowledgement of their stare, and their looks changed.

To arrogance, to pity.

I rolled my head on my shoulders, enjoying the sound of the cracks and pops in my muscles. The arrogance, that was to be expected, but the pity… that was something else entirely. It was fuel. Fuel to my fire, fuel to succeed. They thought I was going to get my ass beat in front of a sold-out crowd, in front of anyone who mattered in the boxing world.

The announcer stepped into the ring, ducking between the ropes and straightening to his full height—which was still a full head shorter than me—and began to introduce the reigning king of boxing and then me, the unexpected, no name challenger.

I didn’t bother to listen. Instead, I made sure the laces on my gloves were tight. I concentrated on the familiar rush of power into my limbs and I called up an image in my head, the reason I did any of this at all.

The crowd roared as the champ took his place in the ring. As I walked to my place, I picked out a few voices in the onslaught of noise. They were betting against me. Wagering I wouldn’t make it past round one. Without thinking, I stopped my steady progress to the ring, halted where I stood and then pivoted back around. A hush fell over the crowd; they waited to see what I would do… if I was going to chicken out and leave without trying.

I walked to where the men were betting against me. They looked up, one of them visibly swallowing.

“Add me to that roster,” I told the man with the paper and pencil.

“I want to place a bet.” I said it extra slow like he was stupid.

“My money isn’t good enough?” I lifted a single brow.

“I’ll win in the third round. A complete knockout.”

There were gasps all around me.

“Are you sure you want to do that, kid?” the man with the pencil asked.

His eyes bulged. “That’s a lot of money…”

“I’m a sure thing,” I replied and turned around to walk away.

Someone behind me laughed. “That kid has balls.”

The murmurs of “what’s his name again?” did not escape my ears.

I climbed in the ring, my eyes going directly to my opponent’s corner. He sat there with his team around him and a white towel draped over his shoulder. I made it a point to meet his eyes. I did it every fight. I wanted whoever I fought that night to know that I wasn’t intimidated by their backers, their titles, and their name.

I was here to take it all away.

The clamor of a bell signaled the start of the match. We came out of our corners, circling each other a few times, sizing each other up, looking for weaknesses, for patterns, for anything that might give us the edge.

He threw the first punch. I dodged it; spinning away and then coming right back. He threw another and I blocked it, hitting away his glove like it was a gnat and I was annoyed.

The more blows I blocked, the more flustered he became. Halfway through the first round and I hadn’t even taken a shot. I hadn’t been hit either.

He drew back to attempt another shot when I struck out, the uppercut snapping his head on his shoulders. The crowd went nuts as he stumbled back.

His eyes locked on mine and like a freight train he came at me, knocking into me, back against the ropes, and I used their momentum to push him backward and hit him again.

After that, the fight got real. Fast.

I took several slams that made my vision go blurry, but I stayed on my feet and delivered a few vision robbers of my own. By the end of the second round, we were both breathing heavy, pouring sweat, and bleeding. I fumbled around with the water in my corner, trying to get it in my mouth. It was hard with gloves on and no one to help me.

Someone appeared next to me, standing outside the ring. He grabbed the water and squirted it in my face. I opened my mouth automatically to get some of the cool liquid.

“That’s some good fighting, kid,” the man said. “You just might win.”

I glanced at my helper, not really seeing him because everything was blurry. All I knew was that he wasn’t that big and he had dark hair. “Thanks,” I said, opening my mouth for more water.

“The other side looks pissed. Word is they got a lot riding on this fight. They thought it was going to be cake. You’re making it harder.”

The announcer called out and I turned back.

“Keep an eye out, kid,” the man behind me whispered. “Some people like to win dirty.”

I didn’t really hear his words because the bell rang and we moved out of our corners. My eyes went to my opponent’s. There was a glint in them that hadn’t been there before. A sort of clarity that could only come from confidence.

I shot my fist out to wipe the look off his face. He dodged me.

We locked arms, our upper bodies colliding as we tried to muscle the other toward the ground. “Give it up, kid,” the guy whispered. “I’m not giving up this title.”

I shoved my fist into his ribs and the crowd roared.

He collapsed a little farther against me, my body taking on more of his weight. “Give up now, or else.”

I wanted to laugh, would have if I wasn’t busy punching him again.

This time he fell over onto the floor. I bounced from foot to foot, waiting for him to pick himself up.

He lifted onto his hands and knees, his back heaving with heavy breaths.

Everything seemed to slow down then—like in a car accident when you know you’re about to die and every last second is painfully drawn out so you know exactly what is about to happen.

My opponent glanced to his corner. His handler nodded once and then slid his cold eyes to me. The boxer got up and turned, looking at me with a hard expression. I saw his glove coming, but I didn’t move fast enough. It hit me square in the face and I fell back, down onto my butt.

The guy was on me then, straddling my waist and hammering his glove into my face. My vision went dark. I’d taken thousands of hits like that before and not one of them ever took away my vision.

His glove. It was weighted.

He hit me again and warmth rushed from my nose. He must have put on a new glove, one with brass sewn inside. He was dirty.

I tried to get up, to hit him again.

“I told you I wasn’t going to lose,” the man rasped.

I heard the ref calling out for him to get off me, that he was supposed to back off. I heard the hush that fell over the crowd.

I looked up at him. He saw it in my eyes.

I wasn’t giving up. This title, the money that came with it, was mine.

He reared back one last time, the ref screaming for him to stop.

He drove his glove into my face, up under my nose, driving the bones straight into my brain.

I collapsed beneath him.

As life faded from my limbs, a single flicker of emotion was felt.

For her. She needed me and I failed. What would happen to her now?

Death swallowed me then, taking what was left of my thoughts, my life. Turns out the moment in which my life was defined forever was not what I expected.

In fact, it seemed that my life was now defined by death.

Red.
It’s all I could see. It was all around me, everywhere. At this rate I wouldn’t have one drop of blood left in my body. How long did it take someone to bleed out? How long until their organs, their heart had nothing left to fuel them? A minute? Five?

What I couldn’t understand is why I wasn’t in pain. Surely with this much blood pouring out of my skin I would feel some kind of raw pain. But there was nothing.

Why was it suddenly so quiet? I could hear nothing—not even the sound of my own breathing. Then I realized. The hush in the air was because everyone was watching me die. They were likely wondering the same thing I had been moments before:
How long?
I needed to get up, to prove to them that I wasn’t going down like this. I wasn’t going to die in a fight I should have won—a fight that was rightfully mine.

Before the Larkspur Blooms by Caroline Fyffe
The Coal War by Upton Sinclair
Drop Everything Now by Thomas, Alessandra
Hiding Jessica by Alicia Scott
The Beetle Leg by John Hawkes
Training Tess by Sabrina York
Rogue Angel 51: The Pretender's Gambit by Alex Archer
Ever Onward by Wayne Mee
Under Fishbone Clouds by Sam Meekings
The Better Mother by Jen Sookfong Lee