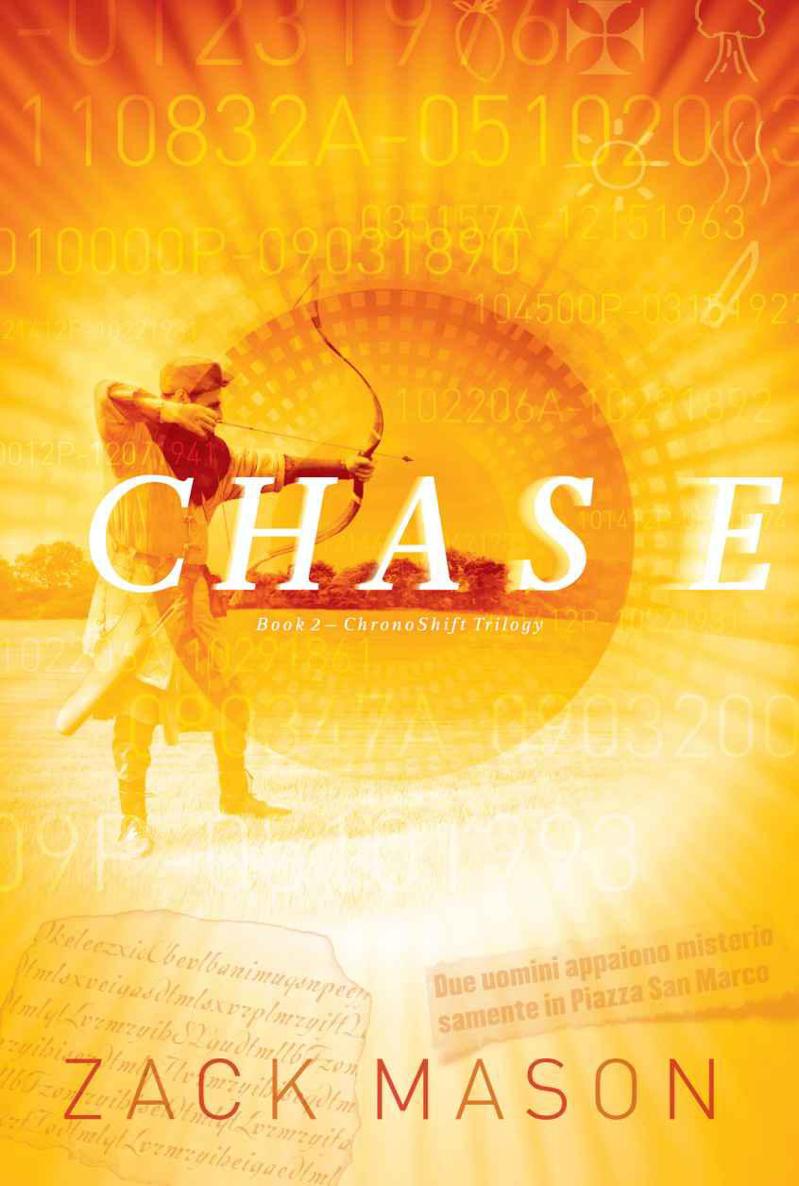 Chase
is a work of fiction.  All names and places are either products of the author's imagination or are used fictitiously.

All rights reserved under International and Pan-American Copyright Conventions.  Published in the United States by Dogwood Publishing, a division of More Than Books, Inc., Georgia.

Library of Congress Cataloging-in-Publication Data is available upon request from the publisher.

Manufactured in the United States of America.

the Creator of Time and Author of all Adventure

who first inspired me with

a sense of the history around us.

Chase
is the second part of a three-part story that could not be told in one volume. If you have not yet read
Shift
, you may wish to do so before proceeding.

(Book I of the ChronoShift Trilogy)

The family of the drunken teenager driver who killed them sues Mark for everything he owns and Mark's wife, Kelly, abandons him.

Mark turns his back on society and loses himself in the North GA mountains to live off the land.

While wandering, Mark discovers an empty shed in the middle of the woods.  Inside, are several watches — time-travel devices that latch onto the wearer's wrist and can only be removed at death.

With the watch, which Mark calls a
shifter
, he can jump through time at will.  He uses the shifter to acquire billions of dollars in a matter of months.

Mark returns to the day of the wreck to save his kids, but a strange and powerful force firmly prevents him from stopping the accident, no matter what he tries, and he is devastated.

A mysterious stranger, who also bears a shifter, recruits Mark to embark on certain time-travel "missions" for a company called ChronoShift.  His name is Hardy Phillips.

Alone, Mark uses his shifter to fight crime and tragedy on his own.  He hires Savannah Stanford to do historical research and builds himself a time-travel "armory."

Mark travels back in time and recruits younger versions of Hardy and Ty from the U.S. military before the two men have ever heard of time shifters.  Mark gives them his two extra watches.  Together, they form a new company and name it ChronoShift.  It is unclear who actually hired who.

Later, Mark saves Laura Kingsley, an exotic dancer, from a violent assault.  He becomes infatuated with her, and they date.

Laura is only interested in material gains.  When she realizes she cannot dominate Mark, she breaks off the relationship.  She then takes up with Hardy.  Mark's fury over the betrayal causes Hardy to separate from ChronoShift

Alexander Rialto, a senior agent with the IRS, begins to investigate Mark's tax history.  After 15 years of continual investigation and frustration, Rialto finally discovers Mark's secret, but not before being fired from the IRS for persecuting Mark.

A bitter Rialto kills Ty in the year 2027 and takes Ty’s shifter for himself.  He uses it to kill Hardy, taking that watch as well.  Rialto then recruits for himself an army of time-traveling, ex-mafiosos whose primary objective is to destroy Mark Carpen.

As
Shift
concludes, Mark and Ty have been captured by Rialto's men — Mark in Washington DC at the death of Abe Lincoln in 1865, and Ty in Dallas at the Kennedy assassination in 1963.  Both are set to be executed and neither Hardy nor Savannah have any idea where they are.

if you can solve the code.

A series of electronic chirps from Hardy’s phone interrupted what otherwise would have been a perfectly pleasant breakfast with Laura Kingsley.

Exotic beauty was the only way to describe her.  The caramel tone of her skin was accentuated well by her chestnut brown hair, laced with streaks of blonde.  She captivated his eyes and mind with the raw, physical attraction of her beauty.

Sure, she dyed her hair and wore contact lenses most days that transformed her eyes into sparkling violet amethysts, but who cared?  It looked good.  Her expertise in all things cosmetic came easily to her, even when she made spontaneous changes.

This morning, she'd chosen different contacts.  Her striking purple pupils had been replaced by a bright emerald green.

She was
not
an easy woman to keep happy.  If it weren't for the shifter Mark had given him, doing so would have been near impossible.  She had expensive tastes.

Hardy Phillips lowered the piece of browned toast he'd been buttering and picked up the cordless.

"Hey, Savannah.  What's up?  Did Mark decide he wants to speak to me again?"

"I'm not sure, but I think something's wrong...seriously wrong."

"You know how you guys meet...er...they meet every Monday morning.  Well, yesterday, neither Mark nor Ty showed up.  There's no good reason for them to miss.  You know that better than anybody."

"You know about the shifters?"

"I pretty much figured it out by myself, so Mark filled me in."

"I see. Well, you're right.  If they didn't show up for the Monday meeting, something's wrong.  I'll be right over.  Fill me in when I get there."  He terminated the call.

The Monday morning meetings had been designed to serve as an alarm system of sorts as much as a planning time.  Since the three of them could shift to any hour or minute they ever needed, if one of them didn't show up as scheduled, it could only mean one thing.

"What was
that
about?"  Laura inquired.

"Mark and Ty are missing.  I've got to go and see what's going on."

"Mark's a big boy...surely he can take care of himself.  Why should you go running off to help him when he's not even talking to you?"

"He's not talking to me
because of
you
, Laura."

She knew that.  Better than he did.

"So?  You're still not his caretaker.  It's time you forgot about him and formed your own company."

Hardy scowled.  This was a side of her he didn't like.  "I owe everything to Mark.  If he wants to hate me, that's his prerogative, but I'm not about to let something happen to him.  He saved your life too.  Did you forget?"

She didn't respond except to shoot him a look that told him what she wouldn't be forgetting for several days was this conversation.

He didn't care.  He'd bend over backwards to make her happy with superficial things like money, things that didn't matter, but he wasn't about to let a friend come to harm.  She'd just have to get over it.

Concern lined Hardy's face as he strode into the office.  He glanced sideways at the wall and winced.  The last time he'd been here, Mark had thrown him against that wall and nearly choked the life out of him.

"How are you, Savannah?"

This
was the girl Mark should be pursuing.  She was perfect for him.  More than just pretty, she was beautiful in a delicate, elegant way, and cultured to boot.  Not at all like Laura.  Laura's only good attributes were her physical ones.  Hardy could be happy with that, and yes, he knew how shallow that made him.

Mark deserved so much better than Laura, but he was too blinded by his infatuation to see her faults.
He deserved someone like Savannah.
If she'd just let her hair down once in a while, maybe Mark would notice.

She told him about the manipulated bank accounts and the discovery of a man named Smith who not only had a shifter, but was actively trying to harm Mark.  Recounting how they'd searched for Smith and undone his sabotage, she showed Hardy the note that Mark had found in the bank vault when he'd last confronted Smith.