Read Chasers of the Wind Online

Chasers of the Wind 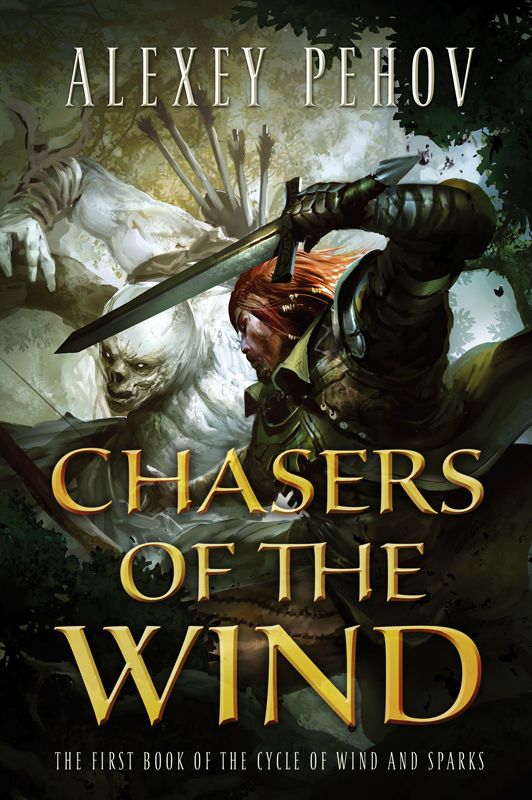 I would like to thank Trident Media Group and especially Robert and Olga Gottlieb, whose efforts made this book possible. My wife, Elena Bychkova, who worked on this book as I did. This book is dedicated to you, the reader. Welcome to the new world.

Map of the Southern Empire and the adjacent countries

He who chases the wind will find the storm.

Luk had been unlucky last night. He’d had to take over someone else’s shift, and as a result he hadn’t had nearly enough sleep. Huddled against the early morning chill, the guard jiggled his legs and chafed his cold fingers in his mittens. Every other second his thoughts turned to the grand party that had been organized for the fifth barracks in honor of the Feast of the Name. Most of the garrison was planning to start celebrating early this morning, but here he was occupied with this nonsense.

“Screw a toad,” muttered the soldier.

If the commander was so afraid of absent enemies, then why didn’t he order the gates to be closed? These past few years, the vast forty-yard-high wings had stood wide open even during the night and not a single rat had dared to sneak through. What was the point of strengthening the watch if it would be far simpler to just lower the portcullis?

Damn that stupid commander! Damn the sergeant! Muttering curses under his breath, Luk moved along the wall from the Tower of Ice to the Tower of Fire. Along the way he gave a nod to his friends, who were drunk on hot shaf
(a weak, spiced alcoholic beverage, infused with hops, thyme, chamomile, goatweed, and linden)
, giving half an ear to the usual little jokes and remarks addressed to him, lazily straggling and then moving on somewhat quicker when they reminded him of his debts. Luk had no love for returning money.

The Gates of Six Towers was the greatest fortress in the world, constructed by the Sculptor himself, and it guarded the only passage through the western region of the Boxwood Mountains. The famed citadel had withstood many an onslaught over its thousand-year history, but had never been taken. The army of Nabator had broken its teeth against the gray stones and lost many warriors in the process. Causing the fortress to surrender would require something more forceful than steel and bravery.

While the Gates exist, the soft underbelly of the Empire remains safeguarded.

Luk watched as two women exited the Tower of Rain onto the wall. A Walker and an Ember. The mages were conversing about something, and the guard paused, reluctant to interrupt their conversation. He turned away toward an arrow loop, scrutinizing the scene before him.

He had been born in a small prairie village, and even now, six years after he first saw the snow-covered peaks, he never tired of marveling at the beauty of the mountain heights. The Gates, situated between two ridges, bridged the entrance to the lowlands, where the route into the heart of the country began.

In former times, multitudes of caravans had made the journey to the south. Weapons, silks, carpets, spices, horses, and hundreds of other wares passed through the Gates to distant countries beyond. But that golden age had long since passed, and the route had dried up. Only the local herdsmen, as well as the scouts that the commander kept sending into the nearby ravines, ever dared to venture along the old route and ascend into the inhospitable mountains.

But something strange had been going on with the scouts recently. The second squad of northerners was already late, even though it was long past the deadline when they should have returned. The commander was taking his frustration out on the captains, and they, consequently, were taking it out on the sergeants and the common soldiers.

The guard, unlike the officers, secretly rejoiced that the squad, in which the red-haired Ga-Nor served, was still wandering around the neighboring environs. Luk owed the northerner money. But he didn’t have very much money at the moment. He’d blown too much of it on the dice last time. Almost all of his wages had disappeared into his debts, into other people’s purses, screw a toad! All there was in his purse right now was one sol
(a small silver coin)
, and that was not nearly enough money for Ga-Nor, but he had to find a way to pay him back; the northerners were a straightforward people, and if everything wasn’t just so, he’d get it right in the choppers.

The soldier leaned out of the arrow loop and spat with relish. He followed the spittle with his eyes, hoping it would land on some heedless idiot, but to Luk’s intense disappointment, there was no one standing under the wall. For the hundredth time since that morning he swore an oath and then resumed his contemplation of the landscape.

A small town was spread out in front of the Gates. The humble dwellings were constructed of round stones and clay, which had been taken from the banks of a nearby mountain river. The families of shepherds, wool merchants, and silver miners lived in the settlement. The villagers were not frightened to be living on the very edge of the Empire. The fortress was impregnable; the soldiers experienced. None of the mountain tribes would bother them here. They had already taken it on the nose more than once, and they knew that they couldn’t seize the Gates. It would be quicker to gnaw a passage under the mountains than to tear down the mighty walls of the impregnable fortress.

Despite the fact that it was early summer, the air smelled slightly of frost. Rays of sunlight painted the snowy heights of the mountains with rose, and the peaks were shrouded in clouds. The sun was slowly climbing up from behind the eastern range. Another minute passed, and the sun began to shine so brightly on the summits that Luk screwed his eyes shut and once again called on his toad.

When the guard opened his eyes, he saw that two skinny mules hauling an old caravan had appeared on the empty morning road. From such a height the caravan was no bigger than the palm of his hand, but Luk could clearly make out a woman sitting on the driver’s seat.

She was dressed almost entirely in rags. She looked just like a stuffed scarecrow. The soldier frowned in confusion. Had one of the villagers taken it into her head to set off for El’nichi Ford? It was fifteen leagues away. It would be stupid to haul wool to the fair, which had been arranged in honor of the Feast of the Name. To have any chance of trading goods, she should have set out six days earlier. Now she was just wasting the labor of her animals for nothing. Even if she hurried, she’d get there far after the trading had ended.

A strange caravan. He didn’t recognize it. And that old woman. More like a beggar than anything else.

Luk frowned, trying to recall if there was anyone in town who had two such emaciated mules, not to mention a caravan with a blue top. A quick rundown of all his acquaintances’ names and nicknames gave him nothing. If the guard could trust his memory, he’d never seen such a piece of junk. And after all the time he’d served here, standing by the Wing, the soldier knew everyone who did business at El’nichi Ford quite well.

One of two things was going on. First, she could be someone who traveled to the town while it wasn’t his shift. Secondly, the unfamiliar wagon could have come out of the pass, and therefore, from Nabator itself.

The strange wagon still had about two hundred yards left until it reached the Gates when he called out to a friend of his who was chatting with two other guards.

“What?” he responded petulantly.

Rek grumbled discontentedly, but all the same he turned in the direction indicated. For several seconds he watched the road apathetically and then he turned his gaze on Luk.

“Neither do I. You think she came from the pass?”

Overhearing something about the pass, the seated soldiers leaned toward the arrow loop.

“The captain should be informed,” Rek said uncertainly.

“You go inform him yourself,” muttered Luk. But then he replied, “Shout down below, get them to check who it is and what she’s doing here.”

Rek turned away from the arrow loop, brought his hands to his mouth, and bellowed to the guards standing in the exterior courtyard of the fortress. At that very instant, a captain emerged from the barracks with the twenty unfortunate wretches who were doomed to work on the holiday.

Meanwhile, two guards stepped away from the wall and slowly made their way toward the caravan. Another dozen, mostly just curious, stood by the Wing. The woman tugged at the reins and said something in reply to the soldier’s question. Luk would have paid a lot of money to hear exactly what was said. But a moment later he saw eight men emerge from the caravan. Six of them were dressed in chain mail and armed to the teeth. But it was the sight of the other two that froze the blood in Luk’s veins and sent shooting pains throughout his stomach. They were wearing white robes!

The guard wanted to call out, to catch the attention of the Walkers, but fear made his voice seize in his throat. Unable to rip his gaze away, he watched as the warriors, dressed in the colors of the kingdom of Nabator, killed the surprised soldiers and started running toward the fortress.

A battle broke out below.

Something snapped, howled, hissed, and the captain and his men were swept through the courtyard of the citadel in bloody scraps. The staff of one of the Sdisian sorcerers was emitting a gray light.

Once again there was a rumbling, though not as loud as before, and all that remained of the necromancer and the Nabatorian standing closest to him was a wet spot. The Walker was invoking her Gift, and the Ember was standing next to her, pressing her palm into the Lady’s back.

What You Really Really Want by Jaclyn Friedman
In the Crossfire (Bloodhaven) by Lynn Graeme
Rose, Charlotte - Bayou Rescue [The Shifters of Alligator Bend 1] (Siren Publishing Ménage Everlasting) by Charlotte Rose
Daughters of the Doge by Edward Charles
For King and Country by Annie Wilkinson
Beyond the Bayou and Other Short Stories by Kate Chopin
Codeword Golden Fleece by Dennis Wheatley
Falafel Jones - Max Fried 02 - Payback's a Beach by Falafel Jones
Chantress by Amy Butler Greenfield
Gentlemen Prefer Blondes by Anita Loos