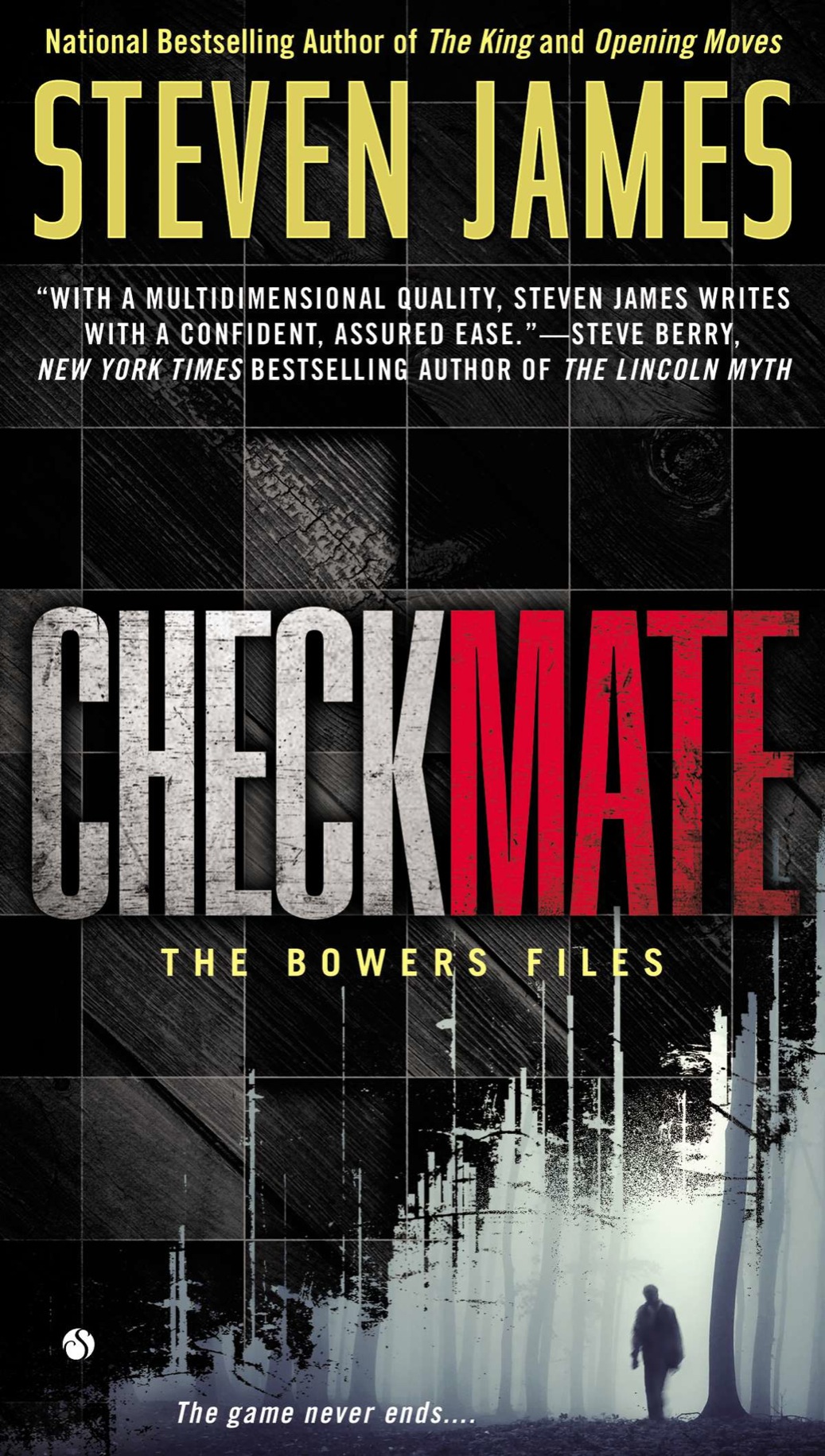 “James writes smart, taut, high-octane thrillers. But be warnedâhis books are not for the timid. The endings blow me away every time.”

Praise for the Novels
of Steven James

“
Checkmate
is high tension all the way. The author writes with precision and incisiveness. Fast, sharp, and believable. Put it at the top of your list.”

“A perfectly crafted, hard-hitting, intense thriller that takes readers to the top of the cliff and dangles them over the edge. James is an author that every thriller reader should have on their bookshelf.”

“Steven James offers yet another slam dunk in the Bowers
Files series!”

“If you love edgy, intense, on-the-edge-of-horrifying coupled with great writing, then click and order this one now.”

“A mesmerizing read. From the first chapter, it sets its hook deep and drags you through a darkly gripping story with relentless power. My conclusion: I need to read more of Steven James.”

“Steven James has created a fast-moving thriller with psychological depth and gripping action.
Opening Moves
is a smart, taut, intense novel of suspense that reads like a cross between Michael Connelly and Thomas Harris.Â .Â .Â .
Opening Moves
is a blisteringly fast and riveting read.”

“Prepare yourself for a horror-of-a-ride, edge-of-your-seat thriller of thrillers.”

“[A] fast-moving, intense thriller that has as many demented twists and turns as the crimes themselves.”

“The novel moves swiftly, with punchy dialogue but
gruesome scenes. Readers must be ready to stomach the darkest side of humanity and get into the minds of serial killers to enjoy this master storyteller at the peak of his game.”

“This novel is fresh and exciting.”

“Steven James's
The Bishop
should come with a warning: Don't start reading unless you're prepared to finish this book in a single sitting. Riveting!”

“
The Bishop
âfull of plot twists, nightmarish villains, and family conflictsâkept me turning pages on a red-eye all the way from New York City to Amsterdam. Steven James tells stories that grab you by the collar and don't let go.”

“Steven James locks you in a thrill ride with no brakes. He sets the new standard in suspense writing.”

More Praise for Steven James
and His Award-Winning Novels

“Once again, James has given us a ripsnorting thriller with a beating heart.”

“Brilliant.Â .Â .Â . Steven James gives us a captivating look at the fine line between good and evil in the human heart. Not to be missed.”

“Best story of the yearâperfectly executed.”

“Steven James writes at a breakneck pace, effortlessly pulling the reader along on this incredible thrill ride. A writer to watch for.”

T
HE
B
OWERS
F
ILES

Also from THE BOWERS FILES

“After the game, the king and the pawn go into the same box.”

He stood in front of the mirror, unsure he really wanted to remove the bandages.

His plastic surgeon had said there wouldn't be any scarring, had promised him that the incisions on his face would heal quickly, that the stitches would come out on their own.

But still, the surgery hadn't taken place under the most ideal conditions and, although his doctor had an unparalleled reputation, he knew she might have been distracted by everything else that was going on.

He took a deep breath, reached up, and unfastened the end of one of the bandages that wound around his head.

The surgery had been aggressive and it wasn't the way he would have preferred going about this, any of this. Everything was rushed and the thought of seeing what he would look like for the rest of his life made him a little uneasy.

Slowly, carefully, he began to unwrap the bandage.

His surgeon had told him to wait three to five days.

It had been two.

Though he was relatively self-possessed in many areas of his life, he was anxious about this. There was so much to do before August and he wouldn't be able to do any of it if the surgery wasn't successful.

As he unraveled the bandage he saw that it was tainted with dots of dried blood.

Unraveled. That's a good way to put it.

Everything that was true of your life just over a year ago has unraveled.

The last few bandages were placed across the incisions and stitches.

Somewhat hesitantly, he peeled them off, until he was looking at his new face, revealed.

It was the strangest sensation, staring into a mirror and seeing the face of a stranger you knew to be yourself.

After depositing the bandages in the trash can beside the sink, he studied his reflection.

Yes, his face was swollen and misshapen, but even with all that, he could tell the difference.

His plastic surgeon really had done an amazing job, especially considering how much stress she'd been under when she performed the surgery.

He had the same bone structureâyes, of course, certainlyâand the same general characteristics, but there were enough subtle differences to make it appear that he was someone else entirely.

“We are all strangers to ourselves,” he remembered hearing one time, “when the masks fall away.”

Well, had the masks really fallen away, or was this just another one for him to wear?

Either way, he was emerging, unfolding, like a butterfly flexing its wings for the first time.

Some people seek out surgery like this to hide the signs of aging. Others need it to recover from a life-altering accident. Still others so they can start over, start fresh.

A second chance to get things right.

After all that'd happened in the last year, after all the publicityâwhich, truthfully, still hadn't quieted downâafter all that, well, it would be much easier if there was a way to go online and pull up the information that was out there and press Delete.

But it doesn't work that way with the Internet.

In cyberspace there's no way to erase your past.

He ran a finger along his jawline and then over the ridge of one of the incisions.

So you have to erase yourself.

A few follow-up appointments with his plastic surgeon would probably be a good idea, but the logistics made that difficult and he expected that he would only be seeing her one last time.

He would ask her about the best post-op care, make sure he knew how to avoid infection, and then be on his way.

Touching the mirror, he traced the outline of his face on the cool glass.

Here is where you are now. Here.

His wife had divorced him last summer.

He had lost all of his friends during the trial.

Yes, it was time to make a break with the past.

But first, a visit to his surgeon.

Turning off the bathroom light, he headed for the basement, where he'd kept her since the surgery.

Both her and her boy.

When he opened the door at the top of the steps he could hear the child crying.

He decided he would take care of him firstâthat way the boy wouldn't be frightened when he saw what was happening to his mother.

Unpocketing the knife he would be using, he flicked out the blade, closed the door behind him, and descended the stairs.

To write the first chapter of his new life.