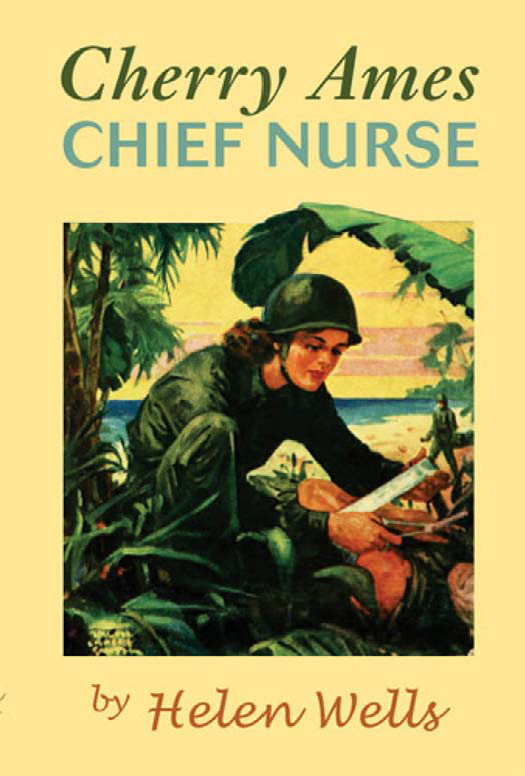 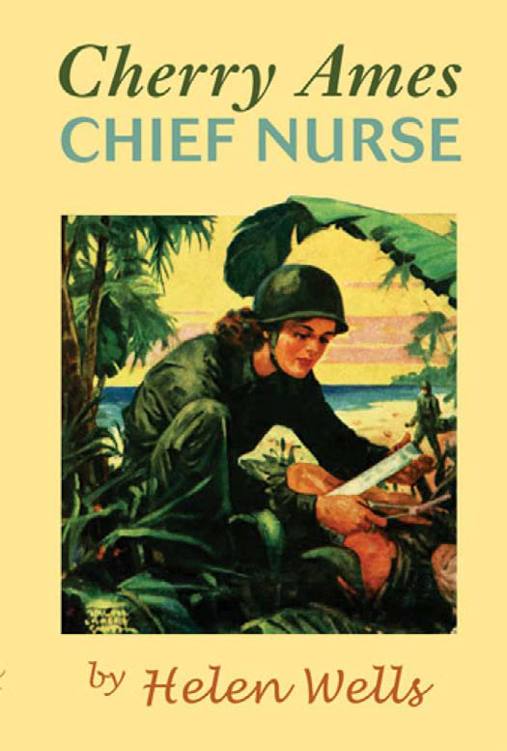 All rights reserved. No part of this publication may be reproduced stored in a retrieval system, or transmitted in any form or by any means, electronic, mechanical, photocopying, recording, or otherwise, without the prior permission of Springer Publishing Company, Inc.

p. cm. — (Cherry Ames nurse stories) Summary: Now chief of her unit in the Army Nurse Corps, Cherry Ames has the support of her Spencer Hospital friends as she strives to meet the challenge of organizing an evacuation hospital on a Pacific island.

Printed in the United States of America by Bang Printing
Contents

Helen Wells, the author of the Cherry Ames stories, said, “I’ve always thought of nursing, and perhaps you have, too, as just about the most exciting, important, and rewarding, profession there is. Can you think of any other skill that is
always
needed by everybody, everywhere?”

I was and still am a fan of Cherry Ames. Her courageous dedication to her patients; her exciting escapades; her thirst for knowledge; her intelligent application of her nursing skills; and the respect she achieved as a registered nurse (RN) all made it clear to me that I was going to follow in her footsteps and become a nurse—

nothing else would do. Thousands of other young people were motivated by Cherry Ames to become RNs
vii

as well. Cherry Ames motivated young people on into the 1970s, when the series ended. Readers who remember reading these books in the past will enjoy rereading them now—whether or not they chose nursing as a career—and perhaps sharing them with others.

My career has been a rich and satisfying one, during which I have delivered babies, saved lives, and cared for people in hospitals and in their homes. I have worked at the bedside and served as an administrator. I have published journals, written articles, taught students, consulted, and given expert testimony. Never once did I regret my decision to enter nursing.

During the time that I was publishing a nursing journal, I became acquainted with Robert Wells, brother of Helen Wells. In the course of conversation I learned that Ms. Wells had passed on and left the Cherry Ames copyright to Mr. Wells. Because there is a shortage of nurses here in the US today, I thought,

“Why not bring Cherry back to motivate a whole new generation of young people? Why not ask Mr. Wells for the copyright to Cherry Ames?” Mr. Wells agreed, and the republished series is dedicated both to Helen Wells, the original author, and to her brother Robert Wells who transferred the rights to me. I am proud to ensure the continuation of Cherry Ames into the twenty-first century.

The final dedication is to you, both new and old readers of Cherry Ames: It is my dream that you enjoy Cherry’s nursing skills as well as her escapades. I hope that young readers will feel motivated to choose nursing as your life’s work. Remember, as Helen Wells herself said: there’s no other skill that’s “
always
needed by everybody, everywhere.”

cherry ames stood under a palm tree somewhere in the Pacific, the day after Christmas. The officer who had just helped her off the plane said, “Stay here in the shade. Now if you will please excuse me for a minute—” and walked away. Cherry watched him go and squinted through the heat haze at the parked Army bomber which had brought her here this afternoon. “Of all places for me to be spending Christmas!” she thought.

“I’ve crossed the international date line and lost a day, so I’ll count today Christmas. But of all the un-Christmas-y places! I’ve read about romantic tropic isles, but I never thought I’d get to one
this
way!” She pulled down the trim jacket of her nurse’s olive drab uniform, and set the jaunty cap more firmly on her black curls. Cherry’s eyes were black too, large and
1

sparkling, thoughtful but full of fun—brilliant red cheeks and lips and a warmhearted smile lived up to the lively promise of those eyes. She knew perfectly well, of course, that a nurse, and especially an Army nurse, can, in the course of duty, nonchalantly pop up in any corner of the world. “But I wish,” she thought,

“that someone would kindly tell me what I’m here
for!
” She had been an Army nurse only four months. Her first foreign assignment had been with her own Spencer Hospital unit at the Army hospital in Panama. Suddenly she had been ordered to pack her things and to be ready to board a plane which was leaving in an hour. Then for twenty-four hours she was whisked through empty skies over the Pacific. Now she had been set down on this island—all without a word of explanation. Cherry felt distinctly breathless. She did know that she was to deliver a new serum to research doctors here who were seeking new ways to fight malaria. But that would take only a few minutes. After that, on what new adventure would the Army Nurse Corps send her?

Cherry stared at the first hibiscus blossom she had ever seen, then glanced up into the tree hoping to see a monkey or at least a coconut. She looked around inquisitively. To one side were hospital and Army buildings, beyond lay the Pacific, ahead rose the jungle.

She certainly was a long way from Hilton, Illinois, her home town.

Cherry was on Port Janeway, one of the larger islands which dot the vast Pacific Ocean. These islands, like a chain of irregularly-spaced steppingstones, lead to war-making Japan. There were few signs of Christmas, much less a white Christmas, on this hot jungle island, with its fortifications, its wooden base hospital buildings, thatched huts, and sound of distant gunfire. Port Janeway, recaptured from the enemy, was being used as a resting place for the hard-pressed or wounded American soldiers who were driving the enemy off the forward islands.

A young officer burst out of the door of the largest hut. “Lieutenant Ames!” he called.

“You will please come with me,” the aide directed.

Cherry gulped and followed him. The aide was leading her into Medical Headquarters. Here came her fate!

Cherry entered the office and stood at attention. Before the desk stood a thin, long-bodied, short-legged man. He had small dark eyes, and a lone thatch of yellow hair stood up on his head. He reminded Cherry irre-sistibly of a stork. Beside him stood another officer, a doctor, for he wore the gold caduceus of the Army Medical Corps.

Lieutenant-Colonel Pillsbee cocked his head, saluted, and Cherry saluted in return. Then he held out his hand.

“How do you do, Lieutenant Ames. I am glad you arrived safely,” he said stiffly. “Major Pierce, Lieutenant Ames.” The Major was a handsome, graying, easy-mannered man. Cherry liked the way his eyes and mouth crinkled up in a genial smile, and the substantial, comfortable look of him. He shook hands with Cherry as if trying to put her at her ease. “You’re going to hear some news, Lieutenant!”

“Lieutenant Ames, Major Pierce has informed me that he has received orders from Washington that you are to be promoted to the rank of acting Chief Nurse, and first lieutenant.”

“Oh!” She was going to be Chief Nurse! Her mind was racing. So this is what Colonel Wylie had hinted at when he said, back in Panama, “An important promotion and a new post await you.” Cherry had expected a promotion to first lieutenant, but she had never dreamed of this added distinction. Chief Nurse! Chief of what?

Where? Wasn’t she going to work with Spencer unit and her old nurse friends any more?

“The rank of
acting
Chief Nurse,” Colonel Pillsbee observed, “is—er—similar to a probationary status.” Cherry sobered. “I understand, sir,” feeling some advance worry at the new responsibilities which, she knew, accompanied her proud new bar.

“Spencer unit is being brought here from Panama,” Colonel Pillsbee explained solemnly. When she heard this, Cherry’s spirits soared. Then she would continue to work with Ann and Gwen and all the rest of her old classmates! The Commanding Officer continued,

“Ordinarily the unit would stay in Panama a year, but there is an even more serious nurse shortage here.

Colonel Wylie will not head the unit as formerly. Major Pierce will be the new Spencer unit director.” Cherry involuntarily turned to smile at jolly Major Pierce, and received a twinkle in reply. She was glad he was to be her superior officer, though she suspected she would miss the quick-tempered Colonel Wylie with whom she had clashed so often in the past.

“But what about Major Joseph Fortune?” Cherry asked anxiously for her old friend. “And Captain Lex Upham?

Won’t they continue to be part of the Spencer unit?”

“No,” said Colonel Pillsbee, “Major Pierce is getting fifty new men, doctors, and some technicians. There
6

will be the original sixty nurses from Spencer Hospital and Nursing School. The nurses are in your charge now, Lieutenant Ames. Also there will be about two hundred corpsmen to assist the nurses. We estimate that—Major Pierce, have you the figures here?” While the two officers studied some papers, Cherry thought of Dr. Joe, who had inspired her to enter nursing, and of her particularly good friend, Lex. Brilliant, headstrong, unpredictable, lovable Lex! She remembered how, when she was a student nurse, and she and Lex were just getting to know each other, she had helped clear Lex of the ugly suspicions surrounding him when Dr. Joe’s formula was stolen and circumstantial evidence pointed to Lex’s possible guilt. But it was Lex who had come to her aid in Panama, who had loyally helped her to solve the mystery of the Indian. Cherry thought of the ring he had offered her—twice—and smiled ruefully.

Mask of A Legend by Salamon, Stephen Andrew
Minaret: A Novel by Leila Aboulela
New Game in Town by Cora Lee Gill
Brad's Bachelor Party by River Jaymes
Literary Love (Lazy Love Book 2) by Kirsten Osbourne
The Wildest Heart by Rosemary Rogers
In the Shadow of the Crown by Jean Plaidy
We Are Pirates: A Novel by Daniel Handler
Madwoman On the Bridge and Other Stories by Su Tong
Without Borders by Amanda Heger