Chrysalis: The Emergence of Emery (The Gifted Series Book 1) 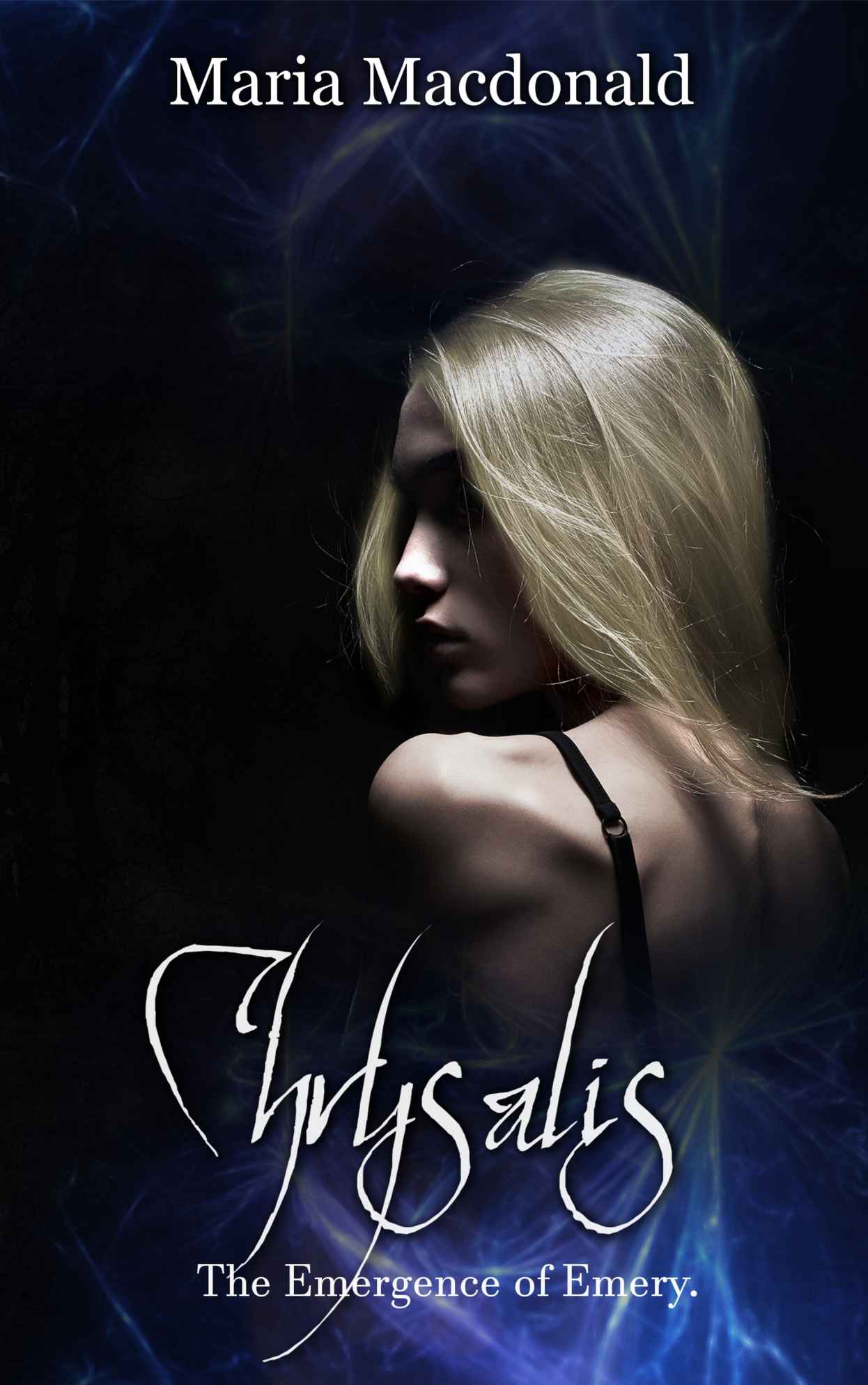 The Emergence of Emery

This book is a work of fiction. Any references to real events, real people, and real places are used fictitiously. Other names, characters, places, and incidents are products of the Author’s imagination and any resemblance to persons, living or dead, actual events, organizations or places is entirely coincidental.

All rights are reserved. This book is intended for the purchaser of this e-book ONLY. No part of this book may be reproduced or transmitted in any form or by any means, graphic, electronic, or mechanical, including photocopying, recording, taping, or by any information storage retrieval system, without the express written permission of the Author. All songs, song titles and lyrics contained in this book are the property of the respective songwriters and copyright holders.

You are perfect, exactly as you are.

You always will be.

Emery never realized the kind of power she held.

Her whole life had been one long battle. Against other children, bullies, her abusers. Forever the outsider, living her days isolated and lonely. She didn’t know that while waging her own battles, another kind of war was coming.

In just one night her whole life changed.

When she finds herself in danger, the power that was lying dormant inside of her suddenly releases, surprising everyone.

In the aftermath, a figure appears in the shadows – Elijah. With an air of mysteriousness and answers she had no idea she needed, Emery suddenly understands she’s not alone.

He’s either here to save her or bury her. But with no time to ask questions, she takes the plunge, grabs his hand, and prepares herself for a whole new world. One where she will be reborn.

Connect With Me Online

About the Author –Maria Macdonald

I didn’t look back when they called names. I ignored the sharp pain in my back, from the stones and empty soda cans they threw at me when I walked by. I kept my face hidden from them and controlled my tears by biting my tongue, until the familiar metallic taste flooded my mouth. It’s what I always did.

I was different, and the children within my small town hated me with a passion that I didn’t rightfully understand at my young age.

‘Emma the elephant’ and ‘alien face’ were amongst the common names that were used to describe me as a young child. It progressed and evolved to ‘salad dodger’ and ‘wide load.’ Though the one I was called the most was ‘rat girl’ which was meant to be like
Bat Girl
, but it was more of an insult than anything else. They used the name because my teeth were bigger in the front. Like a lot of children I had to grow into them. I was alone. Isolated. Hated and abused. I had no parents, no one to care for me. My whole life had been hollow, empty, and the feeling, it seemed, was to be terminal.

The day my life changed monumentally is one I’ll never forget. It was the day I was reborn.

Walking from my job at the local bookstore, the sun had set and I wrapped my arms around myself as a chill started to seep into my skin. That’s when I saw them.

In school there was a bigger crowd, but tonight I saw only three. Boys… almost men. They were eighteen now, just like me. They hadn’t stopped dishing out the insults since they began back in first grade. In fact, after returning this last year, it’s become worse.

My looks changed over the summer. I grew into my body, and my teeth, my spots cleared and my hair is now thick and lush. These boys noticed me, they all did. The taunts never stopped, but I saw it in their eyes—there was an annoyance. Just like it had always been, but now there was also a want… they wanted the new me. They hated craving me, it was new to them and they just didn’t know what to do about it. Plus, none of them were brave enough to admit it. Not that it would have changed anything. Let’s face it, I hated them all, with a passion.

When they approached me that night it wasn’t with caution. It should have been. Fear would have served them well. I was meek, quiet. I didn’t fight back. I was an easy target… that’s what they thought.
That’s what I thought
. Why would they be frightened of little old me?

When they pushed me into the back alley and tried to rip my clothes off, things changed. I listened to their voices, heard the evil inside them, felt the cruel enjoyment that wept from their pores. I didn’t understand it then. But I do now. That fight was monumental and thus began my life.

I was reborn, I was new, I became what I was always meant to be. They started that, but they’ll never know, never see. I killed them that day—all three boy-men. They were sons, nephews, boyfriends. Hell, they might have been future presidents for all I knew. Either way, I ripped their lives from their bodies in the blink of an eye.

I still feel that evil, the grime under my fingernails, it eats away at me. One day it might win and then all could be lost. For now, I hold it back, like a dam impounding water, controlling it and stopping it from overflowing and decimating everything in its path.

That night, as they tried to rape me, pawing at my clothes, laughing among themselves, while I was on the floor assured of my death, or at the very least my violation, my heart rate picked up speed and something sparked inside me. Something that had lain dormant, something that would set me free. Something that was so unnatural to me, yet felt so very right.

When the light took over it was blinding, I couldn’t control it. If I’d have known how
,
then perhaps they would have survived—maybe. When I touched them with my hands, trying to push them off me, they screamed. It was bloodcurdling and as their flailing arms stilled and their lifeless bodies dropped to the asphalt. I had no time to recover, to make sense of the situation surrounding me. A shrouded figure bounded out of nowhere, grabbed my wrist and hauled me up.

“Come with me, Emery,” he ordered softly, but I couldn’t move.

As I tried to blink away the events, dismissing them as my crazy overactive imagination, he must have seen the confusion, or maybe it was fear that was clear in my eyes.

“Emery, you killed them,” he told me as gently as possible, pointing to my three attackers on the floor.

I looked down at their bodies but felt nothing. No remorse. No regret. I was just cold from the wind that whipped against my skin through torn clothing and from the ice that I’d allowed to fill me inside, shutting out every truth from that night.

Now that time has passed, I see the vision that I blocked out back then so clearly in my nightmares sometimes. I feel it all now.

“I need to get you somewhere safe. Then I can explain everything,” he told me with a tug forward.

I could hear the sirens in the distance, someone must have seen something, and the cops were closing in. I had no time to think, no time to decide if this person urging me to follow him was good or evil. But knowing what I did, I wasn’t entirely sure if
I
could be classed as good anymore. What I knew was that I had no one in my corner. So I made a choice that night and followed the man who seemed to hold the promise of something else, something better than the lowly existence I loathed.

That was how this started.

Now that fight I thought was huge that first night, seems insignificant to what I face. What we all face. Now I’m in the fight of my life. For everyone and for myself.

But to tell the story, I need to go back to the beginning. Back to my emergence.

Against the Country by Ben Metcalf
Zom-B by Darren Shan
The Renegades of Pern by Anne McCaffrey
Farewell Summer by Ray Bradbury
Fatal Exposure by Gail Barrett
Obedience by Joseph Hansen
McCade's Bounty by William C. Dietz
Inside Out by Unknown Author
Che Committed Suicide by Markaris, Petros
[Dept. 19 Files 02] Undead in the Eternal City: 1918 by Will Hill