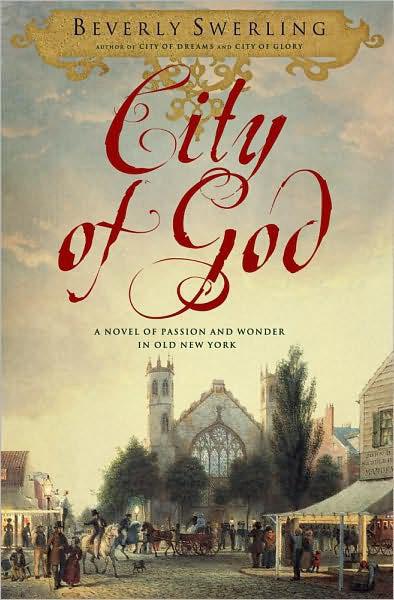 A Novel of Passion and Wonder in Old New York

A
LSO BY
B
EVERLY
S
WERLING

Shadowbrook:
A Novel of Love, War, and the Birth of America

City of Dreams:
A Novel of Nieuw Amsterdam and Early Manhattan

City of Glory:
A Novel of War and Desire in Old Manhattan

All rights reserved, including the right to reproduce this book or portions thereof in any form whatsoever. For information address Simon & Schuster Subsidiary Rights Department, 1230 Avenue of the Americas, New York, NY 10020.

For Bill as always,
and for Michael, our forever darling boy. RIP.

Glory be to God for dappled things—

For skies of couple-colour as a brinded cow;

For rose-moles all in stipple upon trout that swim;

Whatever is fickle, freckled (who knows how?)

He fathers-forth whose beauty is past change; Praise him.

T
HE DEVELOPMENT OF
the theory and technology that in the 1840s led to the building of those breathtaking birds of paradise, the mighty clipper ships, is told as accurately as my research allowed, but in the matter of the timing of particular voyages and the exact dates when certain records were set, I have bent the truth to serve my need. The
Houqua
was launched in May of 1844, not 1843 as happens in this book. As for the
Hell Witch
of my tale, I made her up, and appropriated for her the accomplishments of a legendary ship called
Sea Witch
, who set out for Hong Kong in December of 1846. And while it’s true that New York University was founded in 1831, the School of Medicine opened a decade later, not around the same time as I have it here.

A Short History with No Quiz, and No Penalty for Skipping Straight to the Story

S
OMETIMES IT IS
difficult to tease out history’s threads; not so for this book. The spiritual currents that play a dominant role in this story were let loose in Europe in the early 1700s, in a phenomenon known as the Great Awakening. Reacting to the secularizing forces of the Enlightenment, which railed against organized churches and insisted that reason tells us all we need to know of life, there were those who protested that true religion did exist. Marked, they said, by reliance on the heart over the head, feeling over thinking, and the belief that biblical revelation is meant to be taken literally.

The Evangelical movement had been born, and its fervor swept it across the ocean. In 1730 the Scots-Irish Presbyterian minister William Tennent and his four clergyman sons began preaching in the colonies of Pennsylvania and New Jersey and established a seminary to train others who could bring sinners to Evangelical conversion. (Originally called Log College, that seminary is today Princeton University.) Before long the intensity of their conviction spread to the Congregationalists and Baptists of New England.

The fire of Evangelicalism burned brightly in the New World; then
politics and war—first with the French and their Indian allies, next with the British—stole the oxygen from struggles of the spirit. The movement remained quiescent until the flint of the ideas that had fueled an unprecedented break with a king—the notions of individual freedom and every man’s right to pursue happiness—met the spark of religion without hierarchical authority or complex theology and burst into new flames. What historians have since labeled the Second Great Awakening was nothing short of the rebirth of the Evangelical movement in the infant U.S.A.

In the years immediately after Independence, itinerant Methodist and Baptist preachers roamed the hardscrabble, largely churchless frontiers of Kentucky and Tennessee and sought out venues where they could address a crowd. Those gatherings became known as camp meetings. Dedicated to religious revival, frequently days long, they were occasions when prayer and witness were full of song and spirit and individual conversion in front of huge assemblies created a kind of public ecstasy. Adherents to this emotional and intensely personal form of religion shared an unshakable belief that they held the key to the perfection of society. Drink and crime, carnal excess, poverty and suffering, indeed all injustice and inequality could be eliminated by personal renunciation of sin, acceptance of Jesus Christ as Lord and Savior, and strict adherence to biblical teaching.

Such ardent American belief could not ignore the young nation’s Sodom and Gomorrah. In the 1820s and 1830s revival meetings came to Broadway.

The response of entrenched mainstream Protestantism was to coopt the new beliefs, and some Evangelical ideas soon found their way into sermons preached from Establishment pulpits.

At the same time New York’s Catholics, long marginalized in a city where they had been a tiny minority, were seeing their nascent institutions—a few churches largely serving foreign diplomats and one rather grand edifice, St. Patrick’s Cathedral, on the corner of Prince and Mott streets—overwhelmed by thousands of nominally Catholic, mostly Irish immigrants. Dirt poor, usually illiterate, and frequently in thrall to
the twin evils of alcohol and violence—perceived as the only relief from daily struggle—they were crammed into an already notorious district known as the Five Points and turned it into a hellhole of indescribable misery.

The bishops summoned reinforcements. In the 1820s Catholic Sisters, religious women newly freed from the stricture of cloister, appeared for the first time on Manhattan streets. Black crows they were called. Jezebels. Satan’s whores. They did not preach or hand out bibles, they did not cry out for temperance and abolition and women’s rights and universal free education, the just causes espoused by the Evangelicals. They turned their back on a woman’s highest calling, wife and mother, and instead made vows of poverty and chastity, swearing as well obedience to a foreign ruler, a pope many thought to be the Antichrist. Direct action—feed the hungry, clothe the naked—confronted the notion that true charity is to preach morality and Gospel salvation and allow American free market opportunity to meet economic needs. Only when epidemics of cholera and yellow fever turned the city into a charnel house and the Sisters went on exactly as before, did their fearless heroism win them a certain grudging respect and allow a truce of sorts to be established. It did not, however, put an end to the ongoing demonizing of popery and all its works.

As if this mix were not sufficiently combustible, another once minuscule group saw its numbers swelled by waves of immigrants come to satisfy the nation’s insatiable hunger for workers. During the years 1835 to 1855 approximately one hundred and fifty thousand European Jews made their way across the Atlantic. Many settled in Baltimore, Cincinnati, and even San Francisco, but the large majority stayed in New York. Since 1654 when New York was New Amsterdam there had been one Jewish synagogue on the island of Manhattan, Shearith Israel, first located on Mill Street (now Stone Street), and in the time period of this book moved to Crosby Street. Shearith Israel followed the liturgical practice of the Sephardim, Jews who had lived in Spain and its colonies for the more than fifteen hundred years since their exile from the Holy Land. The new American congregants, mostly German Jews known as
Ashkenazim, wanted their prayer book and their liturgy to prevail. When Shearith Israel refused their demands, the Ashkenazim founded the new synagogue of B’nai Jeshurun, followed by Anshe Chesed, then dozens more. Meanwhile some among them were also hearing the siren song of change and renewal. The movement for Reform Judaism begun in Europe at the end of the 1700s came to New York in 1845 with the founding of Temple Emanu-El in the loft of a nondescript building on the corner of Grand and Clinton streets in what we now call the Lower East Side, soon followed by a move to a former Methodist church on Chrystie Street. (Thus began a progression up the island that culminated in 1927 with the building of Temple Emanu-El on Fifth Avenue and Sixty-fifth Street, today the largest Jewish house of worship in the world.)

On the island of Manhattan the bitter division that almost inevitably follows the inauguration of new ways was, like so much else, intensified by the city’s dynamism, her lust for life, and the proximity of extremes. Introduce family feuds, heroes and villains, love and hate, and the still unchecked malignancy of human slavery, and the scene is set for this tale of miracles of medicine—painless surgery and antisepsis—and others that science cannot explain, though they are written in real flesh and real blood. Here, then, is a story of the city and its people in the run-up to what will be a devastating civil war, during a time when they meet a demanding and a jealous God.

Back To Me by Unknown
Vampire Lords of Blacknall: Trinity by Shirl Anders
Finessing Clarissa by Beaton, M.C.
Skeletons in the Mist (The McCall Twins) by Hayden, Jennifer
Whispers of the Bayou by Mindy Starns Clark
Three to Play by Kris Cook
The Fingertips of Duncan Dorfman by Meg Wolitzer
I Waxed My Legs for This? by Holly Jacobs
The Enemy by Lee Child
A Fortune's Children's Wedding by Barbara Boswell