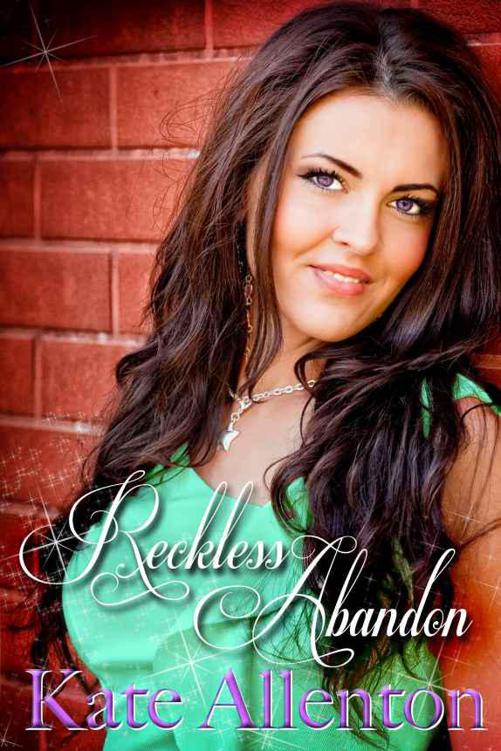 This
ebook is licensed for your personal enjoyment only. This ebook may not be
re-sold or given away to other people. If you would like to share this book
with another person, please purchase an additional copy for each recipient. If
you’re reading this book and did not purchase it, or it was not purchased for
your use only, then please return to Amazon.com and purchase your own copy.
Thank you for respecting the hard work of this author.

Discover other titles by Kate Allenton

Dedicated to
the real Jamie Bloom

For whom my
character was named after.

Your
strength and friendship inspires the best of all of those around you.

May you
always kick butt and take names.

With you ladies in my corner, there’s
no way I can lose.

I appreciate all of your support.

Maxwell Briggs lifted the bottle and sipped the ice-cold
beer. He needed this beer; keeping the Bennett women alive was hard work. He
deserved, and would savor, every last drop of his beer.

He glanced around the little establishment
through the smoky haze that danced around the bar. He’d been in bars like this
before. The only difference was the missing bikers and half-clad women wearing little
else but leather. No, this place was different, calmer than most places he’d
frequented back home. Three older men sat at the bar drinking from frosted mugs
and popping pretzels into their mouths. Their quiet banter gave them away as
friends, or at least acquaintances. A slow country song wailed from the ancient
jukebox with words that mocked him drowning his sorrows. He’d been in town for
three months with no possibility of leaving anytime soon. Lydia Bennett, the
oldest and most powerful of the Bennett sisters, had almost died twice on his
watch. “My track record is going to hell.”

“You can say that again.” Brody Connors, the
most annoying of the Connor twins, agreed as he walked up behind him.

Connors pulled out a chair and swung it around
to straddle the weathered seat. “Is this a pity party for one or can anyone
join?”

Connors lifted his hand toward the young waitress
that looked barely legal enough to be serving alcohol in this joint. “Can I get
a beer, darling?”

The twenty-something waitress gave a shy smile
and lowered her lashes. “Sure.”

Connors was oblivious to the shy girl, but
Briggs wasn’t. He noticed everything and everyone around him. Things like that
made him good at his job, or at least he thought so.

Briggs picked at the label on the brown glass
bottle in front of him. “Don’t you have someone else to go aggravate? I’m sure
Thompson is missing you by now.”

The waitress returned with Connors’ beer. He
winked as he handed her the bills. “Keep the change, sweetheart.”

A light pink traveled up the young girl’s neck
and colored her cheeks.

Briggs shook his head. “Can’t you drink that
somewhere else?” He lifted his hand to his ear and pretended to listen. “I
think I hear your brother calling you. Why don’t you run along now like a good
boy?”

Brody laughed. “Dude, seriously? You think I
actually listen to that stick-in-the-mud? Or you for that matter.”

The door to the bar flung open. The silhouette
of a woman with lush curves stood in the doorway, her face hidden behind the
veil of smoke. She waved her hand in front of her face before she stepped in,
letting the door close behind her to block out the sun.
Jamie Bloom.

Jamie, another one of the powerful, elite
supernatural soldiers, scanned the bar and spotted them in mere seconds. Her
baby-blue gaze held Briggs as she walked closer, closing in on his table. His
gaze lowered. Her jeans hung loose on her hips. Her T-shirt did little to hide
the six-pack abs he’d noticed during their last workout. The woman was sin with
a dash of sugar and a secret past all rolled up in one.

Brody nudged Briggs in the arm. “You’re in
trouble now.”

Jamie sauntered up between the two of them. She
took the beer bottle from Briggs and pressed it against her lips. Tilting her
head back, she drained the remainder of the beer he’d been enjoying.

She swiped at her lush pink lips with the back
of her hand, catching the droplets that had escaped. “You’re up, big boy. She’s
had another vision.” Jaime turned and left the same way she’d entered.

Brody and Briggs remained motionless, both of
their eyes trained on the sway of Jamie’s hips until she was out of sight.

Brody stood and patted Briggs on the back.
“Seems you’ve got some work to do.

Do I
need to drive you back to the compound?”

Briggs pulled out his wallet and laid bills on
the table to cover the tab he’d barely started. “I brought the bike. I’ll meet
you there.”

Briggs pushed out the doors and into the blazing
sunlight, such a contrast to where he’d planned to spend his entire day getting
a good drunk. He secured his helmet and patted the black beast in front of him.
“Let’s go, Bessie.”

He straddled the Harley he’d come to love and
revved the engine. The motorcycle thrummed between his thighs. This was his
type of enjoyment. He loved the open roads and the peace it afforded him. There
wasn’t anything else in the world that could compare. Briggs turned out onto
the open road. He could feel his lips turn up on a grin.
I need to do this more often.

A white van with black-tinted windows pulled out
of a dirt road behind him, accelerating until it was almost kissing Bessie’s
fender.

“Stupid people,” Briggs mumbled as he sped up,
putting more distance between his beloved beast and the idiots behind him. The
driver apparently didn’t understand the rules of the road either that or didn’t
respect them. Keeping distance behind a motorcycle must have been a foreign
concept.

The van accelerated, catching up again. Briggs
strained unsuccessfully to see the face of the driver. Apprehension struck his
gut, and when his gut gave him warnings, Briggs always listened. “Damn.”

It was time to ditch the jerk. He opened the
throttle and left the van in his dust. There was no way the van was going to be
able to keep up with him. He glanced back in his rearview mirror, and the van
was gone, not even a tiny spec in the mirror to indicate that the van was still
on the road.

Briggs slowed the bike and pulled over then glanced
behind him to the empty road. He wasn’t imagining things. The damn van was
gone, clear out of sight. He shook his head and headed back to the compound
while still checking constantly to see if the van would reappear.

He rolled to a stop at the guard station, pulled
off his helmet, and dug out his wallet, flashing his ID to the men standing
guard. They should have been used to him by now, but with the heightened
security, he wasn’t going to complain; Extra security was just one more way to
keep the little visionary safe. They nodded and lifted the bars, allowing him
entrance to the compound beyond.

Briggs laid his palm on the silver box and
pushed through the doors of the compound, emerging in the Intel room. Lydia stood
with her coffee in hand next to Jaime as they spoke in hushed tones to Jonah,
the computer whiz.

All of their gazes fell to Briggs. Lydia grinned
and walked over to him, entwining her arm with his. “I’ve been waiting on you.”
Lydia
leaned into his shirt. “You smell like a smoke factory. Where have you been?”

“The bar.” Briggs glanced around the command
center. Personnel steadily punched at their keyboards. They seemed to have
grown accustomed to him and his group that had shown up only months
before.

She nodded toward the conference room. “In there,
planning.”

Briggs nodded and escorted her to the room.
“Planning what?”

“I think it’s best if I wait and tell you,” Lydia teased.

Briggs opened the door, and they all filed into
the massive conference room. Everyone was in attendance, just as he knew they
would be. General Lister, the man that ran this rodeo, sat at the head of the
table. His presence was still a force to be reckoned with even for someone
lacking gifts like the rest of the unit under his command. Nothing had changed
in the conference room since the last time he’d been in it; plain white walls
surrounded the room with a table for ten sitting in the middle. All of the
major players sat at the table. Some he’d come to tolerate, and others he tried
his best to avoid. Lydia’s
fiancé, Rick Thompson—or, as Brody liked to call him, Romeo—sat next to the
general. Across from him on the other side of the table, the general’s right
hand man and second-in-command, Ridge Connors sat patiently waiting, sitting as
ridged as Brody had described his brother. Briggs held back his chuckle. The
man really needed to get laid. A night on the town would do him some good.

Next to Ridge was Brody, the more annoying and spirited
of the Connor twins. He was doodling on paper just like he did at every meeting
called. Briggs pulled out a chair for Lydia and then another for Jamie,
who’d followed in behind him, before he sat himself.

“Okay, now that everyone is here and accounted
for, what’s going on?” Briggs asked.

Lydia
shook
her head as Jamie whispered into her ear. His gut tightened into knots. The
fact that Lydia
wasn’t shouting from the rooftops like a woman overdosing on caffeine normally
would wasn’t a good sign.

Lydia
cleared her throat. Her vibrant green gaze held his. “Did anything unusual
happen on your way back to the base?”

Briggs leaned back in the plush leather chair.
“A white van was riding my ass, but I lost it.”

Lydia
placed
her hands on the table. “I saw it in my vision. I saw you make it back to base
without being harmed.” She turned toward the general. “It wasn’t just a dream;
it was a vision.”