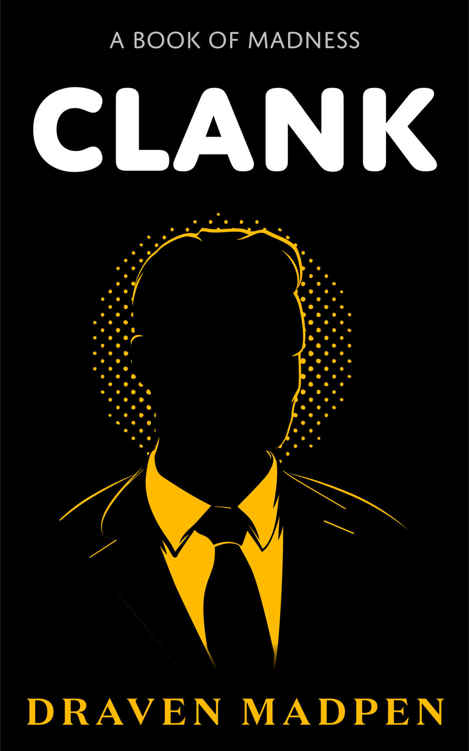 CLANK:
A Book
of Madness
Written
by
Draven
Madpen

As usual, this book is in all likelihood
copyrighted by
Draven Madpen
-- by some U.S. law currently
unknown to me. Don’t steal! Stealing is bad! But on the bright side, this
wonderful novel is presented without any of that nasty DRM software. You know,
the bad stuff that doesn’t allow you to view the story which YOU paid for on
any of the various available platforms! So by all means… enjoy reading this
tale on whatever device you see fit.

Additionally, it
is incumbent upon me to state that this is a work of fiction. While many of the
wonderful, titillating, and entertaining scenarios and incidents are based on human
reality – none of these fictional characters, places, or things are a
representation of any real-life counterparts.

And here I must state that this story
would not have been possible... without my dear, sweet, faithful dog – for
those countless nights where the beautiful beast warmed my feet beneath the
computer desk.

What
You Will Find Within This Terrible Tome

Clank:
A book of Madness

This story could not have been
written, let alone imagined (given the absurd nature of its contents…) without
the boundless inspiration stemming from a rather colorful character in -- Lord
Wurthengton himself!

And here, once again I must
thank the loovlay Miss Spud for suffering through my endless ramblings in the
sordid attempt to finalize this story! In the event that you should find any of
this material to be of an objectionable sort, it is her who the blame should be
cast upon – However, if you thoroughly enjoy the story (as I believe you will),
then, quite naturally, I will be taking all the credit.

In this story I have drawn
from the private reservoir of my own personal psychological unravelings.
Although the events transpiring within this novel may seem outlandish,
farfetched, or ridiculous… I can assure you they are happening the world over
this very moment. A quiet storm brews within the mind. An unseen demon lurking
behind kind eyes and friendly greetings. Without further adieu, with not one
more fabricated piece of praise or laudation, withholding even the tiniest
single congratulatory remark, giving it no more preface or hype, removed from
all pretense, allowing no egotistical stallings of showmanship, and certainly
no overinflated, longwinded introductory passages… I now present to you the
tale of CLANK.

CLANK: A Book of Madness

I work at a high-end law firm
agency located six floors up inside one of those modern buildings. No, I’m not
a lawyer. In fact I barely even know the basics of our judiciary system. They
have a title for my job. It’s got something to do with a lawyer’s assistant or
secretary. The latter sounds a bit too feminine for my liking and so I always
introduce myself as a
lawyer’s assistant.

Though to be perfectly honest,
that sounds a bit low on the ol’ workplace totem pole as well, doesn’t it?
Probably because it is. I’m a lackey. A peon. A cowhand or is it a ranch hand?
A drudge. A doormat. An underling. A bottom feeder. That’s what I am. You
politically correct buffoons can refer to me as a “subordinate.” My name is not
important. Nobody ever remembers it. Today they’re calling me Jim. Earlier in
the morning my boss called me Jason. His associate called me Jarvis (that was a
new one). At least they’re consistent with the J’s.

Unfortunately, my name doesn’t
start with a J. There’s not even a J in it.

Sure, I might have an above
average vocabulary. But who cares? That’s only because I’m the kind of loser
who reads the dictionary for enjoyment. You know that guy your friends used to
point at and say, “He’s so boring he probably reads the dictionary for fun?”
Well I’m that guy. So you can stick your supercilious comments and cavalier animadversions
up your gluteus maximus. You feculent opprobrious simps!

Excuse the outburst… You see,
I have many shortcomings and throwing around some big words makes me feel
important. Sesquipedalian. That means using overly long words. It gives me a sense
of power. Like I’ve got one up on the world. So if at anytime I should break
into a vicious tirade and berate you with unwarranted obloquies, just know I’m
a bitter and broken man trying to be a big shot. Laugh at me if you want. It
seems to be the common reaction. Speaking of that, do you know what Todd
Storton, the water cooler man, did to me last week?

Storton is a big, potbellied
brute with a lantern jaw and caveman-like eye placement. His job is to go
around refilling our water coolers. The big five gallon jugs that weigh about
forty-five pounds a piece. Anyway, this idiot carries four at a time wherever
he goes. One under each arm and one in each hand. And it’s not so much that the
weight is terribly immense, but they’re awkward objects and a man of my stature
has trouble hoisting even
one
onto the water cooler. So you can just
imagine how fat man Storton flaunts it in my face.

The fool fancies himself a bit
of a ladies man. If he sees a pretty office girl in the building he’ll take the
stairs instead of the elevator. Great going, Storton! Hah! As if the girls are
at all impressed by your flabby, grotesque figure lumbering up the steps
hauling four jugs at a time with your unsightly buttcrack showing and the
pungent stench wafting out into the air. Normally, I’d never tell this to him.
It would do no good. The dunderhead isn’t worth my time.

He just goes on with his
business giving me the
I’m so much better than you
look. Here’s the
awful incident which happened last week.

Ol’ portly Storton comes
hulking into my boss’ office carrying the four jugs as usual. His pants were
hanging lower than their customary level, revealing some very unflattering
equipment
of his. I tried to look away but it was just one of
those
things. The
kind of freakish vulgarity you’re unable to tear your gaze from. Those
unintelligent, bulgy eyes of his stared directly at me as I watched him enter.
The malodorous smell filtered in immediately. I always have trouble drinking
the water -- each time I take a sip, my mind invariably envisions Storton… and
that repulsive body.

Just picture a large,
perspiring, hairy man rubbing his pudgy belly all over the water jug as he
places it atop the cooler. I can only guess how much of his
drippings
manage to find their way down into the water tank. Occasionally I find myself
throwing up, just inside my mouth as I drink, but only when the images become
too overwhelming.

Ah, but I digress. Here is my
recounting of the sordid tale.

Todd Storton enters the office
and sees me seeing him, he pauses. He stands there holding the four jugs. His
fetid index finger begins picking at his nose as if he’s taunting me. Trying to
illustrate how effortless the jugs are too him.
Hey! I can pick my nose and
carry these!
Naturally I was very impressed by this elegant display of
virility…

Storton sets the jugs down and
points quizzically at a chair. I unwillingly nod and he sits down in it. The
steel legs begin to bow under his immense tonnage. In the process, his mustard
stained shirt has ridden up, exposing the massive rolls of fat underneath. A
pleasant sight. That abhorrent visual coupled with the unbearable stench,
leaves me gagging. Storton removes his company provided hat and wipes his brow.
I notice his balding head; all the more fitting of the lummox-like appearance
he so desperately cultivates.

The beautiful, young secretary
from down the hall walks by my doorway. Storton and I both turn our heads to
follow her angelic figure. We’re watching her through the glass window with the
shades drawn, overlooking the hall. Her dark hair was pulled back tightly into
a bun. The body was attired in a formfitting blue blouse and matching skirt;
revealing a pair of well toned, well tanned, and smooth looking legs. I can only
say looking, as I have never felt them myself. But I assume… She wore
red-rimmed stylish spectacles that day.

I believe her name is Natasha.
Although I can’t be too sure. I’ve never had the audacity to ask. I assume the
name Natasha belongs to her because that’s what her boss is always saying.
“Natasha schedule this, Natasha order these, Natasha, Natasha, Natasha.”
There’s always the off chance he’s referring to someone else. For now I’ll call
her Natasha.

Storton looks at me with a
lustful expression and nods his head in the direction of her. I sneer at his
stupidity and say, “Storton, that woman will never have the slightest interest
in you.”

He jolts upright, scowling.
“Oh yeah?” he says, “What about you, pipsqueak? She’d pick me over you any day
of the week.”

I take note of the drool
forming at the corners of his oversized mouth.

“Tubgut, look at yourself.
You’re obese, benighted, odious, and repellent.”

I made sure to toss in a few
big words to assert my intellectual dominance over him. The self-help tapes
have really been paying off.

“You haven’t a modicum of
appeal in your entire being. And yes, I’ll give you a minute to go look those
terms up. Need to know how to spell them too?” My head nodded in a pleased
manner, having just put the ogre in his place. But no, ol’ Storton wasn’t
beaten yet. He had the gall to retort.

“Is that so, shrimp?” he says,
walking toward me. The next thing I know there’s a chubby finger shoved in my
face. “I’ll fix you good!”

Then Storton turned and
exited. I observed him head left down the hall and out of sight. Then I heard
his voice. “Ms! Ms!” he was shouting.

A moment later he returned,
and much to my chagrin he had brought back Natasha with him. She stood beside
Tubgut, as they both looked at my reddening face. Storton aimed that chubby
finger right at me.

“He said he wants to spank you
all night and ride you home until, uhh—“ the monstrosity pauses for a minute,
searching for words, “Uhh, until the cows come home… Then do it again!” The
nimrod takes another moment, believing he’s done well. He glances at her
uninterested face. “Uh, then break your glasses. Smash ‘em.”

Uh-oh. The fool had gone and
done it now. The words were not eloquent, true. But they were the best he could
manage. And yet their effectiveness had not been impaired. For Natasha’s face
contorted into shocked revulsion. Her eyes widened as the brows lowered in
irritation. She folded her arms across her chest before storming off in a huff.

Now the woman I’ve never even
spoken to thinks I’m a dirty pervert and it’s all due to that Neanderthal water
jug delivery man.

The Night Watchman by Richard Zimler
Aboard the Wishing Star by Debra Parmley
Like a Cat in Heat by Lilith T. Bell
Fundamentals of Midwifery: A Textbook for Students by Louise Lewis
The Greatest Power by Wendelin Van Draanen
Beauty by Robin McKinley
Ashleigh's Dilemma by Reid, J. D.
McKettrick's Choice by Linda Lael Miller
Watson, Ian - Novel 06 by God's World (v1.1)
The Blackout by Erickson, Stephanie