Read Claws of the Cat Online

Claws of the Cat 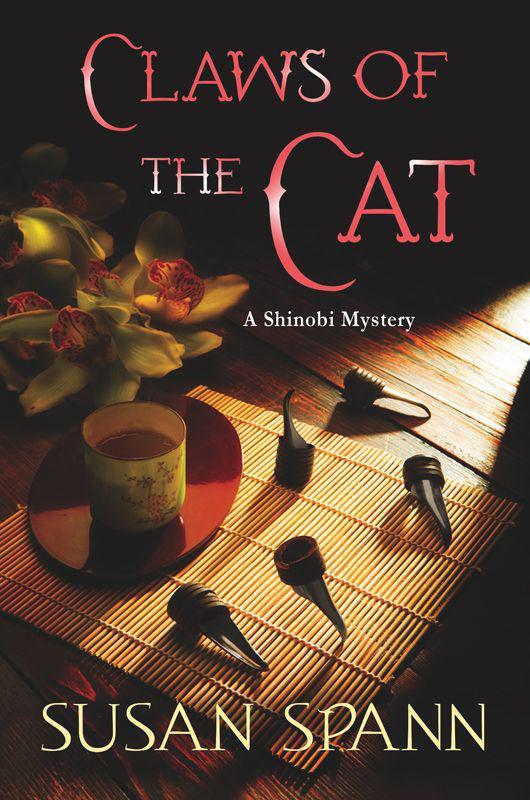 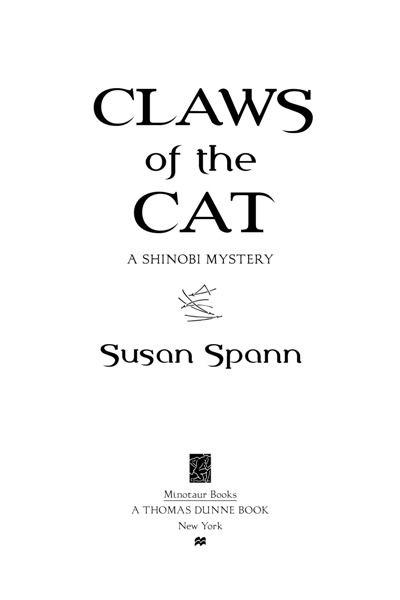 For my mother, Paula, who always believed I could do this.

And for my son, Christopher, who made sure I did it well.

Every author acknowledges how many people help to produce a novel, but nobody ever told me how impossible it would be to thank everyone properly. I cannot begin to express my appreciation for those who have supported me across the years and helped bring this dream to reality—the list would run as many pages as this book.

But there are a few who require special mention:

To my husband, Michael, and my son, Christopher—thank you for the constant love, support, and reinforcement that kept my dreams focused and my butt in the chair.

To my incomparable agent, Sandra Bond, and my fantastic editor, Toni Plummer—thank you both for believing in Hiro and in me. Working with each of you is an honor and a pleasure for which I am grateful every day.

To my peer editors, David and Amanda—thank you for your time, skills, friendship, and patience as I learned to accept the critique my work so desperately needed. You make me better than I am alone.

To my family, Paula, Spencer, Robert, Lola, Spencer (III), Anna, Matteo, Gene, Marcie, and Bob—thank you for loving this crazy scribbler and encouraging her to follow her dreams.

Thank you to Joe, Master of the Interwebz, for more help and favors than I can count.

Domo Arigato Gozaimasu
to Tomoko Yoshihara for her help with translations and maps of Tofuku-ji.

And last, but certainly not least, thank you to Erika Mailman; to Laura, Wing, Peter, and Steve (the Saturday Dim Sum Gang); to the men and women of

Father Mateo strolled through the narrow yard, hands folded and face cast down in meditation. His shoulders bent against the predawn chill. The first two weeks of May had been warm in Kyoto, but this morning the switch to his summer kimono seemed just a bit premature.

At the other end of the garden a shadow snaked over the wall and into a cherry tree with no more sound than a spring wind rustling leaves.

The priest walked on, unaware.

He passed the koi pond without a glance. It was still too dark to watch the fish. At the back wall of the garden the Jesuit crossed himself and knelt before a statue of a man nailed to a cross. The priest’s knees sank into the dampened ground as he bowed his head in earnest prayer.

The shadow moved farther up the tree. Rain-slicked leaves and slippery bark made climbing treacherous, but the
shinobi
did not falter. His hands and feet found purchase where none existed for other men.

A branch grew over the path between the koi pond and the house. The assassin stretched his body along the limb. He moved out over the path without dislodging a single leaf.

And there he waited.

Minutes passed. The eastern sky purpled with dawn’s approach. A fish jumped in the pond, and a delicate splash resonated through the yard.

The priest’s lips moved without a sound.

The shinobi’s black eyes glittered in the depths of his hood.

As the sky turned pale Father Mateo concluded his morning prayers. He stood up and brushed stray leaves from his brown kimono, then frowned at the damp patches over his knees. When the moisture did not rub away he shrugged to himself, nodded to the statue, and turned back toward the wooden house that served as his home and church.

The shinobi’s breathing slowed until even his dark blue tunic ceased to move.

Father Mateo passed the pond without stopping. As he stepped beneath the tree, the assassin dropped to the path with no more sound than a breaking twig and laid a slender hand on the Jesuit’s shoulder.

Father Mateo spun with a startled cry. The shinobi’s hands flew up in defense as the priest’s face tensed and then relaxed in recognition.

“Hiro!” Father Mateo exclaimed. “How many times must I tell you not to do that?”

Dark eyes sparkled within the shinobi’s cowl. “I will stop on the day that I fail to surprise you.”

The Jesuit frowned. “Have you been out all night again?”

Hiro pulled down the cloth that covered his mouth and pushed his hood back onto his shoulders. “I don’t answer that sort of question, remember?”

He reached into the pouch that hung at his side. “I brought you something.”

Hiro raised an eyebrow in amusement and pulled out a small, dark object. It squirmed.

“
An presenta,
” he said in Portuguese.

“
Um presente,
” Father Mateo corrected. Hiro’s Portuguese was startlingly good, considering that the shinobi had studied the language for barely eighteen months. The priest’s Japanese had far more flaws, despite two years of study before his arrival and eighteen months of living in Kyoto.

The present struggled and mewed.

“A small one,” Hiro agreed. He switched to Japanese. “Since you talk to the fish, I thought you would like it.”

The priest switched languages, following Hiro’s lead. “Where did you find a cat?”

“Abandoned by the canal. It’s not a lucky color, but you claim you don’t believe in luck.”

“God controls my fortune,” Father Mateo confirmed, “but lucky or no, I can’t keep a kitten. Cats make me sneeze.”

Hiro considered the squirming ball of fur. “What should I do? I don’t want it to die.”

“Have you become a Buddhist overnight?” Father Mateo grinned at his own joke.

“You know better than that.” Hiro frowned at the kitten. “It needs a home.”

The kitten spun in Hiro’s grip and clawed at his arm. He clutched it to his chest to stop its struggling.

The kitten gave a muffled mew.

The kitten began to purr. It retracted its claws and relaxed in Hiro’s hands. He looked down at the tiny bundle of marbled black and orange fur. A white patch gleamed at the kitten’s throat, and the tiny cat squinted at him through greenish yellow eyes.

Loud banging echoed through the air. It came from the front of the house.

“Open up!” a male voice yelled. “I need the foreign priest!”

“Who did you insult this time?” Hiro arched an eyebrow at the priest.

Father Mateo started for the house. “No one I remember, not intentionally anyway.”

Only a handful of foreigners had the shogun’s permission to live and work in the Japanese capital. Many samurai found even that limited presence offensive.

“At least they’re not Shogun Ashikaga’s men, or the emperor’s.” Hiro followed the priest to the wooden veranda that circled the perimeter of the house.

The men slipped out of their sandals and stepped up onto the smooth, unpainted wood.

“How do you know that?” Father Mateo asked.

Hiro followed the priest inside. “The emperor and the shogun do not knock.”

The room that served as Father Mateo’s bedroom and study had a built-in writing alcove instead of a desk and no Western furniture at all. Only the crucifix mounted in the tokonoma, the decorative alcove that normally showcased pieces of Japanese art, hinted at the room’s foreign occupant. Although the Jesuit mission had purchased the house from a Japanese family two years before, in the spring of 1563, Father Mateo lived as a Japanese and had permitted little change.

Father Mateo crossed the floor, slid open the door, and stepped into the central room beyond. The open room at the center of the house had a sunken hearth and tatami mats on the floor, and it served every purpose from parlor to family room and even church. Father Mateo turned right, toward the small entry chamber at the front of the house, and ran a hand through his dark brown hair.

He turned to look for Hiro.

The shinobi had disappeared into his own room, which shared a wall with the priest’s. Hiro couldn’t let anyone see him in assassin’s clothing. Moreover, a messenger would think it strange to find the household alert and about so early.