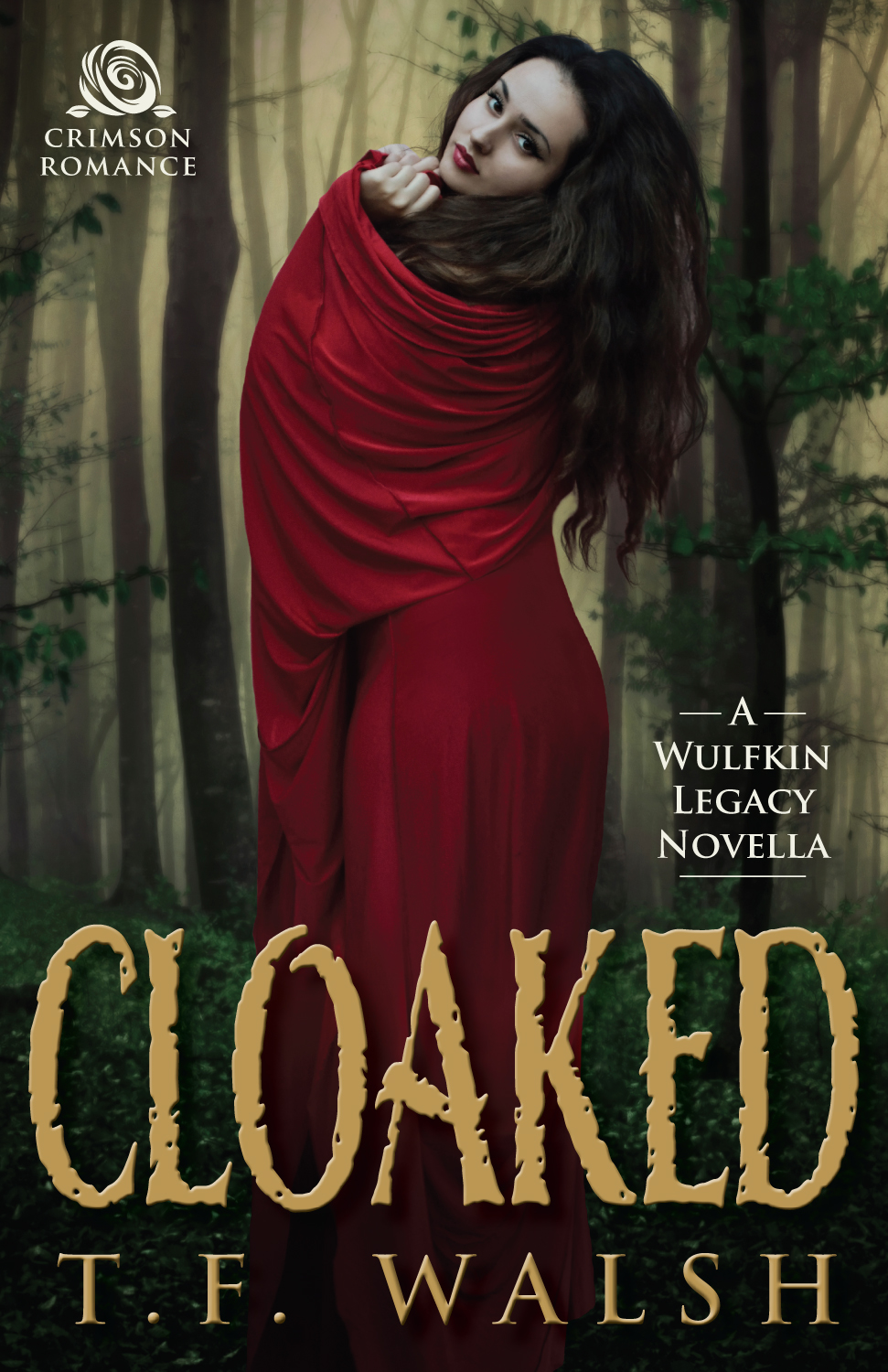 Damn bear. Leaving footprints on the outskirts of the forest, winding around the apartment blocks, and scaring locals for the past week. No wonder the cops had threatened to shoot him on sight today.

Sunrise wasn't far away; neither was my transformation from wolf into human, so I had to hurry. Romania's morning breeze wove through my fur, and the distinct dried-clover-and-grass scent screamed
bear
. He was definitely hereâalways just before dawn.

Not that I should care. Wolves and bears weren't the best of friends. But I'd seen the way humans made killing us a sport, and I couldn't stand to see any animal hurt.

Careening around the corner of the building, I halted and silenced my breaths.

Fifteen feet away was a frizzy, brown bottom sticking in the air. The bear that belonged to that butt balanced on the edge of an oversized trash can, head down inside, his scratching and grunting muffled.

A few steps closer, I snarled, the sound vibrating through my chest.

The bear jerked upward, a butter container sitting over his nose. He clacked his teeth and forced an expulsion of air, throwing the container off his face.

I backed up. Yep, this might be a funny moment on television, but not when you were the one facing the six-foot animal standing on hind legs.

He flopped back onto all fours and momentarily gazed back at his trash.

I have no plans to take your garbage
. A growl slipped past my throat, and I lowered myself, feigning attack posture.
Come on, boy, get out of here before it's too late
.
I stalked forward.

He swiped at me with a front paw, huffing.

I jumped back and circled him.

But he lunged suddenly, slapping the concrete ground several feet from me, and stood there, his mouth hanging open. He roared and made a pulsing sound deep in his throat.

I ran around him in a large circle, faster. His claws swatted at me, inches away, but once I was at his back, I leapt closer and nipped his hindquarters.

His bawling echoed, but I hadn't drawn blood, and it sure as hell was better than a bullet.

The crunch of leaves sounded, followed by footfalls, from around the building behind me.

I flinched and sniffed the air.
Humans.

The bear turned and ran away from the trash, from me, from the city, heading toward the forest. I chased after him to make sure he got as far away from here as possible.

He bolted faster, his paws hitting the ground with each pounce.

“The bear. And a fucking wolf?” a disembodied voice boomed from my left.

In the empty grassland between the apartment block and the woods, two police officers with rifles watched us. They were there to hunt the bear and broke into a run in our direction.

Fuck, this was bad. Really bad. I burst into the dense Transylvania forest behind the bear, trampling foliage and dried twigs. He'd swung right and already put distance between us. He was safe, but what about me?

Heading straight ahead, I sprinted across the forest floor, dodging low branches. I glanced behind me. Footfalls resonated, and the two figures raced my way.

Heavy breaths strangled my lungs as I bolted. The ground flew beneath me and fresh pine-scented air splashed over my face, promising escape. Except my heart was attempting to break free from my chest.

A shot was fired, and I scampered faster.

Ten pulse-wrenching minutes later, the police were nowhere in sight or smell range. That didn't mean they couldn't still be trailing after me.

The first ripples of a transformation into my human form crawled through my back legs. I scrambled up the hill, claws digging into the soil for leverage with each rapid lunge.

Through the woods, the first glimpse of the morning sun peeked over the horizon.

My body shuddered, and I stumbled forward, shivering uncontrollably as thousands of tiny bite-like nips swarmed across my flesh. I whimpered, and a long exhale gushed past my lips. The change was happening.

Fire catapulted through my veins, and a thunderous growl rolled free as my wolf retreated. My limbs stretched, and my bronze pelt vanished. Gone were the muted colors. The shadows no longer glowed with a gray hue. Now, I crouched on all fours in my human form with a chill snapping across my bare skin. The full moon had come and gone too fast, along with my forced change into a moonwulf. It happened once a month. Unlike other moonwulves, I had the ability to control my wolf when I turned. No being locked up for me, and I thanked the moon goddess for her blessing to run wild in the woods, to release my wolf, and be one with nature every full moon. On the other days, I remained a regular human.

I staggered upright, rubbing the cold from my arms and shivered.

Hopefully I'd put enough distance between the police and me. The Animal Research Institute lay over the hill. So much for reaching it before sunrise and any of my coworkers arrived at work. No one knew about my wolf side, and unless I intended to break a massive pack rule that could get me killed, it would remain that way.

As I sped up the slope, the frozen earth and foliage pinched the soles of my feet. Working at the institute had its perks, including a spare set of clothes tucked away for situations like this. Keeping the humans clueless of my kind's existence had been drilled into us at birth, or as in my case, the moment I joined my pack family at a young age.
Hmm
, maybe stashing a set of clothes in a tree trunk would work better in an emergency.
Mental note for next month.

The winds carried an icy bite, so I ran. With my chin tucked low, I spotted the purple berry juice staining my toes. Stretching my fingers out revealed the same dark crimson in the corners of my nails. Overnight I had devoured so many wild berries, I was surprised my whole body hadn't turned violet.

Most of my day would involve caring for bear cubs, so I'd blame my stained fingers on feeding them berries.

Through the trees, the shadow of the institute loomed.

Except, blue and red lights throbbed from the far side of the building, glowing brighter through the morning dimness. I froze on the spot. Had they seen me coming this way in my wolf form? A naked girl in the woods would also definitely attract attention.

If I retreated, it meant sneaking into the city without clothes. Not an option.

I crept toward the back of the building, away from the flashing lights, and prayed no one saw me. Approaching several trash cans, I tilted the largest one on its side and reached for the key I'd taped to the underside the previous night.

The crunch of dried leaves sounded from around the building ahead of me, and I halted. Footfalls closed in.

With the key clenched tightly in my fist, I scrambled back into the woods. No time to unlock the door and dash inside. Throwing myself on the ground behind a huge, thick bush, I watched as two uniformed officers stepped into view.

My breathing quickened as I lay there freezing, a sharp object stabbing my belly. The police scanned the area with a flashlight. They tried the back door of the building, which was locked, and inspected the windows. Standing several paces from my hiding spot, one of the men examined the bins, inside and underneath. He leaned over and picked up something from the lawn near the bin.
What did he find?

Despite the cold, sweat beaded on the nape of my neck.

When the officers beamed a light in my direction, I ducked and held my breath. Their footsteps receded, and I waited awhile to see if they returned. They didn't.

Rising from my hiding place, I dusted off the dead leaves sticking to me in embarrassing places and sprinted to the back door. Once inside, I slipped into a dark corridor. Voices floated on the air, and my nerves stood on end as I rushed to hide inside my office.

Edging the door shut behind me, I crossed the dark room, kicking a wastepaper bin in the process. A dull thud echoed.
Crap
.

From the bottom drawer of my desk, I seized the spare clothes and shoes.
Hurry up.
I tugged on my underwear and tight pencil skirt.

A creak outside the room.

I dropped to my knees and rushed to put my bra and blouse on, fastening the front buttons at ultra-speed, my hands shaking. Hopefully, the buttons were in the correct holes.

I slipped into heels, immediately cursing that decision, and raked my fingers through my shoulder-length hair, hoping it resembled a smidgen of normalcy. No noises outside. I snuck out the back door, locking it behind me. The cool breeze of the woods washed away the perspiration but left me chilled.

I'd only been living in BraÅov for a couple of months as part of the tradition of
rohang
, my one year amongst humans and away from the pack. If I could get through this yearly ritualâand that meant not drawing police attentionâI'd be considered a full-fledged pack member ready to be taken seriously and allowed to participate in pack hunts.

Entering into the woods, I took each step slowly to avoid tripping, and soon enough, I reached the dirt road leading up to the front of the institute. Lofty pines stood, crowded in every direction. Their fresh morning scent and the swaying wind calmed me.

Spotting a bulging gap at the front of my blouse from a button I'd missed, I tugged it down.

“Hey,” a uniformed officer from up the road called out.

I spun away from him and fiddled with the buttons.
Wonderful, the police will think I can't even dress myself or I was making out in the woods. Maybe he was the one who chased me from the city.

“Turn back around, slowly,” the male's husky voice called out.

With the top of my blouse wide open, I rushed to fix it as footsteps closed in. Now buttoned up correctly, I spun around to face the officer and planted a smile on my face. He halted several paces away.

“Hi there.” Damn my shaky voice.

“Where did you come from?” The young officer had a faint wisp of a mustache and appeared about fourteen years old. He scanned the grounds behind me.

“I work there.” I pointed at the institute.

He stared at my fingers momentarily. “Where's your car?”

“In the freezing cold in heels and without a coat? And why are your fingers purple?”

Hawaiian Holiday: Destination Desire, Book 2 by Crystal Jordan
A General Theory of Oblivion by Jose Eduardo Agualusa
Honorary Surgeon by Marjorie Moore
Objects Of His Obsession by Jae T. Jaggart
Breathers by Browne, S. G.
Ready or Not by Meg Cabot
A Sunday at the Pool in Kigali by Gil Courtemanche
Loving Emily by Anne Pfeffer
Falling Into Bed with a Duke (Hellions of Havisham) by Lorraine Heath
Tempted by von Ziegesar, Cecily