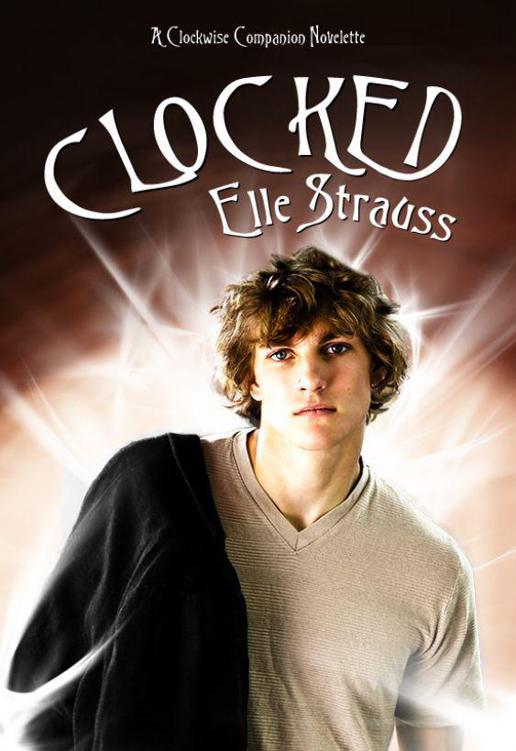 to the Clockwise Series

This is a work of fiction and the views expressed herein are the sole responsibility of the author. Likewise, characters, places and incidents are either the product of the author’s imagination or are represented fictitiously and nay resemblance to actual persons, living or dead, or actual event or locales, is entirely coincidental.

My girlfriend went all loopy about the idea of buying a new dress for the Fall Dance and somehow she talked me into going into Boston to dress shop with her. I should’ve gotten the boyfriend of the year award for that. And truth be told, now that we were at the dance, she looked hot. The green dress she
finally
picked out made my heart stop, so the agony was totally worth it.

Someone went to a lot of trouble to deck out the gym. Streamers and a strobe light in the dark cavernous room gave off a cheap, eighties-disco, rip-off vibe. Not really my scene. If I had to be here, I just wanted to hang with the guys by the punch bowl. Tyson, Dylan and Josh were all dressed like me, uncomfortably in a suit and tie. We’re definitely more at home in sneakers and sweat pants. Tyson’s white teeth practically glowed against his dark skin, his smile wide like he was enjoying the view. All the guys had that happy look. Could be something they put in the punch. Could be all the pretty girls hanging around, flirting.

I felt a tug on my suit jacket sleeve.

“
There you are, handsome,” Jessica said, grabbing my hand. “Let’s dance.” She batted her eyelashes, her full, lipgloss laden lips smiling wide. I smiled back and followed her onto the dance floor.

I’m not the best dancer in the world, but really, dancing is just another kind of sport and I was pretty good at a lot of those. I managed okay. Jessica had a strong need to touch me, even though it wasn’t a slow dance. My arms, my waist. Not that I was complaining.

I’m not exactly sure just how we ended up becoming a couple. I’d moved to Cambridge with my folks half way through the year. Apparently Jessica had a boyfriend when I arrived, but I didn’t find out about that until later. She came on pretty strong. In fact the female populace at Cambridge high acted like they’d never seen a guy before. I was what you’d call “new meat” and all that estrogen floating my way was a little more than alarming.

Jessica had staked a claim and I’d just gone along with it. She was cute, if not a little possessive, but she did the job of holding the female tide back until the novelty of my arrival wore off. I didn’t see us staying together past my upcoming graduation. She was more of a place holder, but at least she was easy on the eyes.

Jessica spun around me and giggled, and though I’d rather be at home watching a football game on my flat screen, I was glad she was having a good time. Or, at least she was until something caught her attention across the room. Her lips zipped together and her green eyes narrowed into slits. I’d seen that look before. That was the “you’ve crossed Jessica Fuller and now you’re going to pay” look.

I shot a glance in the direction of her glare. Jessica’s target seemed to be the tall girl standing with another girl against the wall. She had long dark curly hair pulled back off her face and a yellow dress that stopped at her knees. When I looked closer, I remembered she was the girl from football practice. She was there watching, but then something weird had happened to my Tom Brady football when she suddenly jumped up and caught it. It still lay flattened on the shelf in my room beside my trophies and ribbons.

What did Jessica have against her, anyway?

The song ended and I started back to the guys by the punch bowl.

I gave into her pout and pulled her in close for the slow song that started. She was a lot shorter than me, and her “strawberry blond” (her words not mine) head pressed against my chest, too low for me to rest mine against hers. After awhile I got tired of staring at all the other pubescent couples and let out a breath of relief when the song finally ended. She held on tight when I tried to pull away.

“
Jess.” I was starting to feel suffocated by her already and we’d only been here for half an hour.

“
Well, if you don’t want to dance with me,” Jessica huffed as I left her on the dance floor, “I’ll just find someone who does.”

“
Nate, dance with me,” Tyson mimicked. I punched him in the arm and he feigned deep hurt.

Josh sighed. “Now why didn’t she ask
me
to dance? I would totally let her press her hot bod next to mine.”

I flashed him a look of warning.

“
Just kidding, bro,” he said, looking behind me. All the guys were.

I turned in the direction of his gaze and saw what the guys stared at. Jessica had that sophomore, what was his name? Craig? In a body hold. She ran her hands up and down his arms. The boy’s face was cherry red but had a look of immense glee. It bugged me how she liked to tease the poor guy.

“
You gonna let her get away with that?” Dylan said, laughing. “We know who wears the pants in your relationship.”

“
No, really, man,” Josh said running a hand through his red curls. “She’s got me blushing.”

“
You know what you need to do, man,” Tyson said. “Dance it up with another girl.”

“
Nah,” I said tucking my fists into my jacket pockets. “Let her have her fun.”

Tyson persisted. “You’re letting your girl walk all over you.”

“
You are, man.” Tyson jutted out his clean shaven chin. It was weird to see him without the scruffy shadow. “I dare you to ask another girl to dance.”

For some reason my eyes darted to the tall girl with the curly hair, still standing by the wall, which was a really dumb thing to do, since they latched onto that slip up like vicious dogs.

“
Isn’t that the girl who killed Tom Brady?” Josh said.

“
Ask her,” Tyson said. “Jessica doesn’t like her. It’ll drive her crazy.”

How did he know Jessica didn’t like the tall girl? She must’ve been working her mean-girl schtick on her when I wasn’t looking.

Yeah, maybe I
will
ask her. Serve Jessica right. “Okay, I’ll do it.” The guys hooted and Tyson patted me on the back.

I started toward Casey and in two seconds, her friend was giving her the elbow nudge. At first Casey didn’t see me coming, but when she did, I thought her eyes were going to pop out of her head. It was all I could do to keep from breaking out in laughter.

I kept my cool though and when I reached her I said, “Would you like to dance?”

She took so long to respond, I thought she might say no. I’d never hear the end of it from the guys if she’d turned me down.

I hadn’t considered what the next song might be and as luck would have it, it was another slow one. I couldn’t help but steal a quick look at Jessica as I pulled this much taller girl close. The expression on Jessica’s face could start a house on fire and for some reason her displeasure made me chuckle.

I felt Casey quivering as we swayed to the beat and I wondered if she’d ever danced with anyone before. I leaned back a little to get a better look at her. She actually had a really attractive face, pretty eyes. I’m not sure why I hadn’t noticed before.

I heard myself say, “You look nice, tonight.”

She almost gasped, like she’d never heard a compliment before. Well, she did a good job of hiding her looks with the way she dressed most days, and concealing her face behind a mass of curls.

She opened and closed her mouth like a fish and her eyes widened with horror as if she’d just witnessed a murder. I was about to ask her what was wrong, when suddenly I felt a blast of light and dizziness that almost dropped me to my knees. I squeezed my eyes shut against the pressure, wondering if I was having a stroke or something, which sometimes happens to athletes. When the vertigo passed, I opened my eyes.

And found myself standing in the middle of a forest, hit by a wall of fresh air compared to the stuffy gym I was in just a second ago. Wait, how did I get here?

I felt frozen to the spot but Casey was spinning around on the grass and shouting to the sky, “You’ve got to be kidding! As if things aren’t bad enough, you have to let him come along?”

“
What just happened?” I said. “Is this some kind of practical joke?”

“
Okay, guys, come out now.” I peered through the trees, searching for signs of Tyson or Josh, expecting one of them to jump out of the shadows in a laughing fit.

But nothing. Just silence. I felt a bit panicked but kept it cool because of Casey. She was obviously as freaked out by this as I was.

Either that or she was a fantastic actor.

“
Did they put something in my punch?”

Instead of answering me she moaned, “Oh, no.”

What was wrong with her shoes? And maybe it was just me but I thought we had bigger problems than her shoes. She took off one sandal. Maybe her feet hurt?

But then she started smacking it against a large rock. Had she lost her mind?

A Face Like Glass by Frances Hardinge
The Beast of Maug Maurai, Part One: The Culling by Roberto Calas
A.R. Winters - Valerie Inkerman 01 - Don't Be a Stranger by A.R. Winters
Clash of Empires by Brian Falkner
Rewriting History by Missy Johnson
Dying for Millions by Judith Cutler
The Damsel in This Dress by Stillings, Marianne
Forget Me Not by Blue, Melissa Lynne
Voices in Our Blood by Jon Meacham
La cinta roja by Carmen Posadas