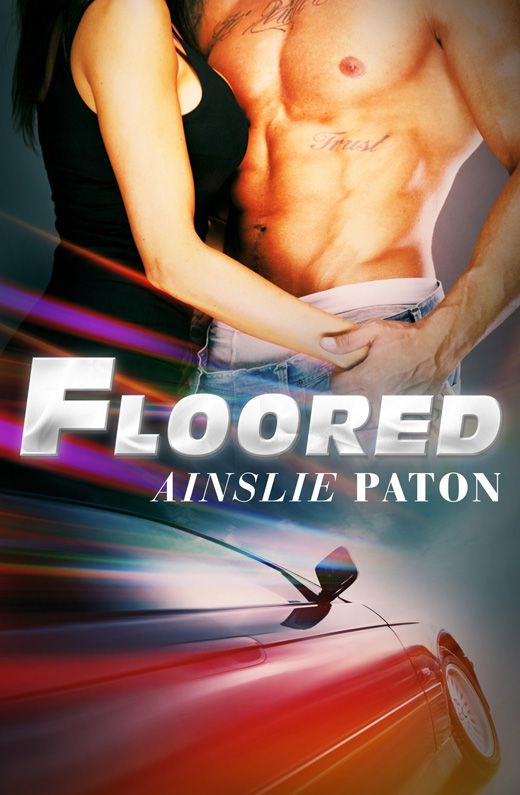 They’re a car crash waiting to happen…so why do they keep crashing into each other?

From the moment Fetch gets knocked off his Harley, crawls into Driver’s car and offers her an obscene amount of money to drive him from Sydney to Perth — no questions, no names, no chit chat — they’re stuck with each other. By the time they arrive, they’re stuck
on
each other.

It’s lust at full throttle, with no seat belts. It could be more, but he’s a fake and she’s a liar. They’re both neck deep in crime, and only one of them is on the right side of the law.

Ainslie Paton is a corporate storyteller working in marketing, public relations and advertising. She’s written about everything from the African refugee crisis and Toxic Shock Syndrome, to high-speed data networks and hamburgers. She writes cracking, hyper-real romances about strong women and the exciting men who love them.

She’s the author of Grease Monkey Jive, Getting Real, Detained and other stories.

Ainslie blogs at:
www.ainsliepaton.com.au.
You can sometimes find her on Twitter @AinsliePaton when she should be writing.

Floored is based on the concept of identity and deception and the fact you never quite know anybody fully.

It was possible because the members of Club BTA were behind me, giving me confidence I could do this and beating up on me till I did. A huge thanks once again to Clan M and our correspondent in Paris. You guys deserve every sunset.

Neighbourhood Watch wore washed-out blue plaid pyjamas under a towelling dressing gown. He had old man brown tartan slippers and thick-framed glasses. He had a comb-over starting at a side part, a spit off his left ear. You could see pink scalp through greasy greying strands. He smelled of spilled hot milk and his face was as red as the tank on Wacker’s chopper.

Fetch stood on the front verandah with him. Better he did this than one of the other guys, or it might get real goddamn nasty. It wasn’t Neighbourhood’s fault the Black Pariahs had moved next door. But it was probably the reason for the bags under his eyes, and the depreciation of his neat, triple front, cream brick, three bedroom home.

But no shit, Neighbourhood Watch was going to call the cops this time, unless…

Fetch put his hands out in a placatory gesture, smoothed his accent and ditched the slang. Not that a slightly less ocker tone or the Queen’s English was going to make the difference. He wore a fist full of silver skull rings, and Maisy had thought it was funny to put little plaits in his beard. Shirtless except for the leather vest and the tatts, he didn’t exactly look the picture of conciliation. He looked like ‘lock up your daughters’. But he was the best option Neighbourhood had of not wishing he’d had a second cup of Horlicks, plugged his ears, and gone to bed.

“It’s the middle of the night. Some of us work for a living you know. I’ve had enough of this. The drugs, the loud music, the profanity.” Neighbourhood pointed out to the lawn in front. It was a wasteland of sand, weed, dog shit and bindies. “Last night there was a young woman out there topless. This is a good family neighbourhood but you people are trashing it.”

“Hey, I understand.” Better than Patrick Thomas, upstanding citizen of Robinson Street, Meadowvale could ever credit. Fetch knew if Neighbourhood didn’t hurry up and take his jammies and his moral outrage back next door things would get real ugly, real quick.

“You frighten my dog, Betsy.”

Neighbourhood was lucky Wacker hadn’t barbequed Betsy and served her sliced thin with sweet chilli sauce. “Yeah, sorry about that.” Fetch got up close to poor Patrick. Steel caps to slippers. All the better to intimidate him into going the fuck home. “You see the thing is, Mr Thomas.” It always amused him how threatening being polite could be when you looked like you were fresh out on parole. “It’d be better for everyone if you went home and forgot about all this. It’d be better if you didn’t come here again. She’s a cute dog, Betsy, and your daughter, Madeline, isn’t it? Yes. She’s cute too. You want it to stay that way, right? So the best idea is, you stay on your side of the fence and you don’t worry about what happens over here.”

Neighbourhood was desperate to back up, bolt down the verandah steps and run next door as fast as the dangling crutch of his jamma pants would let him, but his sense of outrage kept him standing there. Or he’d forgotten how to use his legs.

“Do you understand what I mean, Mr Thomas? You see, what no one wants, least of all your good self, is the cops paying number 10 Robinson a visit.”

Neighbourhood went to object, his mouth flapping open and bobbing, then thought better of it. He backed off, turned tail and went down the walkway to the gate, opened it, went through. Then he protested. Before he went back to number twelve, he left the gate open.

Fetch turned to see Wacker in the doorway. All 6ft 4 inches of him. With an impressive girth to match his imposing height, and the evil glitter of his beady black, miss nothing, eyes.

“You lonely, Fetch? You tryin’na make new friends?” Wacker braced his dinner plate sized paws on the doorjamb. “I thought I told you. We keep to ourselves. We especially don’t want fuckin’ nosey neighbours in our business.”

“I know what you was doing. You was having a little chat.” Wacker advanced. All the better to intimidate. “You’re a bit dim, aren’t you boy? If the Reds hadn’t vouched for you, I’d be wondering whether you can piss standing up. Now you do as you’re fuckin’ well told. Get back in there and make nice with my Maisy’s cos. She’s an ugly, fat little porker,” he gave a beery laugh, “but she’s family, and everyone has to do their part.”

Fetch ducked his head and moved past Wacker, eyes on the floor. He didn’t need to be called out over this. His ribs were still sore from the last beating he’d taken. A visit from the boys in blue would be more welcome. And it was two in the morning, and some people did have to work. So if he could find cousin Nikki and get her to slow dance to something less Marilyn Manson and more Hannah Montana, it would mean the neighbourhood could sleep better, and he’d have survived another day as a patch member in the employ of the infamous Stephen Wakenheim, vice-president of the country’s newest and best organised outlaw motorcycle gang. Drug manufacturer, race fixer, cyber criminal, pimp, den of iniquity landlord, and all round good guy. If you liked the idea that he’d done two stints in Long Bay and only last week knifed his own brother to within a heartbeat of martyrdom.

Jesus, wouldn’t Mum be proud of her baby boy now.

At least the hapless buck chucked in the gutter. It was so hard to get the smell of vomit out of the Statesman. Both times Caitlyn had to do it, she’d scrubbed for hours and the stomach churning scent of sick hung around for days.

Story of her life. The unfortunate, lingering smell of something gone bad.

Customers liked new car smell. It was a status thing. Part of the reason they liked hiring a car instead of jumping into a taxi. It went with the uniform she wore: a crisp white long sleeved shirt and fitted black skirt and jacket, with a stiff peaked black cap which she tucked her hair under, and low-heeled shoes. No jewellery, and just a lick of a neutral tone lipstick. All improvised because she hadn’t been able to find a supplier of uniforms for female chauffers other than fancy dress hire shops and websites, who made them way short, way tight, and way pornographic—not anything remotely like what a professional driver should wear.

Though she was kidding herself about the professional driver thing, the least she could do was look the part. She could drive, like everyone else, and had a perfectly clean, accident free record, but that was more fluke than good management. It only meant that at twenty-seven she hadn’t spent too many years accumulating miles, being exposed to other bad drivers, and raking up incidents.

At least in the usual manner.

It was the uniform for all its ‘melt into the background’ blandness that had gotten her into trouble tonight. When she arrived to collect them from the club, Hapless, the buck, and his mates Hopeful and Hardly were convinced she was part of the surprise strip show. Only because Hapless’ father was sober was she saved from being seriously manhandled before the real stripper showed up in a latex nurse’s uniform and used the Statesman as a prop in her dance of a thousand pelvis grinds. That was before the throwing up started, and well before she dropped Hapless and his entourage to their hotel.

It was the first time she’d been mistaken for the stripper—
what were they thinking
—though wandering hands were a regular occurrence. But enough was enough. First thing tomorrow she was buying a pair of plain black tailored trousers. The skirt left her too vulnerable; sent the wrong signal.

Story of her life. All the wrong signals and practice perfect susceptibility.

Now all she wanted to do was sleep, because tomorrow she was booked for another buck’s night and had to do this all over again. The picking up, putting down and waiting, the intense politeness in the face of drunk, drugged, and plain old boorish behaviour. Plus the abuse. Let’s not forget the abuse. Which ranged from the benign—‘Oh fuck, we have a woman driver’, to the more humorous, ‘It’s a chick. We’re all going to die’.

At least in trousers instead of a skirt she’d avoid hot hands on her skin. After Justin she didn’t want anyone touching her skin. For a long time. Maybe forever. She was off men, and being touched, at least until she was sure she was finally safe from Justin; he moved to Silicon Valley or a small, bare cell—or both. Preferably both.

Morning was a reality when Caitlyn put her key in the door and let herself in. The flat smelled stale like mothballs. She’d thought being above a dry-cleaners would make the small, old, studio apartment smell all sorts of chemical clean. But no—just nose itching naphthalene. She thought she’d be used to it by now. Six months. Didn’t they say you could get used to anything in six weeks? Well, not anything. It was going to take a lot longer to get used to feeling so deeply humiliated, and maybe forever to get over feeling so unalterably stupid, and the whole ‘sins of the father’ thing was too much to contemplate. And the need to keep looking over her shoulder…

It was better not to think about that. That was just a new fact of life.

Taught by Jenna Owens
Ghost's Treasure by Cheyenne Meadows
Romano and Albright 01 - Catch Me If You Can (MM) by L.B. Gregg
Never Love a Scoundrel by Darcy Burke
The Lion's Den by D N Simmons
In the Dark by Mark Billingham
A Long Way to Shiloh by Lionel Davidson
Torrid Affair by Callie Anderson
Eclipse by Book 3
Must Love Wieners by Griffin, Casey