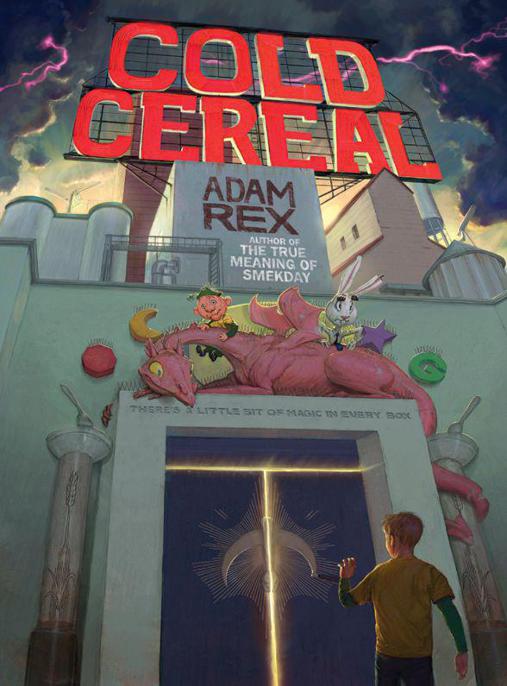 More than ever, for Marie

And Now a Word from Our Sponsor

AND NOW A WORD FROM OUR SPONSOR

Is this any way to start y’r day?

Top o’ the mornin’ to ye! Time to put some burlap in
yer
lap!

Part of this nutritious breakfast!

from the good folks at Goodco.

There’s a Little Bit of Magic

In the busy airport, baggage turned slowly on a carousel. A crowd of people stood around it, arms crossed and waiting, some of them staring at a silent television bolted to the ceiling. The closed captioning at the bottom of the screen was seven seconds late and often misspelled, so though the newscasters were back and reporting on the death of billionaire Sir Peter Humphreys, the words still read:

THE GOOD FILKS AT GOODCO//

THERES A LITTLE BIT OF MAGIC IN EVRY BOX.

The people were passed by an airport employee in a stiff airport shirt carrying a cage that couldn’t ride on the baggage carousel because there was something living inside.
People stole glances at the pet carrier in his hand and said “Cute, a little dog” and “Look, somebody’s dog was on the plane.” Then he set the cage down by a cluster of unclaimed bags and went into an office for some paperwork.

A woman with a tight ponytail that hoisted her face into a permanent, painted grin bent in front of the cage.

“Aw, hewwo, widdle Chihuahua,” she said. “Hewwo.” Then she rose to go wherever it is people like that come from.

Next at the cage door was another woman, wearing a sweatshirt decorated with an appliqué hot dog.

“Oh, Martin!” she called over her shoulder. “It’s a dachshund! Just like the one I wanted at that pet store! Come see! Martin!”

When it became clear that Martin was not going to come see, she left, and immediately another face appeared. A man’s. He peered into the pet carrier, looked over his shoulder in disbelief at the hot dog woman, then back in the carrier again.

The tiny little man in the cage, the tiny old man in a red tracksuit with a face like a rotten apple, brightened and turned to the door.

The wide face only stared back.

“Thing is, see, you somebody else’s little man. You ain’t my little man. Maybe you supposed to be in that box.”

“
Please
, lad,” the little old man pleaded. “I’ve been kidnapped. I’ve been in this chicken coop for
three days
. I’ll… I’ll make it worth your while. Riches. Gold! Anything that’s in my power t’ give—”

But the man outside the cage was already getting up. As he stood he said, “None of
my
business,” and walked away.

The caged man pressed his face against the cold door and watched him go. Then a little fist clutching a Barbie doll struck him in the nose, and he withdrew to the back of the carrier.

“Puppy!” screeched the girl with the Barbie as her face filled the door. “PUPPY!”

“I must be in New York,” the little man said. “I always hated New York.”

“Lucky,” said Polly at breakfast. Scott looked up from his cereal and frowned. It was just the two of them in the kitchen, but “lucky” seemed like such an unsuitable word that he was tempted to see if someone was standing behind him.