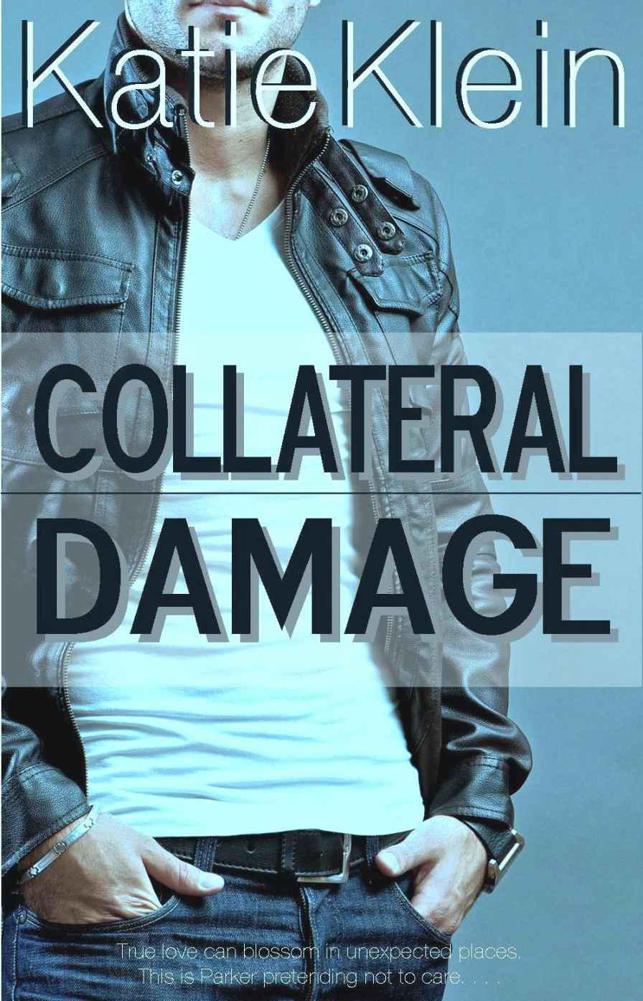 A companion novel to CROSS MY HEART

**Though not a sequel to the story, the author

This story is a work of fiction. Names, characters, places, and incidents are either products of the author's imagination or used fictitiously. Any resemblance to actual events, locales, or persons, living or dead, is entirely coincidental.

No part of this publication can be reproduced or transmitted in any form or by any means, electronic or mechanical, without permission in writing from Katie Klein.

True love can blossom in unexpected places. This is Parker pretending not to care. . . .

Parker Whalen and Jaden McEntyre are a wrong fit from the start. Jaden is driven and focused, Harvard Med School within reach. Parker has a past—a reputation—and the rumors about his mysterious habits abound. So there’s no reason why, when they're assigned to work together on a project in English, they should discover they have anything in common, or even like each other, and they definitely shouldn't be falling in love.

What they have? It isn't real. Because the truth is, Parker Whalen is a liar. This has never mattered…until now. Because lying to someone you care about—someone who matters, someone who believes in you—that's when people get hurt. And Parker is about to hurt Jaden in the biggest way imaginable.

I don't lie because I
want
to lie. I lie because I
have
to lie. It's part of the territory—a side effect of what I do. Like the dizziness that comes with the heart medication. The numbness that may occur with the use of an inhaler. You just have to decide: die of heart failure or suffocation, or deal with a little nausea and tingling.

Some days it doesn't bother me. Other days I wish I had a normal job, like my friend Erik who works in a Hamilton high-rise as a medical billing specialist. Or even Mike Rusch—Rusch to his friends. Rusch and I graduated training together. He spends most of his day parked along Highway Fifty-eight waiting for some sucker to come along. A sucker who's late for work. Late for a meeting. Late for an appointment. The reason never matters. Not really.

It's scary how good I am at it—that lies fly off my lips without my even thinking about them.

Sometimes it's not even a direct lie. It's a lie by omission.

She was
never
supposed to see that ring.

But she did, and then there was the jumping up and down and the screaming and God...the screaming. I never got down on one knee. Never officially even
asked
her. But I didn't
not
ask her.

Callie sighs, threads her arms around my neck, presses her warm body against mine. It's been four years. Four years of bodies pressing together.

"I'll miss you," she murmurs, whispering into my ear, fingernails grazing my hairline. I breathe in a trace of vanilla and jasmine, the perfume I bought her for Christmas, and pull her closer.

We hold this embrace for what feels like forever and no time at all, standing on the sidewalk just outside her townhouse, already aching for one another. The streetlights cast a strange, pinkish glow over the buildings and the shrubs lining the walkways and the cars parked in the lot. My breath smokes in the frigid air. I already can't feel my nose.

It's going to be a long ride home.

I tip my head and study the starless sky, half expecting a flurry or two—the first snowfall of the season.

But I know better.

"If you have a free night this week," Callie begins, pulling away from me, "maybe we can meet halfway."

"It's only a few more months," I promise.

"Yeah." She straightens the collar of my leather jacket and fixes her eyes on mine—those brown, puppy dog eyes on the verge of tears.

I bend low and kiss her softly on the lips.

"I love you," she says, smiling, gazing at me from beneath her black lashes.

The reply comes easily, practiced, uttered a thousand times over: "I love you, too."

I swing my leg over my motorcycle, latch the strap on my helmet. The engine rumbles, roaring to life. One final wave and I'm off, leaving Callie standing on the step of the townhouse we share on weekends and holidays, my grandmother's ring on her finger.

It was my mom's idea.

I was passing through the hall, minding my own business, when she called me into her bedroom and handed me the gray jewelry box containing the engagement ring my grandfather had given my grandmother on her twentieth birthday. The ring took my breath away. It was beautiful—a large, round diamond surrounded by a dozen or more smaller diamonds in a platinum setting.

That's what my mom called it.

My grandparents died more than a decade ago. My grandmother died first. She had a stroke. They put her in the hospital and then a nursing home. She never recovered. My grandfather started to deteriorate not long after she died. He grew thinner. Didn't go out as much. Rarely smiled and never laughed. Within nine months he was gone, too. It was a shock to everyone who'd seen him with my grandmother. He stayed with her, by her side, strong until the day she died.

He went downhill fast
, is what everyone said.

Whenever Mom talks of them, it's always about how in love they were—how she knew that after the first one passed, the other would quickly follow. It seemed impossible for one to go on living without the other.

Bowles, Jan - Love Slave to the Sicilian Billionaire [Guilty Pleasures 4] (Siren Publishing Everlasting Classic) by Jan Bowles
A Wedding Worth Waiting For by Katie Meyer
Safer With You by Trisha Madley
Ferryman by Claire McFall
Sons and Lovers (Barnes & Noble Classics Series) by D. H. Lawrence
Timberline Trail by Lockner, Loren
Wings of Tavea by Devri Walls
Man of Mystery by Wilde, L.B.
All Fired Up (Kate Meader) by Kate Meader
Places Left Unfinished at the Time of Creation by Santos, John Phillip