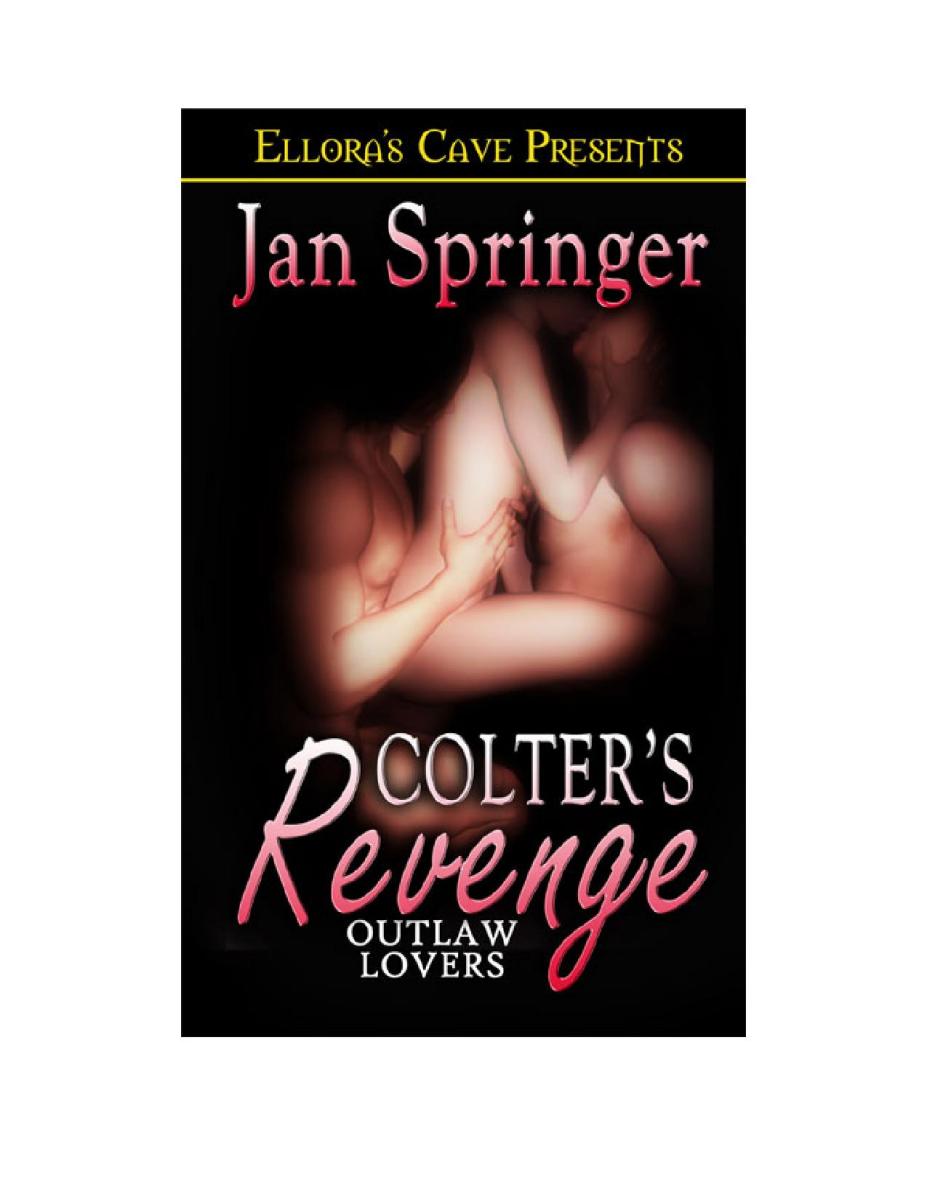 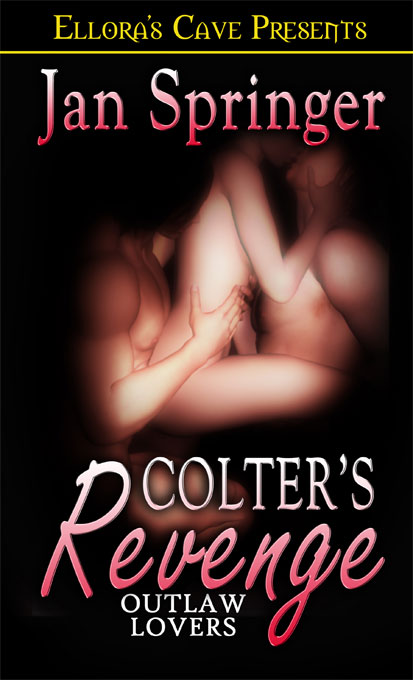 This book may not be reproduced or used in whole or in part by any means existing without written permission from the publisher, Ellora’s Cave Publishing, Inc.® 1056 Home Avenue, Akron OH 443103502.

The following material contains graphic sexual content meant for mature readers. This story has been rated E–rotic by a minimum of three independent reviewers.

E-
rotic
love scenes are explicit, leave nothing to the imagination, and are high in volume per the overall word count. In addition, some E-rated titles might contain fantasy material that some readers find objectionable, such as bondage, submission, same sex encounters, forced seductions, and so forth. E-rated titles are the most graphic titles we carry; it is common, for instance, for an author to use words such as

“fucking”, “cock”, “pussy”, and such within their work of literature.

X-
treme
titles differ from E-rated titles only in plot premise and storyline execution. Unlike E-rated titles, stories designated with the letter X tend to contain controversial subject matter not for the faint of heart.

For Mary Moran—a wonderful editor and a great friend.
And for my nephew Colter.

Thank you both for all your support!

“How’s it feel to have two cocks buried inside you, Starry Eyes? Does it live up to your ménage à trois fantasies?”

“She’s at a loss for words,” Blade chuckled from behind her. His hard chest pressed firmly against her back. Steel-like muscular arms encircled her torso as his long, eager fingers busily pulled and squeezed her sensitive nipples until she cried out from the pleasure-burn.

Colter’s gaze met hers. In the depths of his green eyes she recognized the fierce love. The raw hunger for her. The look always made her catch her breath and her heart race.

The last thing she’d ever expected was for the ruggedly handsome soldier Dr. Colter Outlaw to take her seriously when she’d shyly answered his question a couple of days ago regarding what her number one sexual fantasy would be. She’d admitted it was a ménage à trois.

Having only met him several weeks ago when he’d come to live at the mansion and attend to the general after he’d suffered an almost fatal gunshot wound, she’d been shocked at the sizzling attraction that had quickly cumulated between her and the doctor. With the general temporarily out of commission, she’d had a meager strand of freedom available to her, enabling her to talk with the doctor about the advances in the medical profession concerning the X-virus.

He’d been surprised when she’d admitted she’d wanted to train to be a gynecologist back in the States, but had limited telling him the entire truth of how her stepbrother Dr. Blakely, the man who’d actually invented the original X-virus that had killed so many women, had sold her to the Army because she’d rejected his advances. The general had purchased her and she’d become his sex slave in Iraq. The soldier 5

doctor didn’t need to know the horrors of her past. It would only put a damper on things. Especially now that she was enjoying the best sex in her twenty-five years of life. At first, she’d been stunned when earlier that evening the general had left the compound for the first time in weeks. Colter had also disappeared for a couple of hours only to reappear with the awesomely tall, darkly tanned stranger named Blade. Quite a looker, almost too beautiful for a man to be. He had sensitive eyes the color of chocolate pudding and short golden blond hair.

The sexual hunger brewing in Blade’s eyes had just about made her come on the spot. It hadn’t been hard to allow both the stranger and Colter to make her fantasies come true.

When she’d been sold into slavery, she’d learned quickly to live on the edge. To take each day as if it could be her last. And that’s exactly what she’d been doing since the soldier doctor had come into her life.

“We can get you out of here, Starry Eyes,” he was whispering so low she could barely hear him.

She winced at the pleasure-burn as Blade’s hard erection slammed deep up inside her ass again.

As if disappointed with her answer, Colter’s thrusts became harder, harsher, more desperate. More arousing. Blade seemed to sense his friend’s change in mood and became gentler with his own seductive plunges.

“He’ll know you took me. He’ll kill you both. God! Don’t talk about this now.”

she would ever be able to go back to her life of sadistic sex without orgasms with the general.

“We’ll all be safe,” Colter ground out between clenched teeth. She could feel his body tightening, sensed his time was near. Felt the blossom of yet another violent climax taking root deep inside her belly.

She hated the general more than anything and she wanted to be with Colter so badly it hurt. Wanted him to take her from this horrible life of being a sex slave to a sadistic American general.

But the last thing she wanted was for Colter, or anyone else for that matter, to be hunted down for stealing her. Deep inside her heart she knew she would never be able to live the same way after her experience with this ruggedly handsome soldier doctor and his friend.

The orgasm snowballed. Excitement roared through her. Her fingernails dug painfully into her palms.

Oh, my God! This one was going to be the biggest of them all!

“Come with me, Starry Eyes. Please say yes.” The desperation in his voice, the excitement at the proposal of being free roared through her and tangled with the pleasure, snapping her hold on common sense.

The scent of their sex spun beneath her nostrils. The sounds of flesh slapping against flesh drifted past her ears and intermingled with the grunts and groans of the two soldiers.

She became lost in her carnal delirium. Barely felt the two thick cocks sliding in and out of her as both men frantically attained their own satisfaction. Panting for air, she held on for dear life as the sensual euphoria gripped her and dragged her under.

“That’s a hell of a way for a medical doctor to make a living.”

The woman’s familiar voice drifted through the late morning mist, making Dr. Colter Outlaw stiffen with anger. Elbow-deep in cold mud, he’d been working all morning on getting the tractor wheels unstuck from the field he’d been tilling. The last thing he needed was for his former S.K.U.L.L. chief and commander Bev White to show up and start throwing jokes.

“I’m finished with the Terrorist Wars, Bev. Get lost.”

“You know why I got it. A reminder never to trust you or S.K.U.L.L.,” he said, allowing the anger to brush through him. “Now you’d better make yourself scarce, Bev. The Wars are over. As far as I’m concerned, the special permission you had to hold rank over me doesn’t wash in this country. A woman alone has no rights in the States anymore. You could be Claimed right here on the spot. Lots of sexually starved men around.”

“Not that it’s any of your business, but I’ve got my minimum four husbands waiting right at your farmhouse. Your brothers and a certain pregnant lady are keeping them entertained so we can talk.”

Rare by Garrett Leigh
100% Hero by Jayne Lyons
Twisted Triangle by Caitlin Rother
Submitting To The Captain by Mina Carter
Witch for Hire by Conneely, N. E.
William The Outlaw by Richmal Crompton
100% Wolf by Jayne Lyons
Safer With You by Trisha Madley
The Stair Of Time (Book 2) by William Woodward
Put a Lid on It by Donald E. Westlake