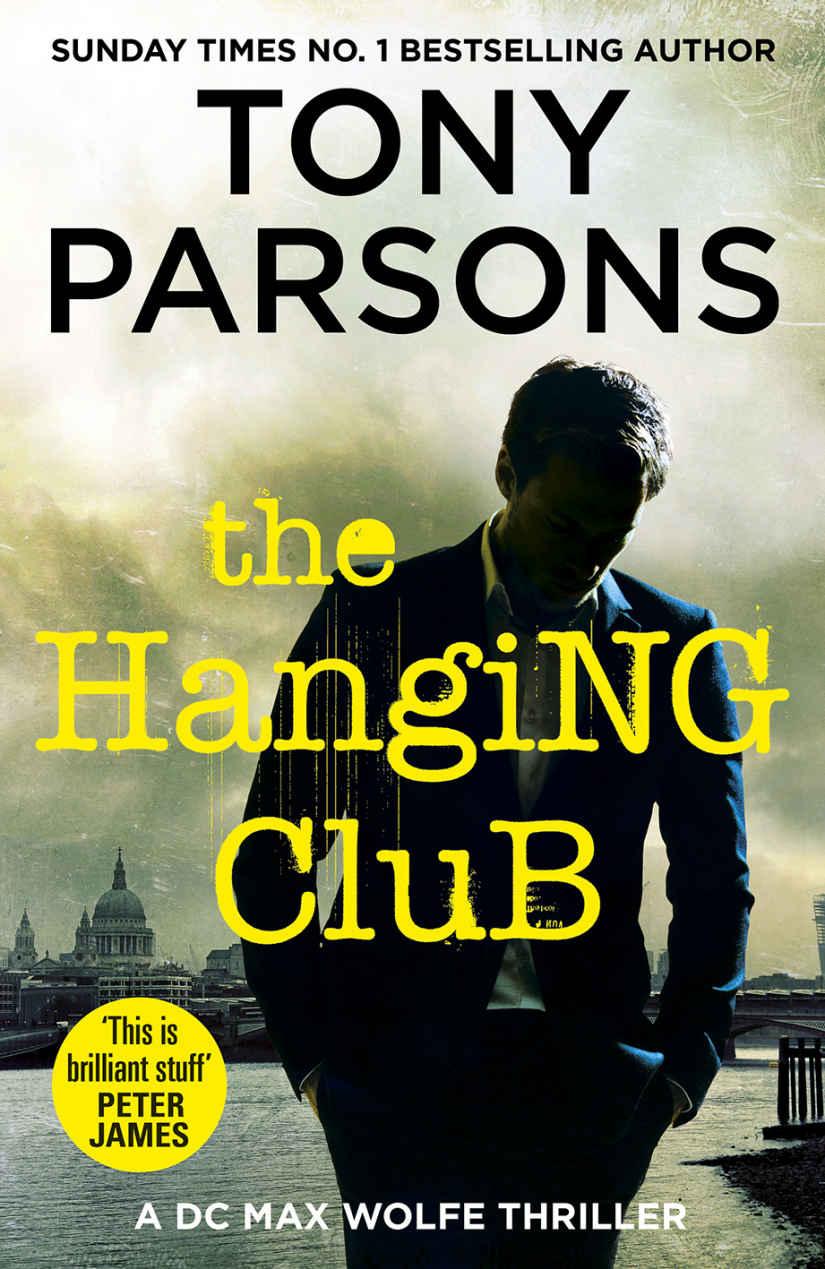 A band of vigilante executioners roam London’s hot summer nights, abducting evil men and hanging them by the neck until dead.

– The wealthy drunk driver who’s mowed down a child.

– The hate preacher calling for the murder of British soldiers.

As the bodies pile up and riots explode across the sweltering city, DC Max Wolfe hunts a gang of killers who many believe to be heroes.

And discovers that the lust for revenge starts very close to home . . .

Tony Parsons left school at sixteen and his first job in journalism was at the
New Musical Express
. His first journalism after leaving the NME was when he was embedded with the Vice Squad at 27 Savile Row, West End Central. The roots of the DC Max Wolfe series started here.

Since then he has become an award-winning journalist and bestselling novelist whose books have been translated into more than forty languages.
The Murder Bag
, the first novel in the DC Max Wolfe series, went to number one on first publication in the UK.
The Slaughter Man
was also a
Sunday Times
top ten bestseller.

Tony Lives in London with his wife, his daughter and their dog, Stan. 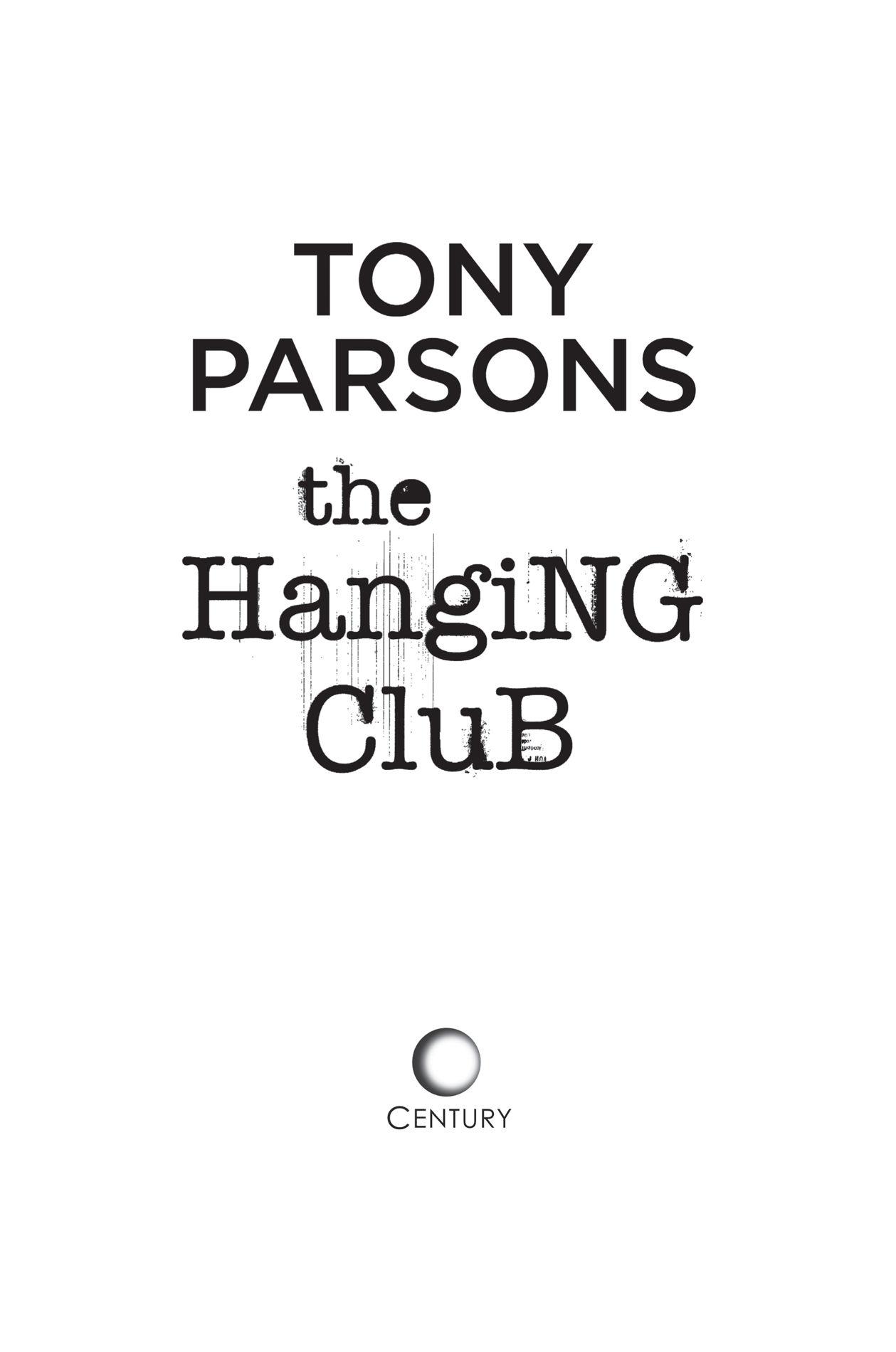 For Fred Kindall of Kentish Town

A great multitude had already assembled; the windows were filled with people smoking and playing cards to beguile the time; the crowd were pushing, quarrelling, and joking. Every thing told of life and animation, but one dark cluster of objects in the very centre of all – the black stage, the cross-beam, the rope, and all the hideous apparatus of death.

After Friday prayers Mahmud Irani walked back to where he had parked his taxi and within a few minutes he had picked up the man who was going to kill him.

The man was standing opposite the entrance to London Zoo, dressed in a suit and tie, the jacket buttoned up despite the steaming midday heat. His eyes were hidden behind dark glasses and he had one arm already raised in the air to hail a cab, as if he was fully expecting Mahmud to be driving round Regent’s Park’s Outer Circle immediately after prayers, as if he knew he was coming.

As if he had been waiting.

Mahmud pulled up beside him, smelling the animal stink of the zoo in summer.

The man nodded, glancing at his phone before showing it to Mahmud. On the iPhone’s screen there was a map of the City with a red marker pinpointing their destination.

Less than four miles away but it meant crossing the middle of the city in the stagnant traffic of lunch hour. Mahmud grunted his reluctant assent and watched the man slide into the back seat.

In silence they drove east through the sweltering city.

Mahmud was turning his taxi onto Newgate Street when he glanced in his rear-view mirror and saw the man removing a small leather credit-card holder. Mahmud sighed. How many times did you have to tell these stupid people?

‘
It’s cash only
,’ he repeated, harder this time, tugging at his polo shirt, the sweat sticking.

But the man was not getting out a credit card.

He leaned forward between the gap in the front seats and placed an old-fashioned razor blade firmly against Mahmud Irani’s left eyelid.

Mahmud drew in his breath and did not let it go.

He felt the thin cold steel of the blade’s cutting edge settle into the folds of soft flesh beneath his eyebrow. The fine layer of skin covering his eye fluttered wildly against the razor blade. Pure naked terror rose up inside him.

Mahmud drove as if in a dream, driving with one eye squeezed closed, trying to concentrate on the road ahead with a razor blade pressed against his eyelid.

Following the man’s directions, he drove to the end of the street and then turned left onto a huge building site. It was deserted, one of those little pockets of total silence and emptiness that suddenly surprise you in the city. Another tower of glass and steel was being erected here, but there was nobody working this afternoon. They were all alone. Ahead of them was a yawning hole in the uneven ground.

‘Down there,’ the man said.

‘I have a wife and children.’

The razor blade pressed more firmly into Mahmud’s flesh and he felt his eyeball move, a sick rolling feeling as the eye recoiled from the cutting edge. Mahmud drove into the hole and down, bumping over a speed bump and then over some random rubble before entering a vast basement twilight.

What was this place?

Mahmud could not tell if it had once been an underground car park or if that’s what it would be in the future. Right now it was simply a massive expanse of empty space with a very low ceiling; a subterranean basement with no lights apart from the shafts of summer sun coming in from somewhere.

‘Where are we going?’ Mahmud said, unable to stop himself talking, and this time the man slid the razor blade very gently across his eyelid, just one inch, but enough to cut into flesh and make Mahmud cry out from the shock of sudden pain.

A warm trickle of blood oozed slowly around the curve of Mahmud’s left eyelid.

And he did not speak after that.

They got out of the car and that was a moment when Mahmud thought he could run away if he was not so stricken with terror, so paralysed with disbelief that this was happening, so appalled by the warm blood that ran now on either side of his left eye, so scared witless that he did not fully register the chance to escape until the moment had passed.

Then the man stood behind Mahmud, the razor blade returned to the soft fold of flesh above the left eye and the man’s other hand gently taking the taxi driver’s wrist.

They walked across the wide-open space to a door.

They went down some steps.

The air got colder.

They descended into total darkness and walked along a narrow passage until suddenly a thin shaft of natural light was coming from somewhere high above their heads. Mahmud could see ancient white brickwork that
was stained green by time and weather. It was very cold now. The summer was on another planet. The air was fetid with what smelled like stagnant water. It was like stepping into another world.

And then there were the others.

Their faces hidden by black masks that revealed only their eyes.

One of them had a red light shining in their hands.

It was some kind of camera, and it was pointing at Mahmud Irani.

There was a stool. A kitchen step stool. Mahmud could not understand what was happening as hands helped him onto the stool and something was placed around his neck. The blood was in his eyes as he watched the man from the car consulting with the one who held the camera. Mahmud wiped away the blood with the palm of his hands and he tried to balance himself, afraid he would fall from the stool.

His fingers nervously felt his neck.

It was a rope.

They had put a rope around his neck.

He looked up and saw that it was attached to a rusted tangle of ancient pipes in the ceiling.

Hands were touching his arms. He heard a metallic click. He found that his arms were secured behind his back.

And now the words came in a torrent. Now he had no difficulty at all in speaking. Now even the razor blade pressed against his eyeball could not have shut his mouth.

‘I have a wife and children!’ he screamed, and his voice echoed back at him in this secret basement.

‘I’m just a taxi driver! Please! You have the wrong person!’

The man from the car was covering his face with a black mask. Like an executioner. He turned to Mahmud Irani.

‘
Do you know why you have been brought to this place of execution?
’ he asked.

Mahmud stuttered, ‘What? This – what? I don’t understand. What? I’m a taxi driver—’

But then the words choked in his throat because, beyond the red light of the camera, one of them was sticking A4 sheets of paper to the worn white bricks of this underground place.

The A4 sheets of paper were portraits that had been downloaded from the Internet.

They were all the faces of girls. Young girls. Smiling girls.