Confessions of a Naughty Night Nurse 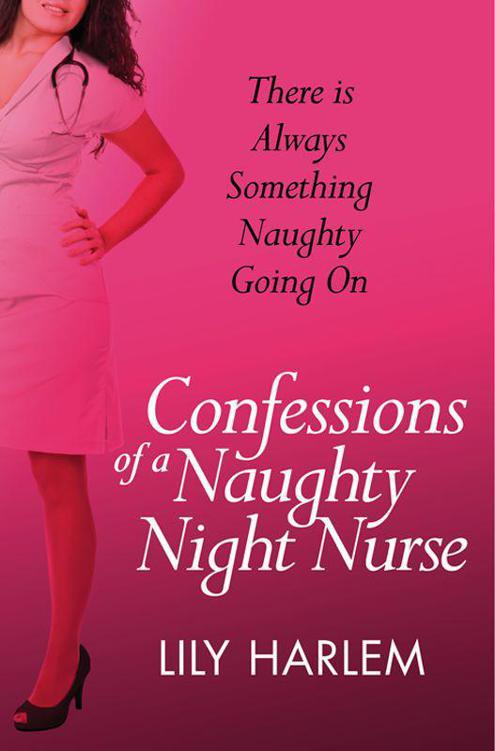 ‘Yep, bless him, it was peaceful, though.’

‘Yeah, so that should be us done for a while now; they come in threes.’

The two staff nurses talking over a body in sideward six were hunched forward, with shadows spreading out behind them. A tap dripped in the corner, a musty smell hung in the air, and the wind rattled past the lead-paned window.

I stepped closer and cleared my throat.

‘Sharon, are you here for us?’ Annie asked with a smile. Her auburn hair, roughly pinned in a bun, wobbled as she spoke.

‘Yes. Please say you’re expecting me. I’m fed up of being passed from pillar to post this week.’

‘Too right we are. We’re so short here tonight, and now this, another trip to Rose Cottage.’

I fastened my fob watch onto my uniform, just over my left breast. ‘I’ll go.’

She widened her eyes. ‘Are you sure? It’s bloody awful out there.’

I shrugged, feigning nonchalance. I never refused a trip to the mortuary – or Rose Cottage as it was known, so as not to offend delicate dispositions. ‘Yeah, whatever, I’m here to help out and I’ve got a coat.’

She glanced at her colleague, pulled down the edges of her mouth, then looked back at me. ‘Cheers then, that’s great.’

Her colleague, whom I didn’t know, but had Staff Nurse Nancy Tinkard written on a brass badge, tugged the sheet over the slackly wrinkled face on the bed, covering the unseeing, half-open eyes but leaving a tuft of grey hair sticking out. She reached up and turned off the saline drip. ‘We’ll give it the usual hour of respect before we come back in here then,’ she said.

‘Do you have a report card I can use?’ I asked.

‘Sure, I’ll get you one.’ Tinkard opened the window the tiniest crack, and a hiss of wind whistled in. She then stepped past me and out of the sideward.

I followed her up the dimly lit ward, a rise of anticipation growing in my belly and my pulse picking up a notch. Rose Cottage always meant a few minutes’ fun on an otherwise dull night. It wasn’t The Ritz and they didn’t bother with home comforts like mattresses and pillows for their guests, but hey, I could cope.

‘Have you just joined the hospital?’ I asked.

‘Yeah, moved up from Sheffield to live with my boyfriend in Skipton,’ she said over her shoulder.

‘It’s OK, apart from the fact it’s nearly ten and the house officers haven’t been round yet.’

‘I know, makes you wonder what they teach the junior doctors these days.’ I suppressed a laugh. Here ten would be early for house officers to make their final rounds. She must have been spoilt with eager, efficient doctors wherever she’d worked before.

We sat at a long white desk with a hidden artificial light shining from a plinth above onto the surface.

‘Here you go,’ she said, ‘we have a full house, well, apart from Mr Parslow’s bed when he’s gone.’ She passed me a sheet of paper with every resident on the geriatric ward, named, aged and diagnosed. ‘Then we’ll have one, for emergencies, but Heathcliff Ward have three empty, so if Iceberg, or whatever you lot call senior night nurse Lisa Stanton rings, be sure to tell her how busy we are here.’

‘Absolutely.’ I glanced down the list. There was no patient less than eighty-four and no one for resuscitation should they decide to stop breathing or their heart gave up.

He set his hands on the desk, stooped, and his red stethoscope swung from around his neck. ‘Covering for sickness,’ he said with a shrug.

‘About time you got here.’ Tinkard slapped several drug charts on the table next to his fingers. ‘We’ve got drugs to be written up, three warfarins, and now there’s one to pronounce too, in sideward six.’

Carl tugged his gaze from mine and flashed her one of his most charming smiles. ‘I’m really sorry. It’s been hell in A&E all afternoon and then I had to assist in surgery. Got to do the day job on top of the extra-curricular care-of-the-elderly fun.’

Tinkard tutted. ‘Well, what am I supposed to do now? Wake up my patients to take evening medication?’

‘Yeah, I suppose so.’ He straightened, pulled a black pen from his pocket, jabbed in the end and released the ballpoint with a flamboyant click. ‘You got the blood results then?’

Tinkard was already holding them in the air, wafting them like tissue paper.

He glanced at me and I knew he was doing his best to be patient. Behind his square, black glasses he had rings under his eyes, his tie was skew-whiff and there was a blob of what was either blood or Bolognese on his white coat. Goodness only knew how many hours he’d been on his feet.

Tinkard pulled a rattle of keys from her pocket and wandered off, towards the clinical room, her footsteps perfectly silent.

Carl took her vacated seat, folding his long body into the low plastic chair and tucking his knees beneath the desk. ‘You picked the short straw tonight then, working with “Nurse Happy”? God knows where she turned up from.’

‘She’s OK, she just cares about her patients.’

‘Yeah, I suppose. Trouble is I have to prioritise bleeding oesophageal varices over a few warfarin write-ups.’

‘Yeah, he’s in intensive care. Puts you off booze, though.’

‘Impressive by anyone’s standards.’ I glanced at my fob watch. ‘You got your car back yet?’

‘Yes, they managed to get the dink out of it without too much problem. Last time I go to the supermarket on a windy day, though. Bloody trolleys blowing about all over the place.’

‘You’ll be hungry then, this weather is set in for a few months. That’s how it is in the Dales.’ I tried and failed to stifle a yawn, waggling my hand in front of my mouth. ‘Sorry, I’m knackered, as usual.’

An image of him sprawled in bed, limbs tangled in sheets, hair messy, glasses off, came to my mind. I would eventually get into his bed with him, or have him up against a wall, over a trolley or even in a linen cupboard. Carl was a hottie in a nerdy-but-flirty kind of way, and we were playing an unspoken game of let’s-see-how-long-we-can-resist-banging-each-other-stupid. It was fun, this dancing around in a horny-doctor, sexy-nurse ritual. And let’s face it, he was fresh out of med school, five years of study, study, study, and now he’d been let loose in a hospital. He needed some action of the non-clinical variety and a lesson on how the land lay in the jungle.

A red light flashed on the dash screen, signalling a patient needed a nurse in bay four. Standing, I lightly pressed Carl’s shoulder. ‘See you later.’

He shoved his hand through his dark, slightly too-curly hair and looked up. ‘Hopefully not.’ He suddenly frowned. ‘Not that I don’t like seeing you, I do. But I really want to get some kip after this.’

As I walked away I knew he was checking out my bum. His gaze was hot on my buttocks and had been getting hotter ever since I’d accidently-on-purpose shown him the top of my black stockings last week when helping a patient out of bed. Now I didn’t need to showcase my hosiery to get him worked up, he knew it was there; ten denier sheerness, then delicate lace that was strikingly dark against my pale, sun-starved flesh.

‘I don’t know you.’ Mr Watkins’ big blue eyes peered up at me and his gnarled fingers clutched a starched sheet beneath his chin.

‘I’m Sharon, one of the nurses looking after you.’

‘Bronte Ward, where’s that?’ His hold on the sheet tightened and the bulging blue veins that threaded over the backs of his hands twitched.

‘You’re in hospital, on Bronte Ward.’

‘No, I’m not. I’m waiting … for them.’ He narrowed his eyes, the skin at the corners pinching, as he darted his gaze left to right. ‘I have a weapon, you know.’

I flicked on the night light, hoping it would help orientate him, and glanced at my report card to see if he had dementia. No, just a urine infection which often made older people confused until the antibiotics kicked in. ‘Who is them?’ I asked, smiling down.

I rested my hand over one of his and noted how cool his flesh was. ‘No one is coming here tonight, especially not Germans,’ I said. ‘Everyone is tucked up in bed and you’re quite safe.’

He hesitated. ‘Are you sure?’

‘Absolutely, now how about I get you a nice cup of tea?’

‘Can you do that? Are you allowed? What if the Germans see the light of the fire?’

‘Well, I would if it wasn’t rationed, six of the buggers. Nothing like sweet tea to get you through the night.’

I bit my lip to stop myself retorting that I enjoyed plenty of other sweet treats to get me through my working night. But I didn’t want to confuse Mr Watkins further.

‘Sharon, you said?’ He eyed me with a fraction less suspicion.

‘Sharon, that’s right. I’m here to look after you. Now how about that cup of tea?’ I straightened his pillow to support his neck better. ‘It will warm you up. You feel a bit chilly.’

‘Are you sure it’s safe to make tea?’

‘I’m sure.’ Not the first time in my career, I hated how those distant years affected soldiers when they reached their end days. ‘You really are safe here, nothing is going on tonight so I’ll go and put the kettle on and then maybe, in a little while, you’ll be able to settle down and get some rest.’ I reached for the blanket folded over the end of the bed, shook it out and laid it over him. ‘Is that OK?’

He studied my name badge with a lucidity in his expression I hadn’t seen a few moments ago. ‘Yes, that’s fine, Miss Sharon Roane.’

‘Great, I’ll be back in a jiffy with that tea and …’ I leaned in, conspirator-like, ‘I will make it as sweet as I can get away with.’

He twitched his mouth into a half smile. ‘You will?’

‘Just …’ He licked his dry lips. ‘Be careful, you never know when they might jump out at you.’

The moment of clarity was slipping. ‘I’ll be careful, don’t you worry.’

‘Yes, keep low, stay in the shadows and don’t give them any clues to your whereabouts.’

No Dawn for Men by James Lepore
Most Talkative: Stories From the Front Lines of Pop Culture by Andy Cohen
Captain of Rome by John Stack
A Play of Piety by Frazer, Margaret
Daddy's Game by Alleman, Normandie
The spinster and the wastrel by Louise Bergin
Raven: Sons of Thunder by Giles Kristian
Next to You by Julia Gabriel
¿Por qué es divertido el sexo? by Jared Diamond
A Spool of Blue Thread by Anne Tyler