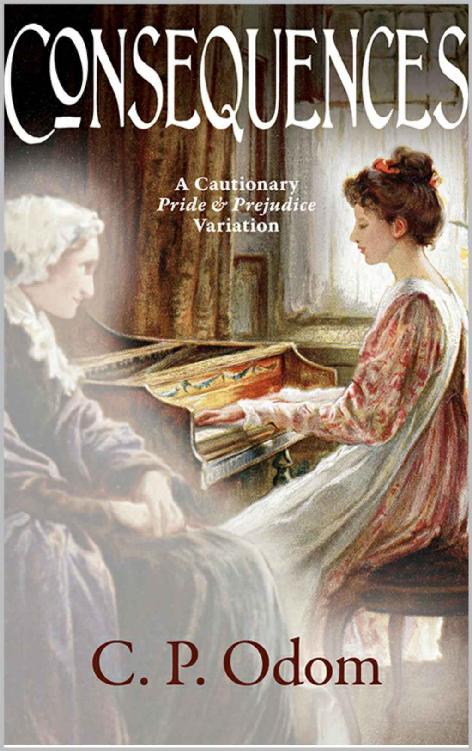 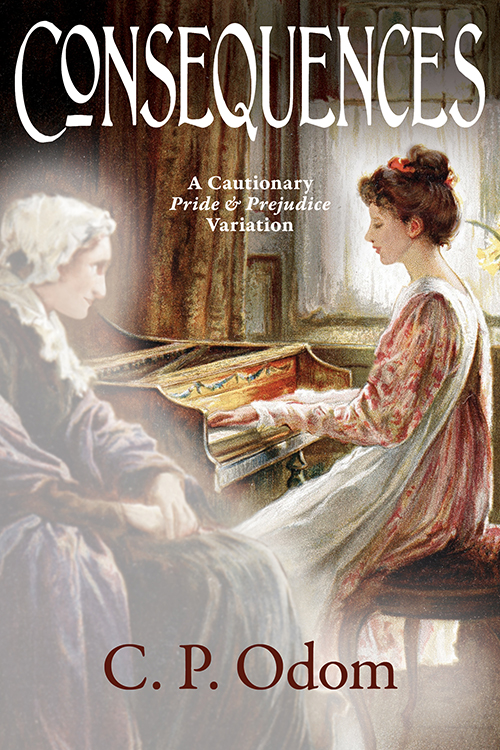 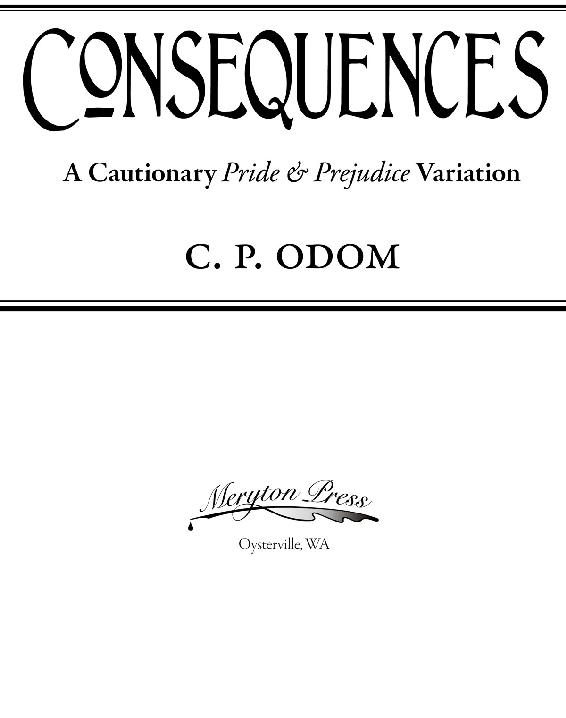 Also by C.P. Odom
A MOST CIVIL PROPOSAL

This is a work of fiction. Names, characters, places, and incidents are products of the author’s imagination or are used fictitiously. Any resemblance to actual events or persons, living or dead, is entirely coincidental.

All rights reserved, including the right to reproduce this book, or portions thereof, in any format whatsoever. For information: P.O. Box 34, Oysterville WA 98641

To my dear wife, Jeanine, for her unflagging support, and my daughters, Mikaelie and Taryn, for not rolling their eyes too much at the idea of their Dad writing in the world of Jane Austen.

With deep gratitude to my editors, Christina and Ellen, who helped keep this story authentic to both Jane Austen and to her times.

In addition, they found so
many
little grammatical boo-boos. And I used to think
I
was a grammar geek . . .

“The main thing history can teach us is that
human actions have consequences and that
certain choices, once made, cannot be undone.
They foreclose the possibility of making other
choices, and thus they determine future events.”

Charlotte Collins was engaged in inspecting her hens when she saw Mr. Darcy approaching the gate of the Parsonage, having come from the direction of Rosings Park. When he spied her, he greeted her in his usual polite but restrained manner, and she invited him to precede her to the house.

“I shall be there directly, Mr. Darcy,” she called. Turning to the servant who held the basket partially filled with eggs, she said, “I will finish here, Susan. Please go into the house and see the tea is set for our visitor. And please inform Miss Elizabeth and my sister that Mr. Darcy has called and I shall return to the house directly.”

Susan gave her mistress both the basket and a quick curtsey before running into the house, followed at a more reasonable gait by Mr. Darcy. Charlotte clucked her tongue disapprovingly, considering whether to admonish Susan yet again for running, but decided against it, for the young girl seemed naturally to break into a run whenever dispatched on an errand.

Of greater import to her was the thought of Mr. Darcy and his frequent visits to the Parsonage. After his first impromptu visit, she suggested to Elizabeth he must be in love with her, but her friend’s description of the way he sat so silently, unable or unwilling to talk, made the idea seem unlikely. Since then, Mr. Darcy and his cousin Colonel Fitzwilliam made almost daily visits to the Parsonage, sometimes together, sometimes separately, and even occasionally accompanied by their aunt.

Whatever Mr. Darcy’s motives, it was plain Colonel Fitzwilliam visited because he had pleasure in their society, a conjecture making him even more agreeable. Elizabeth remarked that his company was so affable and his admiration of her so evident, it reminded her of her former favourite, George Wickham. However, she continued, her assessment was that the good colonel appeared to have the better-informed mind, even if he did not have the same ability to captivate as did Mr. Wickham.

Charlotte had made no response to this evaluation since her own opinion of Mr. Wickham was much at variance with that of her friend.

In any case
, she thought, as she finished gathering the eggs,
I was thinking on Mr. Darcy and his reason for coming so often to the Parsonage. It is most difficult to decipher since he does not appear to come for the society. He frequently sits there for ten minutes without opening his lips, and when he does speak, it seems to be driven by necessity and not by choice — a sacrifice to propriety rather than a pleasure to himself.

The way in which Colonel Fitzwilliam occasionally laughed at Mr. Darcy, for what he termed his cousin’s stupidity, made it seem likely he was different on most other occasions. However, since she never witnessed such pleasant behaviour from Mr. Darcy, she had no way of validating that possibility. Charlotte would have liked to believe this change was due to love—and the object of his love, her friend Eliza—so she set herself the task of working it out. She watched him whenever they were at Rosings and whenever he came to Hunsford, but she had little success. He certainly looked at Elizabeth a great deal, but she had never been able to tell whether his earnest, steadfast gaze was due to admiration or absence of mind.

Of late, after she observed Mr. Darcy most carefully, she again suggested to Elizabeth the possibility of his being partial to her, but this suggestion met with no more agreement than previously. Her friend simply would not consider the suggestion seriously and always laughed at the idea. Charlotte did not press the subject on those occasions; she did not want to raise Eliza’s expectations for fear they might end in disappointment. In any case, she was not worried by Elizabeth’s oft-professed dislike of Mr. Darcy, for she was certain in her own mind that Elizabeth’s objections would vanish if she ever had reason to believe he might be in her power. On
that
point, she had no doubts whatever.

Book 1
The Road Not Taken

“The joys of love are but a moment long,
the pain of love endures the whole life long.”

“Of all pains, the greatest pain,
Is to love, and to love in vain.”

Fitzwilliam Darcy strode through Rosings Park as the afternoon faded into evening, and an observer would have testified to seeing a gentleman of means, secure in his consequence and intention. His long stride made rapid work of the journey from Rosings, the home of his aunt, Lady Catherine de Bourgh, to his destination of the Hunsford Parsonage, where her parson, Mr. Collins, lived with his wife, Charlotte. His bearing was confident, his face composed, and his tread was relaxed and fluid, as befitted a young man of eight-and-twenty in the prime of health and fitness.

But the observer would have missed the mark in several important areas, for this young man’s inner thoughts were in turmoil. For one, there was his destination of the Hunsford Parsonage, for he did not journey to see the parson or his wife, for they, along with Mrs. Collins’s sister, Miss Lucas, took tea at Rosings with his aunt. Rather, his interest was with Mrs. Collins’s other guest of the past few weeks, her lifelong friend from Hertfordshire, Miss Elizabeth Bennet, who was also cousin to Mr. Collins.

Darcy was confounded that his once orderly life had become so completely unsettled. In the matter of choosing a wife to secure his future, he knew that his duty to his family and himself was to select a young lady of breeding who would be able to enhance or solidify the stature or fortune of the Darcy name. His parents, especially his mother, always emphasized how careful he must be to choose the right lady and not to be led astray by trivial attractions or lures, which so often ensnared unwary young men. But both his parents had passed on a number of years previously, leaving him in possession of substantial properties and fortune.