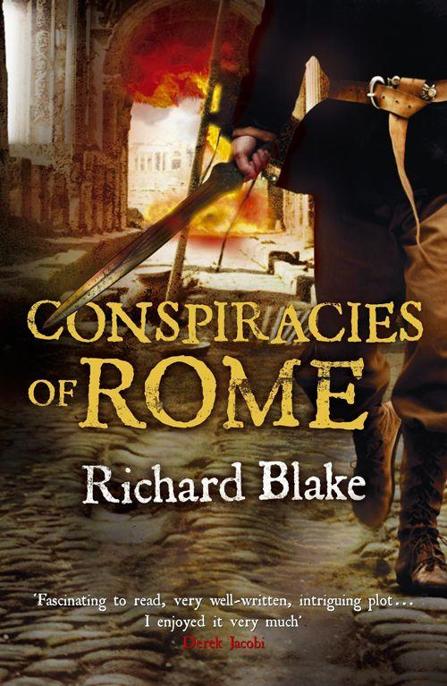 First published in Great Britain in 2008 by Hodder & Stoughton

First published in paperback in 2008

The right of Richard Blake to be identified as

the Author of the Work has been asserted by him

in accordance with the Copyright, Designs and

may be reproduced, stored in a retrieval system,

or transmitted, in any form or by any means

without the prior written permission of the

publisher, nor be otherwise circulated in any

form of binding or cover other than that in

which it is published and without a similar

All characters in this publication are

fictitious and any resemblance to real persons,

living or dead is purely coincidental.

A CIP catalogue record for this title is

available from the British Library

For my wife Andrea

The verses on p.127 are based on
A Letter from Italy, to the Right Honourable Charles Lord Halifax, in the Year 1701
, by Joseph Addison

The verses on p.222 are the opening lines from Book III of
De Rerum Natura
by Titus Lucretius Carus,
c
70
BC

The verses on p.289 are from Poem III by Gaius Valerius Catullus,
c
60
BC

I, Aelric of Richborough, also known as Alaric of Britain and by sundry other names throughout the Greek Empire and in the realms of the Saracens, in this six hundred and eighty-fourth year of our Lord Jesus Christ, and in the second year of the second Pope Leo, and in the twenty-fifth year of the fourth Emperor Constantine, and in my own ninety-fifth year, sit here in the monastery at Jarrow to write the history of my life.

And that’s as far as I got yesterday afternoon. I got called in, you see, to take over the mathematics class for that lunatic monk from Spain Abbot Benedict engaged against my advice. He’d been faint again from scourging himself – not a wise act at any time, let alone in this ghastly climate. By the time I’d remembered enough to cane into the boys, I was pretty knocked out. So I came back here to my cell to recover myself with hot beer and took to my bed.

When I woke this morning, I looked again at my opening, and thought to burn it. I didn’t feel up to continuing.

Am I at last going senile? Am I no longer good for extended composition? At my age, there’d be no shame in that. Far off in Canterbury, Archbishop Theodore is only eighty-eight, and is getting decidedly past it.

I’ll not deny my pretty boy looks are long gone. I saw my reflection a few days back, and I reminded myself of nothing so much as one of the unwrapped mummies they sell in Alexandria – brown teeth sticking through shrivelled lips, a few wisps of hair hanging at random from my scalp. The beauteous Alaric – or Aelric: call me what you will – whose face shone more brightly than the moon, is long gone.

But the great Flavius Alaric, Light of the North, Scholar of Scholars, author of histories, intelligence reports, libels, begging letters, flattery, smutty poems, and so much more – he remains very much still here, magnificent even in his external decay.

No – what had me holding up the sheet of papyrus over my little charcoal brazier was one of my very rare stabs of conscience.

‘Why don’t you write your life?’ Benedict asked me again the other day, after he’d watched me on my best behaviour in the advanced Latin class – that is, not ogling every boy without spots. ‘God has blessed you with so many years, and these have been crowded with so many worthy deeds. A full record would be so very
edifying
.’

Is Benedict wholly ignorant of all I’ve got up to in the past eighty-odd years? Since he lacks any noticeable taste for irony, I suppose he is. Perhaps it’s for the best if he remains ignorant.

Then again, a refugee does have some obligation to those who take him in. So, here I sit, a moth-eaten blanket over my knees, the rain falling in sheets outside my window, pen in hand. Benedict wants a full record of my life, and a full record he shall have. But since he said nothing about a comprehensible record, I will, my Latin opening aside, write in the privacy of Greek. If I am obliged at last to tell the whole truth about myself, I feel a coordinate obligation not to shock the sensibilities of my good if enthusiastic hosts.

I don’t know who you are, my Dear Reader, and I don’t know where or when you are. But I do suspect you will be less pained by the truth than good Benedict. And I do promise that the truth I shall write will indeed be the truth and nothing but the truth.

I begin my narrative of truth with that day early in the October of 608. I was eighteen and was seven months into my job as interpreter and general secretary to Maximin. He was a fat little priest from Ravenna who’d come over to join the work of the still rather new mission to claim England for the Faith.

‘I was sent here to fish for the souls of men,’ he said as he sat carefully down under a tree. ‘Clement brought over a whole village last month, and he does it by singing to the natives. I’ll not be outdone.’

He washed down an opium pill with his beer and looked at the sky. It hadn’t clouded over yet, and the day was looking set to be fine and warm till evening.

‘I think we should pray for the rain to hold off,’ he said. ‘I want a nice rich smell for when the people come by.’

‘Don’t you think, Reverend Father,’ I said, looking up from the job in hand – that is, rubbing our churl assistant all over with a dead cat – ‘they might recognise us? Word does get round, you know, about resurrections from the dead.’

‘Oh, think nothing of that,’ said Maximin with a stretch of his legs. He took another swig on his beer and leant confidentially forward. ‘We’re a good mile outside Canterbury. These are people who probably have no contact with the fishermen of Deal we ourselves fished for the Faith last Sunday. They’ve certainly never so much as heard of the miracle-working Maximin.’

He refrained from giving himself one of his little hugs and switched into broken English for the sake of the churl.

‘The Old Gods of your race, and of every other,’ he said, ‘are demons who have, through God’s High Sufferance, for the trial of man, transformed themselves into objects of worship. They must be driven out from your sacred groves back to the Hell to which they were confined after their Fall from Grace.’

Very likely! I thought. The Old Gods were just as much a fraud as the new one. ‘Keep still!’ I hissed at the churl while Maximin was looking at the sky again. ‘If this thing bursts and I get mess over me again, I’ll give you a right good kicking when we’re alone.’

‘Your Honour surely needs some time for sleeping,’ he mumbled slyly.

Maximin went back into Latin. ‘Do you think they might have some food with them when they come back from the fields? I’m beginning to feel rather hungry  . . .’