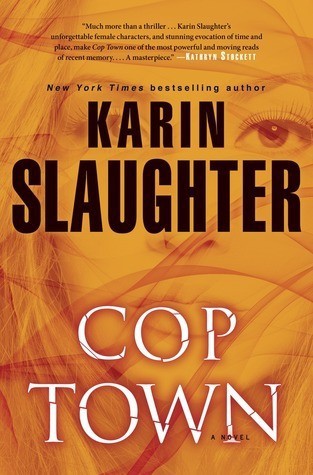 Cop Town
is a work of fiction. Names, characters, places, and incidents either are the product of the author’s imagination or are used fictitiously. Any resemblance to actual persons, living or dead, events, or locales is entirely coincidental.

DELACORTE PRESS and the HOUSE colophon are registered trademarks of Random House LLC. 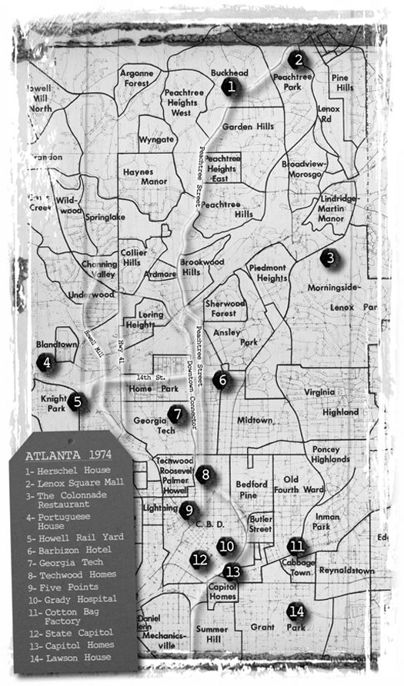 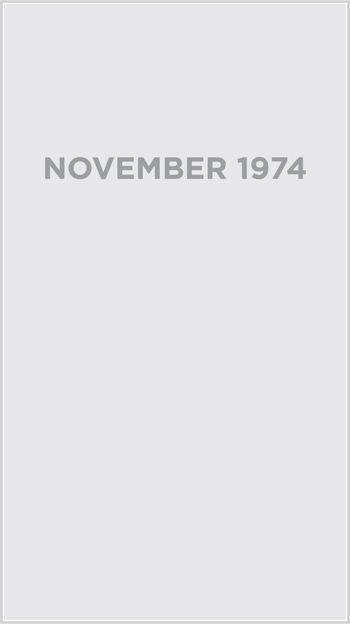 Dawn broke over Peachtree Street. The sun razored open the downtown corridor, slicing past the construction cranes waiting to dip into the earth and pull up skyscrapers, hotels, convention centers. Frost spiderwebbed across the parks. Fog drifted through the streets. Trees slowly straightened their spines. The wet, ripe meat of the city lurched toward the November light.

The only sound was footsteps.

Heavy slaps echoed between the buildings as Jimmy Lawson’s police-issue boots pounded the pavement. Sweat poured from his skin. His left knee wanted to give. His body was a symphony of pain. Every muscle was a plucked piano wire. His teeth gritted like a sand block. His heart was a snare drum.

The black granite Equitable Building cast a square shadow as he crossed Pryor Street. How many blocks had Jimmy gone? How many more did he have to go?

Don Wesley was thrown over his shoulder like a sack of flour. Fireman’s carry. Harder than it looked. Jimmy’s shoulder was ablaze. His
spine drilled into his tailbone. His arm trembled from the effort of keeping Don’s legs clamped to his chest. The man could already be dead. He wasn’t moving. His head tapped into the small of Jimmy’s back as he barreled down Edgewood faster than he’d ever carried the ball down the field. He didn’t know if it was Don’s blood or his own sweat that was rolling down the back of his legs, pooling into his boots.

The gun had snaked around the corner. Jimmy had watched it slither past the edge of a cinder-block wall. The sharp fangs of the front sights jutted up from the tip of the barrel. Raven MP-25. Six-round detachable box, blowback action, semiauto. The classic Saturday night special. Twenty-five bucks on any ghetto corner.

That’s what his partner’s life had come down to. Twenty-five bucks.

Jimmy faltered as he ran past First Atlanta Bank. His left knee almost touched the asphalt. Only adrenaline and fear saved him from falling. Quick bursts of recall kept setting off colorful fireworks in his head: Red shirtsleeve bunched up around a yellow-gold wristwatch. Black-gloved hand holding the white pearl grip. The rising sun had bathed the weapon’s dark steel in a bluish light. It didn’t seem right that something black could have a glint to it, but the gun had almost glowed.

And then the finger pulled back on the trigger.

Jimmy knew the workings of a gun. The 25’s slide was already racked, cartridge in the chamber. The trigger spring engaged the firing pin. The firing pin hit the primer. The primer ignited the gunpowder. The bullet flew from the chamber. The casing popped out of the ejection port.

The gun had jammed. Otherwise, Jimmy wouldn’t be running down
the street right now. He would be face down in an alley beside Don, condoms and cigarette butts and needles sticking to their skin.

Jimmy had never been on the business end of a firing gun. The flash was an explosion of starlight—millions of pinpricked pieces of sun lighting up the dark alley. His eardrums rang with the sound. His eyes stung from the cordite. At the same time, he felt the splash against his skin, like hot water, only he knew—he knew—it was blood and bone and pieces of flesh hitting his chest, his neck, his face. He tasted it on his tongue. Crunched the bone between his teeth.

He was blinded by it.

When Jimmy was a kid, his mother used to make him take his sister to the pool. She was so little back then. Her skinny, pale legs and arms poking out of her tiny suit reminded Jimmy of a baby praying mantis. In the water, he’d cup his hands together, tell her he’d caught a bug. She was a girl, but she loved looking at bugs. She’d paddle over to see, and Jimmy would squeeze his hands together so the water would squirt into her face. She would scream and scream. Sometimes she would cry, but he’d still do it again the next time they were in the pool. Jimmy told himself it was all right because she kept falling for it. The problem wasn’t that he was cruel. The problem was that she was stupid.

Where was she now? Safe in bed, he hoped. Fast asleep, he prayed. She was on the job, too. His little sister. It wasn’t safe. Jimmy could end up carrying her through the streets one day. He could be jostling her limp body, careening around the corner, his knee brushing the blacktop as the torn ligaments clashed like cymbals.

Jimmy saw a glowing sign up ahead: a white field with a red cross in the center.

He wanted to weep. He wanted to fall to the ground. But his burden would not lighten. If anything, Don got heavier. The last twenty yards were the hardest of Jimmy’s life.

A group of black men were congregating under the sign. They were dressed in bright purples and greens. Their tight pants flared below the knee, showing a touch of white patent leather. Thick sideburns. Pencil mustaches. Gold rings on their fingers. Cadillacs parked a few feet away. The pimps were always in front of the hospital this time of morning. They smoked skinny cigars and watched the sun rise as they waited for their girls to get patched up for the morning rush hour.

None of them offered to help the two bloody cops making their way toward the doors. They gawked. Their cigarillos stopped midair.

Jimmy fell against the glass doors. Someone had forgotten to lock them. They butterflied open. His knee slued to the side. He fell face-first into the emergency waiting room. The jolt was like a bad tackle. Don’s hipbone knifed into his chest. Jimmy felt the flex of his own ribs kissing his heart.

He looked up. At least fifty pairs of eyes stared back. No one said a word. Somewhere in the bowels of the treatment area, a phone was ringing. The sound echoed through the barred doors.

The Gradys. Over a decade of civil rights hadn’t done shit. The waiting room was still divided: black on one side, white on the other. Like the pimps under the sign, they all stared at Jimmy. At Don Wesley. At the river of blood flowing beneath them.

“It’s okay,” Jimmy managed, though he knew it wasn’t okay. Would never be okay. “It’s all right.”

Jimmy’s gut twisted at the sound. He’d been sure the man was dead. “Get help,” he told the crowd, but it was a whisper, a begging little girl’s voice that came out of his own mouth. “Somebody get help.”

Don groaned. He was trying to speak. The flesh of his cheek was gone. Jimmy could see his tongue lolling between shattered bone and teeth.
“It’s okay.” Jimmy’s voice was still a high whistle. He looked up again. No one would meet his gaze. There were no nurses. No doctors. No one was going to get help. No one was answering the damn telephone.

Winter of the Ice Wizard by Mary Pope Osborne
The Swiss Family RobinZOM (Book 5) by Perrin Briar
Love Me Like A Rock by Amy Jo Cousins
The Sheikh's Destiny by Olivia Gates
The Monster Hunter by Kit Cox
Muslim Fortresses in the Levant: Between Crusaders and Mongols by Kate Raphael
Origins of the Universe and What It All Means by Carole Firstman
The Hitwoman and the Neurotic Witness by Lynn, J. B.
Thought Manipulation: The Use and Abuse of Psychological Trickery by Sapir Handelman
The Other Language by Francesca Marciano