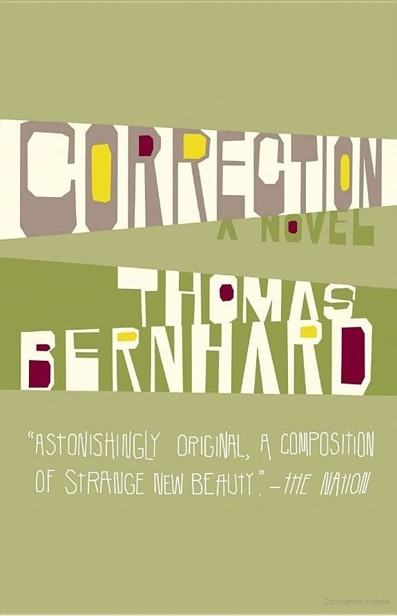 The scientist Roithamer has dedicated the last six years of his life to “the Cone,” an edifice of mathematically exact construction that he has erected in the center of his family’s estate in honor of his beloved sister. Not long after its completion, he takes his own life. As an unnamed friend pieces together—literally, from thousands of slips of papers and one troubling manuscript—the puzzle of Rotheimer’s breakdown, what emerges is the story of a genius ceaselessly compelled to correct and refine his perceptions until the only logical conclusion is the negation of his own soul.
Considered by many critics to be Thomas Bernhard’s masterpiece,
Correction
is a cunningly crafted and unforgettable meditation on the tension between the desire for perfection and the knowledge that it is unattainable.

TRANSLATED FROM THE GERMAN BY

to whom this translation is indebted for

This is a Borzoi Book published by Alfred A. Knopf, Inc.

All rights reserved under International and Pan-American

Copyright Conventions. Published in the United States by

Alfred A. Knopf, Inc, New York, and simultaneously in Canada

by Random House of Canada Limited, Toronto. Distributed by

A body needs at least

not in a straight line,

to fix its position,

After a mild pulmonary infection, tended too little and too late, had suddenly turned into a severe pneumonia that took its toll of my entire body and laid me up for at least three months at nearby Wels, which has a hospital renowned in the field of so-called internal medicine, I accepted an invitation from Hoeller, a so-called taxidermist in the Aurach valley, not for the
end
of October, as the doctors urged, but for
early
in October, as I insisted, and then went on my own so-called responsibility straight to the Aurach valley and to Hoeller’s house, without even a detour to visit my parents in Stocket,
straight
into the so-called Hoeller garret, to begin sifting and perhaps even arranging the literary remains of my friend, who was also a friend of the taxidermist Hoeller, Roithamer, after Roithamer’s suicide, I went to work sifting and sorting the papers he had willed to me, consisting of thousands of slips covered with Roithamer’s handwriting plus a bulky manuscript entitled

Actually I too found the atmosphere in Hoeller’s house ideal, I immediately made myself at home in the garret which had been Roithamer’s garret and will always remain Roithamer’s garret, from the very start I had always intended to take notes on my work with Roithamer’s papers and on the entire process involved, and I soon understood how perfect for Roithamer’s purposes Hoeller’s garret was, how he had settled into Hoeller’s garret with its view to westward, pitch-dark it was over the raging Aurach, and to northward, also pitch dark, the water steadily and always noisily slapping and crashing against the wet, glistening rock-face, “rehearsing for Altensam in Hoeller’s house” as he called those stays in Hoeller’s house, specifically Hoeller’s garret, stays that quickly succeeded one another in those last years, especially
the last three years
, when he went five or six times, for four or five months at a time, from England to Altensam, but actually only to Hoeller’s garret, obviously attracted to it by Hoeller’s work, those meticulous preservations of animals, and in general by all the curious conditions of the place, so intimately bound up with the play of light in the Aurach valley, where every day ran its course simply enough, but nature was always making itself so powerfully felt, a nature mostly in pain, and all the people there, Hoeller’s parents and in-laws and his wife and his still school-age children, for whom everything turned on what game had been shot and gutted, what wildfowl shot and gutted, and all the related chores, all the circumstances of life were bound up with their natural surroundings, it became clear to me that Roithamer had found here in the Aurach gorge as he had nowhere else the inspiration for pressing on with his main task, the building of the Cone, that edifice as a work of art, which he had designed for his sister in three years of incessant mental concentration and which he had built in the following three years with the greatest effort, with what he called almost inhuman energy, built it in the very center of the Kobernausser forest. It was in Hoeller’s garret, where I had now moved with Roithamer’s papers, most of them relating to the building of the Cone, and I regard my work on Roithamer’s papers as the ideal occupational therapy for myself after my long illness and
also feel it is ideal
, it was here that Roithamer had conceived the idea of the Cone and drawn up the basic plans for it, and the fact that even now, some months after Roithamer’s death and half a year after his sister’s death, his sister for whom he had built the Cone which is already abandoned to natural decay, Hoeller’s garret still contains all the plans, all the books and articles, most of them never used but all of them collected by Roithamer in his last years with a view to building the Cone, all those books and articles in every possible language, including languages unknown to him but translated for him by his brother Johann who spoke many languages and in fact had a gift for languages like no other man I ever knew, the translations were also here in Hoeller’s garret, and I could see at once that there had to be hundreds of them, stacks of translations from Spanish and Portuguese, as I noticed when I entered the garret, hundreds if not thousands of laborious decipherments of probably important considerations for the construction and completion of the Cone by experts unknown to me but probably familiar to him, he hated the word
architect
, or
architecture
, he never said
architect
,
or architecture
, and
when
I or someone else said architect, or architecture, he instantly countered by saying that he could not stand hearing the word architect, or architecture, that these two words were nothing but malformations, verbal monstrosities which no thinking man would stoop to, and I never used the words architect, or architecture, in his presence, nor have I used them since, even Hoeller got accustomed to avoiding the words architect or architecture, like Roithamer we resorted to words such as master builder or building or the art of building; that the word B U I L D is one of the most beautiful in the language, we knew ever since Roithamer had spoken about it, in that same garret where I have now installed myself, one dismal rainy evening when we again, as so often, dreaded the onset of another one of those torrential floods that come tearing down the gorge to devastate the whole area sometimes, though this one receded unexpectedly, those floods in the Aurach gorge would do the most extensive damage but they always spared Hoeller’s house, all up and down the Aurach they did the most extensive damage but Hoeller’s house, which was built right into the cleft, was spared always, because Hoeller had known exactly what he was doing, everyone was amazed to see the whole Aurach valley buried in mud, ravaged and destroyed while Hoeller’s house alone stood unscathed, incredibly, it was on this dismal rainy evening, with all of us living in fear of another such flood about to bemire and ravage everything in its path, though this time it did not happen, when Roithamer revealed to us the beauty of the word
building
and the beauty of the word
build
and the beauty of the phrase
builder’s
masterwork
. From time to time he would pick out a word like that, a word that had suddenly become luminous with meaning for him, pick out one word from among all those others, any word at all, and elucidate it to anyone, but usually to those of us who often came in the evening to Hoeller’s house and always regularly on those weekends when Roithamer returned from England.

The Prefect by Alastair Reynolds
Shadows on a Sword by Karleen Bradford
Close Up the Sky by Ferrell, James L.
Highland Hearts 03 - Crimson Heart by Heather McCollum
El gran espectáculo secreto by Clive Barker
Unbearable (the TORQUED trilogy Book 2) by Shey Stahl
The Maverick's Bride by Catherine Palmer
Billionaire on Board by Dasha G. Logan
Through a Crimson Veil by Patti O'Shea
This Will Be Difficult to Explain and Other Stories by Johanna Skibsrud